Editorial And Featured Aquarium: The Aquarium Of Terry Siegel

Despite the fact that I have written about, in my editorials, various aspects of my reef keeping experiences over the years, aquarists have asked me to update my adventures in our hobby – see email below. So, I decided to do the Featured Aquarium for the next two issues of the Advanced Aquarist. In this issue I’ll focus on the animals I now have in my 10-foot reef tank, which with the sump and refugium holds about 700-gallons of artificially made seawater. In the next issue I’ll focus on the equipment, water motion, feeding, water changes, lighting, etc.

There are many magnificent reef tanks kept by hobbyists and professionals today, many of which are far more beautiful than mine. If I have any distinction, it is in the length of time that some of my animals have been with me. Although I had been keeping reef fish in fish only tanks since the late nineteen sixties, I set up my first “modern” reef tank in 1983. I say modern because in the early seventies I had a 125-gallon invertebrate tank where I had modest success with nonphotsynthetic invertebrates. In those days I didn’t even know what a photosynthetic invertebrate was. Keeping hermatypic corals was thought impossible then – how the times have changed. Just yesterday I trimmed out of my Acropora colonies a bucketful of branches to be given to the LFS. As most of you know, when the conditions are right Acropora grows like a weed.

Have a 200g reef which I intend to enter in the plethora of “Tank of the Month” sweepstakes across the web… your publication first… after I retire from the military and have time to submit a winner! (still a few years out…)

Anyway… I am sort of a contemporary (30 years in the hobby) and have followed most of your published work thru out the years… was wondering if you have a list of your current collection of fish published anywhere? From what I can recall, I suspect you have a 300g display tank (?) w/ other secondary fuges, etc. integrated into the system.

I am a very careful collector and go to great lengths to research every specimen before the decision is made to add one or a pair to my tanks. And, like you I have an affinity for Tangs.

So, was wondering if you could share how many and what fish you have in your system? I take your system to be one of the reference standards out there. It is a sample of what can be done with the right study, husbandry, dedication, etc. etc. you know what I mean. I have many pictures that you have published so I am already aware of many in your almost “one of a kind” collection… just wanted to see what other specimens you have been able to integrate into the whole.

If you are otherwise too busy, or have reservations about this, I understand, but you know what they say… “It does not hurt to ask”.

Thank-you for all your contributions to our favorite pastime!

It seems logical to start with my oldest animals and move forward in time from there.

My first reef was a 90-gallon tank (set up in 1983), illuminated by quartz security lights, into which I added a pair of tomato clowns. One cantankerous Amphiprion frenatus survives to this day, making it 21 plus years in captivity. During most of its years it has made my Euphyllia ancora its home. 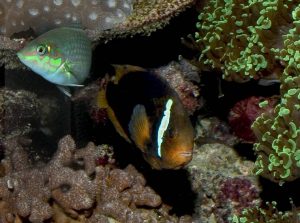 My Euphyllia ancora has been with me for about 20-years, during which time it has grown from a 3-inch fragment to an animal that has a diameter of about 2-feet, in spite of the fact that I have broken off sections for trade. 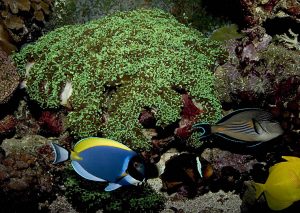 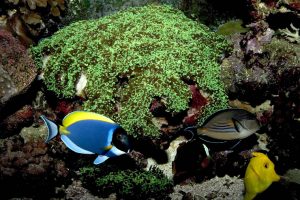 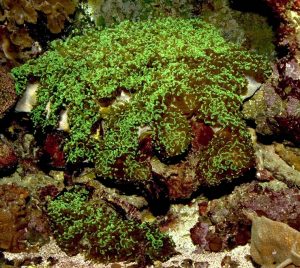 In 1986 I set up my second reef, a 150-gallon tank. During that year I added several surgeonfish that survive to this day: Zebrasoma flavescens and Zebrasoma desjardinii. They have been my guests for 18 plus years. 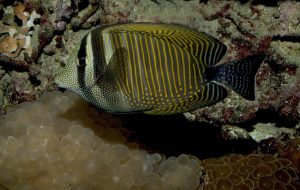 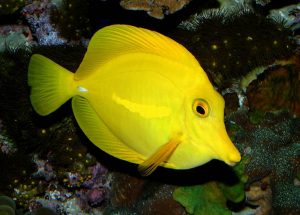 Sometime in the late 1980s Joe Yaiullo, who had set up a 200-gallon reef tank in the basement of the New York Public Aquarium gave me a 4 polyp colony of Blasstomussa merleti. I still have it today. As an interesting side note the curators at the New York Public Aquarium insisted that what Joe was doing in the basement tank was impossible, that he was sneaking in new animals every day to make his man made reef look good. How times have changed; now most public aquaria have reef displays. 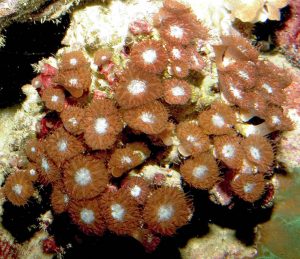 Sometime in the early 1990s I set up my third reef, a 220-gallon tank. This was to be the last reef tank I set up in Brooklyn, NY. The last major innovation was to have all three tanks drain into a common sump in the basement. At the end of 1998 I moved to Cape Cod, where I set up the current 10-foot tank, to which I transferred all the animals. In the 220, I raised a juvenile Pomacanthus navarchus and Lienardella fasciata to maturity. Both have been with me for better than 10-years. Also around this time I added a Acanthurus leucosternon, and a Acanthurus Achilles, one in the 220 and the other in the 150. When I moved and they found themselves in the same 10-foot reef tank they divided the tank up. The Achilles on the left and the leucosternon on the right. About a year ago the Achilles jumped out, and about a month ago I got a new Achilles. I made sure to get an Achilles twice the size of the leucosternon, which was established. It’s only in the last few days that the Achilles is able to hold its ground with the smaller fish. I have to confess that Achilles are my favorite fish, but can be a problem to feed, especially large specimens. However, they usually can be started feeding with sheets of nori tied to a rock or the like. I have also found that they will accept OSI marineflakes, and not other flake food. I suspect it’s because OSI has a very strong smell. Unless you have a special reason for getting a mature fish get a juvenile, like the one I had for 10-years. In general, juveniles are more adaptable, but need to be fed more often. 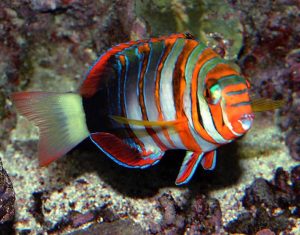 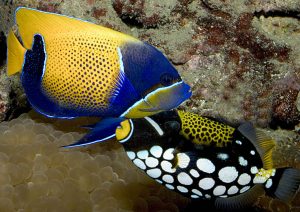 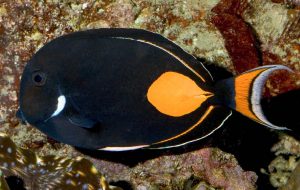 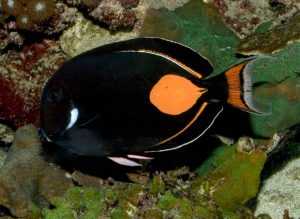 I collected this Muricea sp with Julian Sprung and Peter Wilkens around 1994 while diving in the Bahamas. I’m not sure of its identification, but it’s in the Plexauridae family. It was also around this time that Alf Nilsen came to the US and at a LFS insisted that I buy a nondescript brown fragment. He was right; it grew into this wonderfully emerald green encrusting Echinophyllia sp. And around this time I added to my 220 a small Leptoseris sp fragment. As you can see it has grown into beautiful plating coral. It is content to be near the bottom of the tank, where it receives relatively low light. 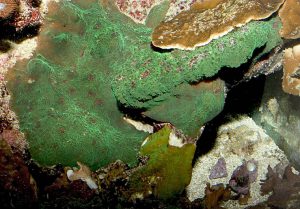 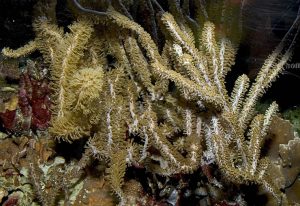 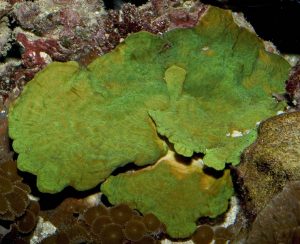 I don’t remember when I got a small fragment of green Stylophora sp – it was some time in the mid 1990s. It grew quickly, but really took off when given more room in my 10-foot tank. It now measures 30-inches across. The same is true for the Plerogyra sinuosa pictured here with a Balistoides conspicillum and Pomacanthus maculosus. The clown trigger has tripled in size since I get at a MACNA over a year ago, and the maculosus was given to me to save it by a LFS. It was in terrible shape, but several months in my refugium where it had plenty to eat brought it around, allowing me to transfer it to the display tank. 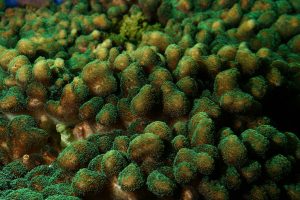 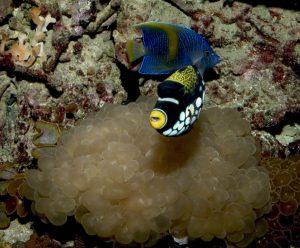 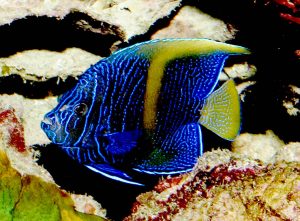 The tank is filled with Acroporas that were given to me as fragments over the years and grew into colonies. Here are pictures of some of them. The green Acropora fragment came from Greg Schiemer’s beautiful reef tank. 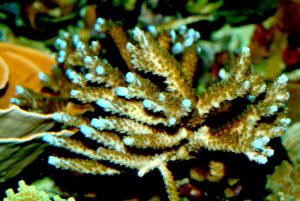 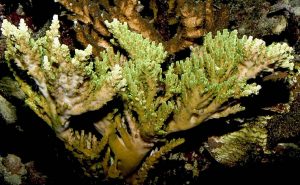 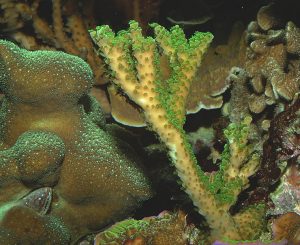 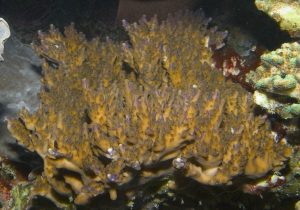 The bottom of the tank is covered with mushrooms, button polyps, Fungia sp (babies of a mother colony that died), and Pavona sp. 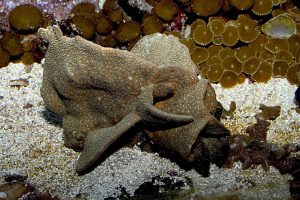 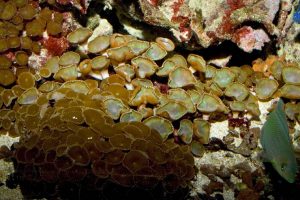 Without a wide angle lens I found it difficult to photograph the whole tank, so here it is in sections. There are more animals not shown here, and next issue I’ll include those. 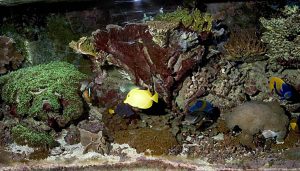 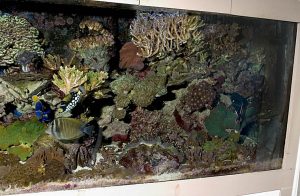 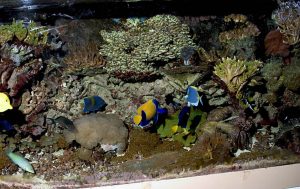