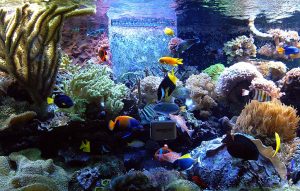 The Majestic Angelfish (Pomacanthus navarchus) is about to join the other fish at the feeding clip in this picture from the author’s 500 gallon reef aquarium.

I just can’t resist experimenting with angelfish in my reef aquariums. I was in Florida recently for a speaking engagement and had a chance to visit a number of private reef aquariums in the Ft. Lauderdale area. There must be more large angelfish in reef aquariums in this area than any other place in the country. It seemed that every reef aquarium contained at least one or more angelfish. When I came back to New York I got the itch again to add another angelfish to my reef aquarium. I knew it would be one of the Pomacanthus angels, but which one? I narrowed my choices down to the Emperor Angelfish (P. imperator), Blue-Faced Angelfish (P. xanthometopon) and Majestic Angelfish (P. navarchus). They all can be kept in reef aquariums with some limitations. Based upon my past experiences and observations, I determined that the Majestic Angelfish was the safest choice. It’s the only Pomacanthus angelfish that I’ve repeatedly witnessed co-existing with LPS (Large-Polyped Stony) corals and clams, as well as with many soft corals, such as Xenia and Zoanthids. I have a wide selection of corals and clams in my largest reef aquarium, so if an angelfish is prone to pick at a particular coral, it can probably find it in this aquarium. And I was prepared to remove a coral or two from the aquarium, if the angelfish took a liking to it. If my aquarium was limited to strictly SPS (Small-Polyped Stony) corals, then I would have had a wider choice in angelfish. Most of the Pomacanthus angels do well in SPS coral reef aquariums. The Emperor Angelfish (Pomacanthus imperator) is a favorite with reef aquarists keeping SPS coral tanks. 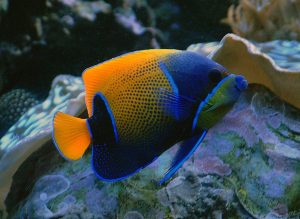 The author’s Majestic Angelfish (Pomacanthus navarchus) is cruising by a large Tridacna derasa clam in his reef aquarium.

The Majestic Angel is one of 13 species in the genus Pomacanthus. It enjoys a widespread distribution throughout the Indo-Pacific Ocean as well as parts of the eastern Indian Ocean. It does not occur in the South Pacific or Red Sea. It is naturally found in areas rich in coral coverage from lagoons to outer reefs. Juveniles tend to remain in more shallow protected areas while adults can be seen as deep as 120 feet. Their natural diet is comprised primarily of sponges and tunicates.

The adult Majestic Angelfish is a brilliantly colored fish. The juvenile fish, similar to many of the Pomacanthus angelfish, is mostly blue in color with white stripes. It begins to transform into adult coloration at a relatively small size (~2 1/2 inches). The Majestic Angelfish is one of the smaller species of the genus and reaches a maximum adult size of approximately 10 inches. It rarely attains this size in the aquarium and is a slow grower; although they are reported to live over 21 years!

Majestic Angelfish are often seen in pairs on the reef but also occur alone. They cannot be reliably sexed at any size so it’s difficult to form pairs in the aquarium. The only sure way to know if you have a compatible pair is to slowly introduce two specimens to one another and observe their interactions. One aquarist I met came up with an ingenious idea for creating pairs of angelfish in his reef aquarium. He places the newest angelfish in a basket made of egg crate (acrylic fluorescent light diffuser material). The basket is left hanging in the main aquarium for a few weeks so that the potential mates can interact but not damage one another. As long as he doesn’t observe any overt aggression between the fish, he releases the captive fish into the main aquarium. He tells me that he’s had a good ratio of success in establishing angelfish pairs with this technique. 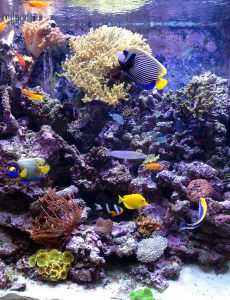 Although some of the Pomacanthus angelfish have been reared in captivity (P. maculosus & P. asfur), the Majestic Angelfish is not one of them. Adult Majestics will display courting behavior in the aquarium but it must be a large and deep aquarium of at least 180 gallons. They spawn as they ascend in the water column. The male and female encircle each other and simultaneously release eggs and sperm at the top of their ascent.

Although the Majestic Angelfish is one of the smaller “large” angelfish, it still requires an aquarium of at least 90 gallons to comfortably grow into an adult. A 135 gallon or larger aquarium is necessary to keep an adult pair. They’re best maintained in reef aquariums or “reef-type” aquariums. By “reef-type” aquarium I mean one that is decorated with live rock and maintained as if it housed a compliment of corals. Temperature, salinity and alkalinity should all be kept at natural reef levels. These are sometimes called FOWLR (Fish Only With Live Rock) aquariums. Although lighting is not critical, again I’d recommend reef-type lighting. Majestic Angels maintained under dim lighting in sparsely decorated or “sterile” aquariums often develop HLLE (Head and Lateral Line Erosion). Substrate in a Majestic Angelfish aquarium is optional, but personally I like a two-inch deep bed of calcium-based sand for it’s aesthetic value and because it helps foster the growth of small life-forms that add nutritional value to the aquarium.

Majestic Angelfish are generally not picky eaters but can sometimes be difficult to get started eating in the aquarium, especially larger adults. If necessary, use live brine shrimp on a temporary basis to entice them to eat. Frozen Mysis shrimp may also stimulate their appetites and makes a good staple food. Clams on the half shell are very tempting, as well as red macroalgae secured by a clip or attached by rubberband to a rock. Angelfish are used to eating sponges and other encrusting invertebrates, so this is a nutritious and natural-appearing food item. 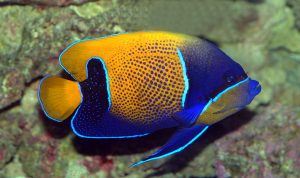 A close-up of a Majestic Angelfish (Pomacanthus navarchus) in adult coloration.

The Majestic Angelfish is one of the more mellow Pomacanthus angels and usually does not display aggression towards its tankmates, with the possible exception of other large angels and conspecifics introduced after it has established itself. My Majestic Angelfish shares a reef aquarium with a Flame Angelfish (Centropyge loriculus) and an Eibl’s Angelfish (C. eibli) and it completely ignores them. In turn, it was completely ignored by my existing tangs, including a large Powder Blue (Acanthurus leucosternon) and Clown Tang (A. lineatus), when I first introduced it into my reef aquarium. This surprised me a bit because these fish are generally aggressive towards new additions. I surmise that they didn’t perceive the angelfish as a threat to their food supply. In addition, this angelfish has a very different body shape and coloration relative to the tangs. These characteristics are also cues that elicit aggression between fish.

As with all new fish, I suggest keeping the Majestic Angelfish in a quarantine aquarium prior to introducing it into to the display tank. Although they aren’t particularly susceptible to parasitic infections, they are sensitive fish that can develop bacterial infections and occasionally suffer from eye flukes. A period in quarantine will give you an opportunity to look for these potential problems and treat them properly should they arise. 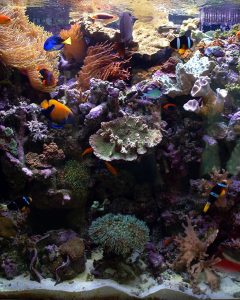