By Advanced Aquarist 8 years ago

I would like the thank Advanced Aquarist for selecting my planted aquarium as a featured aquarium.  It’s very exciting to be able to share this setup with fellow hobbyists.

I have been involved with aquaria for the better part of my life and have always been a gear-head (both in the hobby and out). Up until recently I kept a very successful 265 Gallon reef with enough equipment to automate the entire thing. Unfortunately, real life got in the way and a series of events led to the dismantling of my elaborate contraption. I parted out the tank, packed up all of my equipment and put it all in storage. Fast forward one year and I found myself desperately missing having an aquarium.

So what does a former reefer do with piles of equipment and no time or space to set up a reef tank? The answer for me was simple: high tech planted tank. I’ve been keeping planted tanks since about 2002, but took a lengthy hiatus when the reef bug bit. 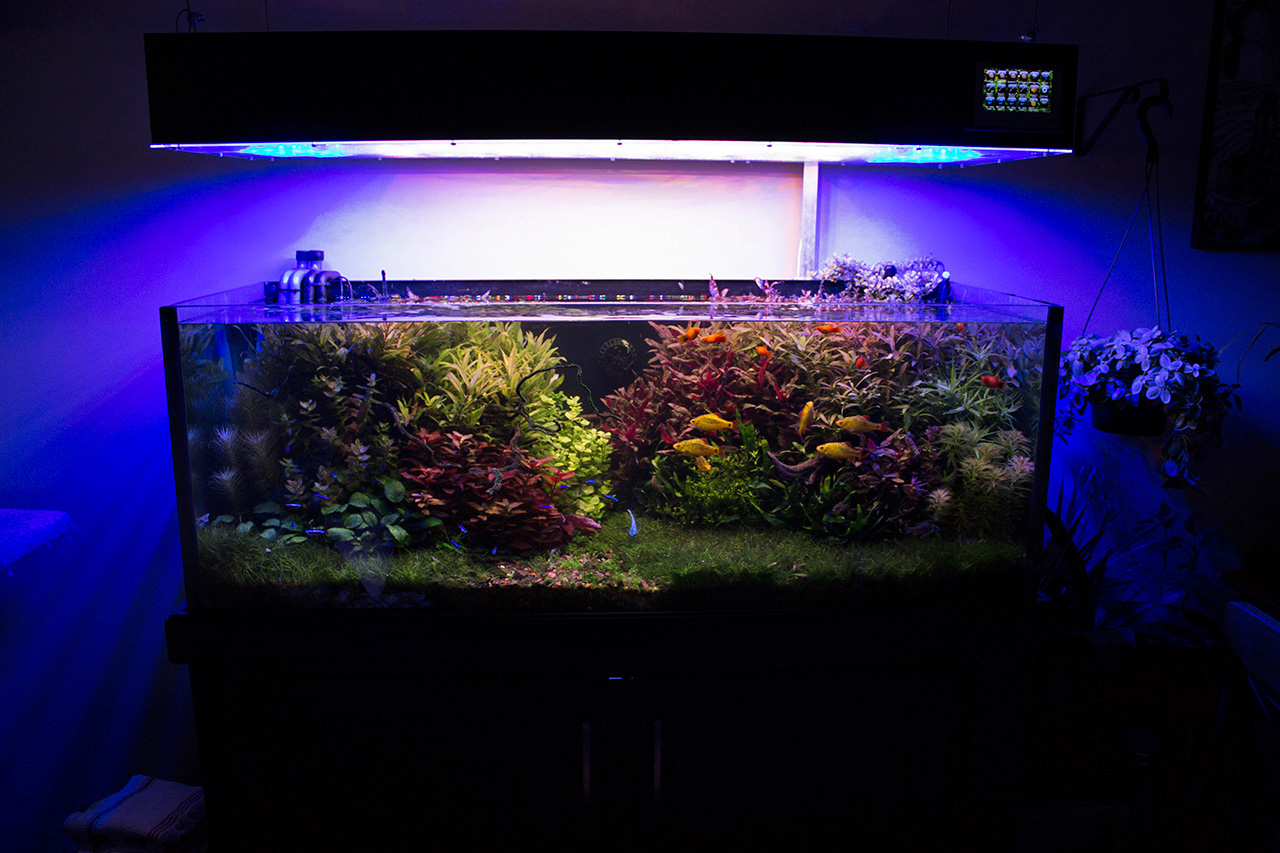 The money I was able to recoup from the sale of my unused equipment and aquarium almost completely funded the purchase of this tank and the various pieces of equipment I needed to make it a reality. The remainder of my unsold equipment was reused to help create some of the more technical aspects of this aquarium.

Having an entire stockpile of reef equipment and lighting at my disposal was a pretty exciting prospect. From the get go I had intended this tank to be as technically oriented as my former reef aquarium had been. This meant that my collection of Profilux equipment and DIY LED fixtures would be put to use almost immediately. 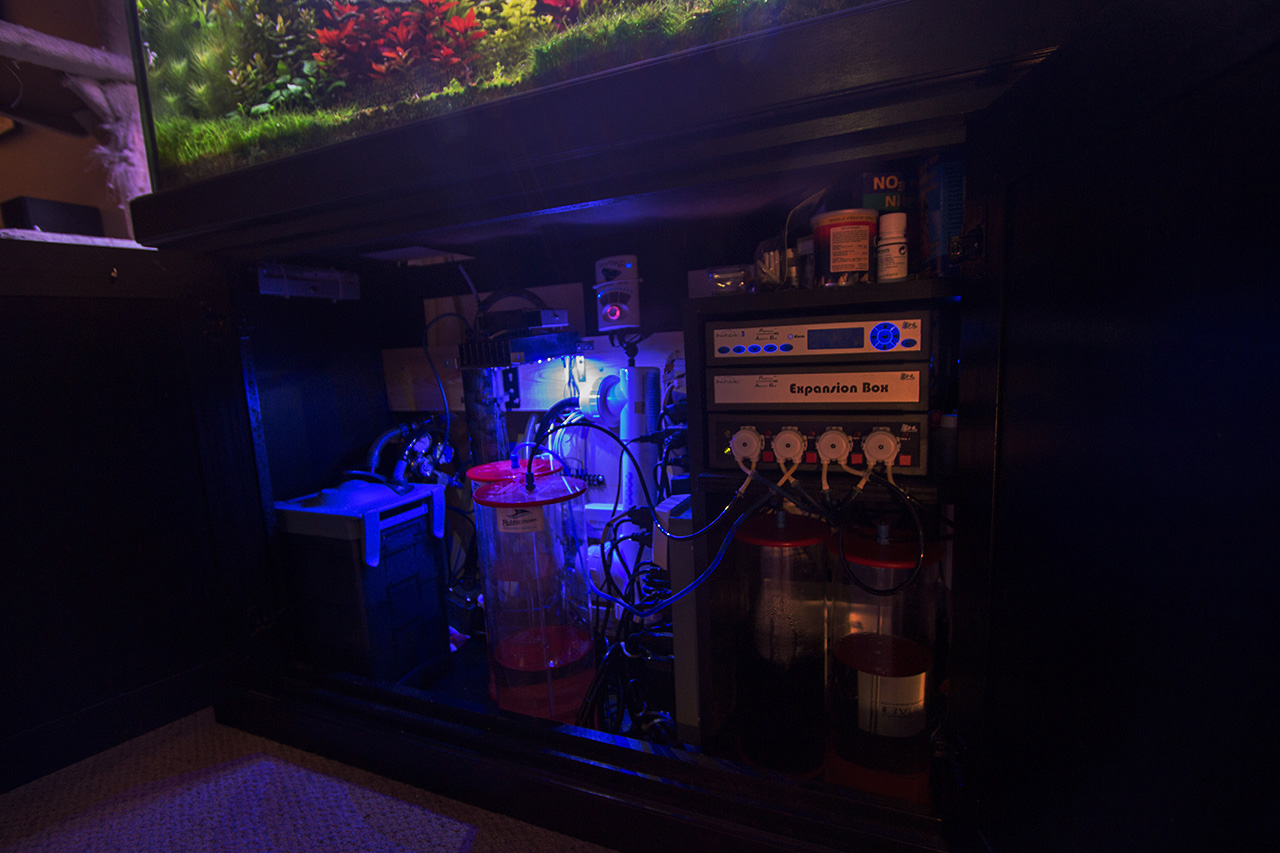 The aquarium stand open with all equipment visible

I had 4 LED pendants from previous tanks that had a 50/50 mix of Cool White and Royal Blue LED’s (I actually had 5 but I scrapped one later in favor of adding 2 T5s). While this had served me well for my SPS tank(s) it was far too blue for a shallow water planted aquarium. To combat this, I added several Red and Green LEDs to the mix. 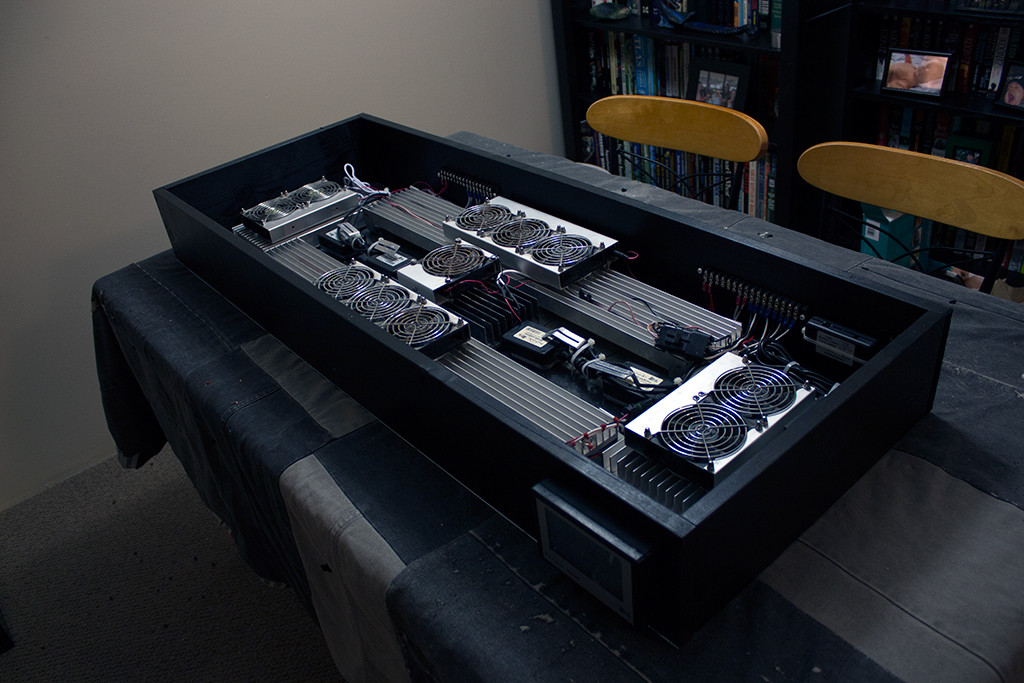 A topside view of the aquarium canopy during construction

The Profilux head unit itself did not have enough 0-10V ports to control all of my lighting channels, nor did it have enough expansion slots to add enough expansion cards. Thankfully I had an Expansion box kicking around and I was able to load it up with enough cards to provide all 10 ports I needed for the LED’s and cooling fans. The cooling fans actually speed up and slow down based on the intensity of the LEDs, this actually keeps the ambient volume down in the room not having 10 fans whirring away at full speed constantly.

I made use of 4 x GHL Simu Spots to have dimmable moonlights. These units can do a pretty decent cloud simulation, lunar cycle simulation, lightning simulation, and you can dim the Red and White/Blue channel separately (you can also preset to blue/white level from white, light blue or dark blue). 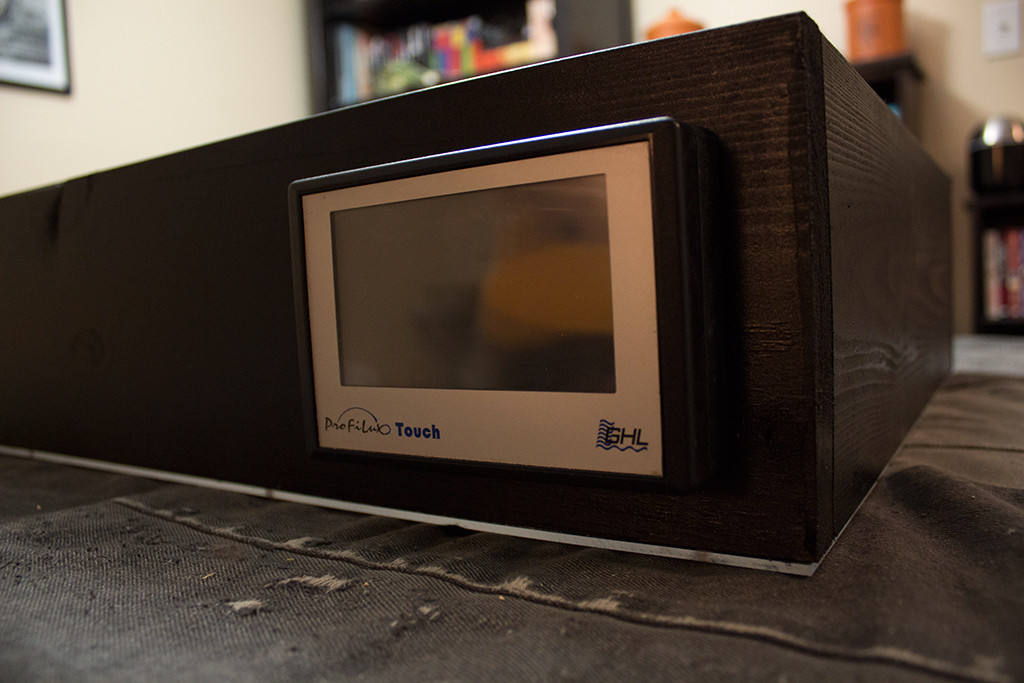 Photo of the Profilux Touch controller mounted to the canopy

In the end I came up with a light that has separately dimmable channels for every colour of LED, the left/right LED clusters are dimmable separately from the center clusters, T5’s on their own lighting schedule and fans that change speed to keep everything nice and cool. In the event of a tragic overheating event the lighting will dim down, and eventually turn off if the temperature isn’t corrected.

When you have this much light (which is honestly beyond ridiculous for most freshwater tanks) CO2 becomes an absolute necessity. If I go without CO2 for more than a week this tank suffers greatly. As such I usually have a supply of Gluteraldehyde kicking around as a liquid carbon source for emergencies (in the event of no-CO2 I have to dose 45ml per day to keep up with the plant demand). 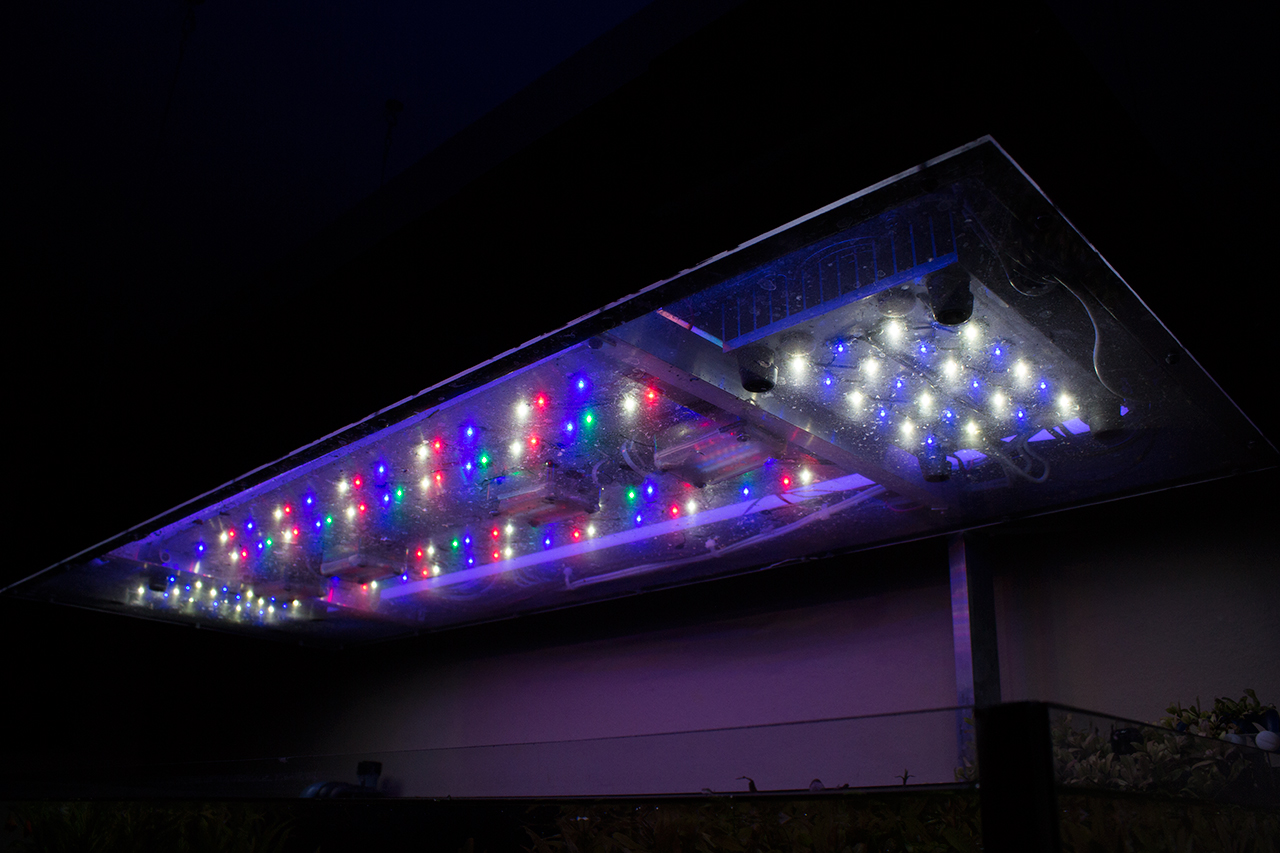 Underside of the aquarium canopy with the new LED’s installed

The Profilux controls the CO2 injection for this aquarium. I manually adjust my kH to 6 dkH so that I can tell the Profilux to inject CO2 until I have a pH of 6.8 (this puts me at roughly about 30ppm of CO2). At night the CO2 control turns off and the pH is allowed to creep back up.

With lots of light and CO2 my fertilizer demands are pretty high. The growth rate in this tank is somewhat extreme and as such I need to dose a lot. I made use of my Dosing pump and balling chambers to automate the EI dosing method. I created stock solutions of KNo3, K2SO4, KH2PO4, and CSM+B (for micro nutrients) and have the Profilux dose them separately on alternate days during the week.

On the weekends I have to do a little bit more chemistry. Our tap water is extremely soft in my area with a kh of 2 dkH and requires some work to keep the pHstable. I usually just add baking soda to bring the kH up to 6 degrees during the water change.

The day following a water change (once the kH has stabilized) I add a mixture of CaCl2, MgSO4·7H2O and chelated iron. 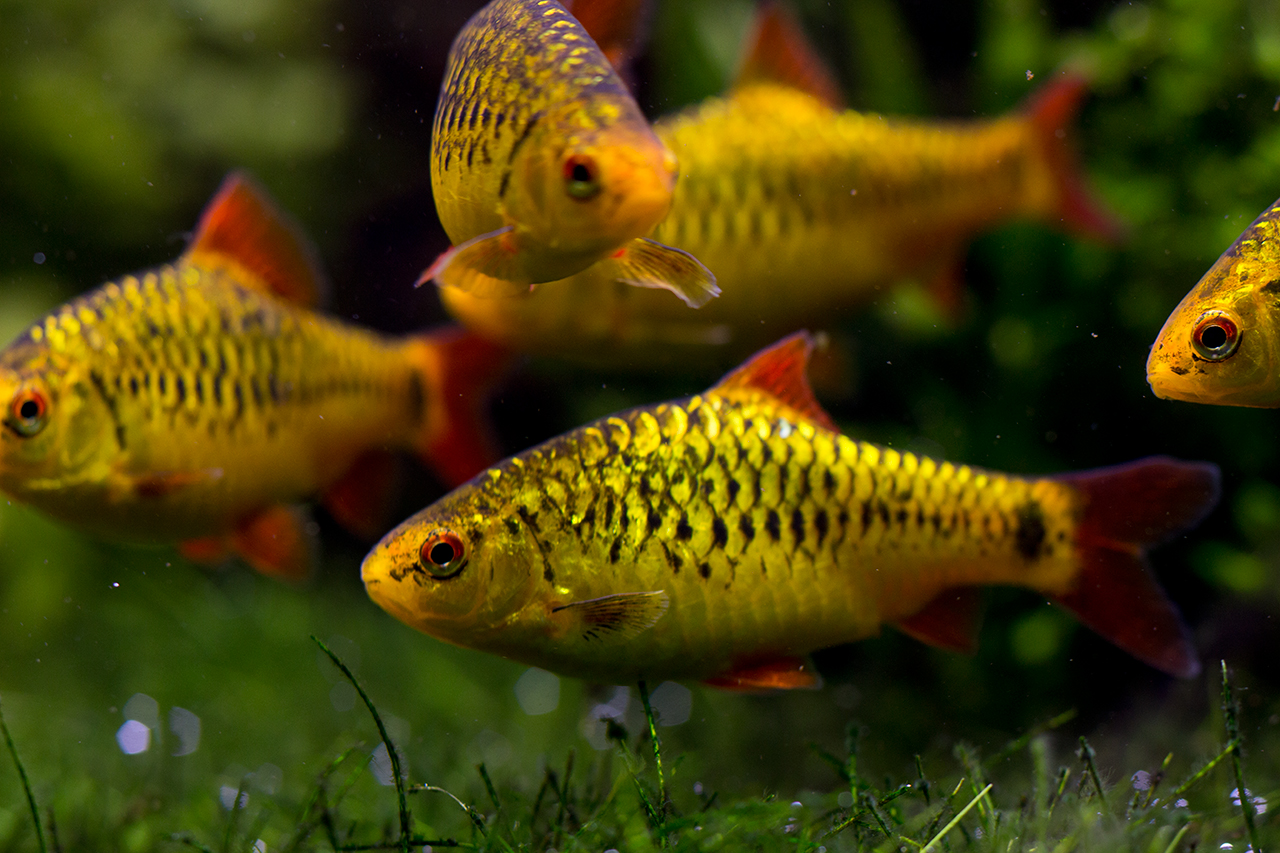 While I would love to have a minimal fish selection and stick to a simple giant school, I am a sucker for brightly coloured fish. I selected fish that contrast against the greens and deep reds of the plants.

Like many, I suffer from a serious case of collectoritis. My selection of plants is always changing slightly as I experiment with different species. In my part of Canada selection is VERY limited, so it is a real challenge to find rare plants. Hopefully once the weather improves I will be able to bring in some more interesting species.

This tank was first filled March 8, 2013. It took one solid month to repair the old LED fixtures, build the canopy, wire everything, etc. 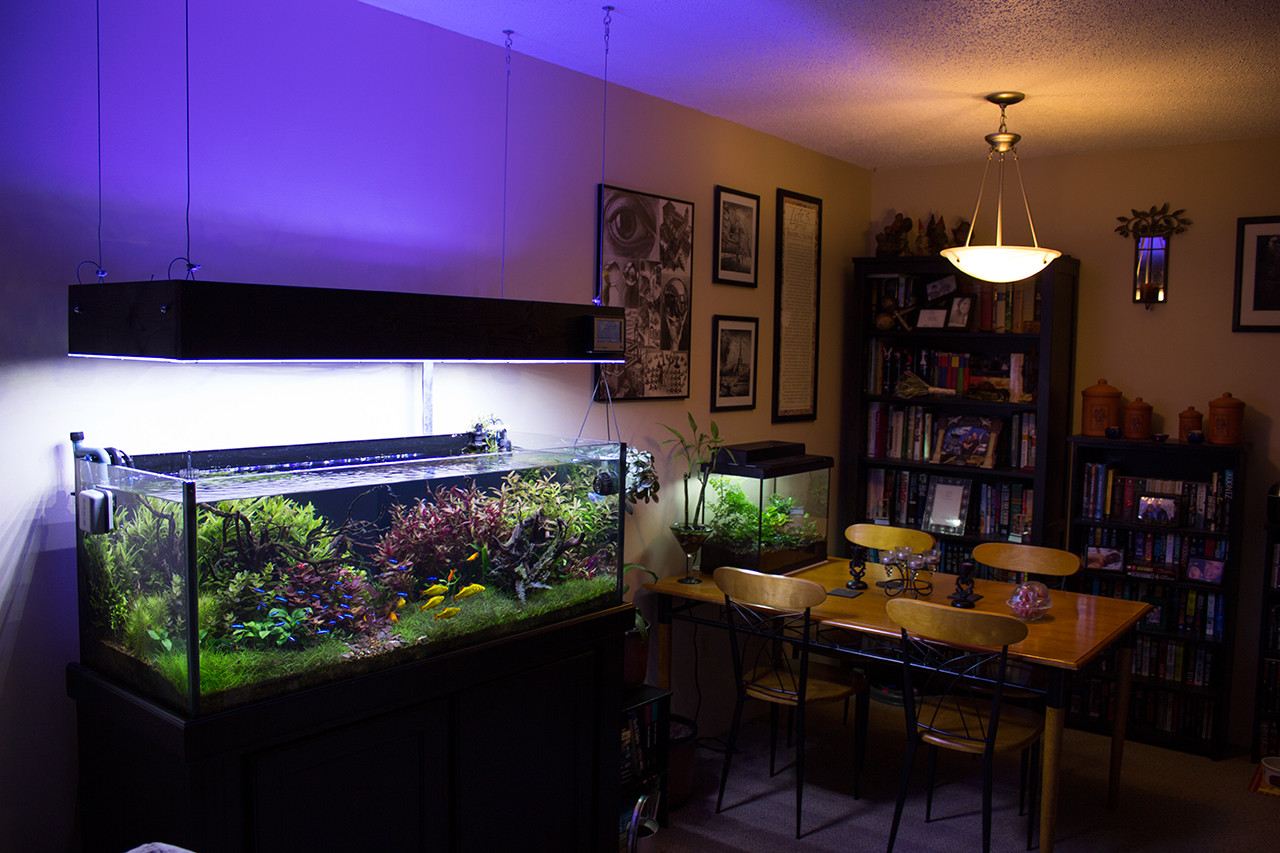 Picture of the aquarium and room (November, 2013)

Unfortunately, the tank suffered from a rather significant disaster around May when the CO2 tank leaked (while I was out of town working). Lack of CO2 led to a nutrient excess, and when combined with high light it caused a massive algae bloom that annihilated most of the plants and some of the fish. It took several months to recover and regrow.

After the tank recovered I realized that my lights, while bright, were not putting out enough red for some of the plants. I supplemented with 2 T5s initially (2 x KZ Fiji Pink bulbs), but eventually added Red and Green LED’s to help fill in some of the missing spectrum.

Future upgrades to the lighting are planned. Deep Red (660nm Red), more Green, and Blue LED’s will be added. Filtration upgrades are on the horizon as well; I have my eye on an Eheim Pro 3e filter as I can use the Profilux to control it. 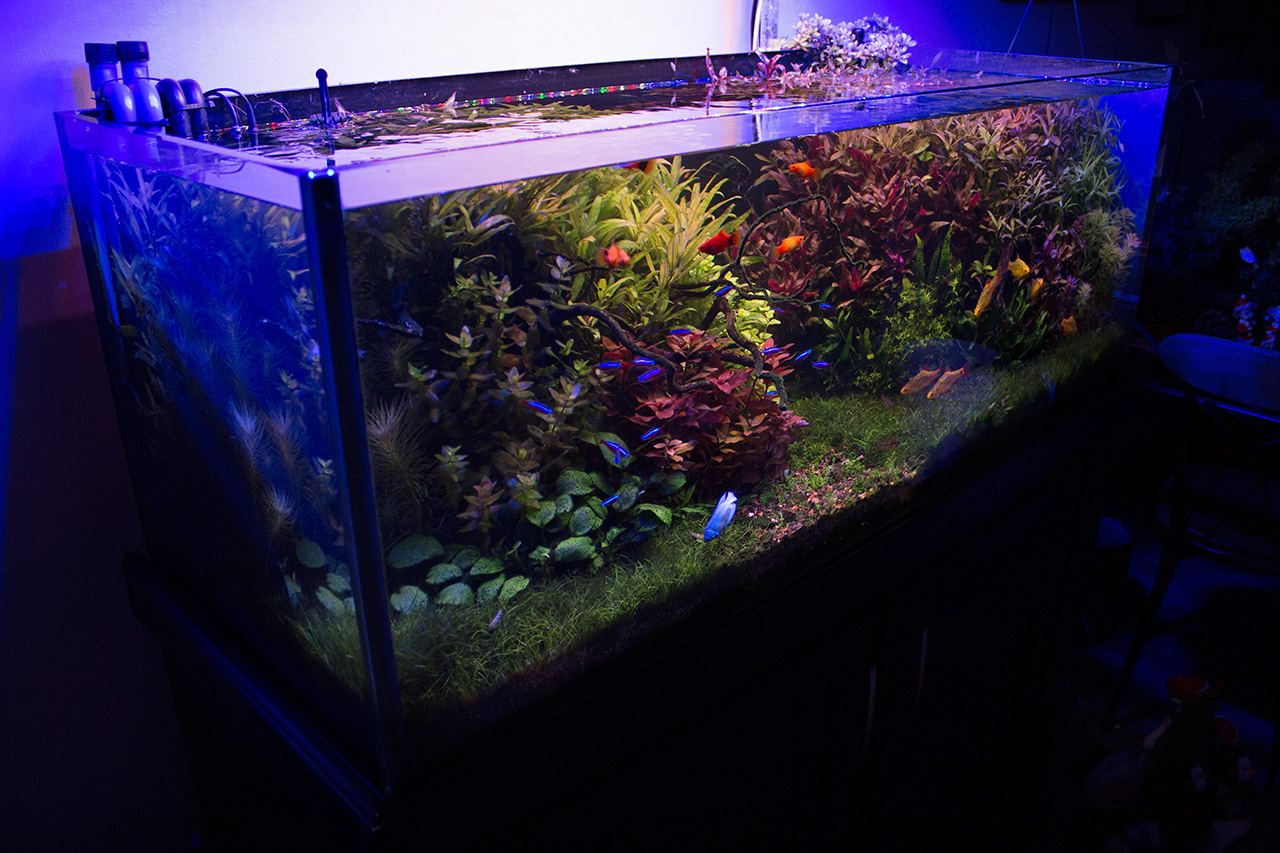 This aquarium does not adhere to any of the traditional styles of aquascaping. I am not patient enough to craft a “nature aquarium” nor am I a fan of the typical “dutch” style so I kind of do my own thing. I focus heavily on rapid growth so I can constantly tinker with different shapes and looks.

This aquarium requires constant pruning. Certain species of plants grow exponentially faster than others so I am often clipping off stems every few days. In a given week I remove about a cubic foot of plant material.

One of the things that frustrated me the most about reefing was simply how “long” positive change took to occur. The long term results were amazing, but I really like to get my hands in there and muck around (something that seldom does corals any good). This tank is completely different, and I have a blast knowing I can hack the plants down and in a few days they will be back up at the surface. 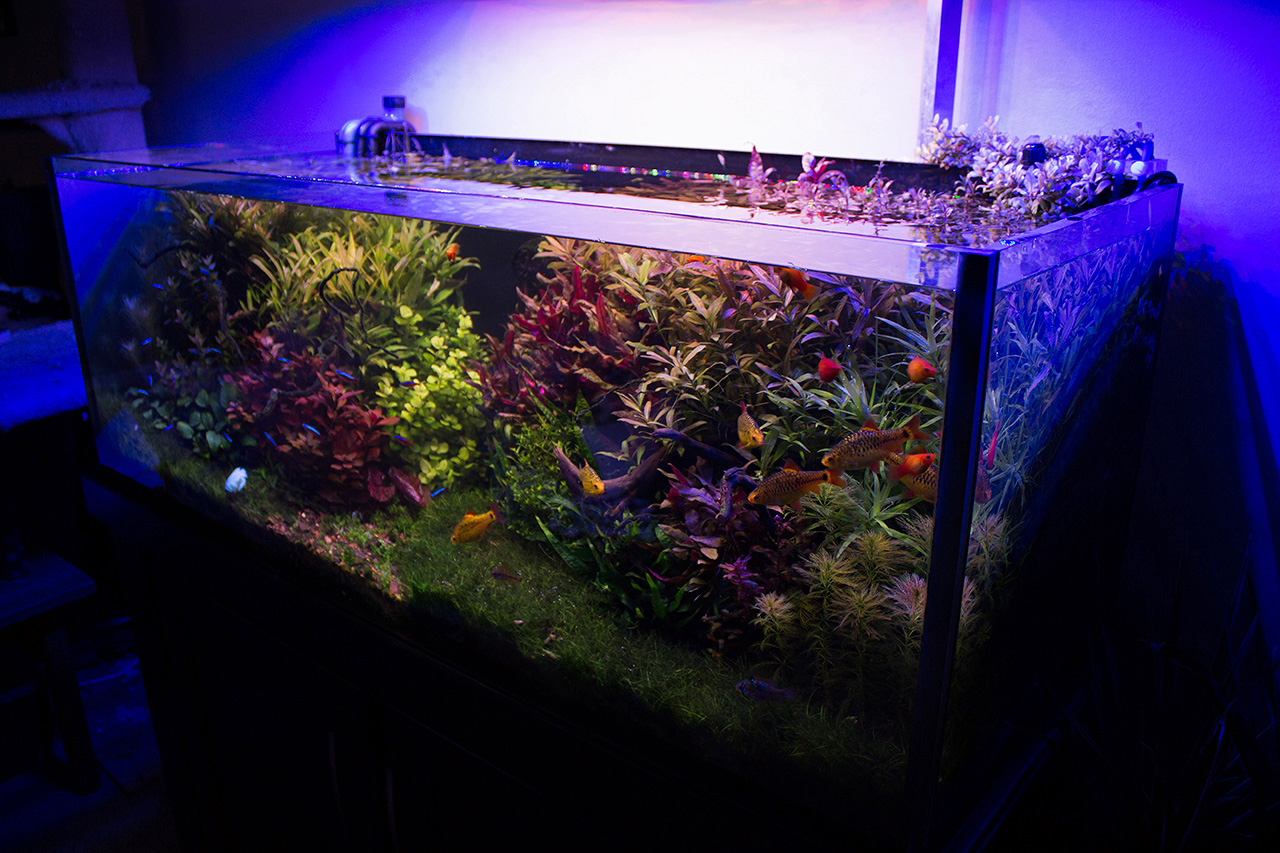 The net effect of this rapid growth and overall plant health is that maintenance is actually really easy (pruning aside). Every weekend I change about 30-35 gallons of water, and perform filter maintenance about every 6 weeks. I have to calibrate my pH probe periodically, and blow dust out of my chiller and fans but that’s about it.

I’ve built this aquarium to automate a lot of the more tedious tasks (fertilizing, lighting, top offs (not implemented yet, but soon) to free up time that I can spend on the plants. The result has been a tank of endless fun that I hope will run for many more years, or at least until I upgrade. 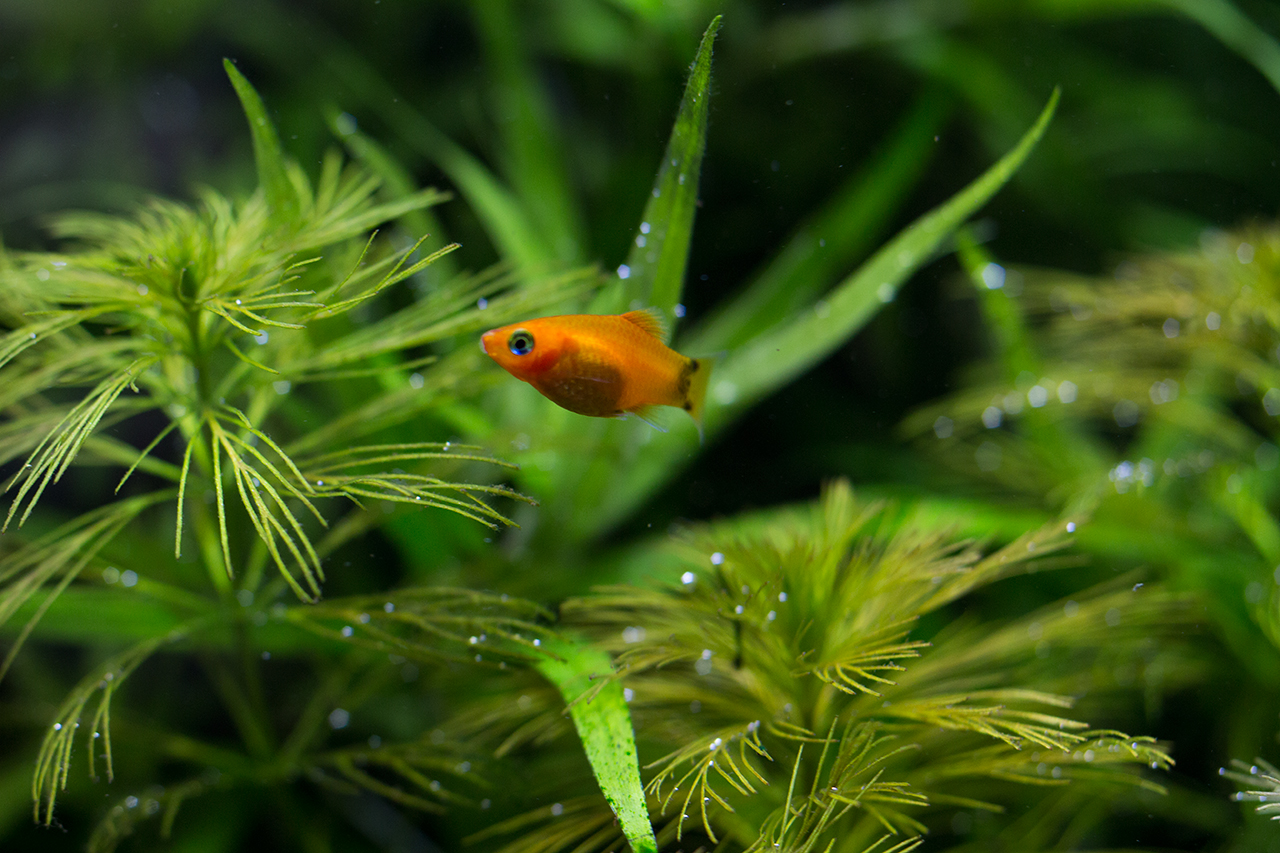 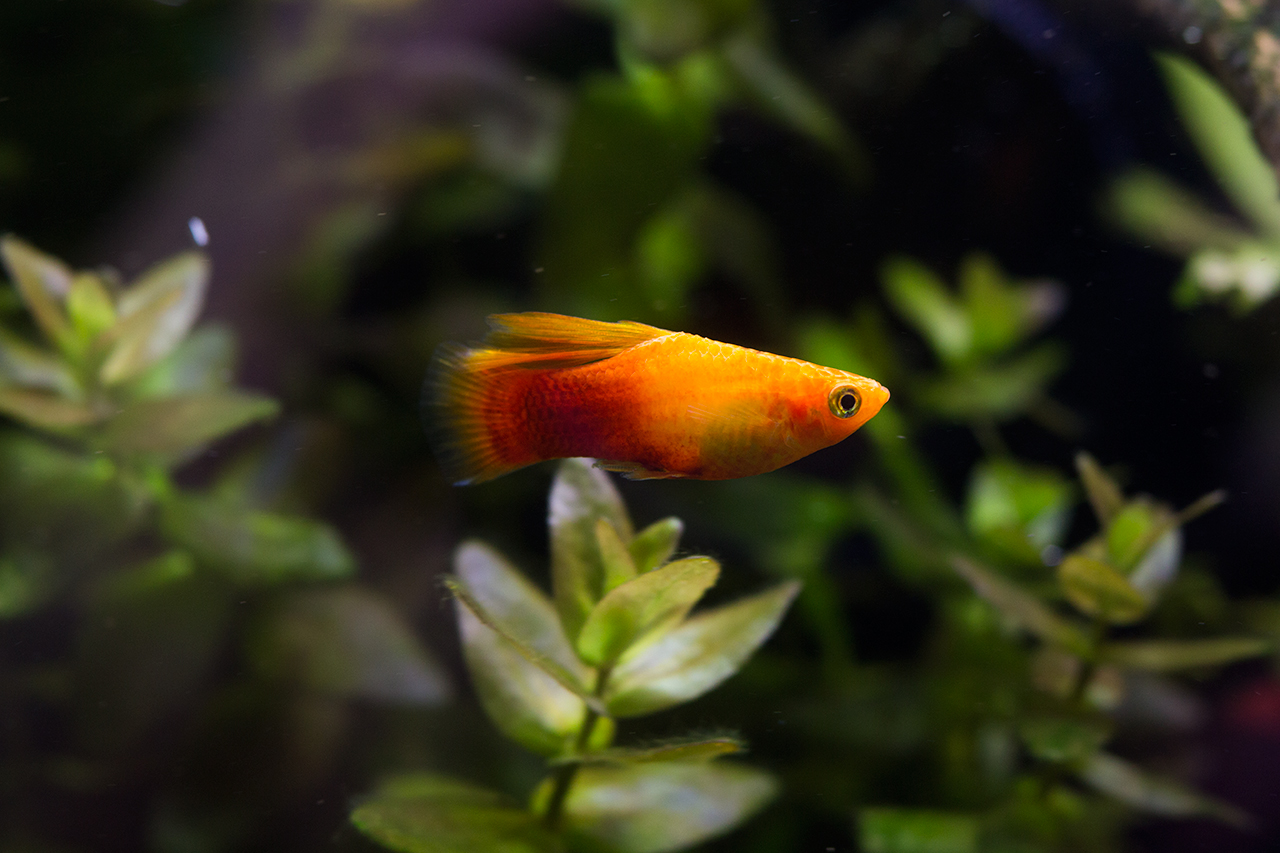 And a mature Longfin Platty 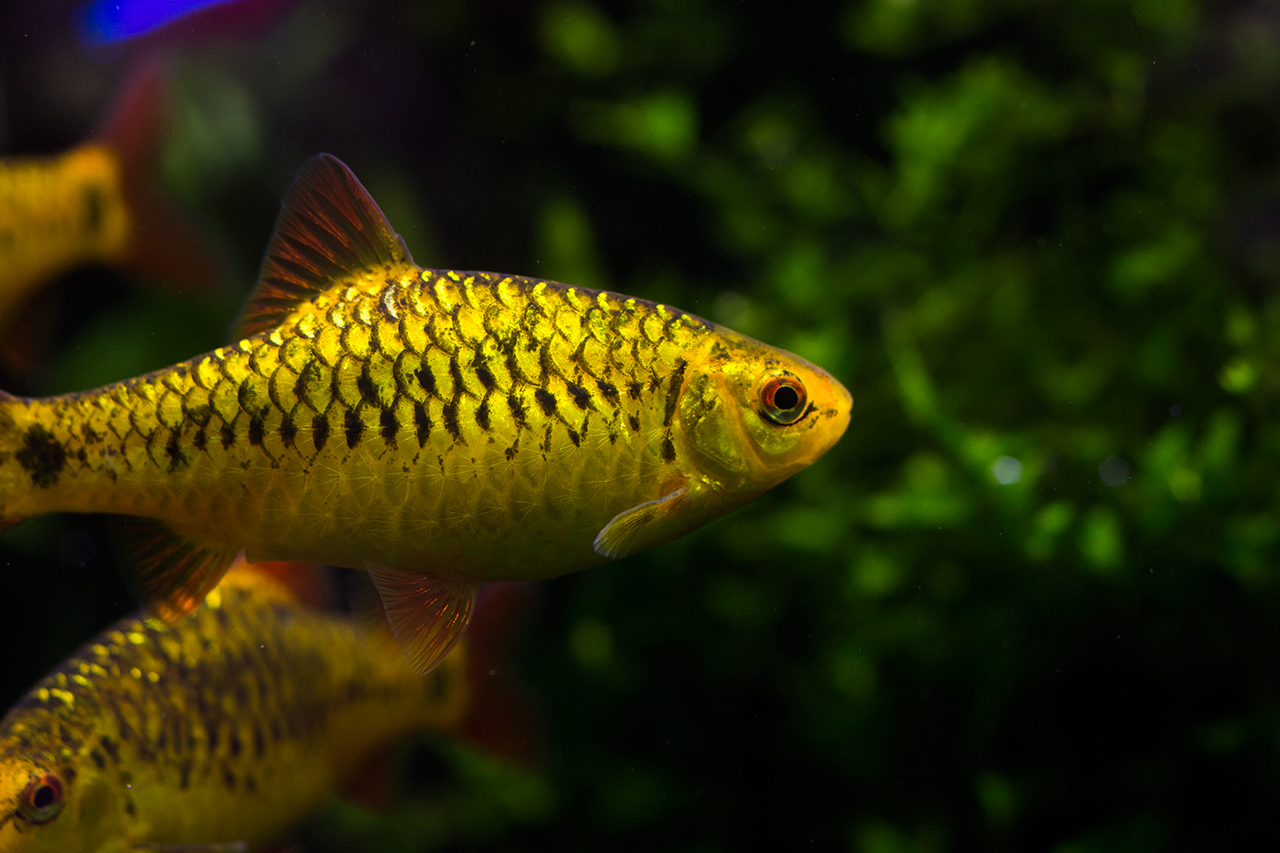 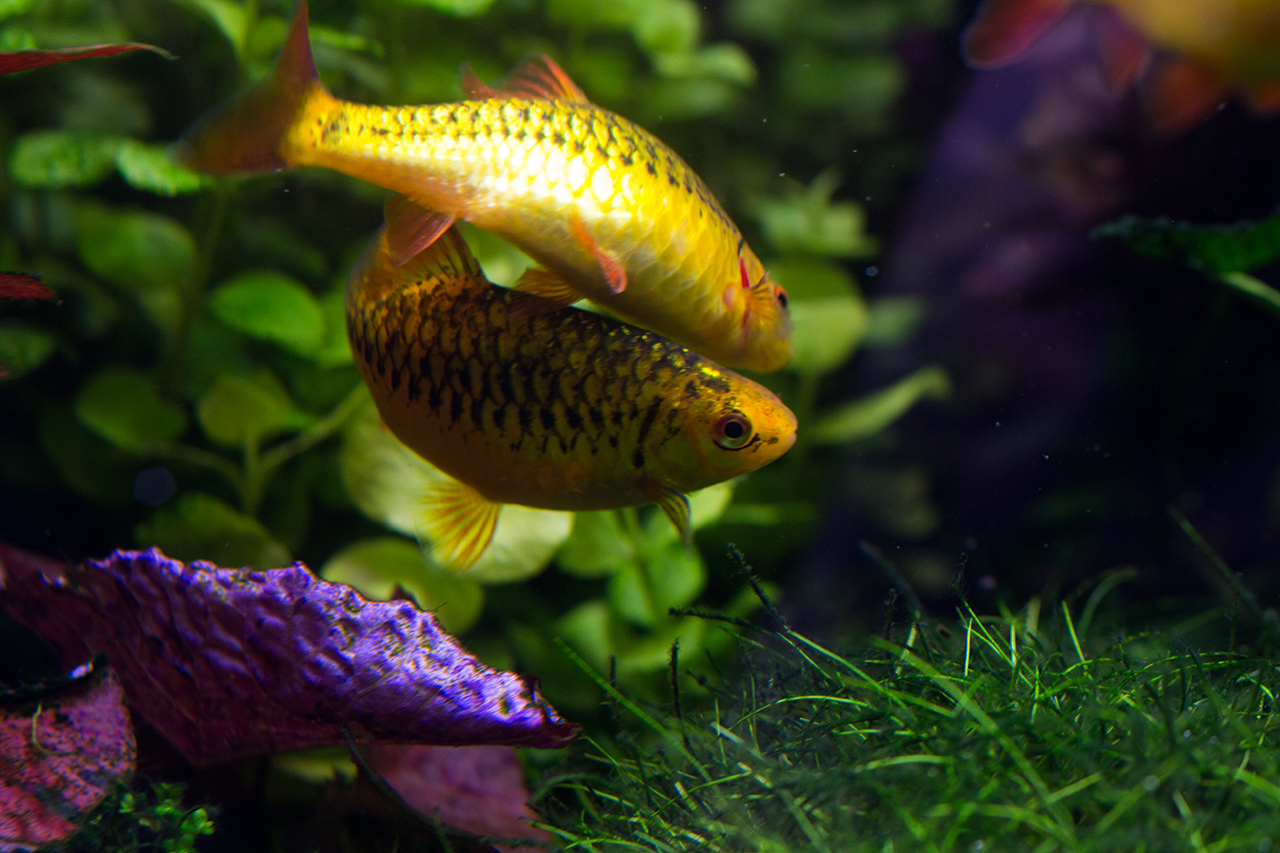