I live in Upstate NY and became interested in reefkeeping 9 years ago. After purchasing and borrowing as much reading material as possible, I set up my first aquarium ever: a 75 gallon reef in August of ’93. After great success with this initial reef aquarium, I set up phytoplankton and rotifer cultures in my basement to raise my larval Amphiprion anemonefish. At this point in time I also started up two 10 gallon coldwater reef systems, and another 75 gallon reef for my hundreds of baby clownfish. 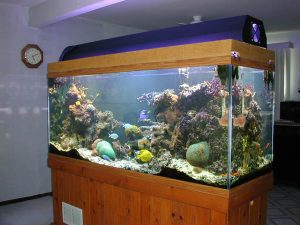 In April of ’97 we moved to our present home. A wall was torn down, header installed, and my 220 gallon main viewing tank was placed as a room divider. It is an “island tank”- viewable on all four sides. All the contents of my two 75 gallon reefs were combined into this system: Approximately 300 lbs.of live rock and associated reef life into a total system volume of 235 US gallons. Live rock was added from many different sources to maximize the biodiversity introduced into the system. Some of this was bonded to a cinderblock framework employing “Thorite” marine cement.

I have run all my reef systems on a “Natural Method”. I employ a “Modified Berlin” style approach. I balance the system with the addition of appropriate organisms. It is very satisfying to let “somebody else” handle a chore inside the tank for me!

I vary from the original “Berlin Method” by using no carbon or liquid supplementation of trace elements.

I also have added a lit refugium into my sump. This area has become crucial for maintaining certain organisms in the main viewing tank.

The systems’ main pump is a “Little Giant 4MDQ-SC”.It operates with 9′ of head, as it is located in my basement. The majority of circulation in the tank is provided by 12 “MaxiJet1200” powerheads on a “Tsunami” wavemaker.

I have obtained varying degrees of success with many different types of lighting over the years. I’m currently burning one 400w Radium 20k flanked by two 250w AquaLine Buschke 10k MH lamps in conjunction with four 6′ VHO actinics. All ballasts are electronic. Refugium is lit with a 75w incandescent. 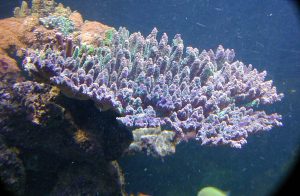 Both main viewing tank and refugium receive direct and indirect sunlight at certain times of each day.

Rock and sandbed in the main tank provide the bulk of filtration. I use a 24″ venturi skimmer which collects skimmate rarely. The slow water movement through the lit sump/refugium acts as a type of mechanical filter. Sediments collect and form a mud sandbed. Macroalgae is grown and harvested here. Aiptasia is maintained in this area to provide a “particulate matter removal service”. They also provide an ongoing food supply for my copperband butterflyfish in the main display upstairs. This sump/refugium area is roughly 10 gallons- small for a tank this large. The key to it’s success is productivity. Baby Bangaii cardinalfish can be grown out here with no supplemental feedings- the refugium is teeming with microfauna.

Makeup freshwater is kalkwasser. I use no liquid or other additives to replace trace elements on a regular basis, although I will experiment once in a great while. The feeding regimen and water exchange becomes critical for supplying needed trace elements in my system.

Anthias in my system need feeding at least twice daily, although the refugium can sustain them for several days without supplemental feedings. Mated pairs require proper feedings to induce spawning. Big surgeonfish have big appetites! It is obvious what I feed my fish also “feeds the tank”- and supplies trace elements to the system as well. I like all my fish “fat”. Unless there is an outbreak of Derbesia or Bryopsis “hair” algae, my surgeonfish get large daily rations of nori and frozen broccoli. Frozen mysid and HUFA-enriched brine shrimp are provided mainly for the anthias, cardinalfish, and butterflyfish. 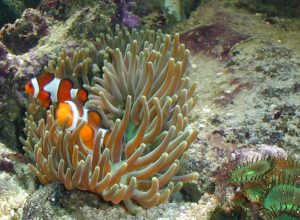 All varieties of “Ocean Nutrition” flakes are provided daily, as well as VibraGro pellets- crushed and whole.

Occasionally I’ll toss in a small chunk of “ProGreen” or frozen bloodworms. And around the holidays- a shrimp or two. The fish also enjoy a rare treat of frozen orange sections. I’ve also obtained excellent results with ReeferMac’s “fishloaf”. He is a member of our local club- the “Upstate Reef Society”. It is great when a local club member offers a homemade food for a reasonable price, not to mention it will spare your wife’s food processor!

Approximately 30 fish {when no baby Bangaii’s are present} and a 50/50 mix of soft and stony corals.

Other invertebrates worthy of mention:

Keeping all the glass clean is a challenge! Water is exchanged when corals appear “dull”. Kalkwasser is dosed daily as makeup freshwater.

The only water “tests” I have ever performed on my 220 reef have been visual. {ie: excess hair algae= high phosphates}. I keep the salinity “in the green zone” of the bobbing hydrometer. Water temperatures are maintained within 75 to 83 degrees F.

When setting up this tank to be viewable on all four sides, I wanted to avoid the typical reef “wall” appearance. I also wanted a large swimming area for fish. I also believe my sump overflow drain to be a novel way to dispose of old saltwater.

Reaching the bottom inside the tank was a problem I solved by purchasing “Aqua-tongs”. This system has survived 4 RTN events over the past 9 years. I’ve learned to avoid rapid fluctuations that can cause stress to corals. Leave the sandbed in the sump and viewing tank alone! And never place a chiller in a tank stand! Taking quality pictures of this aquarium is a major challenge.

I still see something new every day in the 200 gallons of water sitting in my living room – imagine what secrets are yet kept in the ocean!