My tank is a 120-gallon, Reefready. LR in the system is about 3.5 years old. I move once a year (unfortunately) and when I do I always use new sand. I nuked my tank once moving the sand bed, and it took a solid year to recover from the nutrient bomb released by moving the old sand bed.

No “formal” filtration. I took the cup off the skimmer and use it solely for aeration. The tank had a little hair algae for a while, but a balance was reached and the algae never came back. 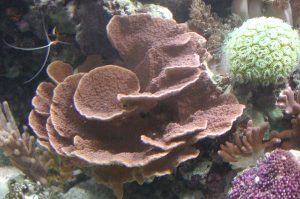 A foliose Montipora sp. This coral was obtained as a 1″ fragment from James Wiseman. James obtained the coral from Sanjay Joshi.

I got the majority of my corals from making the local fish stores (LFS) rounds here in Houston. If you are persistent you come across some nice stuff. I also traded a lot of frags with the local “Marshians.” James Wiseman contributed a lot of my plating corals. My fish were also found cruising the reef stores or by having Aquatic Designs special order me fish. Keith the owner scored me a perfect tusk that was only about 1.5-inches long. Perfect reef fish, but you may lose your shrimp. 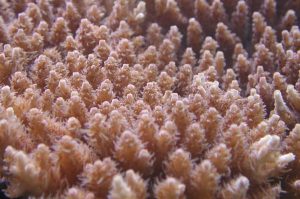 A tabulate Acropora sp. in the authors aquarium. This coral has grown and thrived in the system, despite its large size.

My oldest fish (3.5-yrs) would be “Sam” the yellow tang. He was my first fish. My oldest coral is a yellow leather that is also 3.5-years old. When I got the leather it was the size of a baseball; now the beast is the size of a soccer ball.

I feed flake (OSI spirulina flakes), alternating with frozen (Formula 1, Formula 2, prime reef, angel formula and mysis shrimp). The only maintenance that I do is to scrape the glass and replace evaporated water with make-up water, which comes straight from the tap!!! No RO 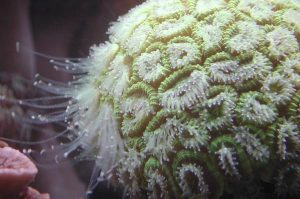 A beautiful photo of the Favia’s sweeper tentacles.

(reverse osmosis) for this tough tank! No skimmer, water from the tap, and no water changes. I DO NOT recommend doing this. I think I was very lucky for a long time.

I kept fish that were not supposed to be reef safe in my tank. I think that my reef was kind of special in that aspect. Full-blown adult angels, harlequin tusks, grouper, butterflies etc. I think I was very fortunate to not have all my stony corals munched on, but every time I tried a suspect fish, it always worked out. Well, except for the grouper. I also think that my tank’s coral focus (Montipora plating species) is really cool. I have red, green, purple, and brown Montipora morphs. Big colored Montipora plates growing from the rock look really nice.