I stopped keeping freshwater tanks and started keeping saltwater aquariums back in the mid-’80s and set up my first reef tank in 1996. As much as I loved the reef hobby, by the summer of 2007 I decided my conscience simply wouldn’t allow me to continue with it. It left me with a dilemma, though, as I loved keeping aquariums and had been doing so for nearly my entire life. In the end I decided to return to the freshwater tanks I’d left behind long ago, and to explore a segment of that hobby that was only in it’s infancy way back then, the freshwater planted aquarium.

After a few months of research and gathering parts and supplies, on 10/4/2007 I started up a 15 gallon freshwater planted aquarium. In the months since then I’ve been amazed at how much I’m enjoying this tank. There’s hardly any maintenance involved, and I’m continually surprised by just how easy it is to be successful with it. More than that, I’m genuinely excited by the possibilities of what you can do with this sort of tank, and that’s an excitement I haven’t felt about reef aquariums for a long time now. These tanks are about as far from the fruitstand style of most reef aquascapes as you can get.

Best of all, I get to enjoy my hobby without needing to justify it to anyone, least of all myself.

I chose a 15 gallon tank for this set up because I felt it offered me a large enough volume to create an attractive aquascape, while at the same time being small enough still that maintenance would be very quick and simple to perform. 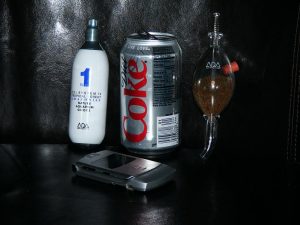 The ADA System 72 pressurized CO2 is designed for use on small tanks. Rather than use a large, refillable CO2 canister, it instead employs small, disposable 72 ounce cans of CO2. While not as economical in the long run as a traditional 5 lb canister, these disposable cans are tiny, easy to hide from view and very convenient. I maintain around 30 ppm of CO2 in my tank, and at that rate one of the disposable cans lasts me just a little bit longer than two months. CO2 is dispersed via a pollen-glass diffuser, and the concentration of CO2 in the water is monitored visually with a aid of a drop checker (a nifty little device which displays at a glance if you’ve got too little, too much, or just enough).

Very little equipment intrudes into the tank itself. The intake and return from the canister filter are positioned in the back left corner, effectively hidden by the plants. The diffuser is partially obscured by the hairgrass at the rear of the tank, and only the drop checker sits out in plain view. 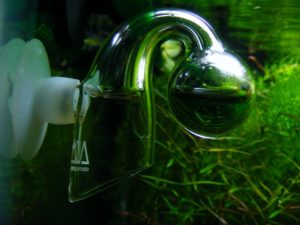 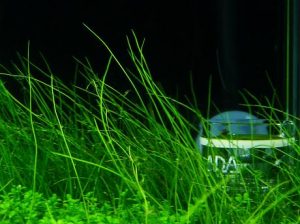 After seeing photos of tanks that featured a “lawn” of hemianthus callichtroides, I knew that was what I wanted to do. Although I was intrigued by the Iwagumi (“stone garden”) approach currently popular in aquascaping circles, I opted instead to try to recreate the feel of a small meadow at the edge of a forest. As the tank I’m using is only a 15 gallon, one of the biggest challenges was giving it the illusion of being much larger than it actually is. The open, negative space in the layout helps with that goal, as does the fact that all of the plant species used have tiny, delicate, fine foliage. 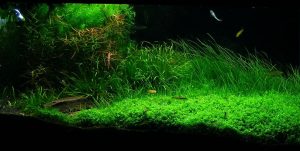 I began with 10 pots of hemianthus callichtroides “cuba” (more commonly known as HC), 8 pots of hairgrass (eleocharis acicularis), 12 blyxa japonica and several bunches of ludwigia repens. On day one, things looked rather sparse. I had expected the 10 pots of HC to cover more volume than they actually did, and was a bit worried at first because the plant has a reputation for taking some time to get going when introduced to a new tank. The hairgrass looked pretty bad initially as well. Fortunately, just three weeks later both had shown significant growth and had spread a great deal. By the six week mark, the HC lawn had completely filled in. 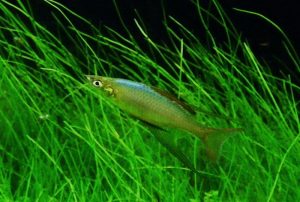 Also at the six week mark I made my first changes to the aquascape, removing the ludwigia repens and replacing it with some java fern and anubias nana var. “petite”, both tied down to a stump of driftwood placed where the ludwigia had been. I found I wasn’t happy with the finished result, however, and a few weeks later I removed those new additions and replaced them with several bunches of myriophyllum pinnata and a dozen or so stems of needleleaf ludwigia (ludwigia arcuata).

Surprisingly little is required. My daily routine is just feeding the fish and adding fertilizers. Once a week or so I trim the plants. That mostly consists of topping the stem plants and, every now and then, mowing the HC “lawn”. Every few weeks I perform a 5 gallon water change, and once every few months I give the canister filter a cleaning. 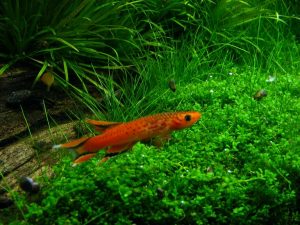 This tank has been a learning experience, and as such it’s taught me a few things the hard way. Chief amongst them is that mixing HC and hairgrass, while very attractive and effective, is a royal pain. The hairgrass spreads by runners that are often as much as an inch below the substrate, which means hairgrass runners are continuously spreading below the HC lawn. Stems of the hairgrass poke through the HC and require regular removal. If I were to try to use both species in the same tank in the future, I’d use thin sheets of acrylic as dividers in the soil. That way I could keep the hairgrass “caged” and keep it’s runners out of everything else. 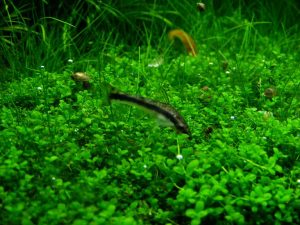 I’d like to thank Robert Hudson of AquaBotanic, the source of nearly all the plants I’ve used, as well as Jeff Senske of Aquarium Design Group from whom most of the hardware and supplies were purchased. Both these gentlemen and their companies were very helpful as I got this project started.

I also owe a large “thank you” to Roy Deki of the Arizona Aquatic Plant Enthusiasts. Photos of his planted tanks provided me with the inspiration to begin my own, and the ludwigia arcuata stems currently in my tank were sent to me as cuttings from his.

I’d like to encourage the reefing community to give these tanks a try. If you’re beginning to feel burnt out on reef keeping, planted tanks offer a beautiful alternative that doesn’t involve nearly the amount of work and expense of a reef. If you’re having qualms about the morality of the marine ornamentals industry and the health of the world’s reefs, the planted tank hobby is the perfect substitute. They also don’t require reef-tank levels of patience; even the slowest growing of aquatic plants grows more quickly than the fastest growing of corals. They’re appealing; I’ll tell you honestly that non-aquarists seem to enjoy a planted aquarium more than they ever enjoyed my reef. They’re warm and inviting; a planted tank looks much more natural in any décor than a reef tank does. Where reef tanks can appear alien and eerily blue, the planted tank radiates warmth in shades of green and red and yellow.

Besides, even in this day and age of exorbitantly colored, ridiculously expensive, inordinately rare corals with over-the-top names like Reverse Radioactive Green Monkey Nipple zooanthids, there’s still not much that compares to a school of neons swimming amongst a lush aquatic meadow.