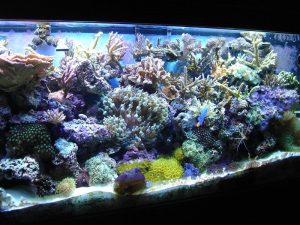 First off it’s a great honor to be chosen for the Featured Aquarium. Who would have ever known that this hobby would have taken me to the levels that I have attained within saltwater aquariums. I’ve been involved with the aquarium keeping scene since I was just a kid of 14 yrs old. My mother brought my first tank home on day – a 20 gallon high. I was hooked from that point on. As for saltwater, it’s been a short 3 years that I have been knee deep in reef keeping! What can I say? It’s an addiction to which I have not yet seen a cure.

It all started, January 2003, when I received a call from a friend who said he was moving to New York and who asked if I would like to take over his saltwater aquarium? Free of charge. How could I say no? Two and a half years later, I have two tanks going, a 15 g and a 55 g. This article details my well populated 55g reef display. 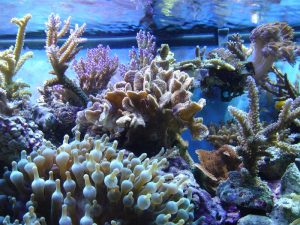 Initially, the tank was setup in August 2003 to accommodate about 80 pounds of live rock a friend had that needed a place to be housed as he repaired his leaky tank. The tank was set up with a 4-5 inch DSB and live rock. It sat empty until January 2004 when my friend decided it was time to return his live rock. In the end, I was able to keep one rock from his collection. Since I had my first SPS given to me, a chip-sized piece of Pavona, which I had glued to the center piece, I was able to keep that one rock. Granted it was his largest piece of around 18 pounds… such a great friend. That center rock still sits in its original position with a softball sized colony of the same Pavona growing on it. After that I needed to fill the tank with live rock once again. I was very fond of the Fiji rock and the Tonga branch rock so I have the complete right side of the tank filled with about 40 pounds of Tonga and the left side with approximately 30 pounds of Fiji. As the picture indicates now, the rock work has stayed in place for 2 years now – if it works, leave it alone. 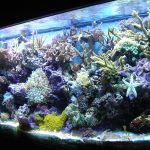 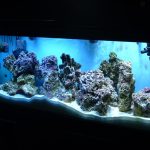 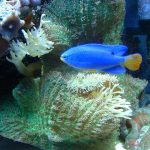 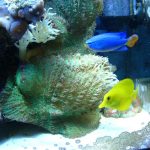 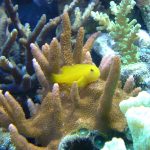 I feed the tank with a mixture that was made with about 6 frozen and 3 flakes varieties combined. I also use Vita-Chem and Phytoplankton for the corals. Tank is fed once every three days. I found with less feeding I don’t get ANY undesirable algae outbreaks and the tank stays a lot healthier.

Take your time, read books, visit the web and absorb as much as you can. Don’t be afraid to try something new and keep up on your husbandry. (Yes, that means water changes for those that don’t do them!) I feel with this regiment you will have a successful tank for many years to come. Furthermore, this hobby requires patience and money. Visiting places like Reefs.Org, I have been able to learn and obtain great knowledge from fellow aquarists that have been helpful in responding to questions, gripes, and assisted with the background know-how of our awesome hobby.

I appreciate everyone taking the time to read about my tank setup and its inhabitants. If you have any questions or comments, positive or negative, I’d love to hear from you. Racenrich@wideopenwest.com