Seashells are certainly diverse and widespread. They are loved and enjoyed by many, and have been for thousands of years. People around the world love collecting, cleaning, and displaying these ocean treasures. 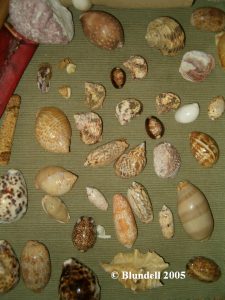 Pictured here are some of the author’s Indo-Pacific seashells cleaned and ready for display.

This article is intended to bring attention to something treasured by many; seashells. 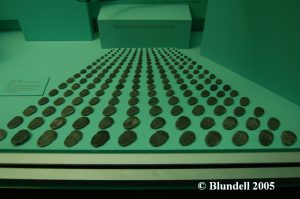 Although classified in the Arthropoda phylum, Trilobites (extinct) like those shown here are frequently collected. Trilobites fossils are abundant and have been of great use in helping scientists to understand evolutionary events.

Seashells liter the shores of beaches around the world. They serve as jewelry, currency, mementos, toys, decorations, cook ware, and an abundance of other ways. In fact shells “have stimulated the artistic, promoted ideas in design and architecture, inspired musicians and poets, and have led to the publication of some of the most beautiful books ever produced for natural historians” (Oceana 2004). Seashells are made by marine invertebrates. These invertebrates are typically in the phylum Mollusca. There are seven extant (living) and in regards to the molluscs about 3/4 of the species are contained in the class Gastropoda (gastropods). With over 25,000 species of snails (gastropods) and 10,000 species of bivalves (bivalvia) alone, the phylum can most certainly be considered speciose (Oceana 2004). Although other publications list gastropods having greater diversity, near 2/3 of the phylum at approximately 50,000 living species (Calfo & Fenner 2003). 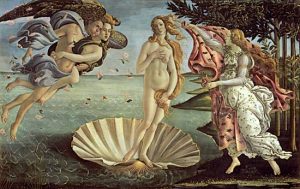 For thousands of years seashells have influenced society. The Birth of Venus painting by Sandro Botticelli has become one of the most famous painting of all time. Recognized around the world with the distinctive image of a woman (Venus) placed upon a bivalve shell. Photo provided by Wikipedia and is available for public use. 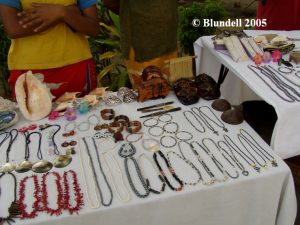 Villagers in tropical areas around the world create jewelry from the seashells common to the waters.

So what are seashells? Well they are obviously the skeletal remains of molluscs. These skeletal structures serve as protective barriers for the animal’s soft fleshy body. They are used for catching food, holding onto substrate, movement, body shape, and protection. How did they come about? We don’t know. 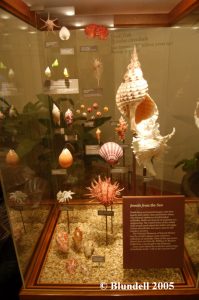 Seashells serve as educational tools as shown here in this museum display case.

Two main theories exist on the origin of seashells. Some scientists like Sean Brennan of the US Geological Survey postulate that incredibly high ocean calcium levels may have favored organisms that could excrete calcium as a waste particle. Of course, this waste particle being shell. This theory is supported by geologist Tim Lowenstein of State University New York. Lowenstein and colleagues have used x-rays to analyze water pockets that are millions of years old. This group has speculated that their findings of high calcium levels about 540 million years ago may have been responsible for the “Cambrian Explosion” of shelled organisms. 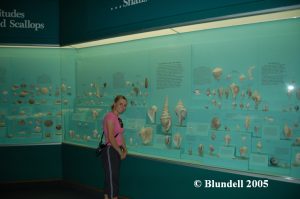 Shown here Marzena Blundell examines a display of seashells in the Smithsonian Museum of Natural History.

The second popular theory of shell origin is of course for defense mechanisms. This theory is supported by Steven Stanley of Johns Hopkins University. Looking at molluscs of today the function of defense is undeniably existent. However the defensive needs of early shell producers is unknown. Additionally, there exist high costs involved in producing shells. If ridding calcium were the only purpose than a precipitate crystal would be excreted. The fact that animals invest energy into making and maintaining these shell structures indicates that they are receiving some sort of benefit from them. 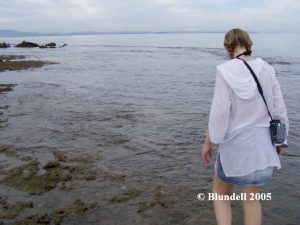 Marzena Blundell shown doing what she does best, looking for seashells.

While the debate continues on the origin of seashells, some things are certain. By looking at the shells and the animals which produce them we can certainly learn a lot about these wonderful creatures. Weather used as decorations, clothing, or currency, these items are continue to serve an important role in societies around the world. 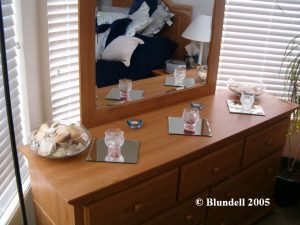 Seashells are frequently seen in houses as decorations. Here shells are displayed in glass bowls. 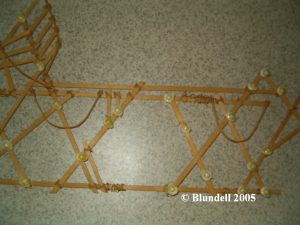 This image is of a map used by Indo-Pacific fisherman. The shells represent islands and the sticks represent water currents. This map was presented as a gift to the author.

This article is dedicated to my wife, Marzena Blundell. She is truly a lover of the sea and her appreciation for seashells is unmatched. Raised at sea as a pirate, she has grown into a great beachcombing conchologist and advocate for marine ecosystems. If only everyone could enjoy the oceans as much as she. 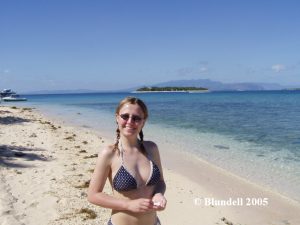 This article would not have been possible without the help and encouragement of Aric Blitch. His contributions with the paleogeographic information were vital. My sincere thank you to Aric for inspiring this project.

Additional appreciation is owed to the wonderful folks on Blundell Street, London England; their publications foster appreciation for all marine life.

Funding for this project was provided by the Aquatic & Terrestrial Research Team.

Adam Blundell M.S. works in Marine Ecology, and in Pathology for the University of Utah. He is also Director of The Aquatic & Terrestrial Research Team, a group which utilizes research projects to bring together hobbyists and scientists. His vision is to see this type of collaboration lead to further advancements in aquarium husbandry. While not in the lab he is the president of one of the Nation’s largest hobbyist clubs, the Wasatch Marine Aquarium Society (www.utahreefs.com). Adam has earned a BS in Marine Biology and an MS in the Natural Resource and Health fields. Adam can be found at adamblundell@hotmail.com.