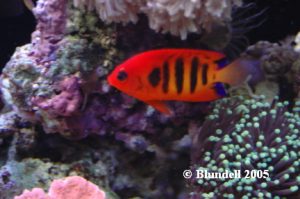 The hobby has evolved heavily during the past two decades. One of the trends that I have frequently noticed is the increased emphasis on cohabitant relations. This trend is leading away from the “can I keep this alive” attitude of the past. In my opinion this is a great trend for the hobby to see.

The idea of what is “reef safe” has come about as aquarists have become more adept to keeping marine organisms. No longer worrying about general tank set up and care, modern hobbyists are now focusing their attention on what creating ecosystems which continue to develop and expand. They are all to be commended for these efforts.

However, with the development of complex (and usually expensive) ecosystems comes greater concern. It is generally safe to say that hobbyists don’t want to purchase an organism that will destroy/eat/kill/poison/harass other tankmates. Thus the question that people ask before purchase “is it reef safe?”. 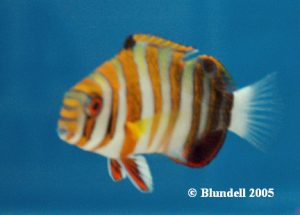 Large wrasse such as this Harlequin Tusk will feed on large shrimp and invertebrates in the aquarium. Meanwhile smaller wrasse are generally considered reef safe as they tend to only eat micro crustaceans.

Unfortunately we can not answer that question without first knowing what “reef safe” means. The definition of which is dependent upon the person you ask. This gradient goes from “all fishes and invertebrates are eating the reef and are not reef safe” Ã  “most things on a reef are not reef safe” Ã  “most things you find on a reef are safe” Ã  “all reef fishes and invertebrates are part of the reef and all are safe”. The general guiding factor here is if you feel that feeding on the reef is part of the reef, or if that is damage to the reef. Rather than dwelling on this further, I would rather get into some examples and categories of aquarium fishes. I’ll tackle invertebrates later.

If a fish eats coral is it reef safe? Again it depends on whom you ask. Most aquarists draw the line here and say animals that eat coral are not reef safe and do not belong in their aquariums. The majority of aquarists are careful to avoid such species, they are not collected nor imported heavily because of the lack of a market for such items. 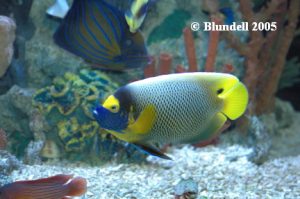 Fishes that nip at coral

This category of fishes is generally perceived in a similar fashion to those that simply do eat coral. There are many hobbyists who aren’t bothered by a fish nipping at an acropora colony now and then. To them, this is just a natural part of having a marine tank with beautiful fish and corals. Of course we have all met that friend who is willing to tear down their entire aquarium to catch one troublesome fish that is nipping at polyps. Often times competition from highly stocked tanks, a lack of macro algae, and competition for limited food influence these fishes to look for other food (in this case coral) sources.

This category of fishes is not heavily discussed. Most fishes purchased for the home aquarium are known to be what we call “community fish” meaning they cohabitate in peace with other fishes. Fishes that do not fit into this category are typically known by consumers as “aggressive fish” that belong in aquaria with other large and non-peaceful fishes. Very popular in their own regard, aggressive fishes are typically not misplaced or used in reef aquaria. 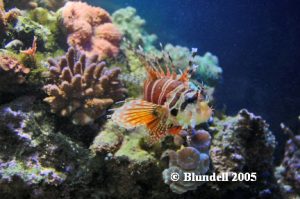 Lionfish are considered by many hobbyists to be completely reef safe. Although they do not feed on coral they will eat small fishes and invertebrates if they are present.

This category is the most difficult for me to assess. I feel quite confident in saying that all marine fishes eat invertebrates. In fact I’ve yet to find a fish that didn’t want live mysis shrimp and copepods. However, mobile invertebrates (crabs, shrimp, worms, snails) all live in harmony in the reef aquarium. Needless to say most aquarists keep invertebrate eating fishes without worry of losing their ornamental invertebrates. Therefore I guess to classify these fishes we need to assume we are talking about fish that will not only eat microcrustaceans but will also consume larger species.

These fishes are universally considered to be reef safe fish. In fact they are often recommended and publicized as useful inhabitants to reef aquaria. Of personal note, the recommendation of such fishes is worrisome to me, as I fear the overgrazing and lack of macro algae that is often observed in home aquaria. None the less these fishes are quite popular and suitable for home aquaria. 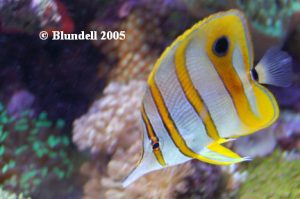 Copperband butterflies were historically considered to not be a reef safe fish. However today many hobbyists consider these fish to be beneficial to the home aquarium.

These fishes are universally considered to be reef safe fish. In fact they are often recommended and publicized as useful inhabitants to reef aquaria. Of personal note, the recommendation of such fishes is worrisome to me, as I fear the overgrazing and lack of macro algae that is often observed in home aquaria. None the less these fishes are quite popular and suitable for home aquaria.

Fishes that only eat prepared foods

Don’t kid yourself, these fishes do not exist. It is true that many fishes readily accept prepared foods, but to think that they are obligate prepared feeding fishes is delusional. Fishes are adapted to eating certain foods in natural settings, and will certainly eat those items in captivity (usually meaning micocrustaceans). 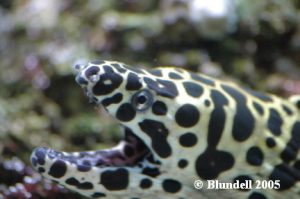 Eels are best left out of the reef tank. Their need for specific rock structures, aggressiveness, and ability to eat tank mates usually precludes them from the average hobbyist reef aquarium.

While guidelines certainly exist on fish species more or less likely to be successful in the marine aquarium, deciding if something is reef safe to you personally is the key. For many aquarists losing a coral polyp here and there is no big deal. To other aquarists complete capture and removal of a fish seen near a prized coral is necessary. In my years of experience I have come to the final conclusion on what people consider to be reef safe and non-reef safe. If it eats something you have plenty of or don’t care about, it is reef safe: if it eats something you have to pay money for it is not reef safe.

Adam Blundell M.S. works in Marine Ecology, and in Pathology for the University of Utah. He is also Director of The Aquatic & Terrestrial Research Team, a group which utilizes research projects to bring together hobbyists and scientists. His vision is to see this type of collaboration lead to further advancements in aquarium husbandry. While not in the lab he is the president of one of the Nation’s largest hobbyist clubs, the Wasatch Marine Aquarium Society (www.utahreefs.com). Adam has earned a BS in Marine Biology and an MS in the Natural Resource and Health fields. Adam can be found at adamblundell@hotmail.com. 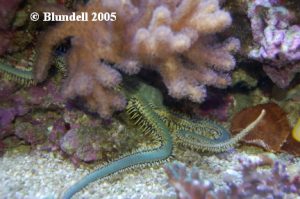 These sea stars are often accused of eating small fish in the home aquarium. While that may or may not be true, most hobbyists still consider them to be beneficial in removing waste products in the aquarium. 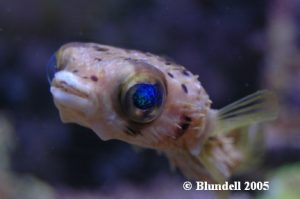 Pufferfish make excellent reef aquarium fish. That is unless you plan to keep small invertebrates or clams. A clam like the one pictured here can be a quick meal for many pufferfish. In regards to corals and polyps, pufferfish fair well and can be kept with corals in harmony. 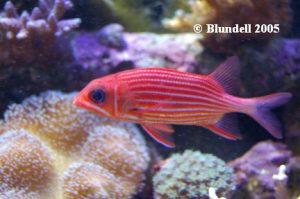 Squirrelfish often eat small invertebrates in the home aquarium. However they do not bother corals and can be found in several beautiful display tanks. 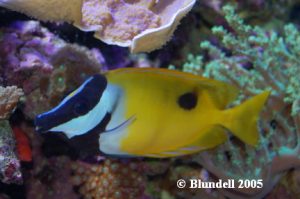 Rabbitfish are excellent reef aquarium fish. These fish serve a very important purpose of grazing on algae in the home aquarium. 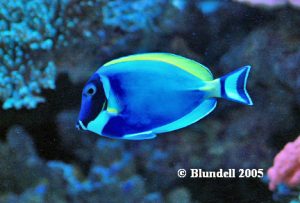 Similar to Rabbitfish, the Tangs are also excellent reef aquarium fish. Some tangs like the Yellow Eye tang shown here are very hardy and make excellent tank mates. Other tangs like the Powder Blue are sensitive to water quality and should be left for the more advanced hobbyists.