The Serranidae is a family of mostly marine, tropical and temperate fishes consisting of more than 500 species. The family includes the subfamilies Anthiinae (Anthias their close relatives), Epinephelinae (most of the large groupers we like to eat, as well as some of their smaller relatives that we dream of keeping in our tanks such as Liopropoma, Beloniperca, and Rainfordia), and the Serraninae which includes the black seabass as well as a number of small reef-associated bass species. Distinguishing characteristics of the Serranidae include a large mouth with exposed maxilla, three opercular spines, 7-11 spines in the dorsal fin with spiny and soft dorsal fins usually continuous, and three anal fin spines. In the species accounts below, meristic counts will be provided only where they are important for distinguishing similar species. 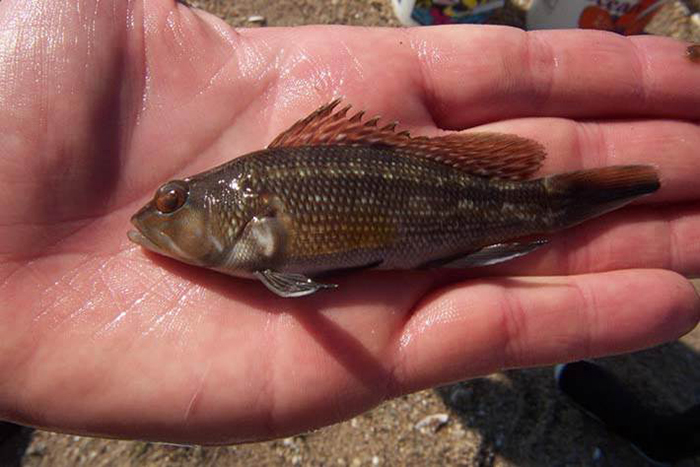 In New York waters, the black seabass (Centropristis striata) is the only member of the Serranidae that can be considered a native species, in that it can be found here in all its life stages and occurs here throughout the year. The black seabass is a prized food fish and is often exhibited in public aquaria, however it is not suitable for the home aquarium as it requires cooler temperatures and grows into a large predator (up to 66cm). Furthermore New York State law prohibits taking immature black seabass less than 35.56cm (14in).

So why am I devoting an entire article to the Serranids of New York if we only have one species? Well, as you may know from reading some of my previous articles or from my regular reefs.com blog posts titled Long Island Collecting Log, I have a mild obsession with the tropical fish species that “stray” into our waters each summer. So, if we include the warm-water species that are only found in New York during the summer and fall, there are actually at least 12 species found here, making the Serranidae one of the most represented fish families in our area (second only to the Carangidae, another largely tropical family with at least 16 species recorded in New York!).

The coney, Cephalopholis fulva, is a small (up to 40cm), tropical western Atlantic grouper with small blue spots over most of its body. The background color varies from reddish brown to bright yellow and some individuals exhibiting a two-toned (brown/yellow) color phase. Two black spots on the chin and two black spots on the caudal peduncle clearly distinguish the coney from other small spotted groupers. C. fulva is rare in New York. The only local observation known to me is from a dive in Fire Island inlet in 2003 while on a collecting trip with the Long Island Aquarium. Unfortunately, that individual eluded capture. 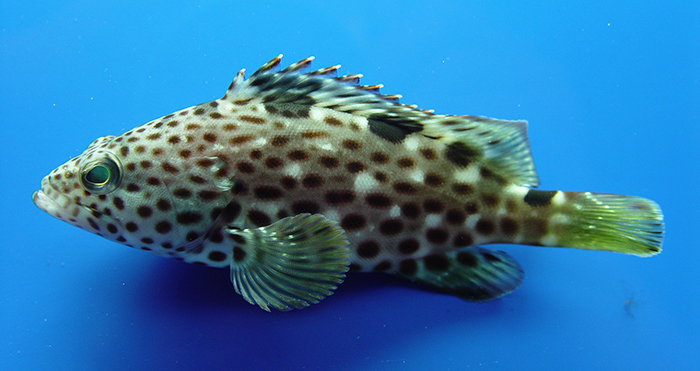 The rock hind, Epinephelus adscensionis, is a medium sized grouper, reaching a length of about 60cm. Its body is covered with reddish-brown spots on a tan, olive, or gray background. Juveniles may also have a number of white spots on the body. There are 2-4 large black saddles on the dorsal surface, beginning under the spinous dorsal fin. The posterior-most saddle, when present, is on the caudal peduncle. This attractive grouper makes a regular appearance in New York and can be found as far north as Massachusetts.In New York, juvenile rock hinds can be found in eel grass beds and around hard structures such as pilings and jetties. I have found E. adscensionis to be one of the more peaceful groupers in aquarium settings however it will eat any fish small enough to fit into its mouth.

The red grouper, Epinephelus morio, is a larger species and an important food fish. It reaches a length of 125cm. The background color is reddish brown, with a variable pattern of blotches, stripes, and bars that can appear or disappear almost instantaneously. Juveniles often have several small black spots on the head and white edges on the soft axial fins. A pattern often emerges on the body and head of the red grouper that is distinctly similar in appearance to that of the Nassau grouper (Epinephelus striatus). E. striatus can easily be distinguished from E. morio by deep notches in the interspinous membranes of the dorsal fin and the presence of a black saddle on the caudal peduncle. The red grouper is relatively uncommon in New York. I encounter one or two each year, usually while diving along jetties, docks, or rubble piles. In 2015, a single seining trip near Fire Island inlet produced 16 red groupers. It is difficult to say whether this is a sign of increased incidence in our area or simply an exceptional year for this species. 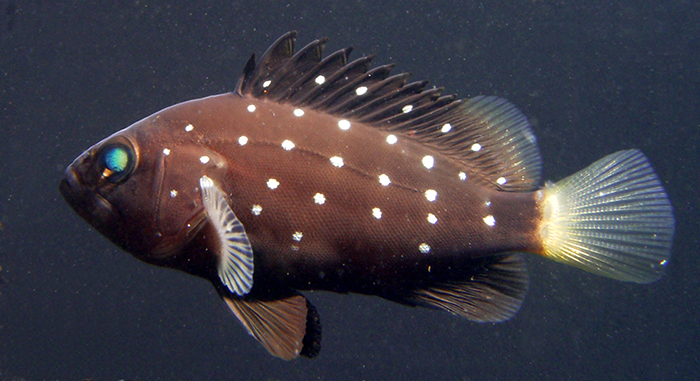 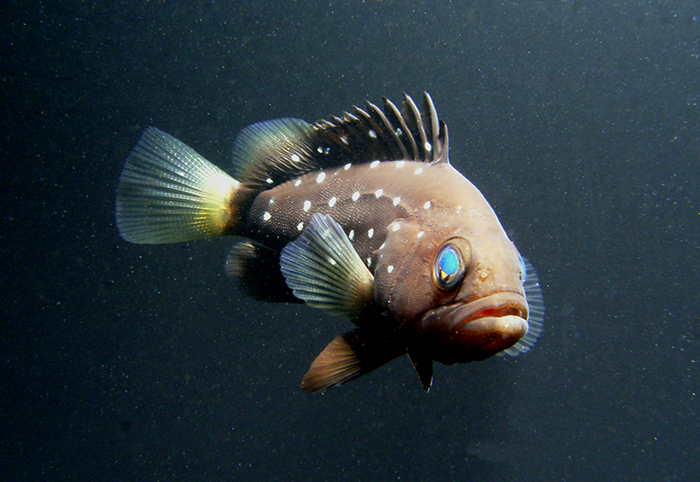 The snowy grouper, Hyporthodus niveatus, is one of the most common groupers in our area. Juveniles are usually black with a pale yellow caudal fin and white spots arranged in approximately 8 vertical rows, dispersed evenly across the body. The black background is subject to fading, and when it fades, a black saddle can be observed on the caudal peduncle. The saddle is not present in adults. 11 spines are present in the dorsal fin. H. niveatus reaches a length of 120cm, but specimens collected in New York are rarely larger than 15cm. The snowy grouper is common on rock jetties and other hard surfaces. They are also commonly collected using seine nets in eel grass beds. The bright coloration of the juvenile snowy grouper makes it very popular with inexperienced fish collectors who are usually unprepared for their voracity and rapid rate of growth. 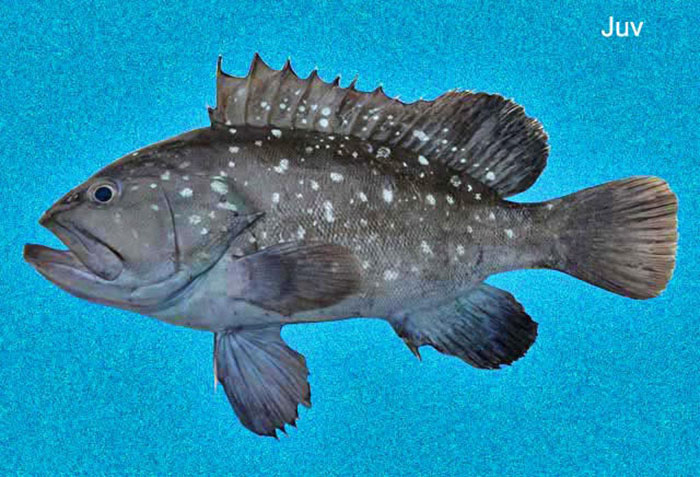 Although I don’t have a verified record of the Warsaw grouper, Hyporthodus nigritus from New York State, I am including it here because I have an entry in my collecting log from 1989 of a very small juvenile grouper that I tentatively identified as such. Furthermore, Robins et al. lists H. nigritus as ranging to Massachusetts, so although it is uncommon, it likely occurs here. Adults are dark brown with no distinctive markings however juveniles are similar in appearance to snowy groupers. In H. nigritus, the white spots are more irregular in shape and distribution, and there are only 10 dorsal spines. The Warsaw grouper reaches a length of 230cm.

The scamp, Mycteroperca phenax, may be the most common serranid in New York waters after the fully native black seabass. This medium-sized grouper reaches a maximum length of 107cm. The color is variable in adults, but juveniles observed in NY are consistently colored pale brown with reddish-brown spots, forming small clusters and extending into the median fins. There is a bony lobe at the lower edge of the preopercle. Meristic counts are identical or overlapping with M. microlepis, however the distinct pattern of spots is persistent M. phenax, whereas in M. microlepis, the reticulated pattern often fades causing the fish to be nearly uniform grey. Post-larvae and juveniles are very common in eelgrass beds beginning in June. Larger juveniles become more abundant on rocky bottoms as the season progresses.

The sand perch, Diplectrum formosum, is a small (up to 30cm) serranid that is not easily confused with any other groupers in our area. The body is pale with irregular light blue and yellow lines which are most conspicuous on the head and dorsal fin. A dark lateral stripe and several dark vertical bars are often present but these markings can disappear and reappear rather quickly. The body is more elongate than any serranid found in New York and there are 10 dorsal spines. The sand perch is an infrequent stray in the northeastern US. It is most often found perched on sandy bottoms. When I have encountered D. formosum while diving, they have invariably been associating with small aggregations of similarly-sized black seabass. 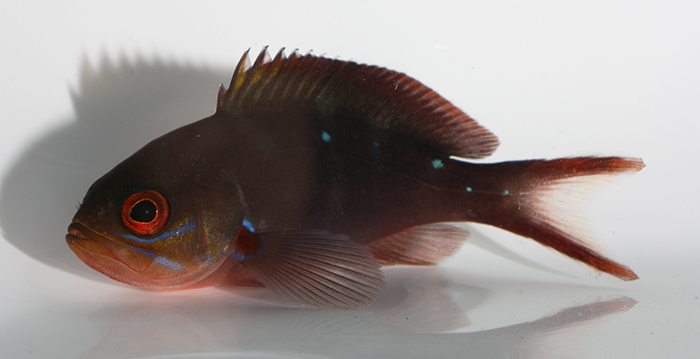 The creole fish, Paranthias furcifer, is only known in New York from a single specimen collected by my friend, Bob Jankie in Moriches Inlet in 2011. It is a small pelagic bass that reaches a maximum length of 30cm. In its native range in the tropical Western Atlantic and Caribbean, the creole fish forms large midwater aggregations over reefs and other hard bottoms. The color is variable, but most often reddish brown with a bright orange spot at the base of the pectoral fin and three or four widely-spaced white or blue spots between the lateral line and dorsal fin. The caudal fin is deeply forked. 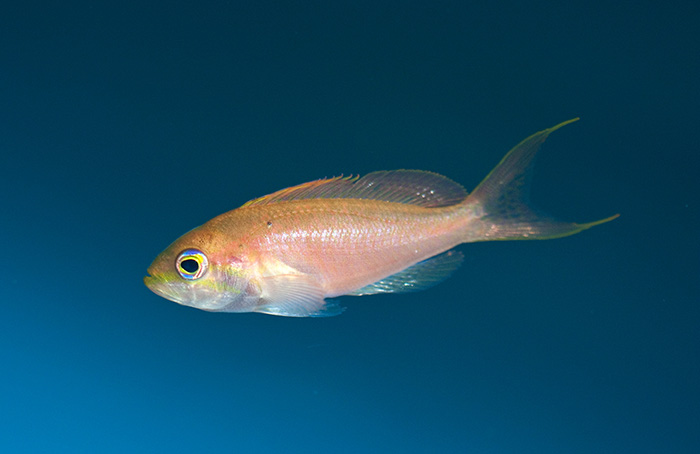 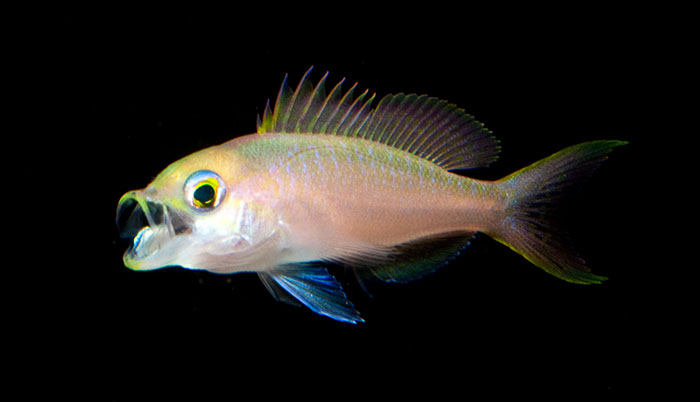 The streamer bass, Baldwinella aureorubens, is known in our area from two specimens caught in Shinnecock Bay, also by Bob Jankie (who obviously has an eye for exotic serranids) in 2013 and 2015. Both specimens were caught on wood dock pilings in approximately one meter of water. The normal depth range for this species in the tropical Western Atlantic is 120-610m. It has a typical Anthiine body shape with a deeply-forked caudal fin. Color is reddish or orange with yellow highlights, becoming pale ventrally. I am unable to find photos of a living adult specimen and details on color are scarce in published descriptions. The specimen from 2013 was identified using DNA sequencing. 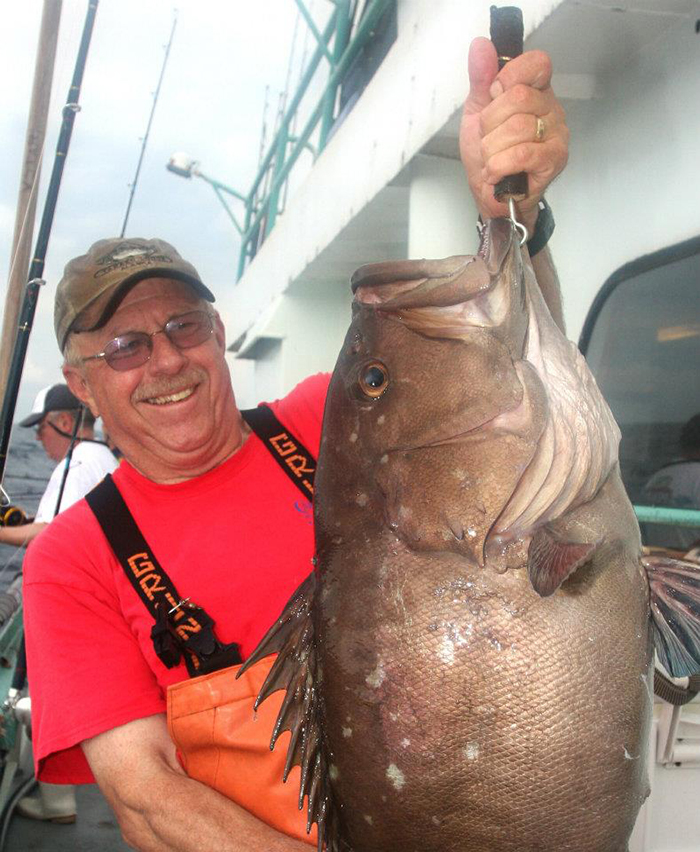 Jerry McGrath holding a snowy grouper aboard the Viking Starship out of Montauk, NY.

There are certainly other species of grouper that can be found in New York waters, but this article covers only those for which I have direct evidence. Most of the species discussed here (excluding the black seabass), are obviously strays from the tropics, doomed to succumb to the cold at the onset of winter, however, recent observations have given me reason to believe that at least two of them may be using the Northeast US as a nursery ground. First, the sheer numbers of snowy grouper, Hyporthodus niveatus and scamp, Mycteroperca phenax puts them in a separate abundance class than most of the warm-water species that occur here. Furthermore, adult groupers, including H. niveatus are increasingly being caught by recreational fishermen as far north as New Jersey in an activity that has been growing in popularity in recent years: bottom fishing in submarine canyons on the continental shelf. This places potential spawning grounds much closer to New York than previously thought. Finally, a personal observation I have made is that near the end of the season for tropical fishes in New York bays, snowy groupers and scamps, which are normally territorial and well-dispersed on suitable habitat in the summer, begin to form aggregations in the inlet in October when the water temperature is starting to drop. It’s only a vague hypothesis at this point, but this may signal preparation for an off-shore migration. If any of the groupers appearing in New York during the summer are here as a natural part of their life cycle, and not permanently removed from the gene pool as has been assumed for many years, it would be extremely important for fisheries managers to figure this into their management plans. These are commercially important food species that are strictly regulated within what is presumed to be their native range. 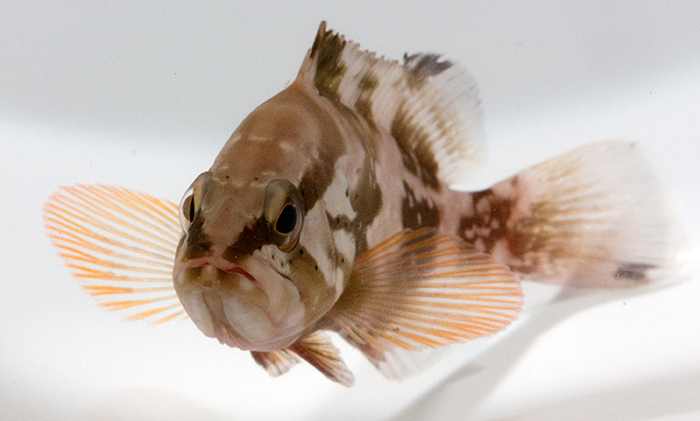 Of course, some of the smaller and more exotic species discussed here probably are strays and are much more suitable for the home aquarium. So if you have an opportunity to stick your head in the water and try to catch, or just observe some of these beautiful fishes, I strongly encourage it. As always, please be sure to obey all local collecting and diving regulations and be courteous to your fellow fishers.