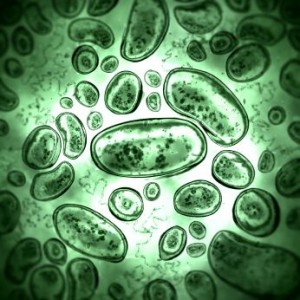 You can’t see the most important organisms within your reef tank. You can’t see some of the most important organisms on your body either. Why? Because they are microbes, tiny single celled organisms that arrived on Earth billions of years ago, as inorganic carbon became simple sugar. At any point during the day, there are millions and millions of microbes all over and throughout your body, and countless numbers within your reef aquarium. Believe it or not, these organisms are reef filtration, and the future and past of captive marine aquarium water quality lies in our understanding, and ability to selectively cultivate these organisms. Science is studying marine microbes for a variety of exciting purposes, from generating fossil fuels to curing disease. Various marine microbes even hold within them the promise of reversing the disastrous effects of climate change, restoring health to various coral and sponge species. For aquarists, we cannot deny our intimate relationship with these microscopic organisms, and our ability to successfully keep marine life healthy hinges largely on our ability to nurture them. 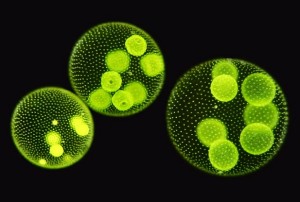 The term “marine microbes” refers to any and all microorganisms found in seawater. Most of these are a cellular falling into one of three categories: viruses, prokaryotes (bacteria) and protists. Each of these groups varies considerably, when looking at each individual group’s intriguing biology. These microorganisms are found in almost all marine waters, and play every ecological role imaginable. Most important however, in both wild marine ecosystems and our aquariums, is forming the base of the food chain. 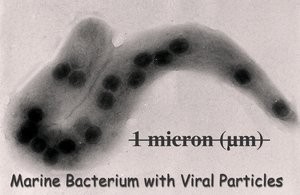 Viruses are deceptively simple organisms, little more than nucleic acid with a protein container. They are a parasitic particle, attaching themselves to a living cell and injecting a bit of nucleic acid. This acid runs through the cells, instructing each to create another virus. They are incredibly abundant in sea water, with 5 ML of seawater serving as home to 50 million viruses. Most marine viruses are bacteriophages, meaning that they prey on bacteria.

These organisms lack a distinct nucleus, meaning that their DNA is not bound within a membrane sac in the cell. For many years prokaryotes were simply referred to as bacteria, but fairly recently they were broken into two groups, archeabacteria and eubacteria. There are no fundamental differences in either group’s physiology or ecological role, although archeabacteria appear to inhabit extreme deep-sea habitats.

Most bacteria gain their energy from either absorbing dissolved marine organic matter through the cell membrane (osmotrohpy), or some form of photosynthesis. In 5 ML of seawater there are about a million of these bacteria. 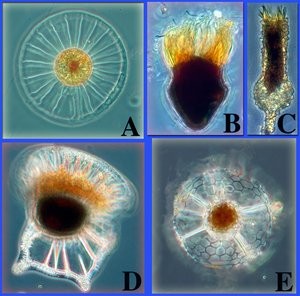 Protists are eukaryotic, possessing a membrane bound nucleus, but are single celled (a cellular) organisms. Protists are a group of organism related by what they are not (muti-cellular), rather than a particular ecological role. Protists contain chloroplasts, allowing them to photosynthesize, and often inhabit the shallow sunlit waters of worldwide coral reefs. These organisms feed by acquiring pre-formed organic matter and exist in numbers of about 1,000 per ML of seawater. 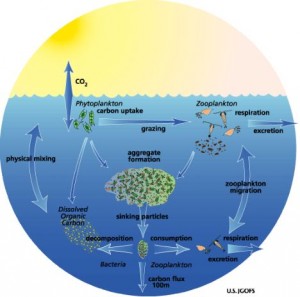 A marine aquarium is a blank slate, when the aquarist first converts freshwater to saltwater. Using a bacterial booster, we begin adding many of these organisms that form the food chain of our aquatic ecosystem. Primary production is the creation of organic matter, whether it is organic ammonia, carbon, etc. It occurs when inorganic carbon becomes simple sugars using solar energy via photosynthesis. Like the big bang that created the universe, this activity marks the creation of a marine aquarium. On land primary producers take on the role of grass, bushes and trees. Though in the sea, primary producers are invisible, because they are microscopic and we can only see animals and organisms higher up on the food chain.

In the ocean, and within our aquariums, the most abundant and important primary producers are of the genera Synechococcus and Prochlorococcus. These are capable of reproducing once per day, creating most of the plant biomass in the open sea.

Their role in the aquarium: 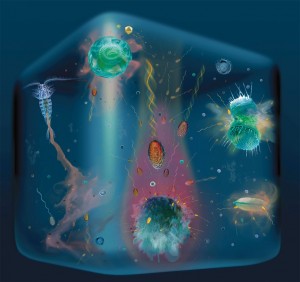 Marine microbes are by far the most diverse and beneficial organisms in our aquariums. They play a vital ecological role in everything from ph stabilization on up to nitrate reduction. Microbes also play important roles in the life of higher life forms, such as sponges, that form unique symbiotic relationships with various microbes. Studies are taking place right now, looking into the role microbes play in coral DNA synergy and the reproduction of various coral species. It is theorized by some scientists that microbes could be responsible for various coral traits, from coloration, shape on up to growth pattern.

We know that microbes form the food chain, and most aquarists have an intimate knowledge of the ammonia cycle. This is a highly watered down explanation of how ammonia is converted to nitrite, nitrite to nitrate, and finally nitrate into harmless nitrogen gas. What we often don’t realize is that microbes within our tank exist in a hidden world, which affects the health of all of our animals, even when we don’t see it.

An example would be a sudden nitrate spike. There are many reasons something like this can occur in the aquarium. It’s very likely caused by the sudden die off of massive amounts of anaerobic bacteria, whether they are in a reactor chamber or within live rock. As I said, marine viruses out number bacteria by a considerable amount, so it’s entirely possible a bacteria infesting virus has begun killing off the tank’s anaerobic bacteria population.

Right now studies are mapping the genomes of marine microbes, in hopes of learning more about the specific roles these millions of different organisms play. As the future unfolds, we are learning more about the potential these tiniest of creatures hold. It is entirely plausible that one day, bacteria additives will exist that can easily create perfect water conditions in which to raise corals. Also, it’s entirely plausible that one day, aquarists will be able to generate certain traits within their corals by harvesting various microbes within their tanks. In fact, this is already taking place, whether or not we fully understand it.

It’s critical to take these crucial organisms into account, when deciding on water treatments or filtration options. In many ways, it is marine microbes that will decide our success or failure as marine aquarists, and many of us don’t even know the basics of their existence.