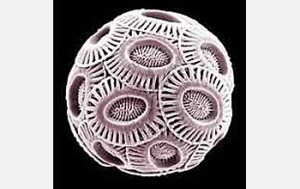 In expanding on my previous post about marine microbes, I thought I would dive a little deeper (no pun intended) into this subject. As I said in my last post, many aquarists don’t know the basics of marine microbe existence, mainly because it’s not often discussed in detail. I often advise aquarists to view their systems as one living being. Every part of the aquarium from filtration, to live rock, on up to livestock is part of that being, and must remain healthy for the entire system to function. The basics of that in the aquarium is the same as in an animal’s body, or natural ecosystem, and it begins at the microbial level. In learning more about how microbes affect our marine aquariums, let’s take a look at one group of microbes.

As I pointed out before, most marine viruses attack bacteria. We often associate viruses with getting sick, having a negative impact on an organism or ecosystem. In the case of marine viruses, they play a vital role in the breakdown of organic material. A liter of seawater that contains 10 billion microbes usually contains 100 billion viruses, so it’s clear that viruses make up a huge portion of marine microbial life. 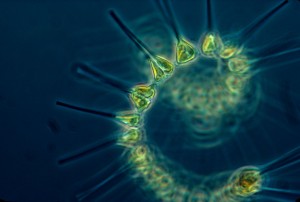 For a long time, researchers have believed marine viruses to be extremely host specific, meaning that they target a specific microbial bacteria lineage. In 2003 however, studies confirmed that various viruses attacked not only different species of cyanobacteria within the same genera, but also different genera of cyanobacteria as well. This shows that viruses are not limited to specific host genotypes, species or even genus. It also points out those marine viruses, which are present in our aquariums, may have broad reaching effects.

How viruses effect the assimilation of nutrients:

The death of a host cell due to viral infection, and the subsequent release of viral progeny are one way that viruses affect marine ecosystems. The destruction of microbes also releases carbon and other nutrients into the environment, which were previously tied up as cellular materials. Other microbes than assimilate these excess nutrients, leading to a paradoxical consequence of viral infection: the death of one host microbe may benefit another microbe. 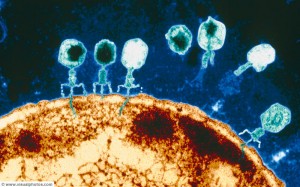 Scientists have documented what is called “viral priming” using microbes that exist near the ocean’s surface, around coral reefs. Viral destruction of infected bacterium released organic iron complexes which were immediately taken up by other microbes, as well as diatoms (unicellular eukaryotic algae).

Think of this in terms of a cyanobacteria outbreak. In this instance, one group of microbes has flourished, leading to the rise of dreaded red slime algae. If a virus was introduced, which killed the microbes causing the red slime algae, the organic carbon and materials from those microbes would be released into the aquarium. At that point, another group of microbes, perhaps those which aid in biological filtration, could get a boost from the death of the cyanobacteria. What is bad for one microbial cell is good for others, and the key to making marine viruses helpful in aquariums is determining what virus effects negative bacterial strains, and assist the reproduction and growth of those we seek to harvest.

Before the destruction of an infected cell, often extreme changes in metabolism are recorded. Virus induced changes in host metabolism are significant, so significant in fact that the infected bacteria is metabolically and biochemically an altogether different organism. An example is phage-infected cyanobacteria, which photosynthesize at a rate higher than non-infected counterparts. This changes their rate of fixation of carbon from the environment, possibly even changing the distribution of other elements such as nitrogen or phosphorous.

This means that a marine virus could be introduced to a marine aquarium, to alter the behavior of a specific microbe, making it break down phosphorous or nitrogenous waste faster. Since marine viruses can establish persistent infections within their host, infected cells could totally alter the availability of carbon and nutrients within the environment. It may be possible to use viruses to super power existing marine microbes temporarily, allowing them to perform amazing feats in regards to water clarity. When the original set of infected cells eventually dies, introducing more of the same cell when needed, would allow the virus to re-infect them, repeating the same outcome. This would allow aquarists to use marine viruses to complete incredible feats when applied to water chemistry, like the rapid breakdown of dissolved organic waste. There are many “bacterial-cleaners” on the market, which can reduce sludge in the aquarium, even boasting to extend the life of filters and water pumps. Using a marine virus you could boost the performance of those microbes, leading to an even stronger rate of performance.

The future for marine viruses and aquarists: 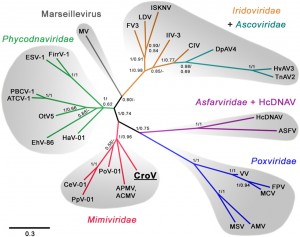 When we consider that marine viruses turn over 150 gigatons of carbon per year, more than 30 times the standing abundance of carbon within marine phytoplankton, one could easily say, the possibilities are endless.

For a brief glimpse at the world of marine microbes, and their role in maintaining water quality in the ocean, check out this video: