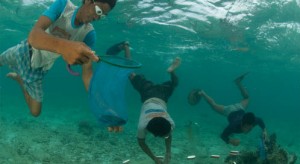 When a heavy hitting environmental news organization like National Geographic publishes an article, many in the general population assume it’s accurate, without questioning the statistics given. For marine aquarists, this article is of particular interest, as it suggests that the vast majority of fish imported into the U.S. have been caught with sodium cyanide. Most aquarists know that sodium cyanide delivers fish that die within our aquariums, long after a trail of dead coral and invertebrates are left behind on the reef. However, the practice has been made illegal in most countries that source marine fish, and National Geographic may have checked honest reporting and current statistics at the door, when they published this piece. 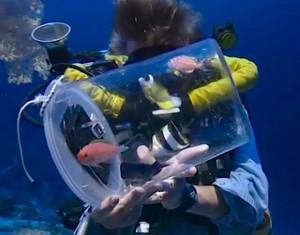 The Article
National Geographic published “The Horrific Way Fish Are Caught for your Aquarium – With Cyanide,” just a few days ago, on March 10th. Several extraordinary claims are made, starting with a statistic that “98% of – yes, almost all – species of saltwater fish, can’t be bred in captivity.” This is untrue, and totally discounts the work of Rising Tide Conservation and other breeding efforts that have made progress in propagating marine fish in captivity. I would have expected National Geographic to interview some of the scientists working to breed marine species, but they are conspicuously absent.

It goes on to state that, “Up to 90% of the [marine] tropical fish that enter the U.S. each year, are caught illegally with cyanide.” This is a false statement. While cyanide fishing still exists, among fisheries that supply live marine ornamentals, it has been greatly reduced and certainly doesn’t account for 90% of the fish that enter the U.S. If it did, there would not be a viable marine aquarium hobby, as the majority of marine fish would die.

Also stated under the heading “But it’s oh so lucrative”, is that “Live fish make fisherman a lot more money than dead ones, so more and more fishermen have turned to the fish-for-aquariums trade.” While in some areas, supplying fish for the aquarium is more lucrative than supplying them for the food industry, many of the collectors that supply marine fish live in poverty. I certainly wouldn’t call it lucrative for the collectors. 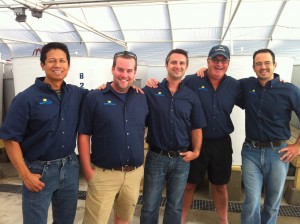 The Data
National Geographic claims that, “An estimated 70 to 90 percent of the 12.5 million tropical fish that enter the U.S. each year are caught illegally with cyanide, according to the National Oceanic and Atmospheric Administration and the United Nations.” In the article, the writer provides a link to the data used to conjure up this statement. The link leads to a UNEP (United Nations Environmental Program) report, that states, “70 percent of marine ornamental fish are caught with cyanide, in the country surveyed.” Interestingly enough, the only country surveyed was the Philippines. While the Philippines certainly provides a large percentage of fish to the marine livestock trade, it doesn’t provide them all. Even if they did, according to the UNEP report, 70% (not 90%) are caught with cyanide.

To make matters worse, National Geographic referred to this data as, “a recent study.” The study was concluded in 1997, 19 years ago. To state that a 19-year-old study is recent would be funny, if there wasn’t a possibility that many in the general public would buy it, hook, line, and sinker (no pun intended). This discounts decades of progress made in improving the standards within the Philippines marine livestock fishery. It also discounts decades of progress made by marine fish exporters, importers, wholesalers and vendors, whom have worked to weed cyanide captured fish out of their stock. While getting fish infected with internal or external parasites is still possible today, getting one that has been captured using cyanide is rather unlikely. National Geographic seems to have ignored that fact, and written a sensationalism report, based on antiquated data.

The article continues on by suggesting that 90% of marine aquarium fish imported into the U.S. are illegal under the Lacey Act. The Lacey Act makes it illegal to import animals into the U.S., that have been illegally collected from their source countries. Since many source countries for marine fish have outlawed cyanide fishing, importing fish captured with cyanide into the U.S. is illegal. The report Nat Geo used to cite this statistic, doesn’t appear to have any data behind it. The report Nat Geo links too, was published in 2008, but it’s highly likely it was released before then. If we look at a NOAA report for actual data, we find this, “The Marine Aquarium Council website reports that the International Marinelife Alliance (IMA) tested 48,000 fish in the Philippines to find that 25% of aquarium fish destined for the United States and Europe, and 44% of live groupers and humphead wrasse going to Hong Kong, were caught using cyanide.”

It may be safe to assume that cyanide collection in the Philippines dropped from 70% in 1997, down to 25% in 2008. Then why is National Geographic reporting that 90% of all marine aquarium fish are collected using cyanide? Let’s look at another claim made in the article, “98% – almost all – [marine] aquarium fish cannot be captive bred.” According to the earlier reports the writer used to compile estimates, the trade size was estimated at 1,400 species. National Geographic states that the marine livestock trade today, makes up about 1,800 species. Current information suggests that about 300 species of marine fish are being bred in captivity. Easy math, which divides 300/1800, shows that 17% of the species available to marine aquarists can be captive bred. While it’s wonderful that organizations are striving to improve that, 17% is a lot different than 2%. 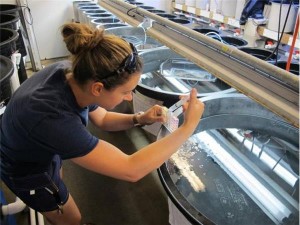 Why?
So why is a major news outlet, like National Geographic, citing decades old data as recent, and not following up on the current state of propagating marine aquarium fish? The answer may lie elsewhere in the article. The writer seemed to be gathering facts from The Humane Society and For the Fishes, two environmental organizations pushing for an end to the marine livestock trade. Both have been implicated in providing fuzzy numbers and questionable facts, to convince the general public and policy makers to either strictly regulate the ornamental fish trade, or end it completely. Rene Umberger (quoted in the article) has been very vocal, displaying a vested interest in the end of the aquarium fishery in Hawaii. You may remember a while back, it was Umberger who filmed Hawaiian fish collectors, and prompted one of them to rip out her SCUBA regulator and push her away. It was found that Umberger was essentially spying on fish collectors for Sea Shepherd Conservation Society. It would seem irresponsible for National Geographic to rely on claims from the likes of Umberger and The Humane Society, without conducting a single interview with scientists from Rising Tide, or aquarium related fisheries associations. However, in the case of this article, that is precisely what they did.

I’ll say it again:
As aquarists, we know that a single conservation outlet can have a powerful effect on the marine livestock trade. Look at recent events concerning Bangaii cardinalfish, where one conservation group, Wild Earth Guardians, was able to secure endangered species legal protection for a fish species. This is why it’s so vital that we have accurate marine livestock trade data, and that the industry is making sure to dot all I’s and cross all t’s. Even though this National Geographic article is nothing more than inaccurate sensationalism, it may fuel public outrage over the livestock trade, prompting policy makers to enact far-reaching legislation.