Does a Naturalistic Environment Reduce Stress in Aquarium Fish? 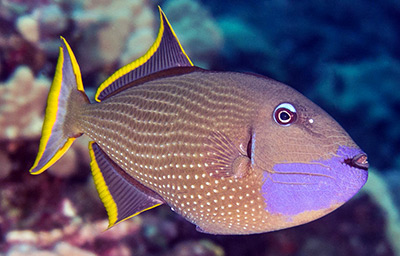 The blue-throat triggerfish (X. auromarginatus) in my aquarium exhibited repetitive behavior prior to transitioning the system to a reef

For today’s post, I’d like to elicit your thoughts on an interesting phenomenon I’ve observed in my aquarium, specifically an aggravating repetitive behavior exhibited until fairly recently by my pair of blue-throat triggerfish (Xanthichthys auromarginatus).

Allow me to set the stage: I introduced the blue-throats to my 125-gallon about a year and a half ago when it was still a FOWLR system. Their tankmates at the time included a one-spot foxface (Siganus unimaculatus), yellow tang (Zebrasoma flavescens), tomato clownfish (Amphiprion frenatus), and sixline wrasse (Pseudocheilinus hexataenia).

The repetitive behavior I’m referring to—and both the male and female exhibited it—was repeatedly swimming around the base of a powerhead mounted at the far left end of the tank (as I usually face it—you can actually view the tank from either side and one end) about 5 inches below the surface. They would swim in a circle 10, 15, even 20 times or more, briefly break away and swim about half the length of the tank, and then come right back to the powerhead to swim another set of “laps.” Both triggers fed with gusto and would swim up to greet me whenever I approached the tank, no doubt assuming more food was forthcoming, and sometimes they would stop the lap swimming and explore more of the tank for brief periods. But they would always revert to that same maddening behavior. I tried moving the powerhead next to my overflow box and closer to the surface so it would be harder to swim in a loop around it, but the triggers just wiggled their way through the narrowed pathway anyway. Afraid they’d get injured or flip out of the tank, I moved the powerhead back to its original location. MORE