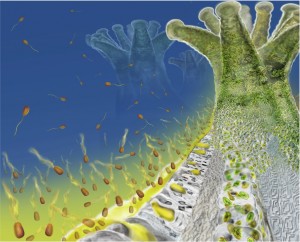 Most reef aquarists are familiar with coral’s symbiotic relationship with zooxanthellae algae. These tiny algae are responsible for providing corals with nutrition, in the form of sucrose which is over-produced during photosynthesis. Scientists have uncovered that coral’s have another (possible equally as important) organism living with them. In keeping in line with my recent posts on marine microbes, I thought it pertinent to discuss the relationship between corals and various species of marine bacteria. Many aquarists don’t realize the extent of this relationship. Various bacteria actually produce antibiotic which helps heal coral infections, and establish networks of bacterial communication, literally serving as coral’s microscopic caretakers. Since we are just beginning to understand the importance of microbes in the marine ecosystem, it’s also vital to understand how remarkably crucial earth’s tiniest organisms are to living corals. 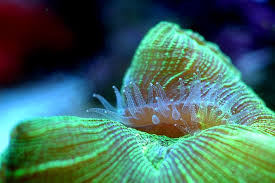 At MOTE: the marine laboratory and aquarium in Sarasota Florida, researchers set out to understand how microbes and corals interact. They first assessed a baseline of microbial communities within both threatened and healthy coral species. The goal was to understand what role microbes play in health and disease, and what benefits they provide to overall resistance and antibiotic production. Researchers paid careful attention to bacterial associations with coral that produced antibiotics, and other beneficial compounds. What they found, is that microbes literally communicate with the host coral, ordering events to take place at the coral’s surface. This complex symbiosis occurs between marine microbes, the host coral and zooanthellae algae. An entire network of communication and care provided by a multitude of organisms, including the host coral itself. 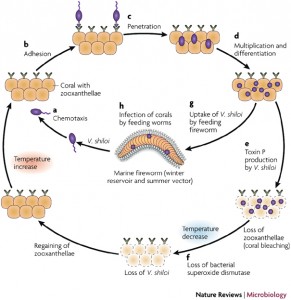 A bacterium was also found to produce gene transfer agents (GTA) which facilitate rapid acclimation to environmental change. This means that bacteria can aid new coral larvae in acquiring the genes required to adapt to a changing climate, or acclimate to a new set of environmental conditions. MOTE along with the University of South Florida’s Marine Science department have completely sequenced the genes of some of these highly beneficial coral bacteria. Right now, researchers are studying the biofilms created by Roseobacterials, to see how it may be applied to restoring reefs damaged by climate change, and preparing a future generation of corals for changing sea conditions.

Reef aquarists maintain strict parameters to ensure coral health, including dosing specific elements known to increase coral growth. We also limit nutrient build-up within reef aquariums, keeping a careful balance of growth within zooxanthellae algae. While all of these practices aids in maintaining healthy reefs, we often pay no attention to the complex network occurring between zooxanthellae algae, the coral animals and marine microbes, largely because we don’t know it even exists. If you consider that bacteria biofilms are providing antibiotic protection, and releasing compounds that enhance coral growth, an entire new methodology of reef keeping could emerge. Since scientists were able to sequence this bacterial genome, microbes could be cultivated that produce specific advantages for coral species. 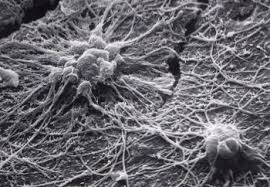 Imagine an additive that enhanced coral coloration, growth and even treated your coral in the case of infection. When thought about, our approach to coral health in the reef aquarium hobby is rudimentary. Corals that begin bleaching, lack growth or show signs of tissue recession are often dipped in solutions that indiscriminately kill microbes and complex pests alike. Some reef aquarists have even turned to using pesticides, such as Bayer Advanced, to rid their corals of flatworm infestations and other parasitic animals. Perhaps the reason so many aquarists experience a “hit or miss” situation when keeping various coral species, isn’t because of too many bacterial pathogens, but because the combination of the right microbes has been lost. If reefers had access to information allowing them to understand the bacterial symbiosis between corals and microbes, and re-create that within the aquarium, perhaps it would solve some of the mysterious challenges reef keeping presents.

I reached out to Dr. Kim Ritchie, one of the researchers, to pick her brain about the potential for microbes becoming available to reef hobbyists. I’ll keep you posted!