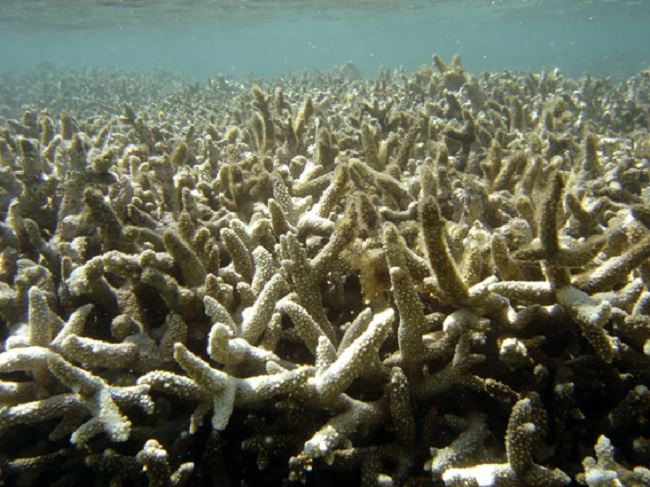 Over the last few decades, coral reefs have been in decline. It is clear that mass coral bleaching events (during which corals expel their endosymbiotic algae, or zooxanthellae) have contributed greatly to this loss. However, biologists have not been able to explain fully why some types of coral are more vulnerable to bleaching than others. Findings from a recent study conducted by an interdisciplinary team of scientists at the Field Museum of Natural History and Northwestern University may shed some light on this mystery.
Physicist and team member Vadim Backman describes the skeletons of stony corals as “optical machines.” In theory, skeletal form can influence how light is distributed within the coral polyp. Under normal conditions, species of coral with skeletal structures that scatter light most efficiently exhibit higher rates of growth than species with less reflective properties. However, during times of extreme environmental stress, the tables can be turned. When stressed corals shed some of their zooxanthellae, the remaining zooxanthellae may be damaged even more by intense, reflected light. Thus, corals that scatter light poorly (and grow slowly) are often better equipped at handling stress than their highly reflective (and fast growing) counterparts.

Researchers tested this theory by measuring light transport and light amplification within the skeletons of 96 different coral species. Measurements were made by way of a new technique developed by Backman that utilizes low-coherence enhanced backscattering (LEBS), a technology previously used to detect cancer.