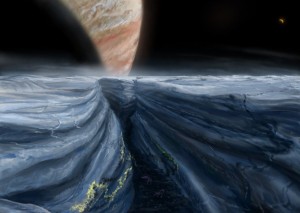 In 2014 Russian cosmonauts discovered sea plankton living on the International Space Station (ISS). While there isn’t an official consensus on how they got there, most scientists believe that uplifting air currents on Earth pushed the plankton into space. To the surprise of the cosmonauts, and the international scientific community, the plankton survived and was able to colonize visually sensitive areas of the ISS. The discovery has led to all sorts of theories, with some reaching into the realm of science fiction. Could animals within Earth’s oceans have descended from outer space? Could a meteor or comet carry planktonic life that then adapts to Earth’s oceans and forms a species hierarchy? For the most part, these questions remain unanswered and the sea life we have documented and studied all has terrestrial origins, having evolved and developed right here on Earth. Yet the fact remains, where there is liquid water, there is life. Staring out into the vast solar system, there is one place where a massive liquid ocean could churn beneath an icy crust, Jupiter’s infamous moon Europa. 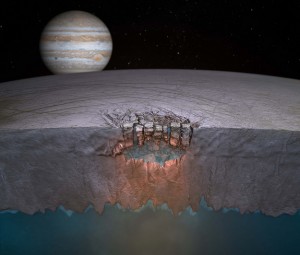 Long before the 2013 film Europa Report, I featured Europa in my 2010 debut novella Neptune’s Garden. In Europa Report a team of astronauts venture out on a mission to the icy moon, and in my novella Europa is the home of an ancient aquatic species of humanoid. In both instances Europa served as an alien ocean, full of biological wonders and otherworldly oceanic life.

In reality Europa is the sixth closest moon to Jupiter, and the smallest of Jupiter’s four Galilean (discovered by Galileo) satellites. Europa is in fact the sixth largest moon in our solar system, and was discovered in 1610 by Galileo. Europa got its name from the mother of Minos of Crete, whom was one of Zeus’ lovers. Europa is slightly smaller than Earth’s moon, and made of silicate rock with an ice-water crust. The moon is theorized to have an iron-nickel core, but astronomers and geologists aren’t certain what makes up the center of the small moon. Europa’s atmosphere is composed mostly of oxygen, and the moon’s surface is marked by streaks and cracks, with crater impact marks being rare on Europa.

Astronomers theorize that the icy crust on Europa is astrologically young, and the smoothness of this ice leads many to believe that a liquid water ocean exists under the ice. Anywhere on Earth where liquid water exists, so does life, leading researchers to theorize that Europa’s ocean serves as home to extraterrestrial life. Scientists theorize that tidal flexing, (tidal forces between an orbiting satellite and primary planet) causes Europa’s ocean to remain liquid, also causing geological activity similar to plate tectonics. In 2014 NASA filed a report stating that plate tectonics may occur within Europa’s icy shell, the first time such geological activity has been found on a world other than Earth. In addition, the Hubble Space Telescope has detected water vapor plumes rising from Europa. 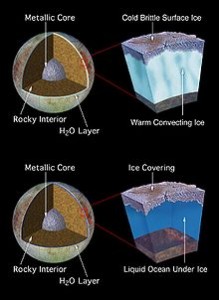 Scientists agree that a subsurface ocean does indeed exist on Europa, with heat from tidal flexing allowing the ocean to remain liquid. Since Europa’s surface is around -260 degrees F, the icy crust covering the moon remains as hard as granite, and is possibly 5 miles deep. Across Europa is something called chaos terrain, a mismatched jumble of cracks, crevices and other fissures. This suggests that areas of Europa’s surface have broken open with liquid water, only to freeze again and again, resulting in fissures so complex that understanding their origin is impossible. While several models of Europa’s composition exist, it’s the thin-ice model that directly points to a subsurface, ice-covered ocean.

This model suggests that Europa’s surface ice is only a few kilometers thick, or as thin as 660 feet. In this model its plausible that liquid water beneath the ice continuously breaks open, thus causing the chaotic terrain. Since Europa’s atmosphere is largely oxygen, scientists suggest that this oxygen may react with a subsurface ocean, where it could aid in biological processes. 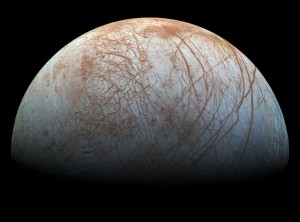 Right now Europa is a leading contender for the crown of celestial bodies that contain life. Scientists believe if a liquid ocean does exist under Europa’s ice, it may be very similar to conditions within Earth’s oceans, especially those close to deep sea hydrothermal vents. Just a few months back, in May of 2015 scientists announced that sea salt from a subsurface ocean may be coating some of Europa’s geological features, suggesting that the ice-ocean is interacting with a subsurface sea-floor. Testing these salts could prove important to determining if Europa’s environment is suitable for life.

It’s believed that the energy provided by tidal flexing would be insufficient to support a diverse, photosynthetic based population as seen in Earth’s oceans. 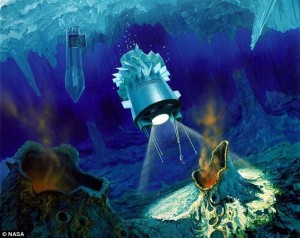 Attempts to study Europa further have had a tough time getting the green light, and even tougher time being put into effect. One suggested mission was the ice clipper, which would make a significant impact into Europa’s surface, creating a plume of debris which could then be collected by an orbiting spacecraft and returned to Earth for analysis. The Jupiter Icy Moons Orbiter was proposed as a fission powered spacecraft with ion thrusters. A small nuclear powered lander would travel alongside the orbiter, while also functioning as a communications relay with Earth. Sadly, the project was cancelled in 2006.

The Europa Orbiter was given a green light in 1999, but cancelled in 2002. The orbiter was to use a special, high powered radar to scan beneath the ice and render data on what exists below Europa’s surface. A proposal in 2001 called for a large nuclear powered melt-probe (cryobot) which would melt through the ice until it reached the ocean below. Once in the water, the probe would release an autonomous underwater drone that would gather information and transmit it back to Earth. As of yet, the mission hasn’t even reached the planning stage, and with an 80-billion-dollar price tag, it’s hard to imagine it setting sail anytime soon.

The sad truth is that scientists are using photos recorded in 1973 and 1979 to make predictions about Europa, and the high cost of studying Jupiter’s mysterious moon currently prohibits further research. Could the icy moon be proof that life can develop elsewhere in our solar system, or could it provide hints that life within Earth’s oceans has otherworldly origins? For now, only time will tell. Perhaps in several hundred years we will keep aquariums which are home to extraterrestrial marine life, full of unique animals from the ice cold oceans of Europa.