When I started this tank and got back into the hobby after a long hiatus, I told you, dear reader, that I would share failures as well as successes. As a scientist I have a deep seated sense of honesty and an extremely loud conscience when it comes to sharing failure. Failures can often be equally, if not more, instructive than successes.

Things were going very well, I had beautiful colonies of Acropora which were thriving. Regular water changes, skimmer worked great, lots of activated carbon,  etc. You all know the whole routine. But the water was never quite clear. Always hazy with a green tint. Things came to a head when a powerhead fell in the sediment of undissolved kalkwasser in the top off reservoir. The pH spiked to 9.10. I panicked. I could have gone the safe route and gotten a tank of CO2 to return the system to normal. But the CO2 was a trip away. I had another “solution” in house: vinegar. I used enough vinegar to bring the pH down to 8.30. The consequences were devastating. Likely much more so than if I had just taken the extra time and gone to get CO2.

Despite a 100% water change, the seeds had been sewn. A bacteria bloom was almost instantaneous, overnight, I suspect a DO crash began a bought of rapid tissue necrosis in several Acropora frags and colonies that had just been establishing themselves. Unfortunately, there is nothing mysterious about this. Commence the hard work. Water changes, clarifiers, carbon, etc. etc. One of the great things about such a small tank is that 100% water changes are a snap.

The bloom cleared up. The water was actually clearer than it had been since I started the tank. Recession on the pieces I could save stopped. I thought I was out of the woods.

Commence mystery. A few days of blissfully clear-as-air water, and suddenly I came home from the lab to find pea soup. A green water bloom so thick I couldn’t see front to back in a 20 gallon long.

Normally, this would be a no brainer, something was dead and rotting, or I was overfeeding, etc. etc. Small tank + death = algae bloom. However, I had not been feeding anything. Nor could I find anything dead aside from corals that were continuing to recede very very slowly. Many of them were losing their color. It was either time to through the hands up or work through it.  This was unlike anything I had seen during my days as a professional aquarist. The worst part, of course, was that all my parameters were “perfect” for SPS. 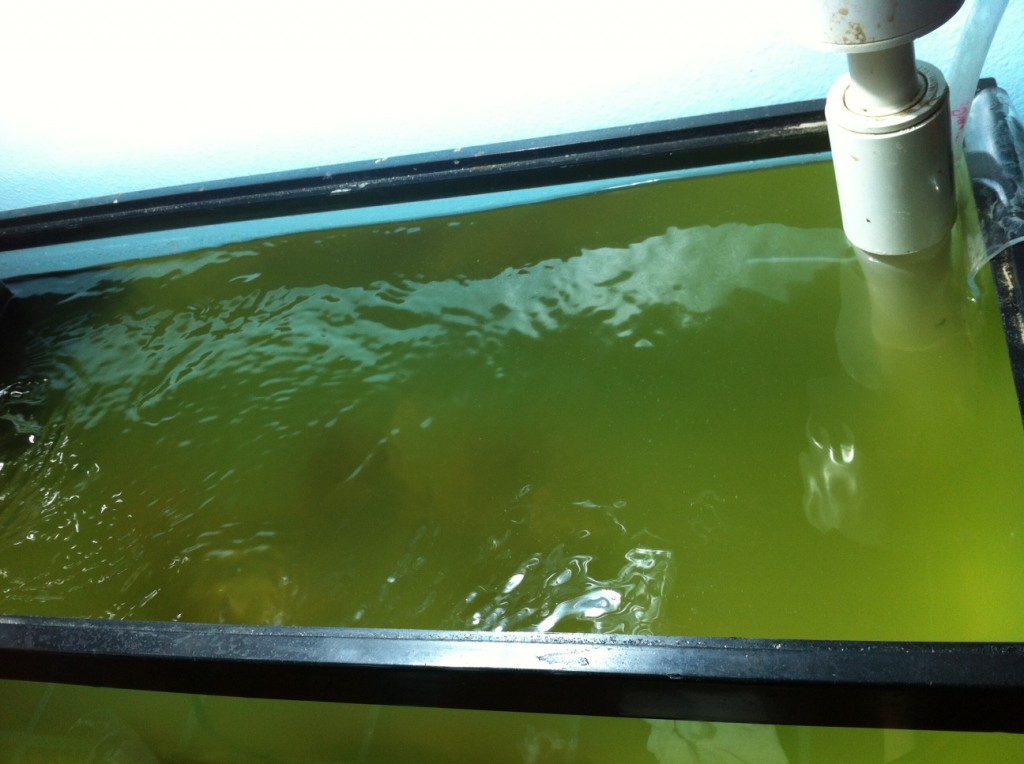 I got down to the dirty work. I used enough clarifier and quilt batting to knock everything possible into clumps. I diligently washed the batting every hour or so. Then I added massive amounts of carbon. Then I siphoned every trace of detritus… and the kicker… I added a 9 watt UV sterilizer.

Right now the tank looks great. Recession has stopped. The water is clear as air. Polyp extension has returned. But I’m still on the edge of my seat and waiting for the next round of excitement! Ultimately, I’m still at a loss as to what could have caused this. Which, as a scientist, drives me nuts.

So what did we learn? No sudden vinegar additions in small tanks with low bioload. Don’t allow settled, undissolved kalkwasser in your top off reservoir. And, last but not least, UV sterilizers can be magical. Thanks for everyone who let me pick their brain on this issue. You know who you are and you all rock.