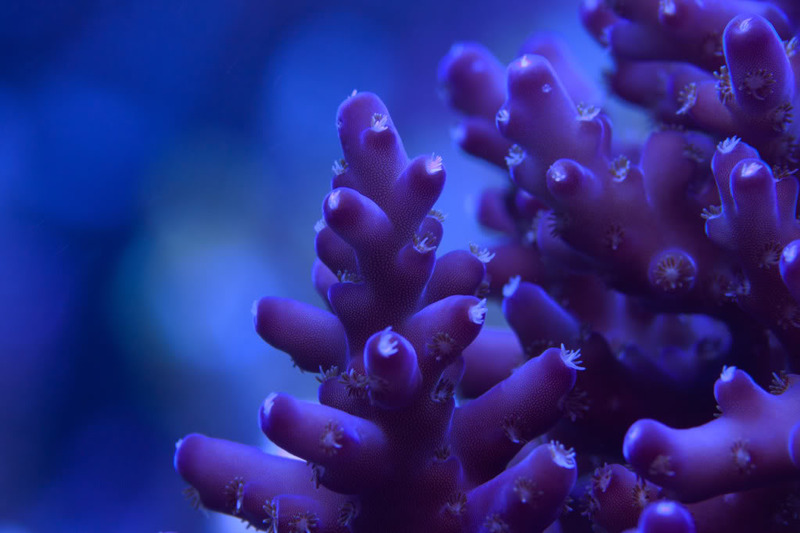 Today Steve Tyree shared with the Facebook world the origin of the Purple Monster, Tyree L.E. and coral names as we know it. I especially like hearing Steve’s take on coral names… direct from Steve! If you know me, naming corals has always been somewhat of a peeve of mine. But it is part of the hobby that’s here to stay, and it obviously helps identify a particular morph of a specific species. Without further ado, a little history lesson from Mr. Tyree:

And I mean the coral reefers, not the… well you know what. Thought I would do a little write up and explain how the Purple Monster coral came into the captive coral reef market. And also how the whole Limited Edition exotic naming of corals began. Saw someone was reading and commenting on my old Dynamic Ecomorphology Purple Monster page. That page has not even been updated in 10 years. Was taking care of 8 web sites for awhile and that number is down to just 5 now. So yeah, the old DE web site is still up there, but way out of date. Also the current Reeffarmers page is out of date. Will get to it when I get some time.

Back when the PM was imported, 1995 from the Solomon Islands, the keeping of Acropora within the US was just beginning. The very first Acropora colony sold in a store was in my reef tank at the time and had grown in captivity to about 2 feet x 1 3/4 feet x 1 1/2 feet in size. Acquired it around June 1992. So we were three years into keeping Acropora in the US. And yes most were not very colorful. We did experiment with the colorful Loripes from Fiji in 1993 and 1994 but were running into KH issues and the first KH crashes. So there was not a whole lot of color beyond brown and green.

Me and three other aquarists in the Laguna Hills area, decided to try to buy a box of Solomons Transhipped Acropora through Aquatic Depot. Getting in Acropora from anywhere but Indonesia was still rare. And the initial Fiji Loripes colonies were very colorful but proved difficult for the captive market at the time. You could not even buy a calcium reactor back then in the US. In fact I beta tested the second Calcium Reactor unit even made for distribution in the US (MKR-1). When I picked up that tranship order, the Aquatic Depot workers were very excited. They said it was the best box of corals they had ever seen. There were 4 very medium to large PM colonies in the box.

Only one of those colonies survived past the first week. The largest one of the box which I had placed in my tank. The colonies had been roughed up fairly bad in shipping. Eventually the Purple Monster began to show its first growth. I did not call it the Purple Monster (PM) and initially did not like the name. But it was what everyone else called it, so the name stuck. There was no way in the world I was going to frag the coral for anyone at the time. Fragging Acropora was still kind of unheard of and no one really had a clue how to do it properly with good success.

A few months later I got hooked up with a major coral importer and for awhile was the number one Acropora transhipper in the country. Stores were buying colonies direct from me. Then it all fell apart as things tend to do over time. The first coral disease hit the captive market called RTN. And this was a very virulent strain of RTN. At the time we figured we did not even have to worry about diseases, pests or predators. Heck we were just learning how to keep them alive and growing. The RTN problem was so bad that it was affecting the entire industry, which afterwards became a shell of itself for a year or two.

Unfortunately I could not tell people about the RTN problem publicly. Was actually threatened with a law suit if I ever spoke about the disease in public. This was around 1996. Dynamic Ecomorphology eventually failed and I thought the failure at the time was primarily due to the RTN problem. Little did I know at that time that a few of the industry insiders were telling everyone that RTN came from my facility only. It actually came from Fiji. So yes, my first company Dynamic Ecomorphology went down in flames because of those issues. Now that I look back at that whole fiasco, Dynamic Ecomorphology was more or less sacrificed for the hobby. Eventually Fiji worked out their issues and people began keeping Acropora again.

And eventually people figured out that my facility was not the only source of the problem, since people who had not bought through me also got RTN. I however was struggling badly due to the failure of DE. Hooked up with James Bond* who owned a LFS in Rancho Cucamonga. And he talked me into fragging the PM to raise money. The older established captive colonies had proven themselves healthy enough to fight off the RTN infection. Bond, James Bond* told me to sell frags for $50 each. Thought he was nuts. Who was going to pay $50 for an Acro frag ? At the time you could buy a small colony for $40 to $50 retail.

Eventually financial pressures and James Bond* convinced me to give it a go. Listed PM frags for $50 to my email list and people started buying them. James was right. So the whole Limited Edition craze began. And it was crazy back then. When I listed a new LE coral, my phone would ring non stop for 2 to 3 hours. People would get mad at me if they did not get a timely reservation. Very weird situation. But the good news was that a market for captive SPS coral frags existed and was born.

Over the years I have come to realize that what people wanted was a product they could grow themselves and sell with a good marketing name. It ended up being a consumer driven phenomenon. And just look at what the consumers have created today. Granted some of it is now out of hand, but its birth was not meant to be out of hand. And unfortunately as everything eventually falls apart over time, we had numerous other issues to deal with as time went by. Acro eating flatworms, Y2K, 911, Red Bugs, 2008 Economic crash and the latest problem, Acro eating sea spiders. Will post a write up about those, later in the week.

To sum it up in a nut shell, the Purple Monster was the first $50 a frag captive coral. And it made me think that captive grown was the best way to go. The image in this post shows the PM on the left and my main display reef a few months prior to the arrival of RTN. Might post some additional images to this thread later.

… And this comment from Steve below the above post literally had me laughing out loud, “And please note, I have never called my corals Tyree corals. Not once. Not ever. Everyone else did. You guys keep blaming me for things I did not do Lol.“

Thank you again for sharing Steve, and we look forward to more hobby history lessons.

*Names of people and stores were changed in Steve’s quote per his request. Steve did not actually team up with 007 to frag an Acropora loripes, although that would be epic.