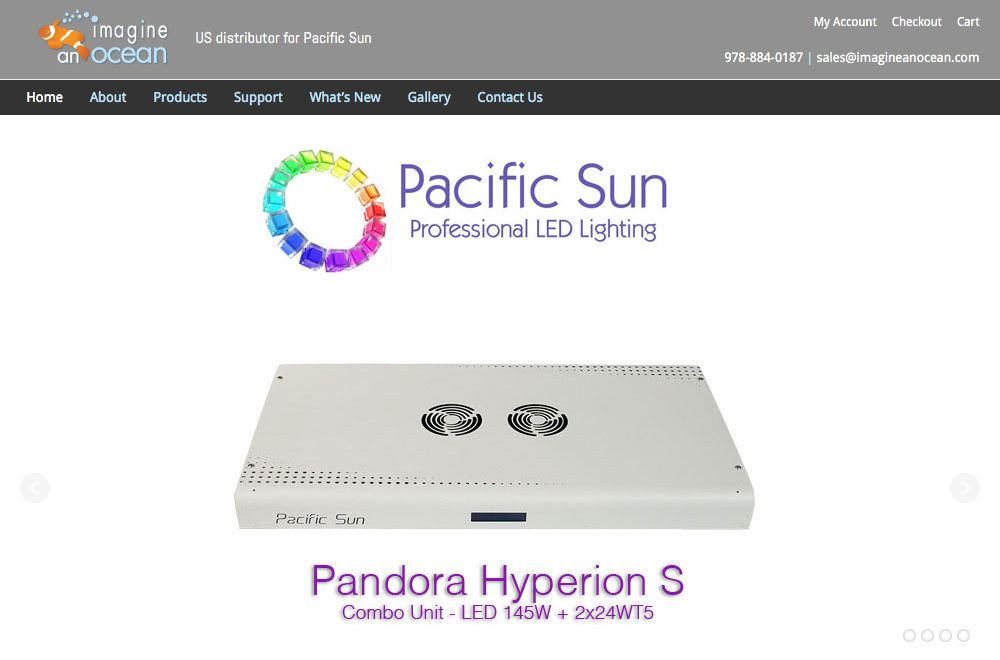 The crew at Pacific Sun have been working double time as of late and have several new things to discuss. Not only have they released several new fixtures which we talked about last month, but they also have a new software update for their 8 channel light fixtures like the Metis Hyperion R2 and Pandora Hyperion S and a brand new website for their US market through their distributor, Imagine An Ocean. Things are really moving and shaking over at Pacific Sun, and we’re gladly tagging along for the ride. The new US website for Pacific Sun, like we mentioned, is actually through their Imagine an Ocean distributor. That said, it’s loaded to the brim with nothing but Pacific Sun gear and it finally gives American hobbyists a centralized location to purchase their hardware. The site has a clean look, is easy to use, and helps hobbyists out by laying out product specs for each of their light fixtures. This website isn’t huge in terms of news, but it usually takes quite a bit of effort to get a site running that looks as nice and operates as smoothly as Pacific Sun’s new home, so we think it’s worth the mention. Refocusing back on the software update, the Pacific Sun 8ch ver. 9.4 software isn’t much different from previous releases, but it does have some key updates. Besides the visual refresh, which includes an icon overhaul and interactive graphs, the Hyperion Project software sports a couple of new tabs, including the Atmospheric Settings and Custom Scenario tabs. The other tabs remain unchanged for the most part, but the two new ones offer several nice features. the Atmospheric Settings tab, for example, simulates cloud coverage and seasonal simulations, while the Custom Scenario tab allows users to just get crazy with picking colors and intensities of the LEDs at different times of the day. The Daylight Settings tab just tells when the lights to start their sunrise and sunset modes, while also allowing for some color customization. The Colour Settings tab allows for indepedent control of each LED color channel, but the Custom Scenario allows users to run, modify, and even share customized programs that are tailored around the built-in BALI light program…which was designed to mimic daylight settings around popular spots in the Pacific-Indo region. We get that it’s all a bit confusing to read, and believe me when I say it’s difficult to communicate. So, we’ve included screen shots from all of the tabs so you can get an idea of the software’s layout.