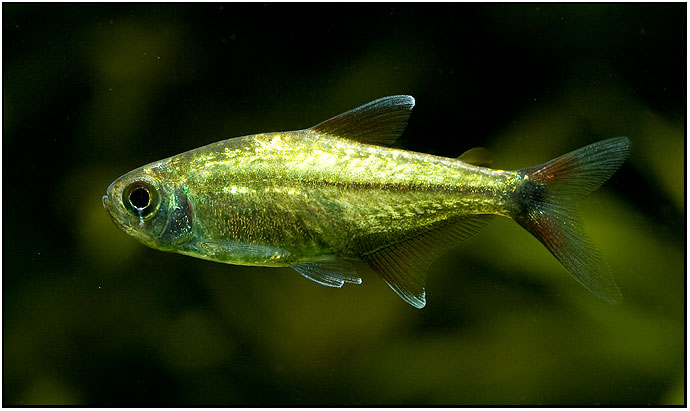 Any aquarist knows that there are a lot of really colorful fishes out there. But, some really stand out. One such species is the bronze tetra (Hemigrammus rodwayi). It is collected from floodplains and coastal waterways of the Amazon River Basin in Brazil and Peru as well as Rivers in Suriname, Guyana and French Guiana. This otherwise unremarkable little characin can develop a shiny, golden metallic (and we mean metallic) sheen that is not really matched in the fish world. Its beauty is multiplied by the number of individuals in a shoal.

Their golden glow is undoubtedly one main reason for the animal’s popularity in the ornamental fish trade. However, when fish farmers first sought to culture this potentially valuable species, it was discovered that captive raised specimens lacked the characteristic metallic luster of their wild counterparts. The usual culprits—diet, environmental conditions—were blamed. It took considerable investigation before it was determined that the bronze tetra’s coloration was actually derived from a much more unusual source.

Coloration in fishes is typically produced and controlled by specialized cells called chromatophores. The metallic hues exhibited in wild H. rodwayi, on the other hand, are quite different, being produced by a cutaneous reaction to a parasitic trematode. The golden shine can be linked to guanin, a substance that is secreted by the skin as a protection against trematode infestation. This fish appears to be more prone to disease than many other tetras (particularly to skin parasites). However, wild specimens, which (judging from the preponderance of gold “morphs”) usually show evidence of exposure to the parasite, tend not to be carriers and pose no general threat to their tankmates.

We recently reported on another example of novel fish coloration in the walleyed pike.

To learn more about the ecology and physiology of fish coloration, please check out this recent Reefs Magazine article: