I GOT THE BLUES
(M. Jagger/K. Richards)

As I stand by your flame
I get burned once again
Feelin’ low down, I’m blue

As I sit by the fire Of your warm desire I’ve got the blues for you, yeah

Immortal words from two guys who have ingested more chemicals than your aquarium.

What is it about the blues that captures the imaginations, thoughts and wallets of us all?

As a typical American male, when doing self exploration, examining who I am as a person and how the world came to be, I opt to find a good scapegoat for my troubles so I can blame them mercilessly for the ills of humanity.  Last episode I picked on two guys who have been dead for 50 years and two other dudes who were certainly not thinking about the price of corals when they created one of the most popular pieces of software of all time.  For this particular column, I’ll try to concentrate on “science”, but it wouldn’t be fair to not give you some sort of totem figure to blame for the collective financial burdens of our hobby. 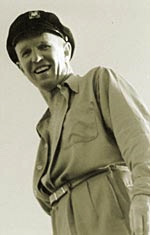 Robert Switzer
Robert is less well known than popular compounds like LSD, MDMA and the family of hallucinogens, but he has done his share of damage to our retinas.  You see, Robert inadvertently stumbled into a whole new range of natural pigments know as organic fluorescents which you and I know as Day-Glo.  Impressive in their own right, Day-Glo paint proved to be incredible spectacular under ultraviolet lights operating in the range of 365nm. 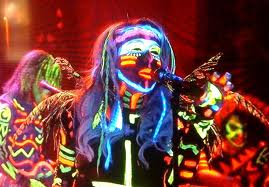 The combination of this lighting with Robert’s paints caused an amazing metamorphosis in the state of dorm rooms across college campuses around the world.  Gone were the Ansel Adams and Hemmingway posters, the new “cool” was a black room, lit only by a “black light”.

You know the concept.  You paint the walls bright white or black, put up a Dark Side of the Moon poster and one of these trippy posters and you’ve got instant college dropout cred.

A new type of art appreciation was born, and the fundamental principle was “How badly can I make your eyes strain?”

An entire culture was born from these colors, lighting and narcotics, Rave culture.  For those that don’t know about it, Rave culture is responsible for all of those kids with dilated pupils, pacifiers, lightsticks and alien-like clothing dancing until they pass out from dehydration.  Go to any rave and this is what you will see: 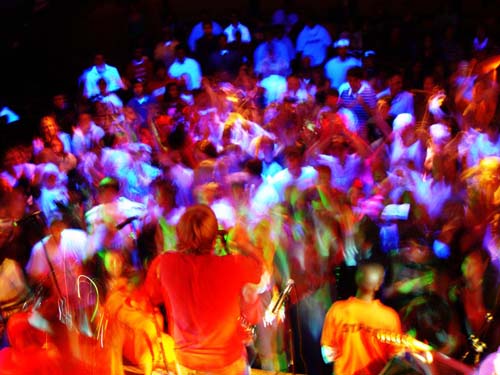 Inevitably, when we first see a reef tank, we are taken with the amount of light and “shimmer” of the lights in the moving water.  We think about building a tank and are immediately confronted with a choice of lighting.  We generally opt for something that is sufficient for keeping our photosynthetic friends (technically the bacteria within the coral).  We join a reef club, find some friends and visit some tanks in our area.  Why doesn’t our tank look like all the others?  How are they getting the colors to “POP” like that?  We seek quick fixes for our aquarium challenges with fancy lights that promise to bring out all of the colors that we cannot see in regular light.  This seems to be the trend that has started to take a hold of the hobby and has driven the Limited Edition coral craze.  There are many more corals that are much more limited than fancy zoanthids or chalices.  For example, I have a brown moseleya that is incredibly rare, I don’t know one other person who owns anything like it.  Unfortunately for me, and the coral, the lack of phosphorescent pigments make this rare coral totally boring and unlikely to generate much interest.  So much for natural selection. The inherent problem in collecting and displaying corals that have fluorescent properties, is that in order to see them, we generally have to “excite” the pigments by hitting them with a large level of purple or blue light.  That poses a problem for people who actually want to see their corals grow.  Corals seem to grow best under light that mirrors the color of light produced by the sun (and then effectively shifted by the refraction of the water above them in the ocean).  Despite the efforts of frag vendors to convince us, the sun is not actually a black light.  While we do get a good amount of UV in our daily sunlight, we are lucky that the ozone layer protects us from the dangerous properties of unshielded UV lighting.

So what is the problem in all of this?  Corals sell better when bathed in blue light.  Unnatural as it is, blue lights on corals make us feel like we are in our dorm rooms, at a rave, a cool party, a Pink Floyd concert, or under the influence of a variety of psychedelic drugs.  Would our corals look better if we looked at our tank after having eaten a pile of psilocybin mushrooms?  SURE!  Actually, now that you mention it, are we really that far away from online LE coral sellers offering WYSIWYG* frag packs? 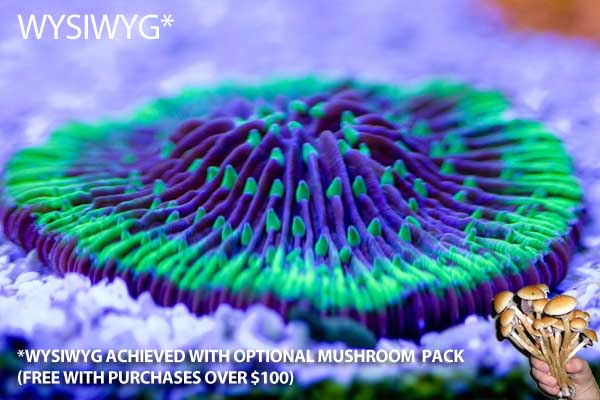 Lighting makes a really big deal when selling corals, but not because they need it to live. What else requires light trickery to seal a deal?  UGLY PEOPLE.  Bars have been doing it forever!  Go to your neighborhood bar on Thursday night and in just a short time you’ll see why natural selection has been beaten by a dimmer switch and mixed drinks.

So, how did you feel when you woke up the next morning? 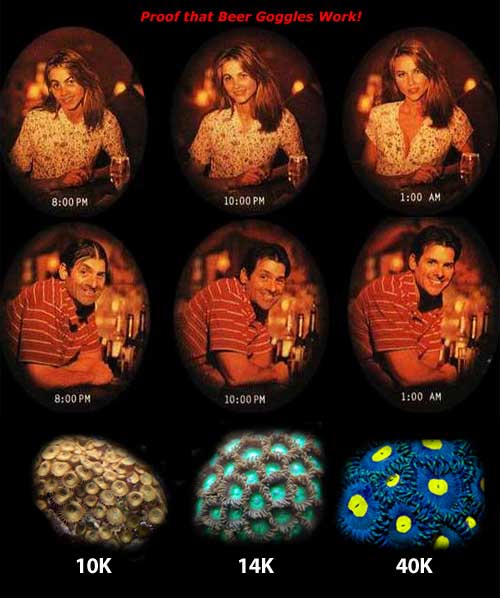 Next time: The Marilyn Monroe of Corals