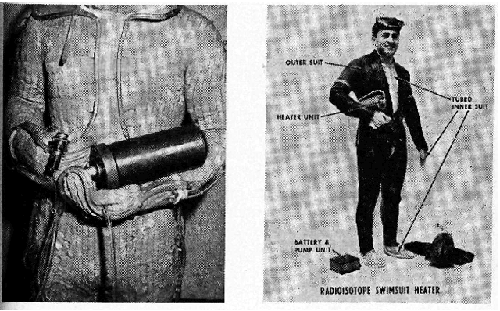 From Annual Report to Congress of the AEC for 1967. US Government via Atomic Skies

There was a time, in the U.S.’s not-too-distant past, that nuclear power wasn’t as contentious a subject as it is now, and our country’s top researchers and scientists were on the look out for new and interesting ways to use the radioactive isotopes discovered through nuclear research. The most fascinating invention? A nuclear-powered diving suit!

Throughout the 1940’s, nuclear research and weapon production took place at over 30 sites throughout the United States, the U.K., and Canada, and later, as the need for weapons abated after the war, scientists were tasked with finding alternative uses for the powerful materials in their possession. Highly radioactive isotopes of uranium and plutonium were of particular interest, and Plutonium-238 was studied as a way to provide supplemental heat to scuba divers.

From US Patent No. 3,402,708. US Government, modified by Atomic Skies for clarity via Atomic Skies

Plutonium 238 is a slightly more benign isotope (it’s not weapons-grade), and only emits alpha particles – they have trouble passing through a sheet of paper, but they do get very hot and can be used as a heat-to-power source in the form of Radioisotope Thermoelectric Generators. RTGs have been used for decades now to power spacecraft, including several current Mars rovers and the Voyager spacecraft.

But 60 years ago, scientists considered using RTGs to heat water that would be circulated through a diving suit without any batteries or re-charging (sounds great). From what I can find online, the project was abandoned before it reached completion, perhaps due to a lack of available plutonium, but what an idea!

I travel the world scuba diving, and I spend a huge amount of time at airports explaining my curious looking camera kit – can you imagine arriving at LAX with a plutonium-powered dive suit?

For more information, I recommend this article.