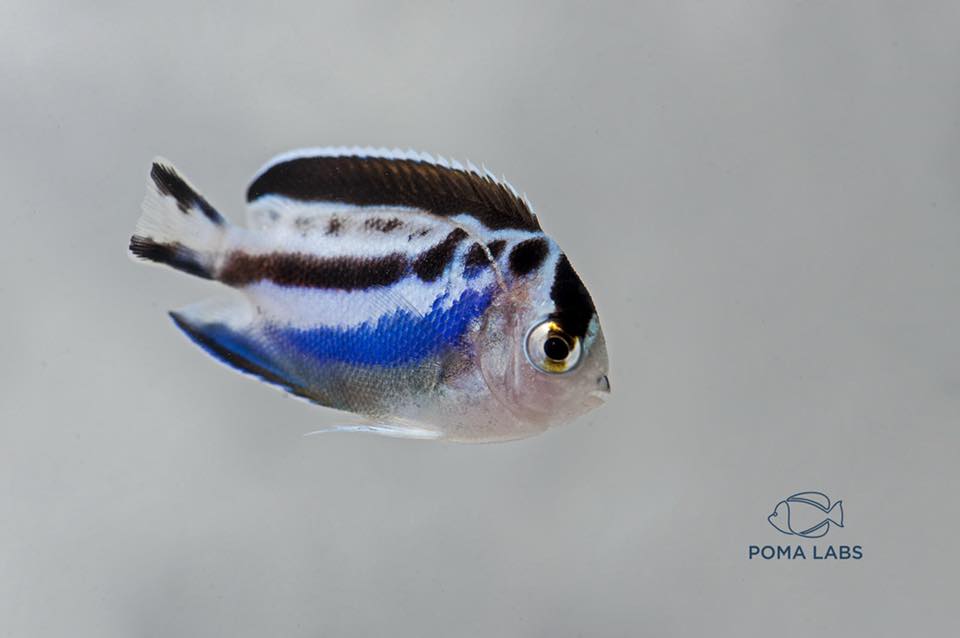 In another success story from our friends at Poma Labs, the captive bred and reared Bellus Angelfish Genicanthus bellus has become a reality. It’s a true milestone achievement and more proof that captive breeding of marine fish is the future of our reef hobby.
Genicanthus is my favorite genus of marine angelfishes and one of the most beautiful group of reef fishes in general. Amongst them, Bellus angelfish is one gorgeous looking fish that also happens to be a perfect addition to any reef tank. These angels do not grow large, are not aggressive to other fish and most of all, are completely reef safe.

In contrast to most marine angelfish, corals are not part of Genicanthus’ diet. Instead, they are planktivores, consuming mainly zooplankton, fish eggs, and pelagic (free swimming) tunicates in the water column, with some marine algae mixed in their diet.
In the wild, most Genicanthus species can be found on rocky outcrops and reef bottoms at depths ranging from 70 feet to well over 400 feet. The deepest ever recorded specimen, a G. semifasciatus, occupied a rocky bottom at 650 feet deep! In the wild, Genicanthus angels do not form harems or large schools, but live in large groupings of individual fish forming a hierarchy, where the largest males dominate the smaller ones and breed with a larger number of females. While territorial in their nature, Genicanthus males rarely fight with other males, and females within groupings tolerate each other just as well.
One signature characteristic of the genus in general, and equally displayed in the Genicanthus species, is sexual dimorphism, meaning the appearance of the males and females is readily discernible. Here, the difference between males and females of the same species is striking, with females usually being the more colorful and vibrant of the two sexes.
It’s also worth noting that all Genicanthus species are protogynous hermaphrodites- they all are born females (hence the Poma Labs – provided picture of the young fish all having female appearance) and are able to transform to sexually reproductive males (and retract back to females for that matter) at any stage in their life. Although a rare occurrence, they may do so even in captivity, especially in the presence of other females of the same species or other fish in the genus. 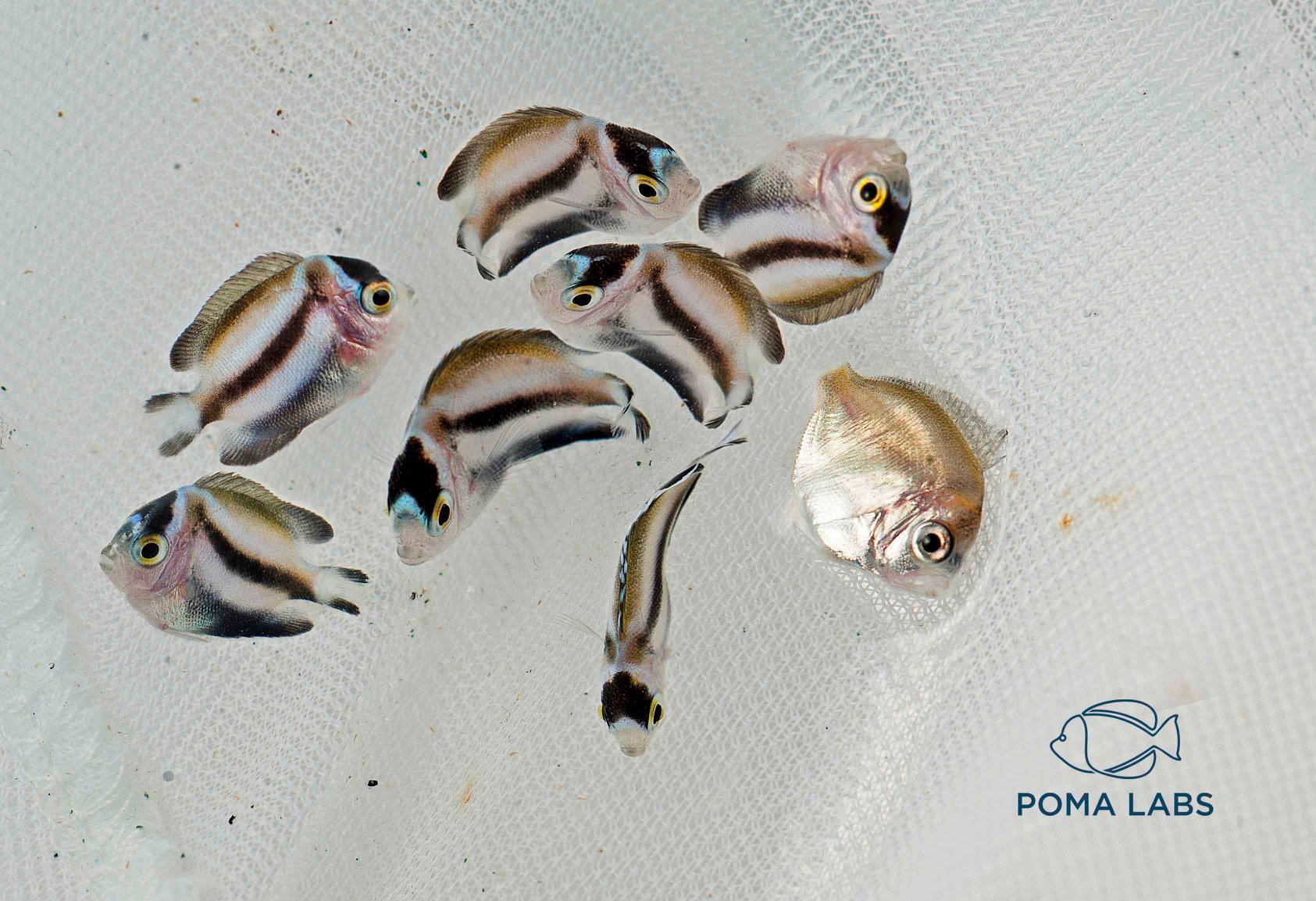 Genicanthus bellus’ range includes the western Pacific and eastern Indian Oceans, but specimens have been also collected in Tonga and Philippines. They reach a maximum adulthood size of around 7”, and males are usually slightly larger than females. In aquarium settings, they grow rather quickly and are active swimmers, therefore an aquarium of 75 gallons should be the minimum size tank for a single fish, more if you plan for a pair of these beautiful angels. They easily adapt to aquarium conditions and should be fed a variety of foods, including frozen mysis, flakes, pellets, and sun dried Nori algae.

Poma Labs captive bred Bellus Angelfish come with a 30 day guarantee and Certificate of Identity. They sell so fast that they rarely hit the Poma webstore, therefore keep your eye out if you want to purchase one. Also, if you are attending Reef A Palooza in Orlando this weekend, make sure to stop at Poma Labs booth, where a few Bellus Angels are on display. 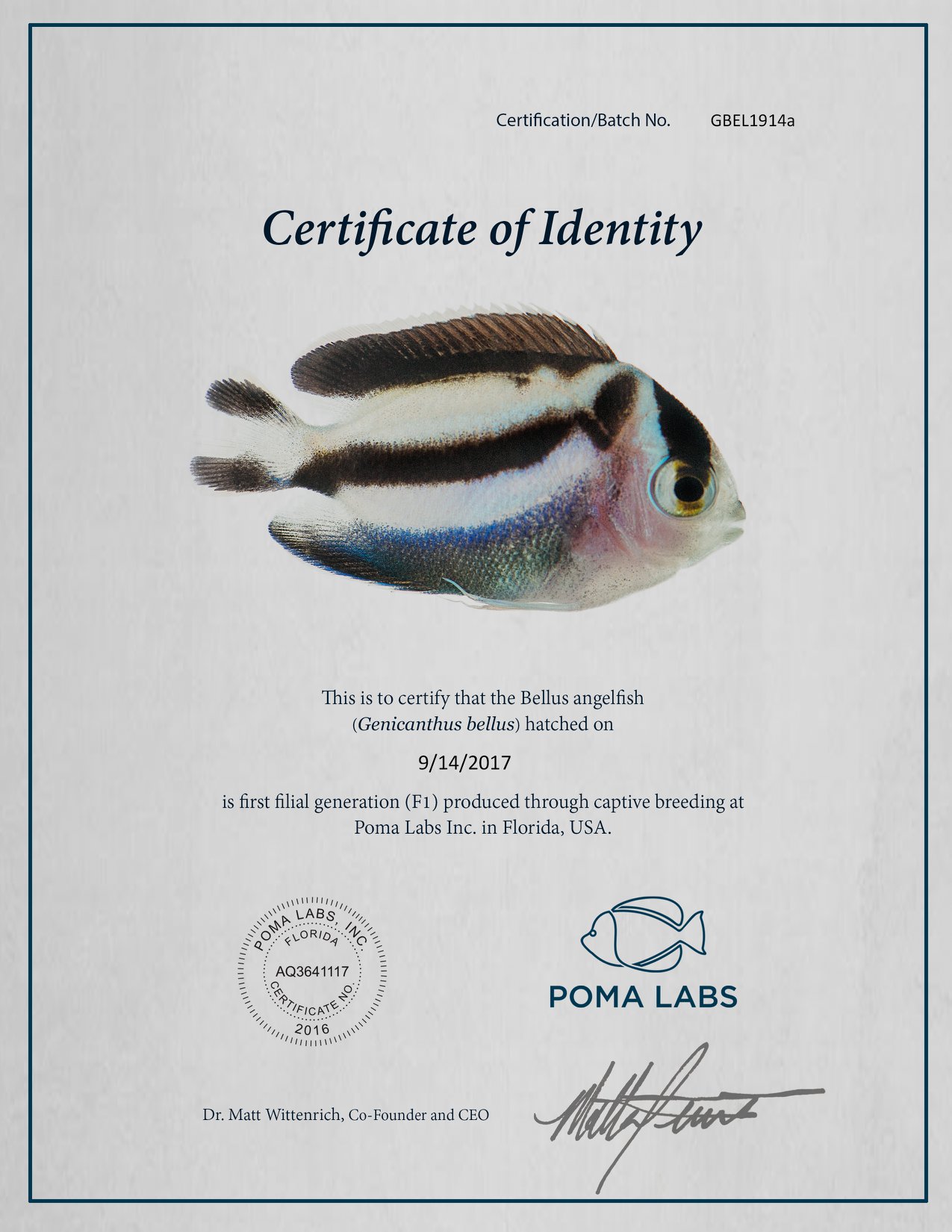 Congratulations to Poma Labs for bringing us this iconic fish and good luck in breeding more Genicanthus species in the future!
Visit http://pomalabs.com/  to learn more about current captive bred fish offerings.