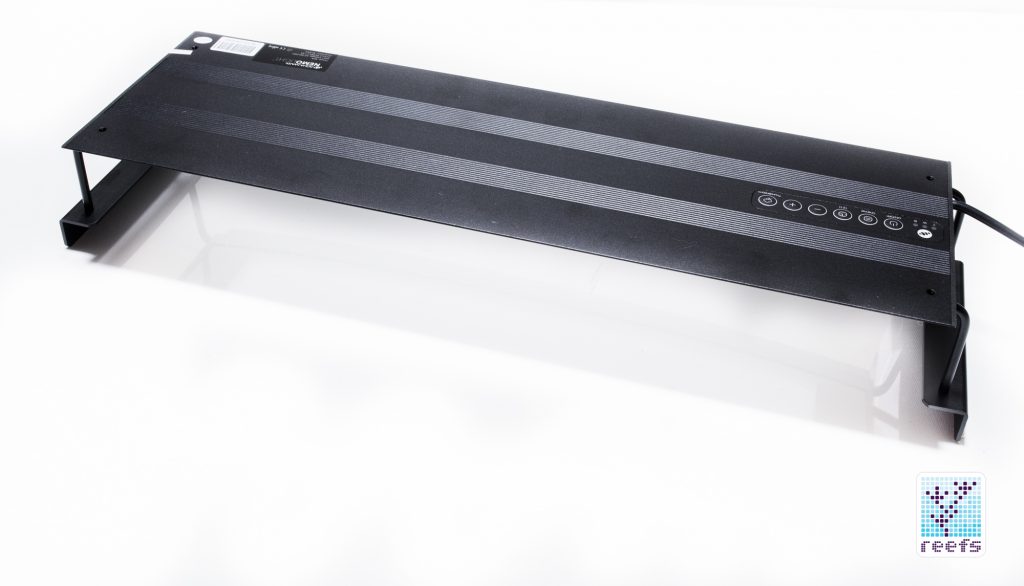 All photographs by author
Every year, dozens of new LED panels are introduced to the aquarium markets, many of which never reach the American soil. Especially saturated is the “budget” LED lights segment; I’ve reviewed many such lights over the years and they all seem to follow the same formula- plastic body, minimal control, inexpensive LED chips, and lack of  real power for keeping photosynthetic animals alive. Aquamaxx promises to change that formula with their new line of budget-oriented LED lights called NemoLight.

Aquamaxx is known for their line of protein skimmers (HOB-1 was an excellent product!), chemical media, and calcium reactors; while NemoLight is their first attempt in the budget oriented LED lighting. The light has some unique features that differentiate it from others in the same price category. Those are:

-aluminum body
-very low profile with passive (no fans) cooling
-LED emitters (of the low power/low wattage SMD variety) in 4 colors: 8000K white, 460nm Blue, 630nm Red, 520nm Green, grouped in two channels (white, red and green in one, blue in the second channel)
-built in controller featuring a timer, automatic dimming, sunrise/sunset program and weather effects
-each fixture comes with an adjustable bracket that can be affixed to the tank’s rim; an optional hanging kit is also available
-maximum power draw with all diodes on 100% intensity- 36W (for the 24″-36″ model) 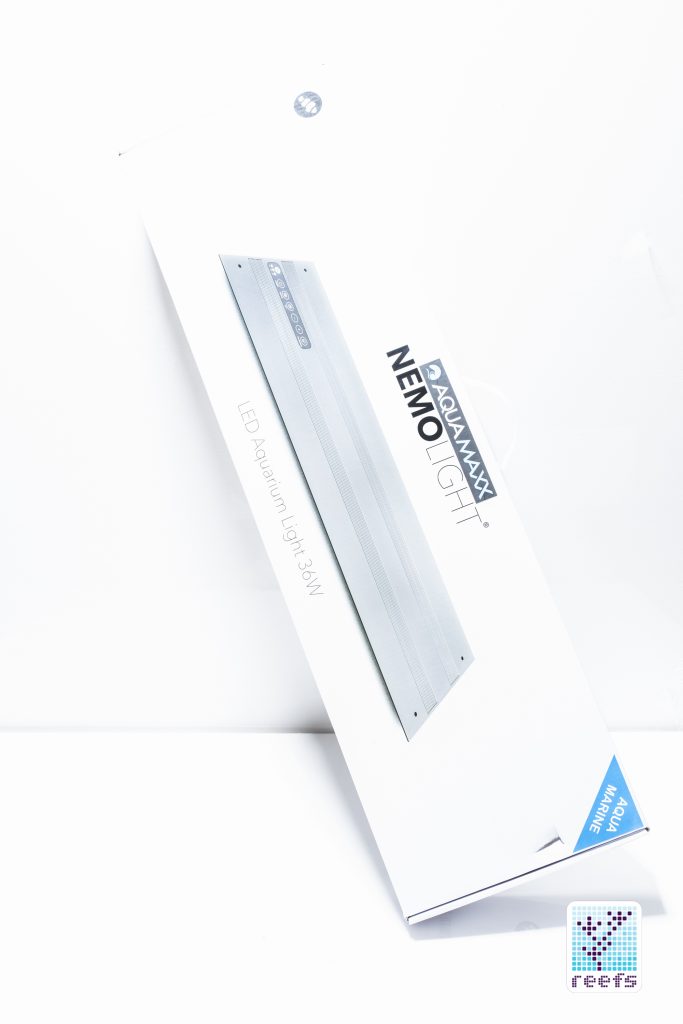 I received a 36W version of the Aquamaxx NemoLight LED from marinedepot.com that is designed for aquariums 24″-36″ in length. The unit sits in a very sturdy and good-looking retail box. 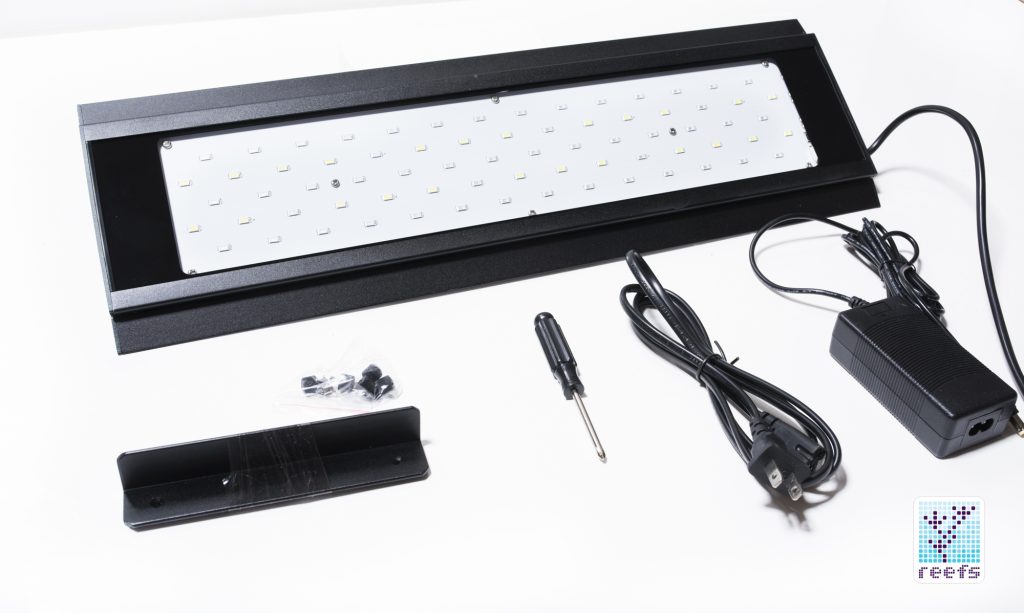 -the light, complete with retractable mounting brackets
-a 24V power adapter with 12′ long cable (checked)
-a small screwdriver and set of screws (two extra if you lose any) to mount the leg brackets
-operation manual 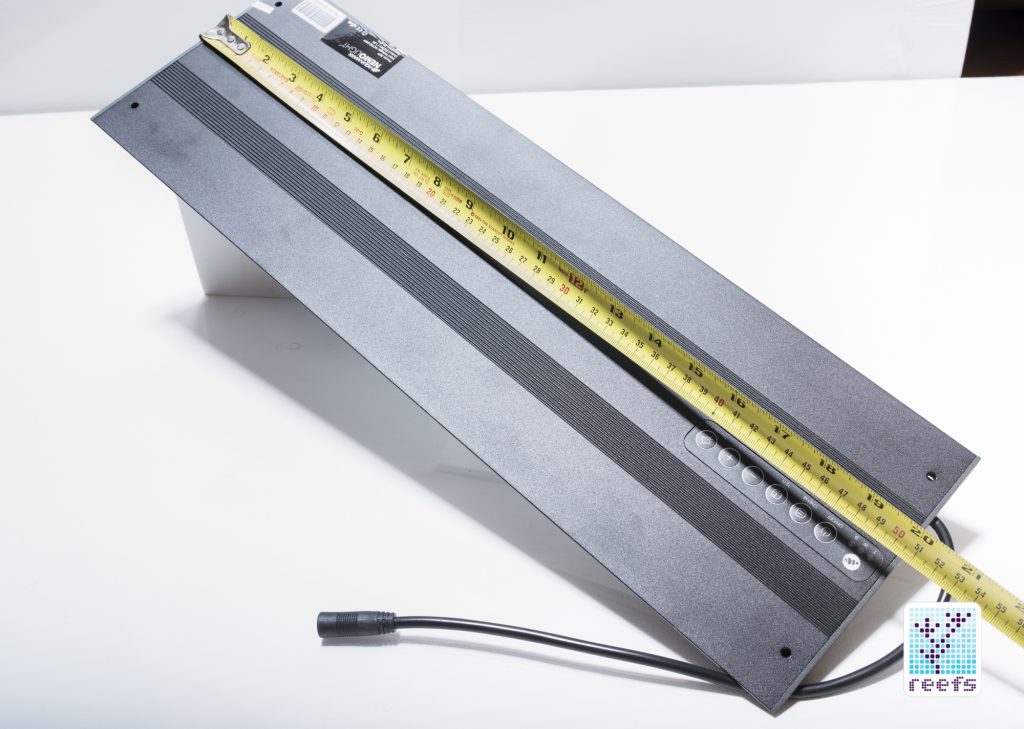 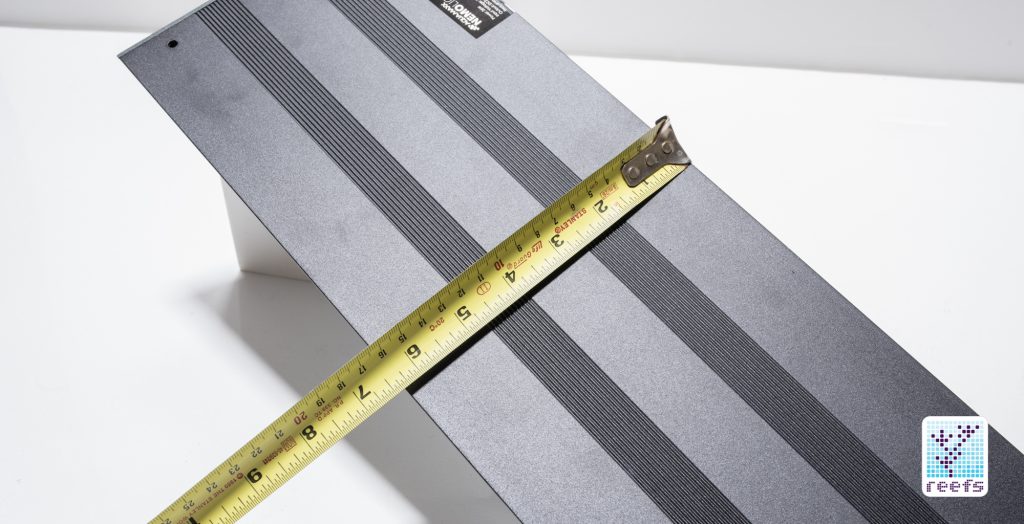 The first thing I noticed about the NemoLight for the first time is its build quality- the entire body is made out of aluminum (which doubles as a heat sink), something you don’t see in aquarium lighting in this price category. It feels and looks great, and is extremely compact. 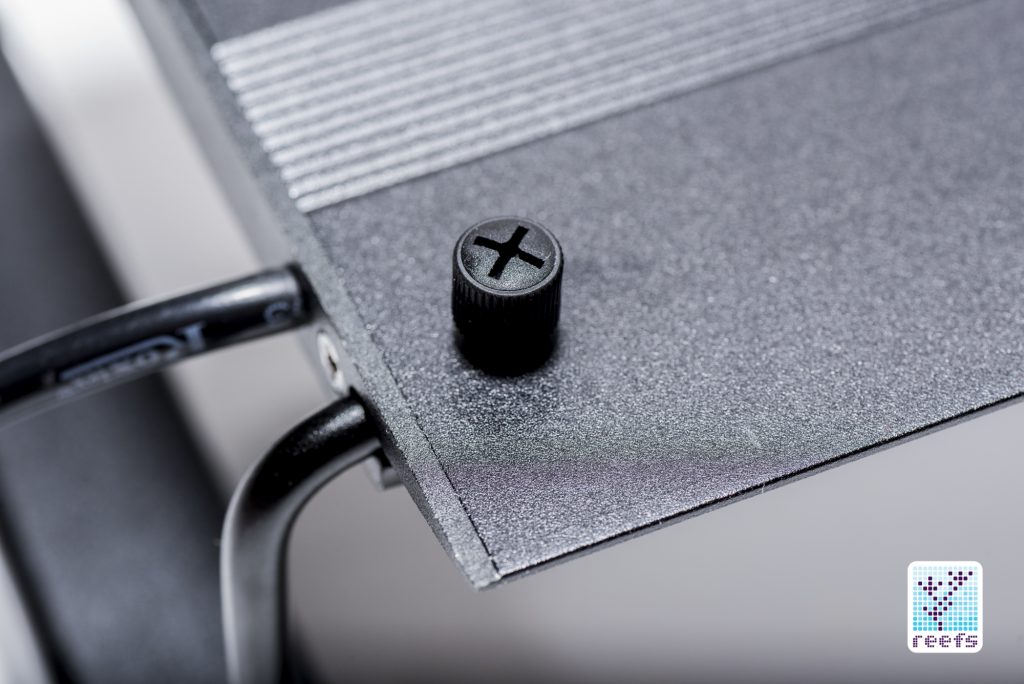 The elegant, flush-mounted controller sits on top of the unit, and features three indicator diodes and a row of six buttons that control the functions. There is a single, 12-foot power cable powering the unit and two holes on each end of the light for thumb screws (included) that tighten brackets to the light’s body. The LEDs – 24 white, 42 blue, 4 red, and 2 green (for a total of 72 LEDs) sit behind an acrylic splash cover. 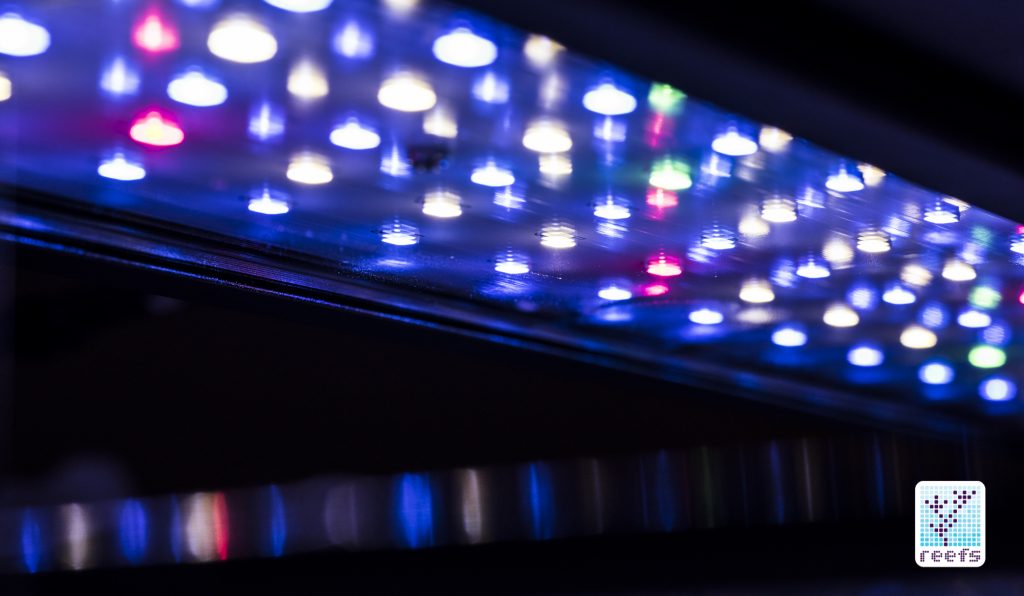 They are surface-mounted, 0.5 W emitters and, in turn, have advantages and disadvantages. On the plus side, SMD LEDs are small,do not transfer much heat into the water column, can be cooled passively (without the use of fans), and have a potential to be very bright. 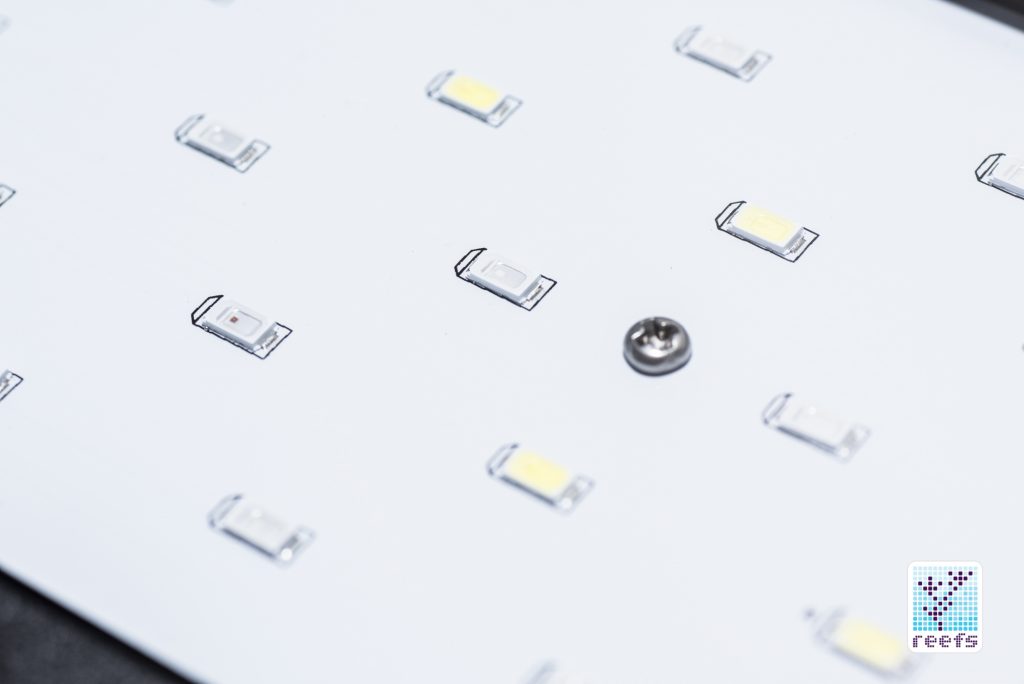 On the downside, since they lack secondary options, they offer a wide spread of light but poor penetration and cannot produce PAR numbers equivalent to the high-powered LED emitters seen in more-expensive aquarium fixtures. 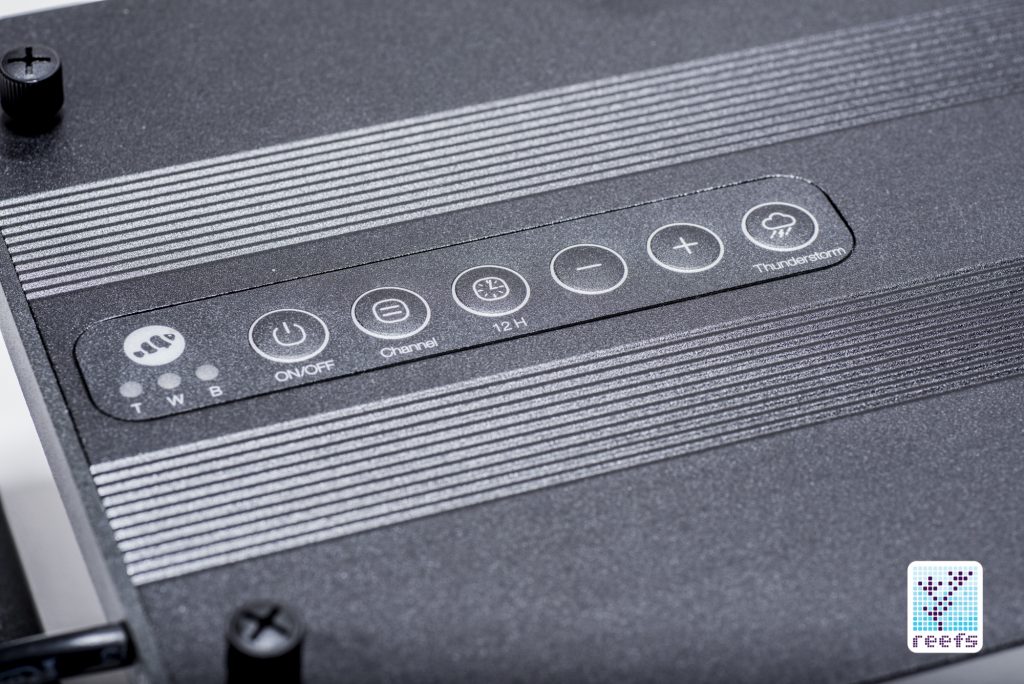 NemoLight’s integrated controller does not have a display, but its manual explains all functions quite clearly. First, three indicator lights inform users of the selected channel (white or actinic) and if the light is in timer mode. To the right of the lights are 6 physical buttons; the first one in the row turns the light ON/OFF, the second changes channels, the next two buttons, labeled “+” and “-“, are used to adjust intensity or time (when timer mode is selected).

Dimming the light’s intensity is a simple task- press a channel button to switch between white & blue and use  “+” & “-“ buttons to change light output; each press changes the intensity by 5% on the scale between 5%-100%. You can control each channel independently, but the light does not remember its programming when you cut power to it (it will if you turn it off with its own ON/OFF button), which limits the use of secondary timer devices. 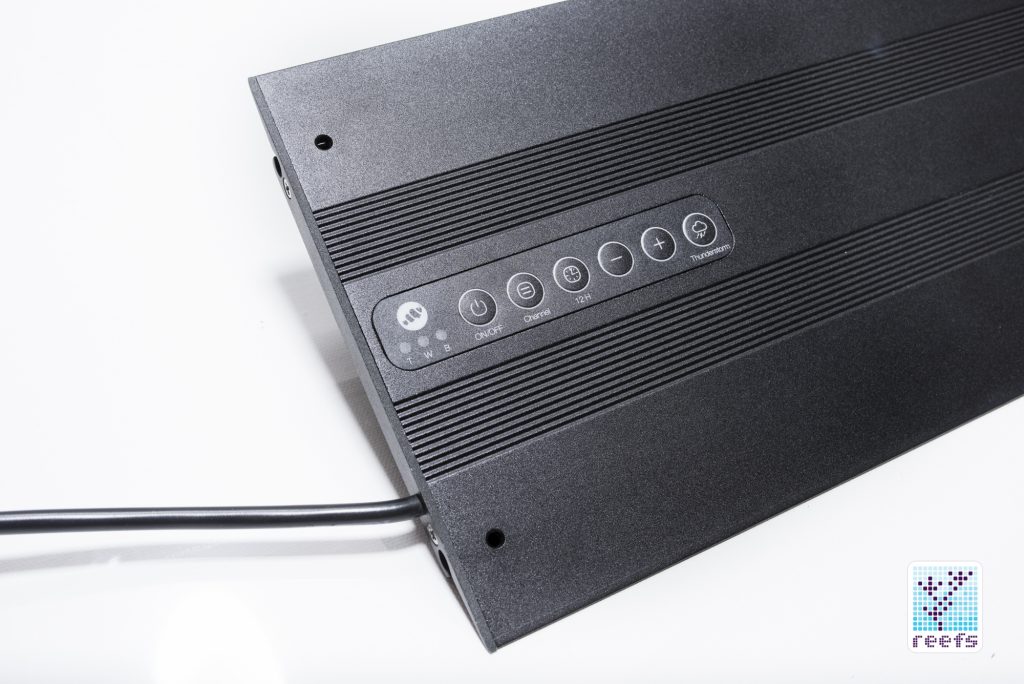 The timer mode allows for a 24-hour cycle of light automation. By pressing it once, the light enters daylight mode for 12h and moonlight (blue channel only) 12h. You can change the daylight/moonlight duration and intensity for each channel while in timer mode. The only inconvenience is NemoLight’s lack of display- you have to set the timer exactly at the time you would like it to enter/switch between modes. It means that, for example, if you need your photoperiod to start at 2pm and last for 8 hours, you need to physically set the timer at 2pm on the day you program the light. It’s a little troublesome, but I guess Aquamaxx had to ditch the screen to keep the costs down.

The last two NemoLight features are the sunset/sunrise mode and the thunderstorm effect. The former is a simple dimmer that you can set to simulate sunrise and sunset, while the later offers a one-time (you cannot program it to your schedule) stroboscope effect that last few seconds and will impress your non-reefing friends. 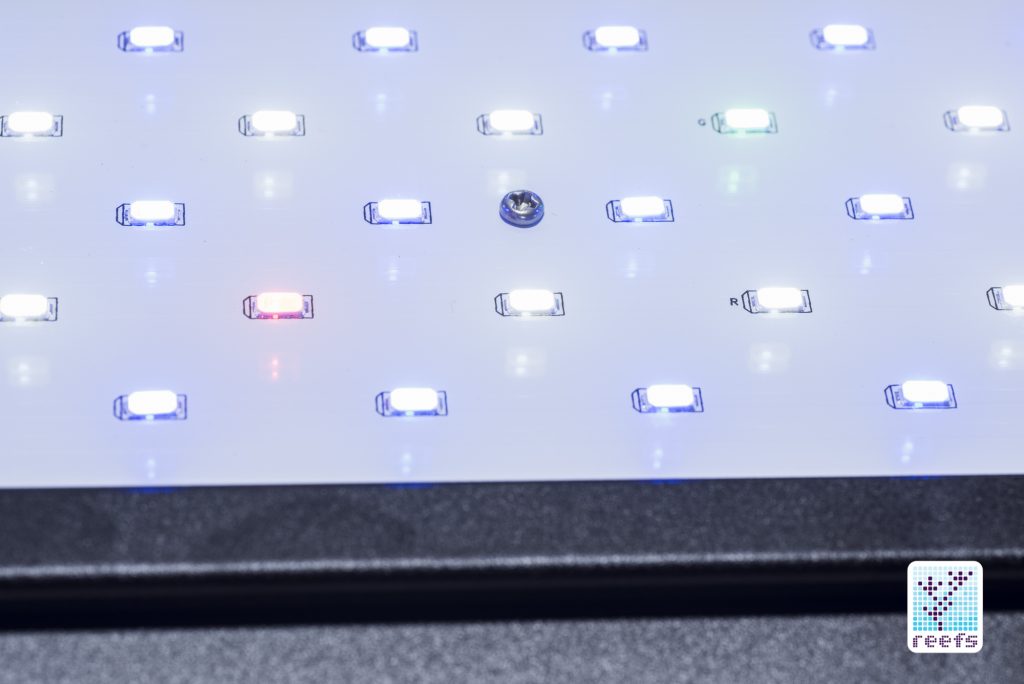 I rested the light on the rim of my 20” cube (with some tweaking of its brackets- the light isn’t meant to be rested on aquariums shorter than 24″, but I argue you can actually use it on 22″ without any issues) to check the coverage and light penetration. The brackets raise the LED panel by 2″ when rested on the tank’s rim. As I mentioned before, SMD (surface mounted diode) LEDs usually have a good spread but a weak penetration. To my surprise, NemoLight has both. I don’t know how the manufacturer managed to squeeze so much light out of these emitters, but it is really bright, and light fall-off only starts at around 26″ in the horizontal direction, 20″ front to back, and around 18″ deep into the water column. These numbers would obviously change if you hang the light (you would loose penetration but gain spread). Here are pictures of my tank lit only by the NemoLight (white balance was adjusted to the aquarium surrounds). 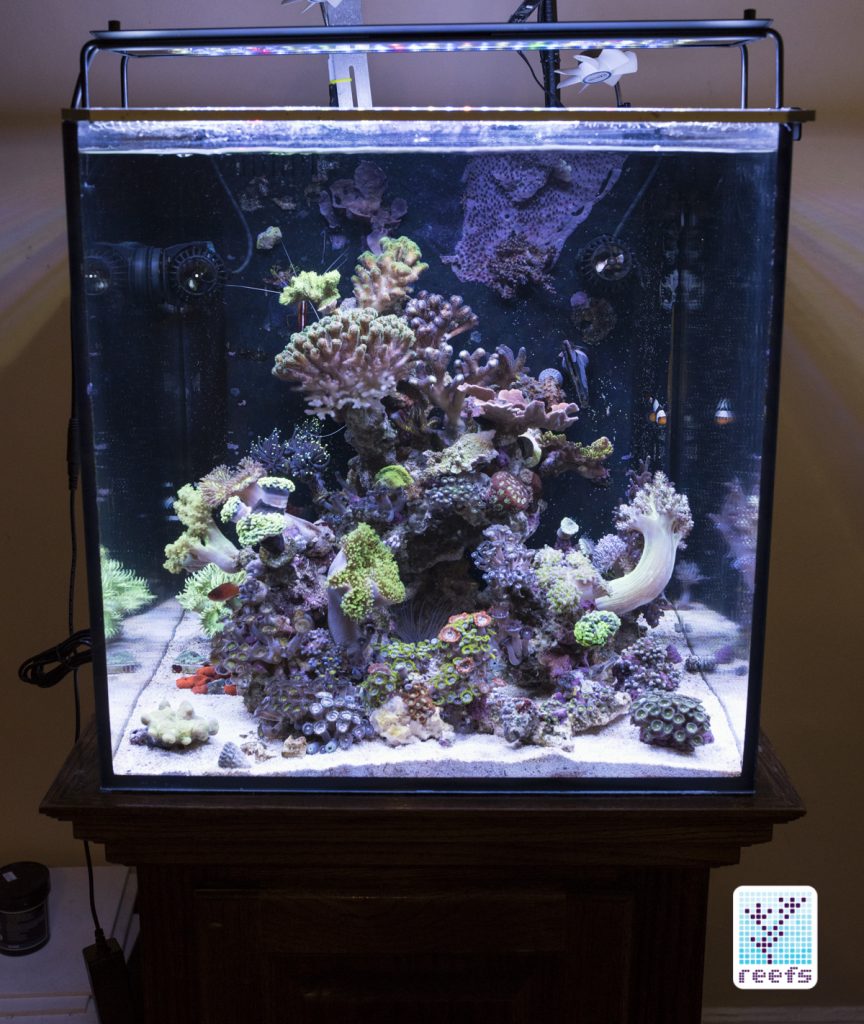 I didn’t expect NemoLight to be effective in growing high-light-demanding SPS corals, but I’ve found that SMD LEDs can successfully support a mixed reef with some less demanding hard corals placed closer to the light source. 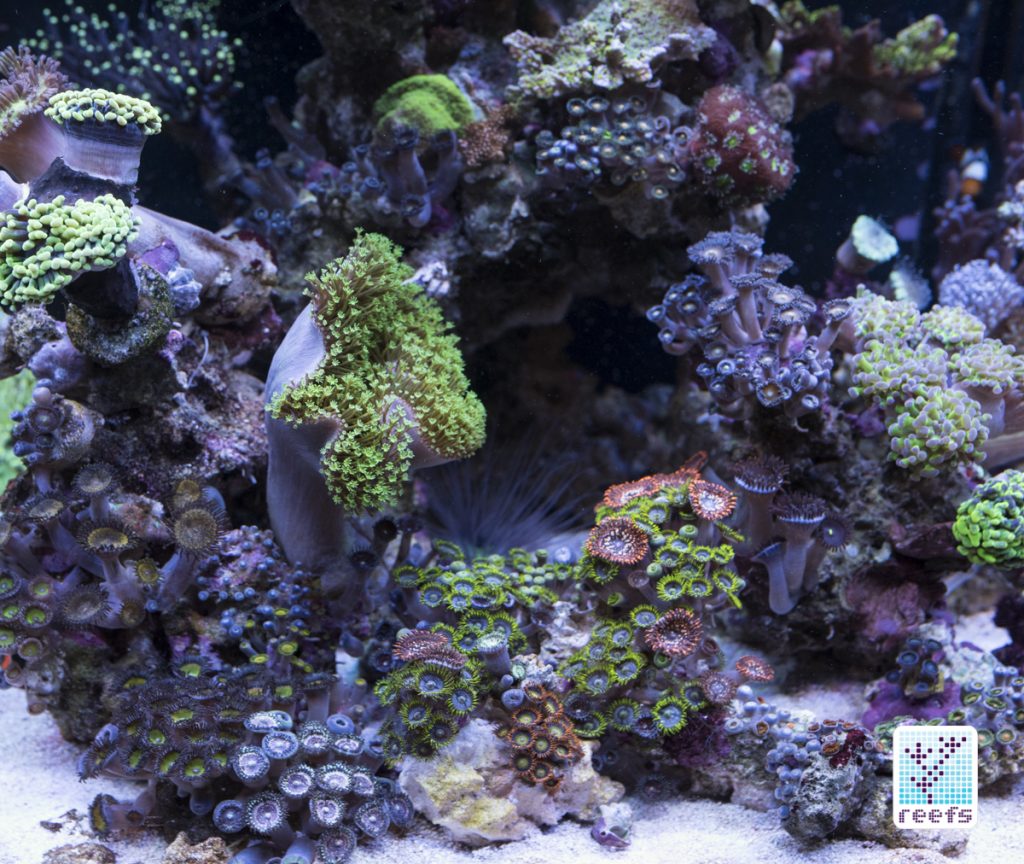 NemoLight is among the brightest SMD LED lights I’ve reviewed so far, both on the white and actinic-only channels. Here are some pictures of the blue channel: 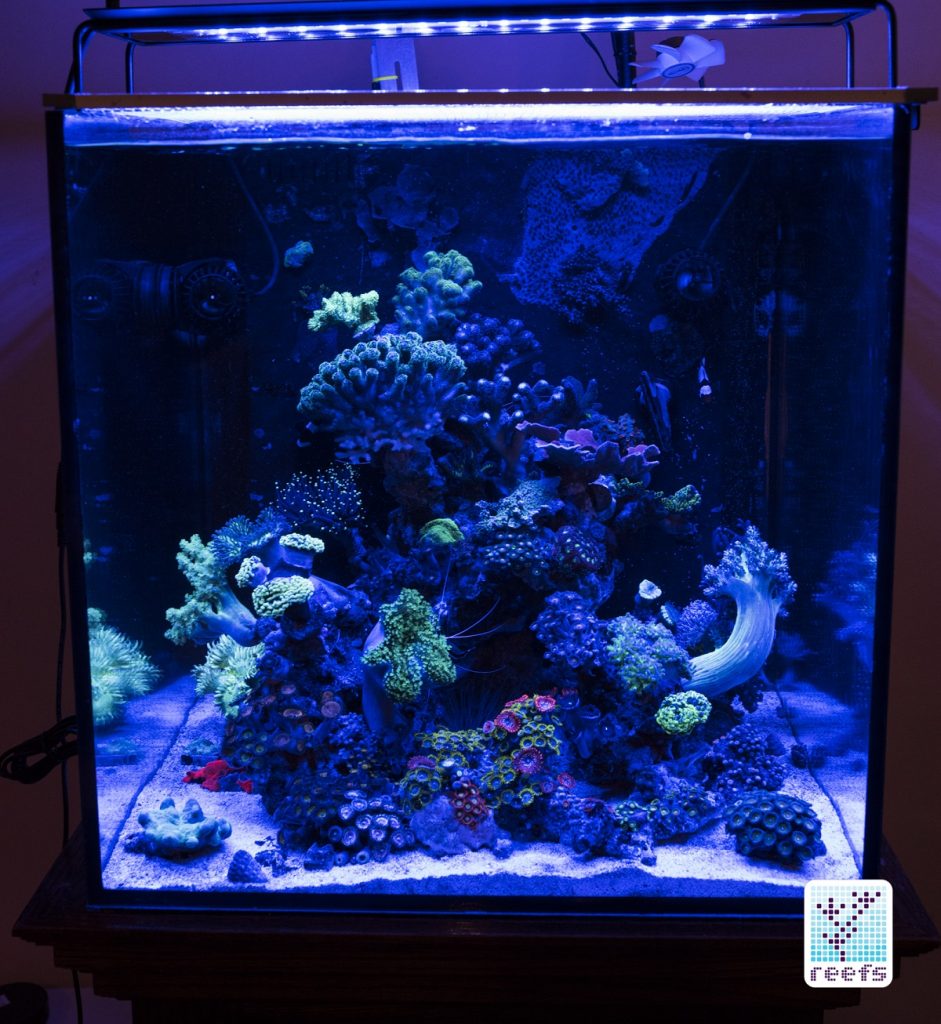 The light stayed warm to the touch after 2 hours of operation, which didn’t surprise me, knowing the entire aluminum case acts as a heatsink to the LED cluster. 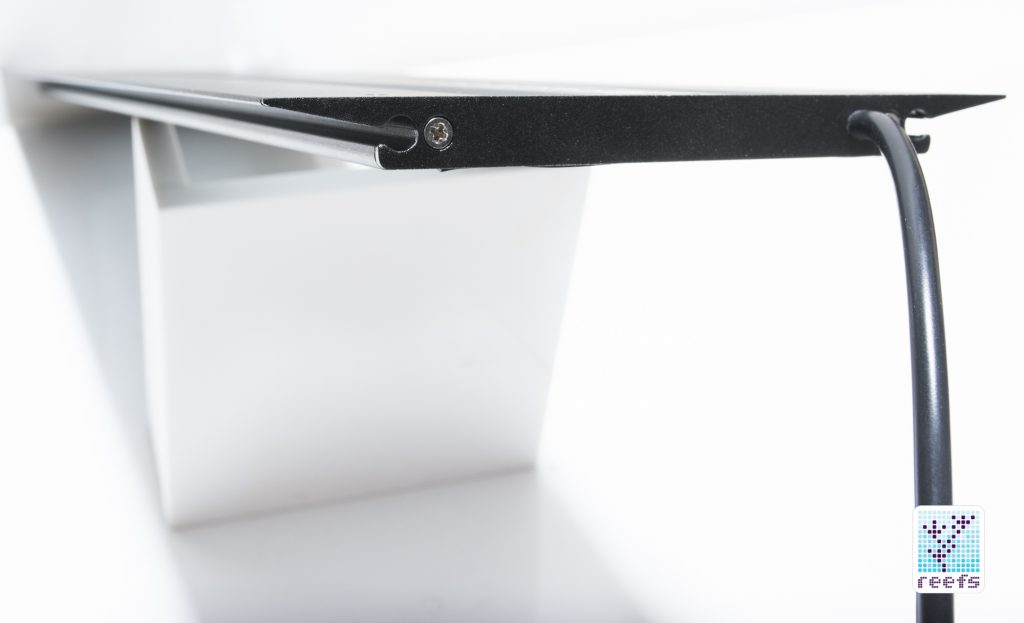 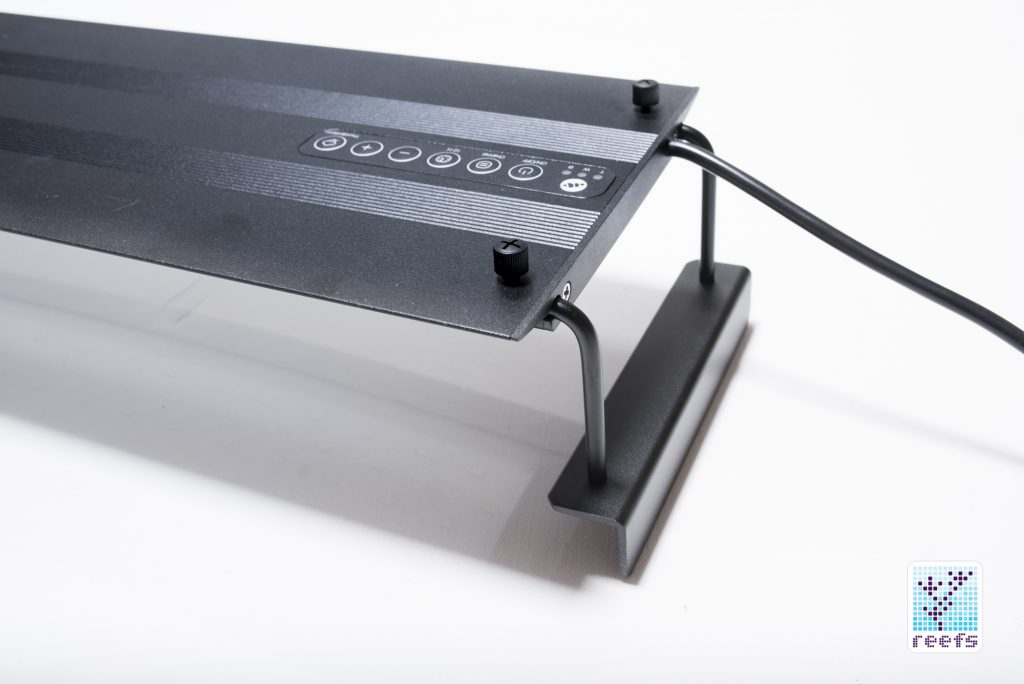 Aquamaxx NemoLight Aquamarine is a strong contender in the budget LED light market. It features an all-aluminum body, a compact, sleek appearance, an integrated timer and dimming features, and gives some impressive coverage and light penetration. It is priced within the range of similar devices and comes in four different models for different sizes of tanks. The only two things I would like to see improved is the ability to program the light at any time (perhaps by adding a small LCD screen) and inserting a small memory chip, so that the light can remember its settings when the power is cut.