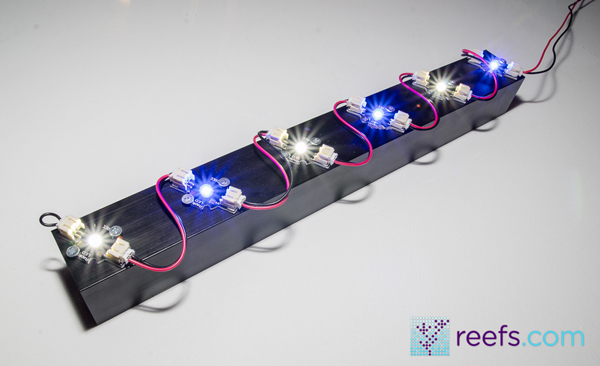 Despite the falling prices of new LED lights coming out, DIY approach is still the most cost-effective solution along with the highest level of custom-ability and an unmeasurable amount of fun and pride of building something yourself. In one of my previous reviews I wrote about Rapid LED solderless kit (check it here LINK), an interesting solution for people who are eager to go the DIY route but don’t want to hassle with the soldering part of it. Recently, staff at RapidLED made few changes to their solderless kits and I received the redesigned package for review. Let’s see what’s new in this DIY kit… 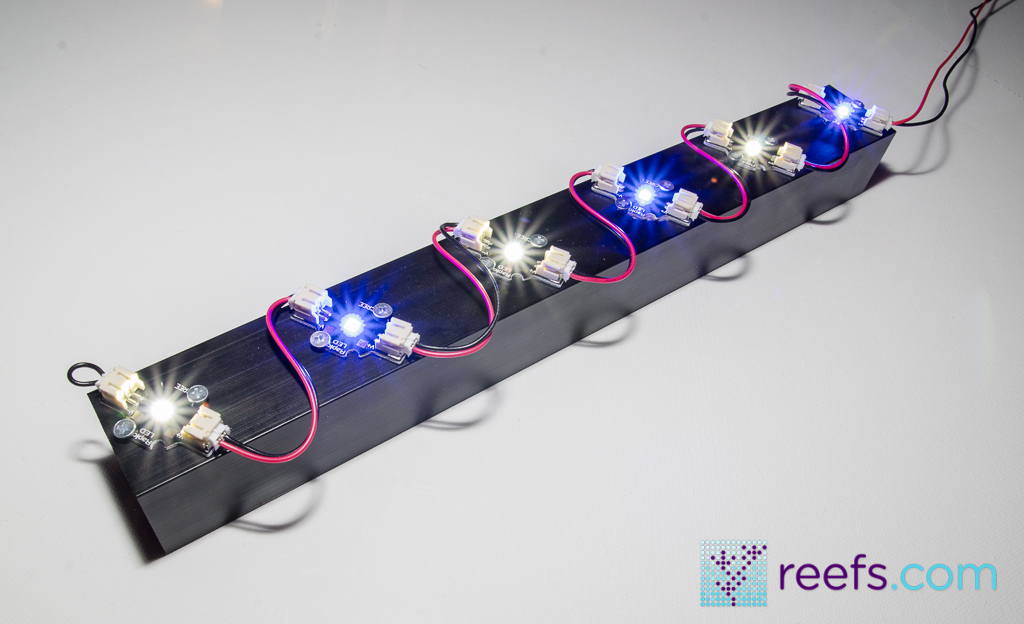 There are several kits to choose from on Rapid LED online store, depending on the number of LEDs you’re planning to use in your project. There are both dimmable and non-dimmable options available. I received the 6 LED non-dimmable kit ($59 at the time of writing this article) for this review, let’s check what’s included in the package: 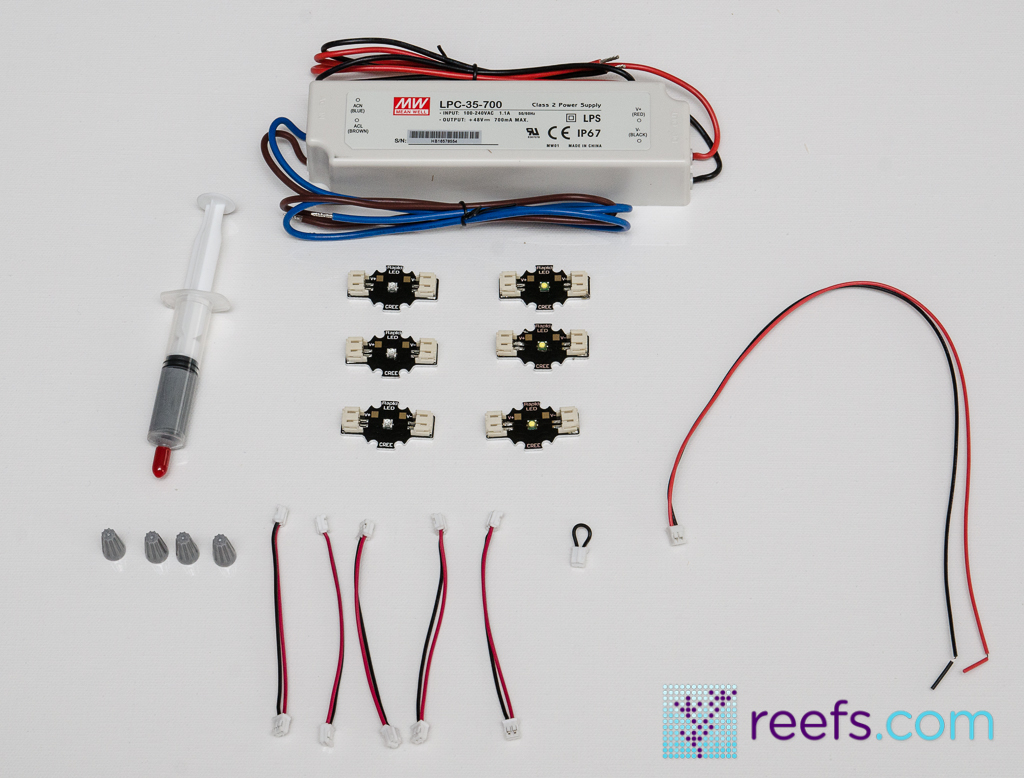 -5 pieces of LED to LED wires (again, you can choose from several available lengths, depending on your LED arrangement)

-one driver jumper (to connect LED string to the driver) 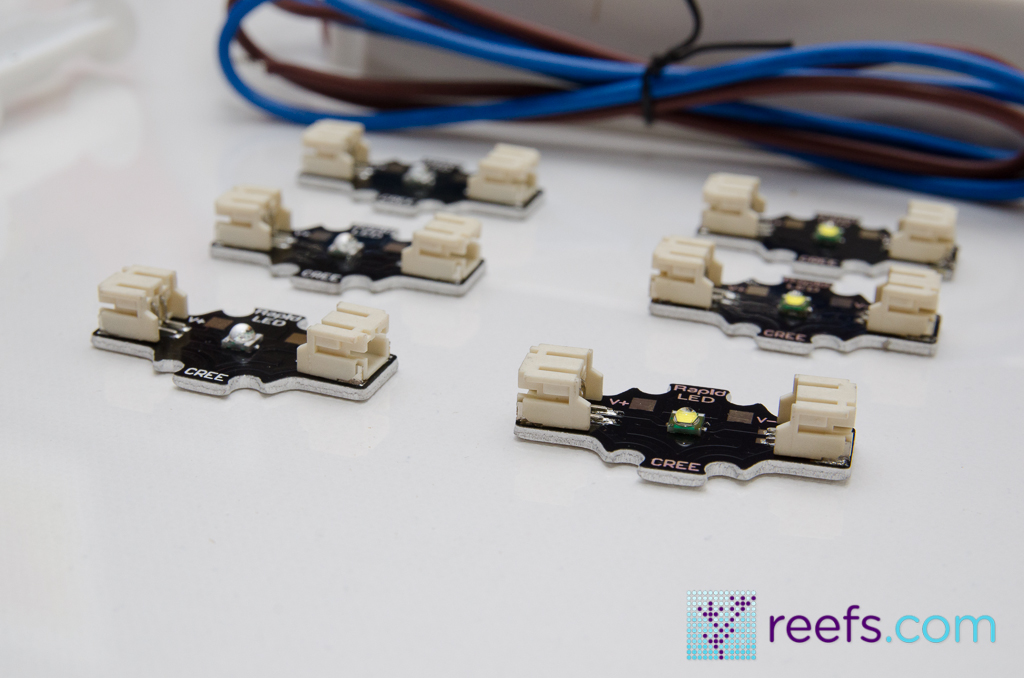 It’s worth mentioning the kit has a great deal on customization. Aside from letting you choose optics and wire length, RapidLED can send you any white-to-blue ratio of LEDs. You can make, for example, an all white light to grow macroalgae in the refugium or all-blue to supplement metal halide lights. Or anything in between… 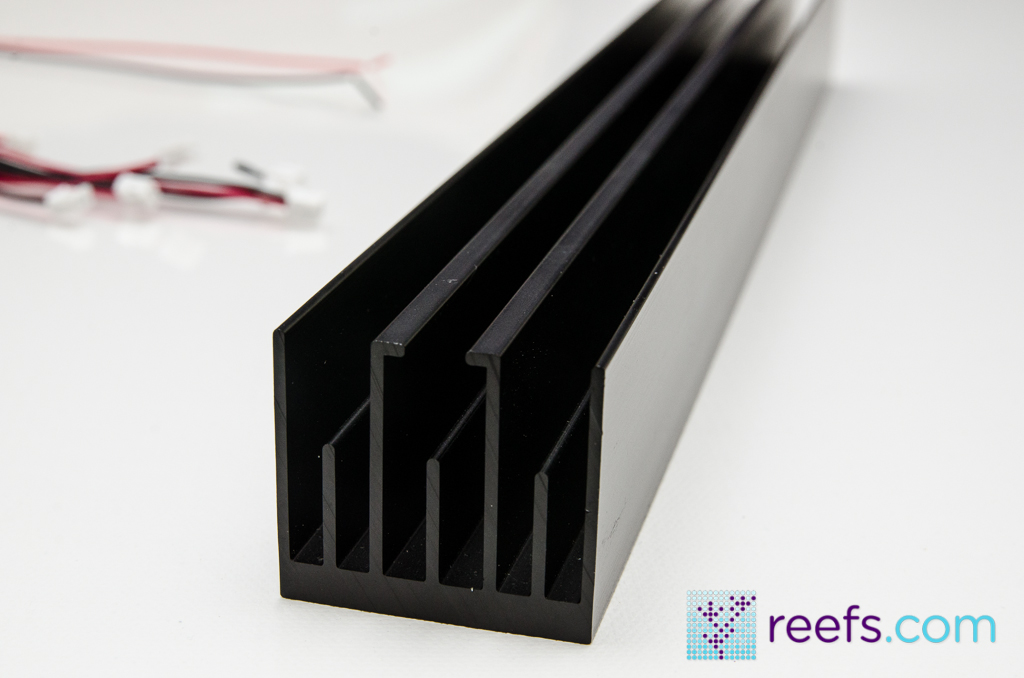 The only thing missing in the kit is heatsink, which you have to order separately. I think it’s a good move not to it, that way RapidLED keeps the price of the kit low and let customers pick the right heatsink for their projects. There are several heatsink sizes available directly on RapidLED website, both regular aluminum and nice looking black anodized ones. The one I got with the kit is anodized with pre-drilled and tapped holes for LED stars. 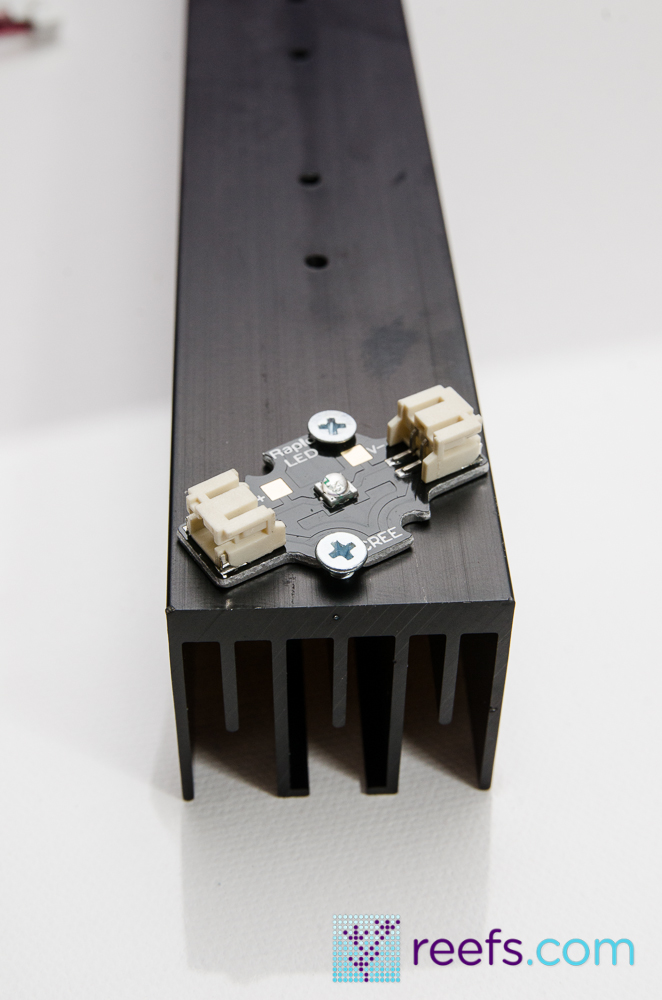 I mentioned that Rapid LED staff redesigned the solderless connectors and right now it’s even easier to connect the LED string together. Instead of one central board in which you connected LEDs together (as in the last version of those kits), the connectors are soldered right onto LED connection points, making the whole idea much more convenient to the user. 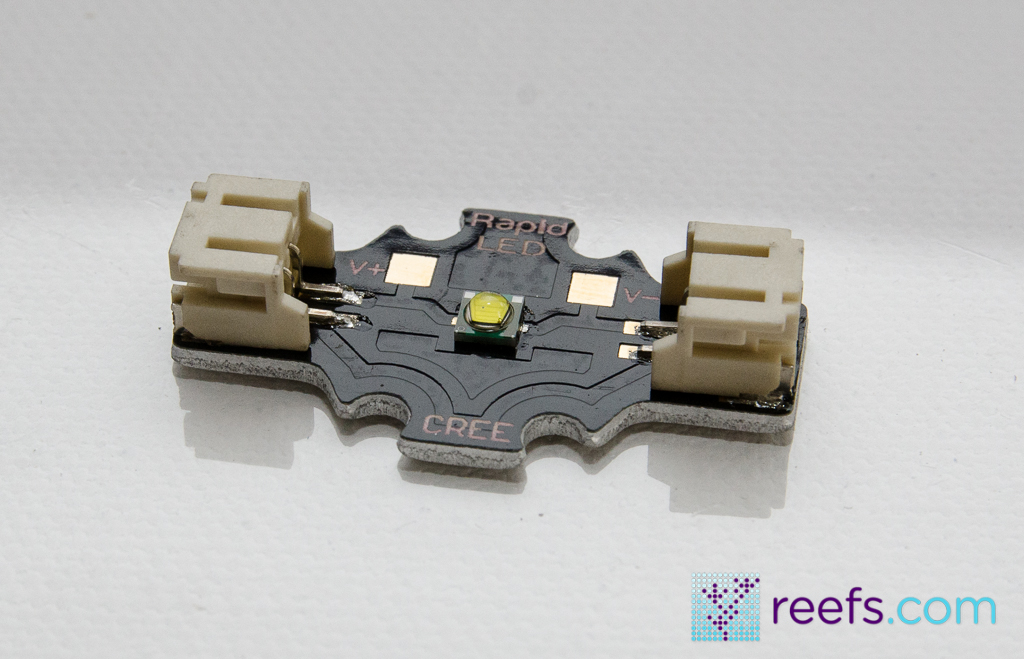 All you have to do is arrange the LED stars to your liking and connect them together with the supplied LED-to-LED wires (don’t worry, you can’t mess up the string’s polarization as the connectors fit only one way) 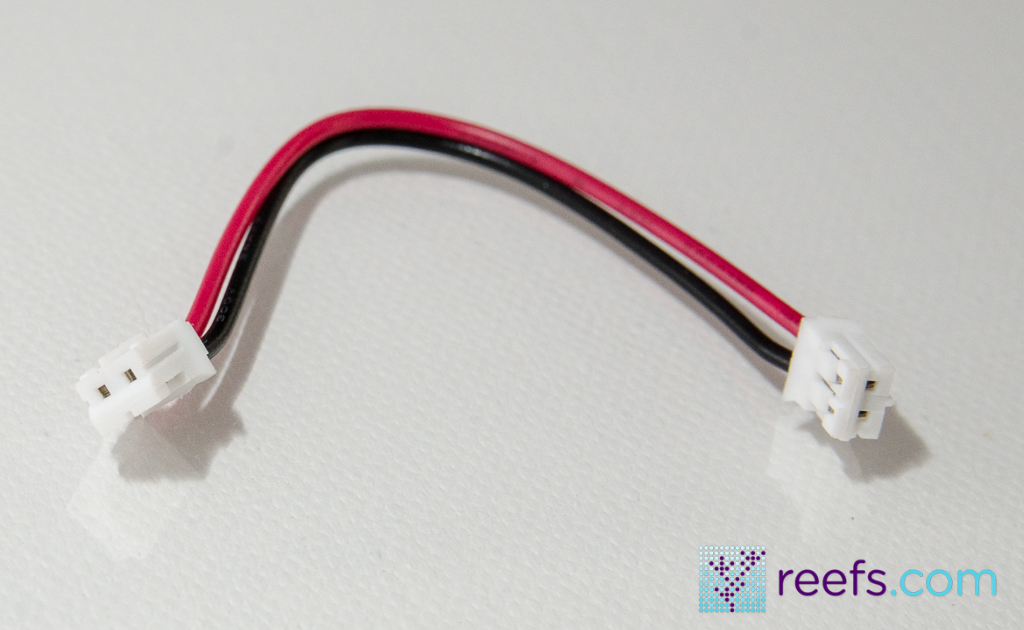 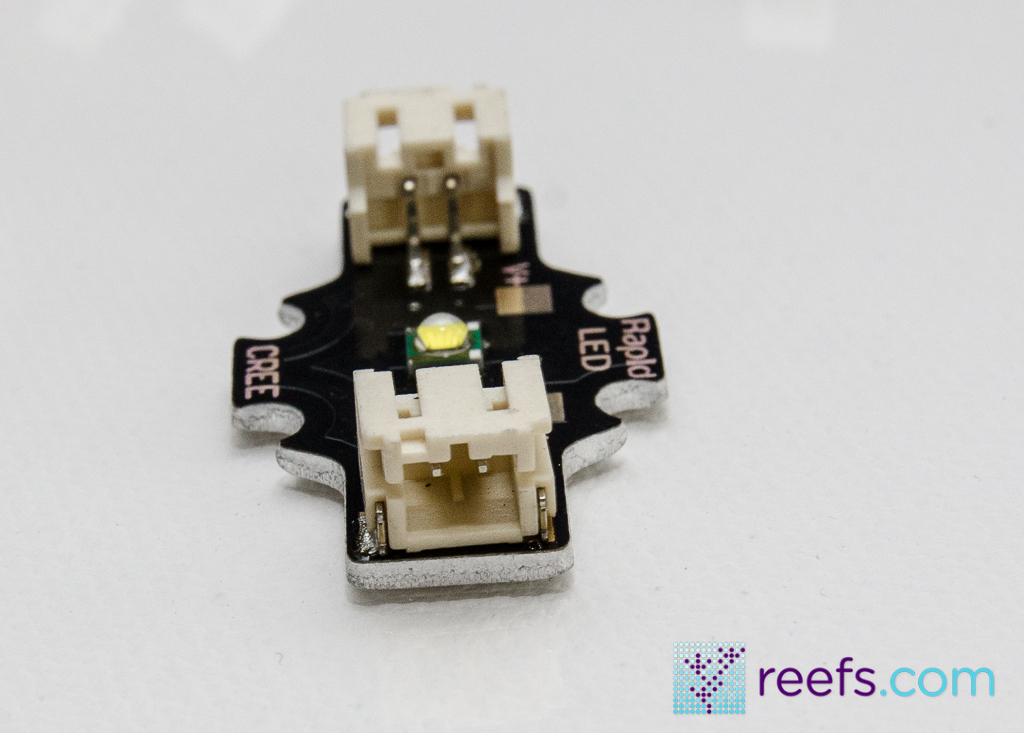 The whole installation process should be pretty straight forward to anyone who built a DIY LED light before and it took me less than 20 minutes to put the kit together.

For those that never did it before, there’s an online manual available on RapidLED website, as well as instructional video on their Youtube channell (you can check it here http://www.youtube.com/watch?v=j7fwVP61kiM&feature=plcp). 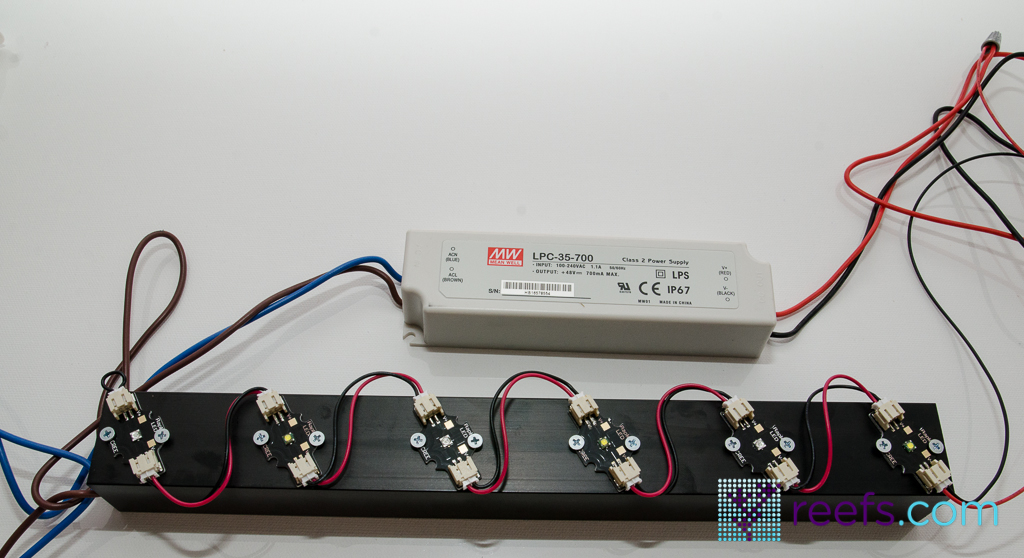 Summarizing, RapidLED solderless kits are a great solution for anyone willing to built their own light but don’t want to invest money in soldering equipment. The new, redesigned connectors allow for more flexibility in LED arrangement and the high level of customization when ordering the kit makes it highly attractive to buyer. 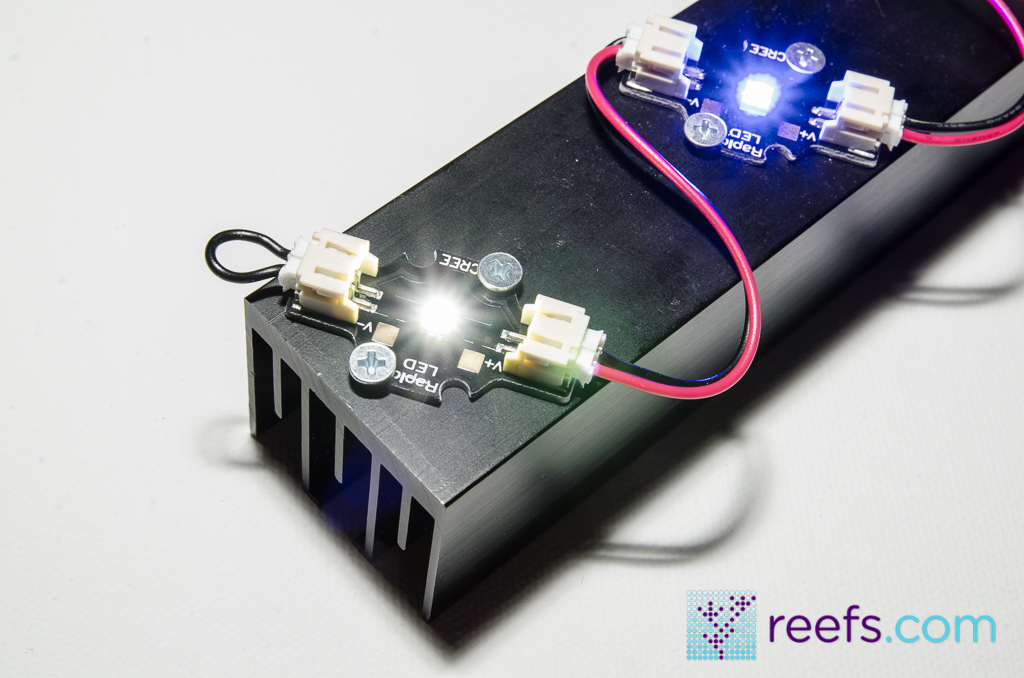 I can honestly recommend these solderless kits to anyone planning to built a LED panel for their fish tank. On top of all that, if you’re not satisfied with the LED color choices or number of diodes available in them, RapidLED sells all the solderless elements separately, making it easy to complete your own custom light. At the time of writing this review, LED stars with solderless connections are available in Red, Green, Cyan, Blue, Violet, Royal Blue, Deep Red and three Whites: Cool, Neutral, Warm. Check RapidLED website for more info here:  http://www.rapidled.com 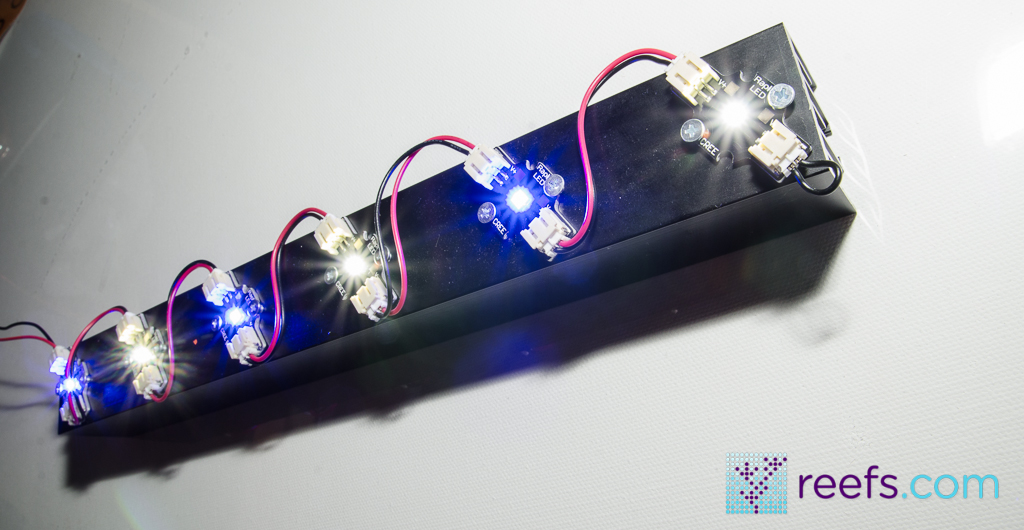