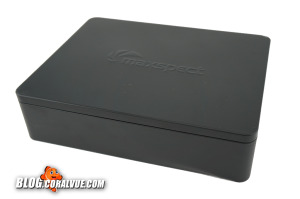 Coralvue recently received the final production sample of the 50w Maxspect Gyre, and based on the pictures they shared I fully concur with their statement of, “WOW“. A couple things have been improved upon since prototype units were released, including a stronger magnet, a super sleek intuitive controller and some accessories to boot. It also seems that the “Riptide” name has gone by the wayside, sticking with the simple moniker of “Maxspect Gyre”. 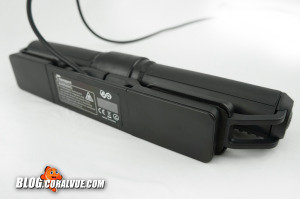 The stronger magnet is a much welcomed improvement. The first unit touted the ability to easily reposition the gyre, however I want a unit that would stay put once we found the happy place, even when bumped. The production unit claims it will hold onto glass up to 3/4″ thick.

Prototype units came fitted with the most basic of controllers, allowing the pump speed to be turned up or down, with a simple pulsing mode built in too. Now we knew from the get that an upgraded controller would be fitted into the final product, but we were unsure as to how many features would come with that controller. 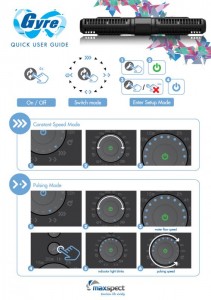 Since we haven’t had the chance to play with the production controller first hand we’re just speculating based on pictures, but we can tell you that it will have these modes built in: Constant Speed Mode, Pulsing Mode, Alternating Gyre Mode and a Feed Mode. The Alternating Gyre Mode will allow users to have the paddle move water one way, then reverse the paddle in an opposing direction. We’ve been told that based on the angles of the paddle the reverse mode will move less water, however the accessories included make us think you could really tune this thing to go both ways with a vengeance. 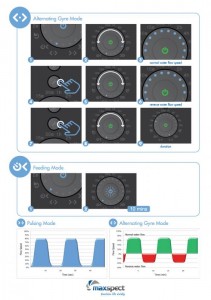 Accessories will be included in the super sleek packaging that will allow the user to fine tune the Gyre to their specific application, and keep some spare parts on hand. High five to Maxspect on this, a fantastic idea! Per Coralvue, “the Gyre comes with an extra set of A and B paddle wheels.  These come in handy when you want to configure the Gyre to run in regular mode and then automatically change to reverse mode.  You can play with different combinations of paddle wheels (A/B, A/A, B/B, B/A) and produce different flow patterns with a single pump.” 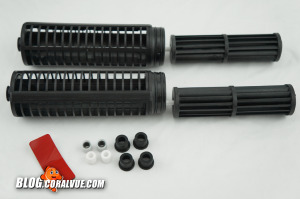 I’ve been contacted countless times regarding pricing and availability of the Maxspect Gyre, to which I provide this answer: This is a brand new concept in flow, with a few units provided to people in order to give feedback direct to Coralvue and Maxspect. These guys aren’t going to be releasing a garbage copied product, and some real-world fine tuning is necessary. A company can R&D and tune a product all they want, but until it lands in various consumers hands that have different aquariums and minds to install them, issues will be overlooked. These pumps are absolutely a game changer. Please be patient, they will be worth it! I think it’s admirable that Coralvue/Maxspect is going the extra mile to provide a product that will work better than advertised, which in my experience, it has. 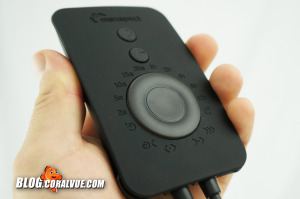 So far we’re being told these release dates, but again, please be patient as these come to fruition: