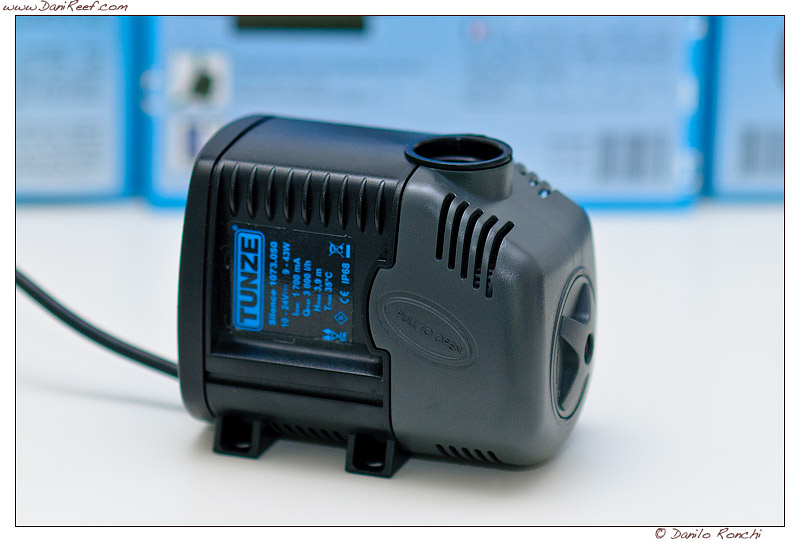 As we have already had occasion to comment in the test on the pumps Tunze, we were able to criticize the behavior of the electronic return pump Tunze 1073.050, a pump with incredible quality, but that it hadn’t impressed with the data we measured. After contacting the company in conjunction with the publication of the article, the same Tunze assured us that it would provide a new pump to redo all of our tests.

As usual, we measured the prevalence, output and consumption. Unlike the last time when we went to sicce factory to make measurements complete and accurate, we just did our “homemade” test but now well standardized.

His technical characteristics are:

here with all the spare parts. 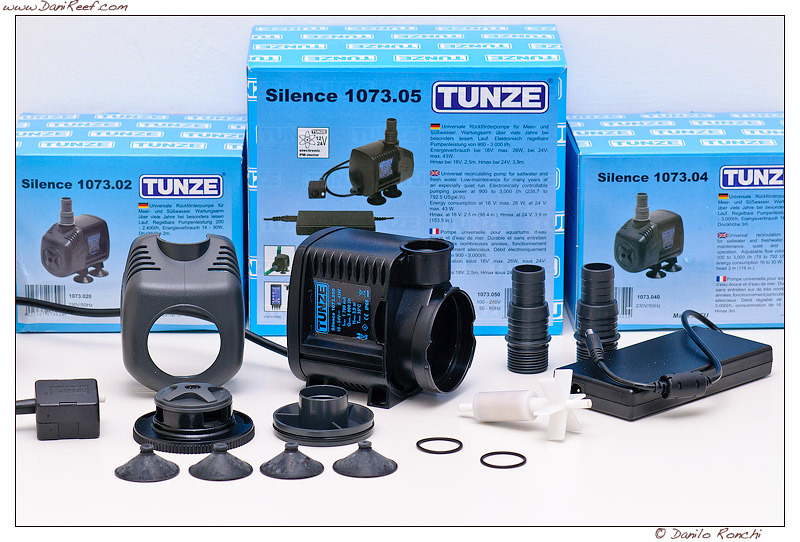 
This pump is a very special one since it is an electronic pump, which operates at 18V or 24V via a switch, so does not work on alternating current, and by his potentiometer it’s possible to vary the flow rate according to our needs. Thus in addition to the intrinsic safety that can give a pump that operates at low voltage, we also have the convenience of being able to adapt the outflow according to our needs, which is not a feature to be underestimated.

In fact it is so convenient to use it as a return pump and adjust the potentiometer when we want for example to make the water change. A great convenience, since in this way the water brought to aquarium is less and the level in the sump increases, making it easy to make the exchange of water without having to stop it.

Our test is then re-started literally in the garage.

The first test we did was to measure the delivery head. The test is very simple to accomplish. We dropped the pump into a bucket full of water, we connected the pump to a garden hose plastic held vertically, and we measured the height reached by the water column from the ground. We then removed the height of water in the bucket, given that the delivery head is the distance between the two levels of water.

Since the level was very high, we propose three pictures… 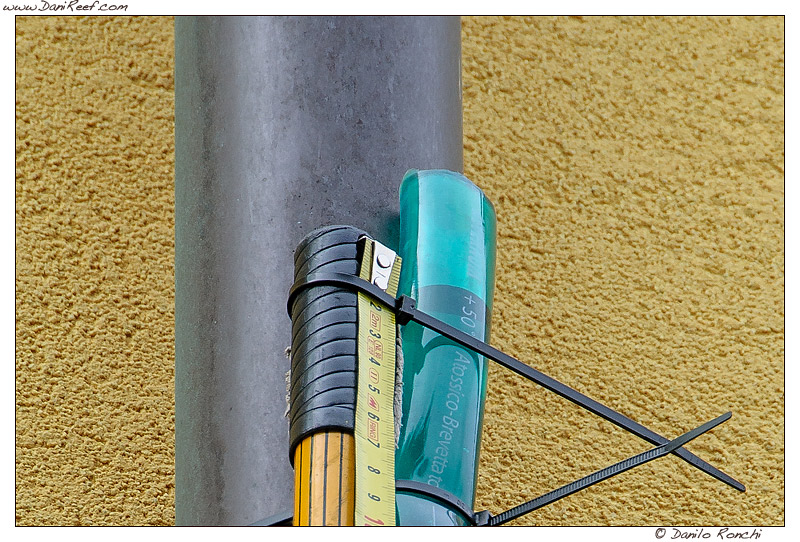 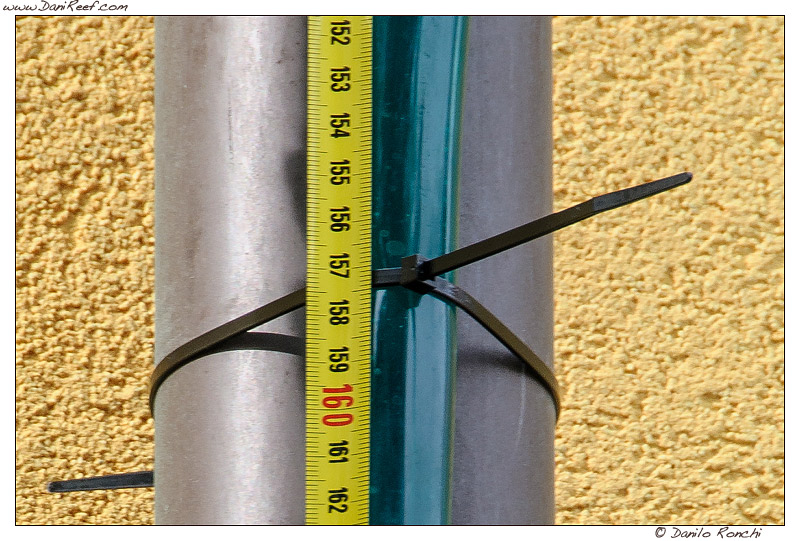 In this second picture we can see where we got the reference for measurement. The black collar was set at 3 meters from the ground. And since we have zero at the top near the highest altitude reached by the water, as we saw earlier, we have a total of prevalence, calculated from the ground up to 300 +157-1 = 456 cm 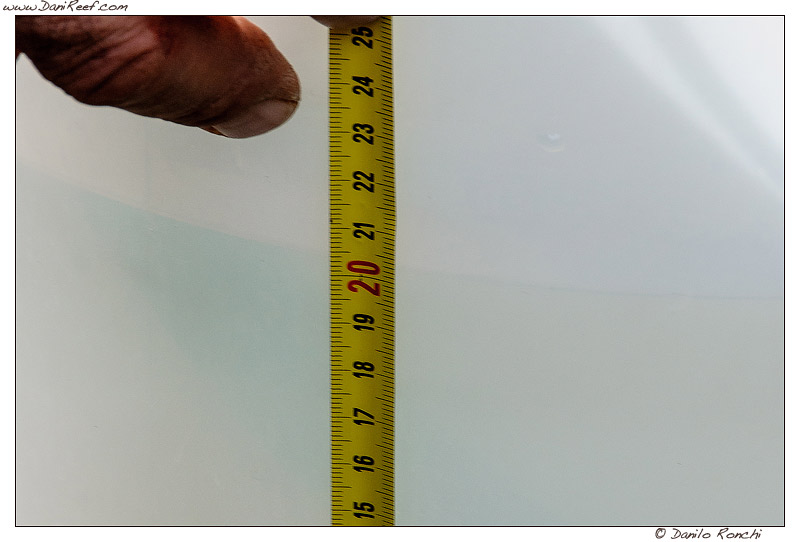 Measuring the flow rate has been much more complex and the result only approximate but nevertheless useful for comparing similar pumps, and especially to compare the result of the new tunze Silence 1073.050 with the old already measured.

Placing in fact a pump in a container, its output was affected too much from the prevalence present in the bucket itself, and thus the decreasing the water in the container fell also the output. In any case, we measured the time it took to fill a 12 liter tank, and run 3 measures was averaged, and then we divided the time obtained by 12 liters, resulting in a capacity not perfect, but significant, especially for the comparison.

To fill the tank up to 12 liters to tunze Silence Electronic 1073.050 took an average of 25,9 seconds, the same time of the last measurations.

During the test of delivery head we also measured the power consumption with current clamp, but as it was also impossible to measure the power factor, the offset between the real and apparent power, so the result is only and exclusively as a curiosity. 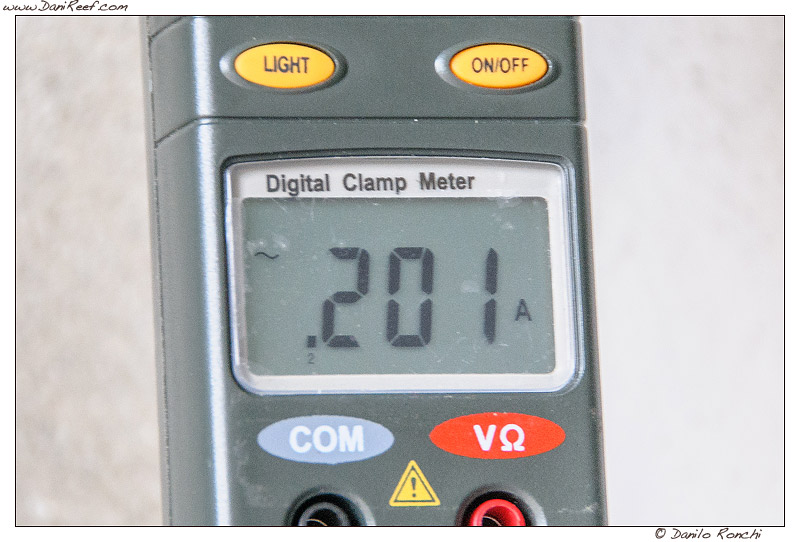 We also measured the values ​​in the case of minimum power of the pump, obtaining a prevalence equal to 162 cm, a time of filling of the tank equal to 41.16 seconds and a consumption of 20 watts.

Interpolating the output data with those already measured in sicce, seen that the bucket of test was identical we can vary the measurement table of the pump in this way.

The measure of the delivery head has surprised us very positively this time. The previous time the pump was measured with a -21% at 308 cm, but now we have measured up to 128 cm more! That is a total different story.

Given that what we have measured is virtually identical to the previous time, we present again the flow rate measured in the laboratory. With a deviation of 29%.

we can not say much about power consumption, since it was not possible to measure the cos (fi) or the phase shift between current and voltage.

Finally, just as a comparison, we give a matching value compared to data reported by the various pumps.


We considered consumption the same as the previous time. In this way, although its output has remained the same, the prevalence was even higher than the stated amount.

The pump tunze 1073.050 is a really interesting pump. As we have already written the fact of being electronic gives considerable advantages in the aquarium, on one hand a low voltage pump in water has potentially less problems in case of electrical leakage, and the fact of being able to vary the flow rate between values ​​very different between them, 2143 l/h with 436 cm of head max or 1300 l/h and 162 cm of head max can be extremely convenient in handling. Certainly it would have been better if the flow were closer to the measured values​​, but given the particularity of the pump, we can still feel quite satisfied. Of course, this in the face of a price not just popular for about 160 euro, probably justified by the complexity of construction of the pump, is the offering to pay for our increased security in the tank. I hope that in the future we will use all the pumps in the aquarium at low voltage.

I must emphasize, for objectivity of the test, this second pump has proved to be slightly noisy. In any case, I have done extensive research on the internet to see if this was or was not a problem that is taken into account, but I have not found any feedback about so I tend to think this is just a bad one, since the first pump I had was absolutely perfect from this point of view, and I’m pretty sure that in such cases the tunze assistance will let you have a perfect specimen.

I can only add that after trying it myself I’m so in love that I’m still using in my sump.

Many thanks to tunze for providing us the pumps subject of this test.