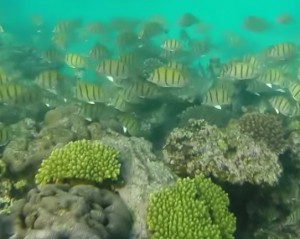 While I like to keep my writing directed towards things that will help readers be successful at reef keeping, this one is too good not to share. A man was flying his R/C plane over Osprey Bay in Cape Range National Park (Exmouth, Western Australia) and became disoriented in the glare of the sun. The plane ended up tumbling down from the sky and splashing onto a reef. The glider was instantly greeted by some fishes, and as it bobbed at the surface we catch glimpses of some fantastic animals including sea turtles, corals and even a shark. Eventually they recovered the now destroyed glider, but the GoPro was in perfect condition with some great footage that we can now all drool over. Hope you enjoy the video as much as I did!