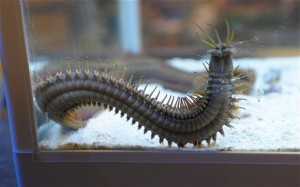 We all know the inherent risks that come with using live rock. Sometimes we’ll even be gifted hitchhikers on new coral. One of the most undesirable pests has to be a giant worm from the Eunice genus, commonly labeled a ‘Bobbit worm’. Some of these worms can grow to massive sizes while leaving coral and fish skeletons in their wake. All the while evading detection by stealthily moving within your aquascape, only to reveal themselves at night.

This reefer, known on YouTube as gurutek, finally had the privilege of seeing the size of his little monster while breaking down the tank in preparation for a move.

He went on to say, “I was breaking down the tank (as I was moving it), hence it looking shoddy. That unice was in there 2 years before I noticed, and only noticed because I had whole coral colonies missing after a single evening. I first saw it after I spent a few nights sat up (after lights went out) for about 3 hours per night looking for the critter who was eating my corals. Even when I knew it was there, I only ever saw it 3 times within the space of a year. It hides in the rocks, and only comes out at night, impossible to catch without taking everything out the tank.”

Just another reason to keep that red flashlight near the tank for the occasional midnight observation, particularly if you’re losing entire coral colonies in a single evening.