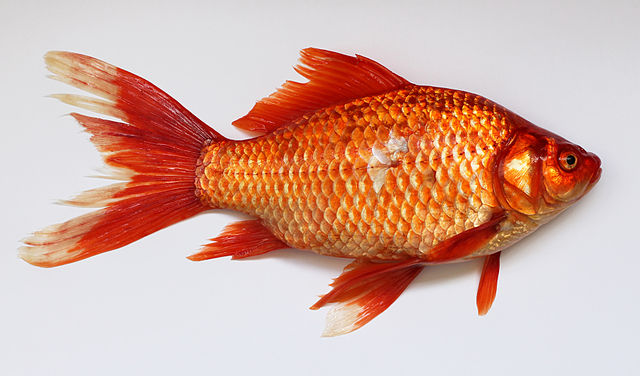 It really shouldn’t need to be said. But, apparently, even in the aftermath of ecological disasters such as the introduction of nonnative snakeheads into U.S. waterways, people still need to be told that it is a very bad idea to release aquarium pets into the wild. And, we apparently need very harsh laws to dissuade hobbyists from engaging in the practice. Accordingly, Colorado wildlife officials are presently seeking an individual who has released some number of goldfish (Carassius auratus auratus) into Teller Lake #5 near Boulder, Colorado.

According to a spokesperson for Colorado Parks and Wildlife (CPW), the illegal release (of perhaps a few individuals) occurred about two years ago. Clearly, those founding individuals were able to establish a breeding population in the area. Now, at this time, the population of the invaders is estimated to be approximately 3,000-4,000 individuals. The concern among local wildlife experts is that these feral fish will out-compete native species for precious resources, if not ruin the natural feel of the lake for its human users. Threatened fish species include channel catfish, bluegill and sunfish; various plant and invertebrate species may be at risk as well.

It seems the only reasonable option for CPW to eradicate the non-natives is either electroshock or draining, which are both fairly expensive and potentially damaging to the delicate lacustrine ecosystem. Any fish recovered from the lake will be used as feed in a raptor rehabilitation facility. While some residents have expressed a desire to capture some of the feral fish as pets, CPW has discouraged this idea strongly, stating that they want to avoid creating an impression that collecting fish in this way for fun is acceptable management practice.

For information on this story, please visit: https://gma.yahoo.com/3-000-plus-invasive-goldfish-threatening-whole-colorado-152609378–abc-news-pets.html.