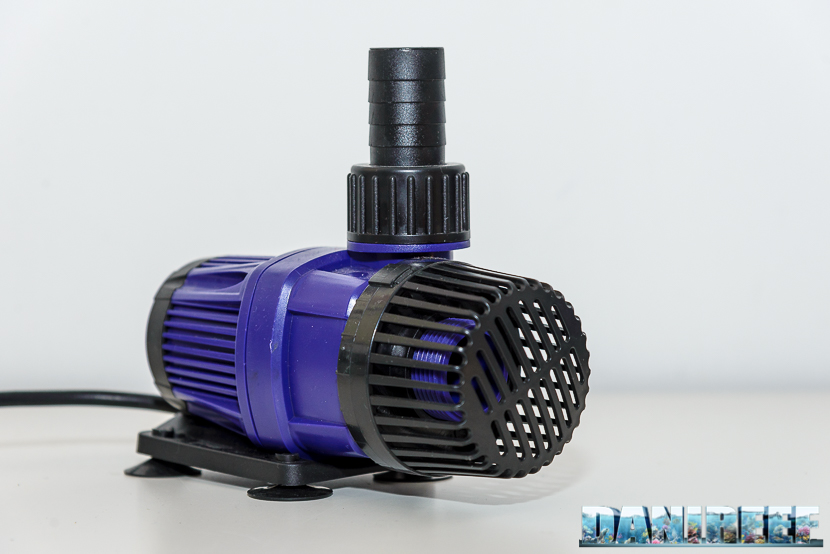 We recently finished our in-depth testing of the Big World BQ-5000L, imported to Italy by Corallinea.


We measured the hydraulic head, flow rate, power consumption, and noise, and as the BQ-5000L is an electronic pump with a digital external controller, we were also able to test the flow rate and the power consumption at each setting.

For the hydraulic head, we used the usual static method, but, as the BQ-5000L is said to have a 5 m head we had to move things around a bit. For the flow rate, we used a flow meter, for the power consumption, a probe meter, and finally, a phonometer for the noise.

What stands out about the BQ-5000L is its completely Chinese manufacturing and the competitive price at which it is sold.

With an Italian price of 120 euros, this is a modern electronic pump, adjustable by an external controller, with incredible performance and very good economic and technical efficiency.

The pump is pictured below; it is very straightforward. The accessories are reduced to a minimum. 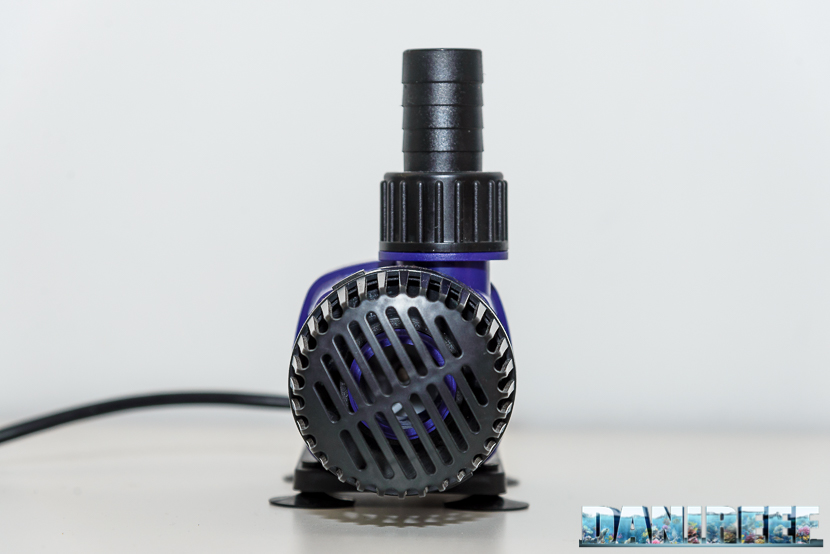 It is just the pump, the power supply, and the suction cups for holding it at the sump bottom. Nothing else.

We tried disassembling the pump. 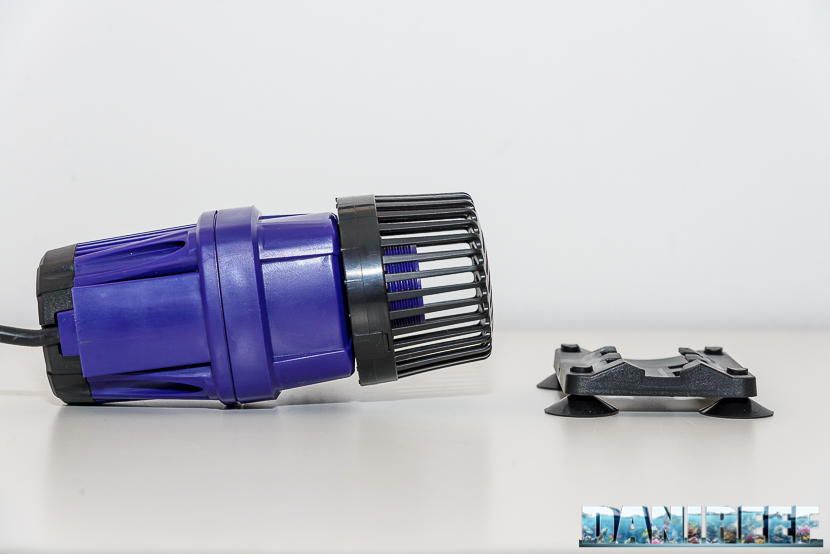 We didn’t know if the two plastic parts screwed or glued together. To avoid breaking the pump, we didn’t force it too much. 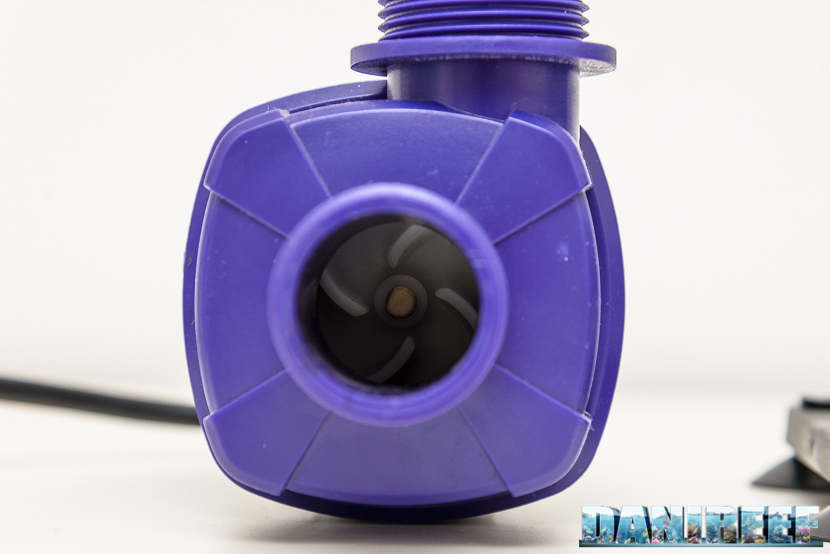 To find the impeller, you have to rotate the cover.

We used the Corallinea Big World BQ-5000L for a few months in our tank as a return pump, and appreciated its low noise in relation to the flow rate and head, as well as the very useful external controller. Our only concern is the pump’s light weight, which may allow it to move around; it is necessary to find a way to stick it to the sump while avoiding touching the sump walls and producing high noise due to vibrations. 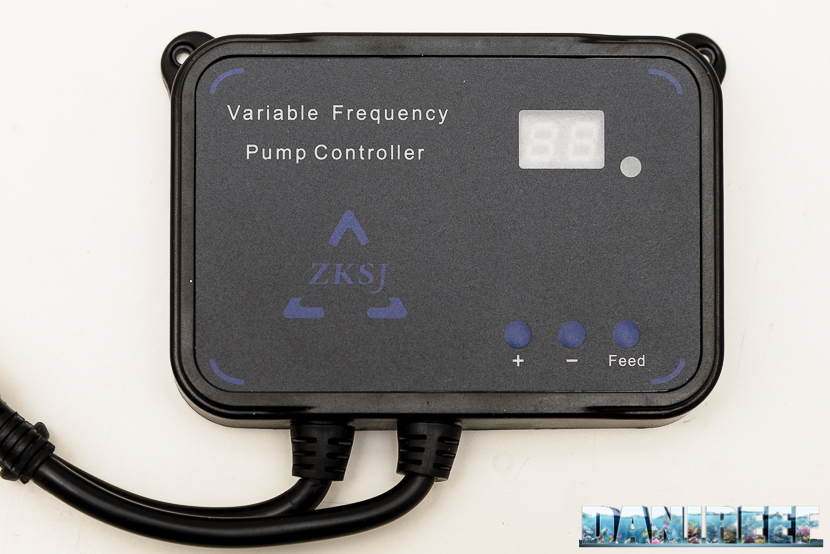 As you can see above, the controller is very simple, there is a plus and a minus button to adjust the pump’s power, and a “feed” button to turn it off briefly for feeding fish or corals.


The first thing we measured was the pump head. This is usually very easy to do, but this time it was a bit more challenging, as the declared head is 5 meters. Moreover, the pump has 20 different function levels, and we tried to measure the head for each of them.

Unfortunately, we were only able to measure the first 11 levels and the last one, which is also the most important one. In order to do this, we placed the pump in a bucked filled with water and connected it to a gardening hose which we held in a vertical position. We then measured the height reached in the tube by the water. Because of the height required, we attached the tube to the house drainpipe and then we held the meter stick with the 0 value at the water level in the bucket. We measured the first 11 steps and then got up on the roof to measure the highest head. 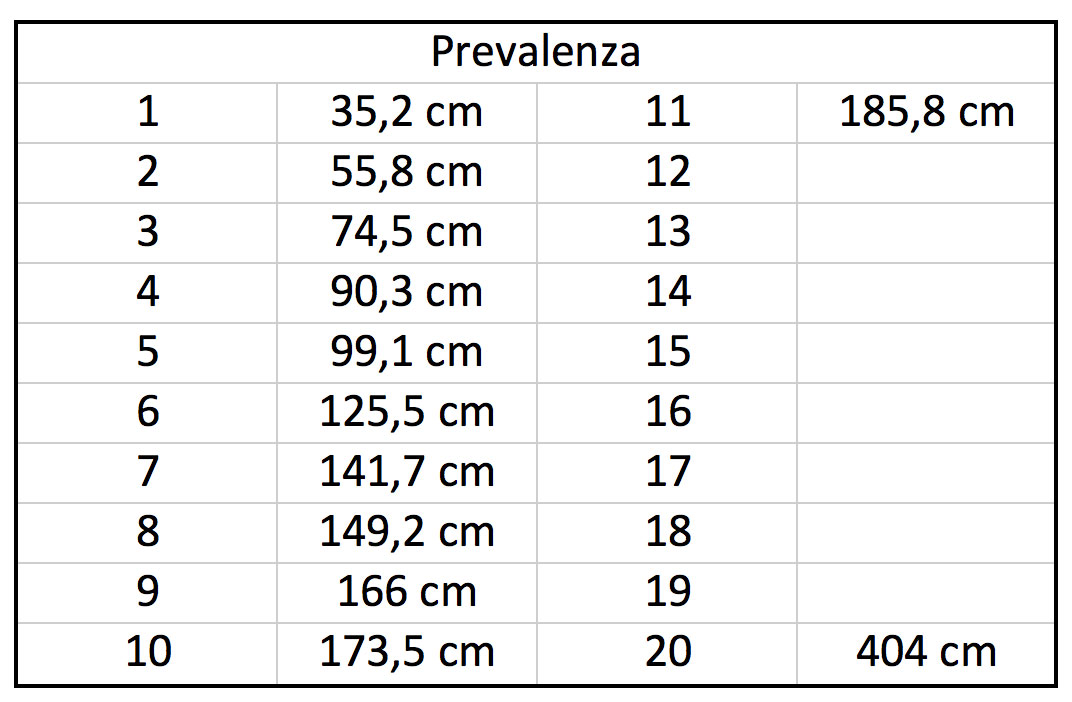 
Measuring the flow rate was easy thanks to the new DigiSavant DIGIFLOW 6710M flow meter. We pointed the flow straight into the flow meter via connection tubes, and then read the measurement reading on the display in liters per minute, and then calculated liters per hour.

We measured flow rate for each functioning level in order to create a complete picture of the changing flow rate. 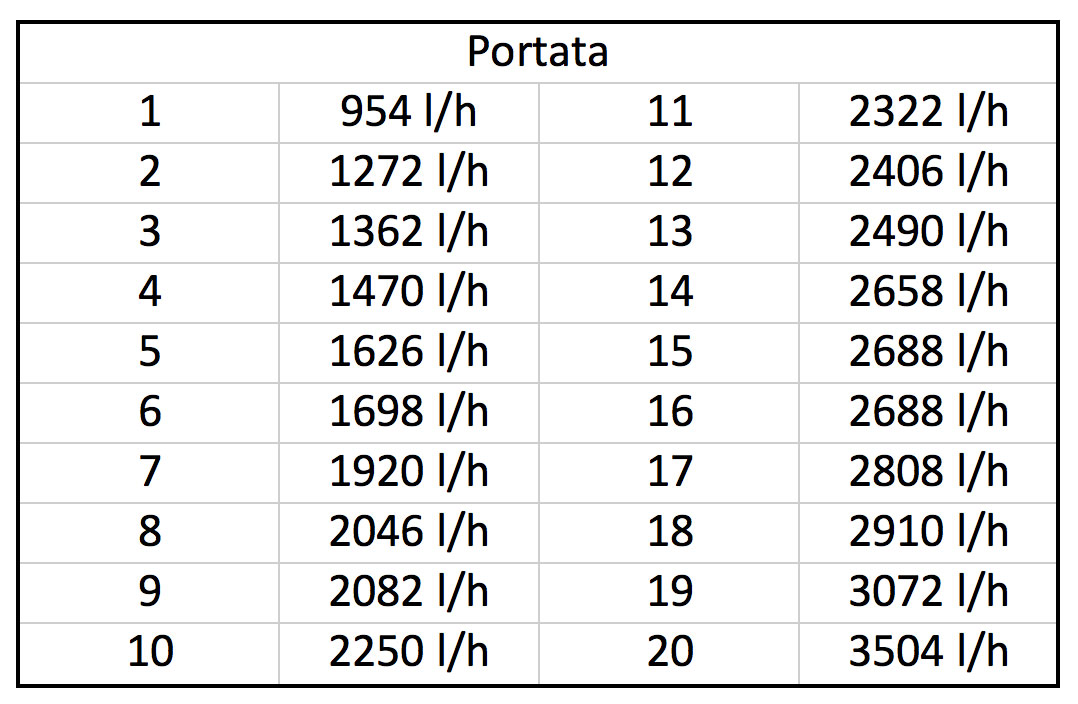 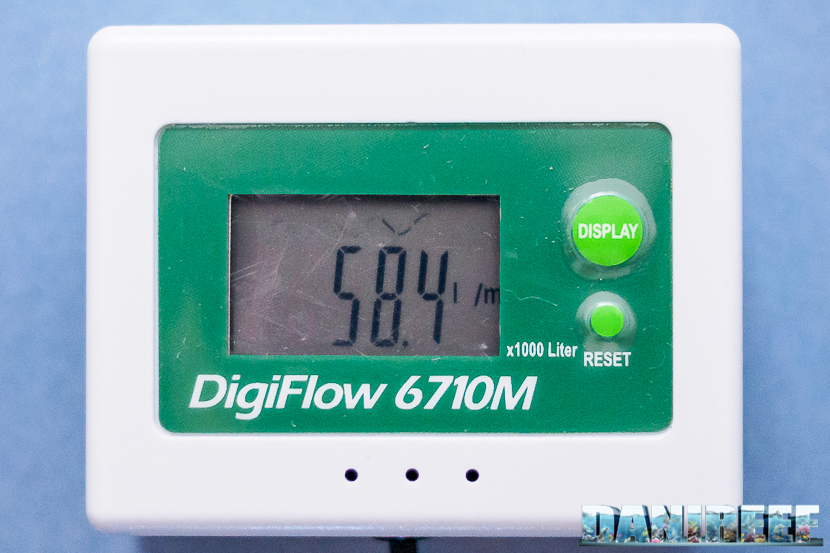 Instant power consumption was much more difficult to measure. The current probe recorded a maximum electric current of 0,426 A, but this is only a partial measure, as it was impossible to record the power factor (cosφ), which would have given us a better idea of the actual consumption. 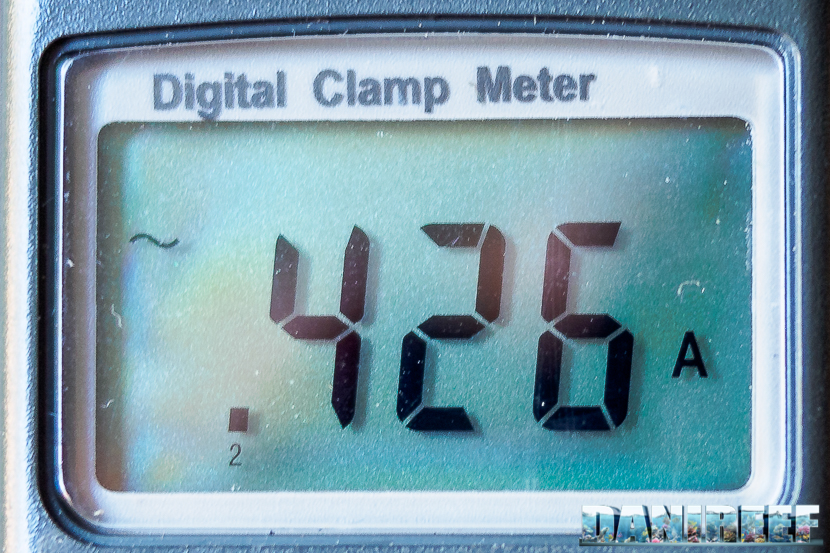 Usually a pump with a neodymium magnet, like Corallinea, has a cos(fi) with a value of about 0,85. In this case, the energy consumption of the Corallinea BQ-5000L is 97,98 watt x 0,85 = 83,3 watt. It’s a very close value to the 80 watt declared. We should also remember that the cos(fi) contribution was only assumed.

The apparent current of 14,68 watt (97,98-83,3watt) would not be counted by our home electrical counter, but this happens with any pump, Corallinea is not an exception.

Considering a power consumption of 83.3 watt and an energy cost of 0.27 euro per kwh (in Italy at the time of this review), we could use this pump continuously for a whole year for a consumption of 730 kwh, for a total cost of 197 euros per year, or 16.4 € per month.

In the following table is the resulting consumption, with cos(fi) corrections excluded. 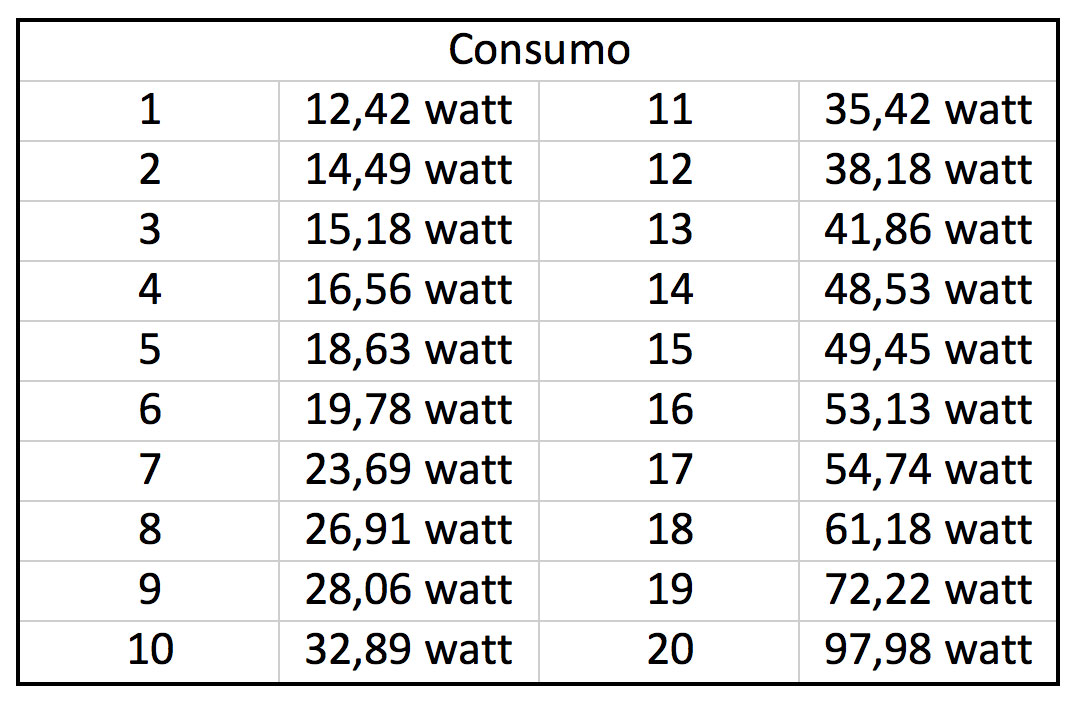 The real consumption results follow, and we will use these for our later estimates. 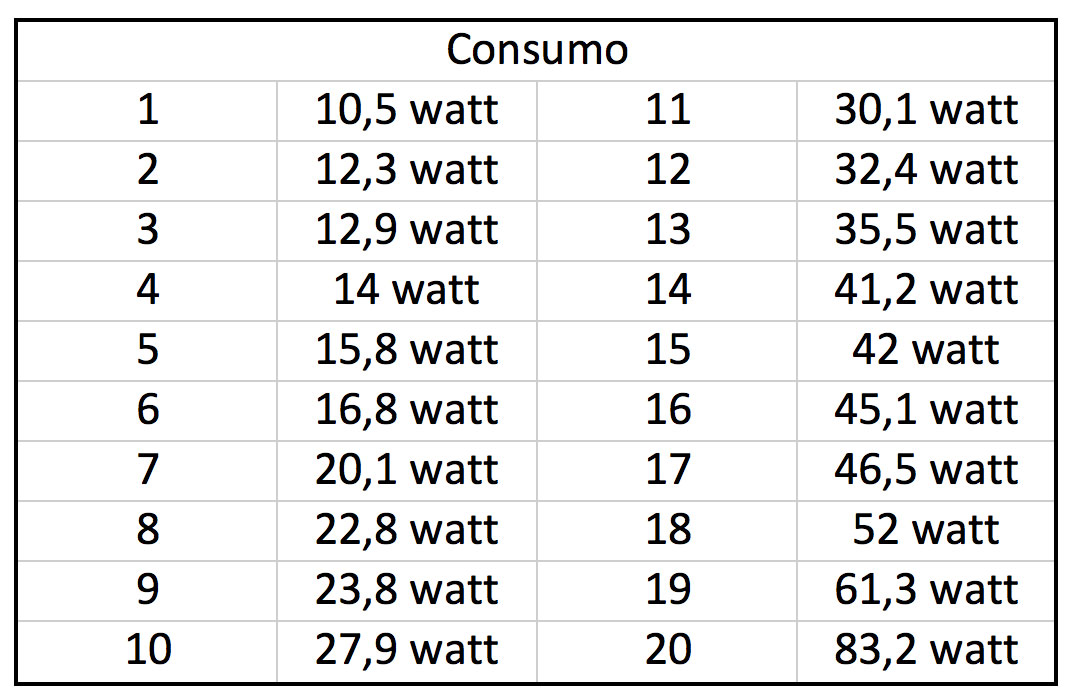 We measured the acoustic pressure at 1 meter from the pump.

Environmental noise was measured at 30.1 dB. 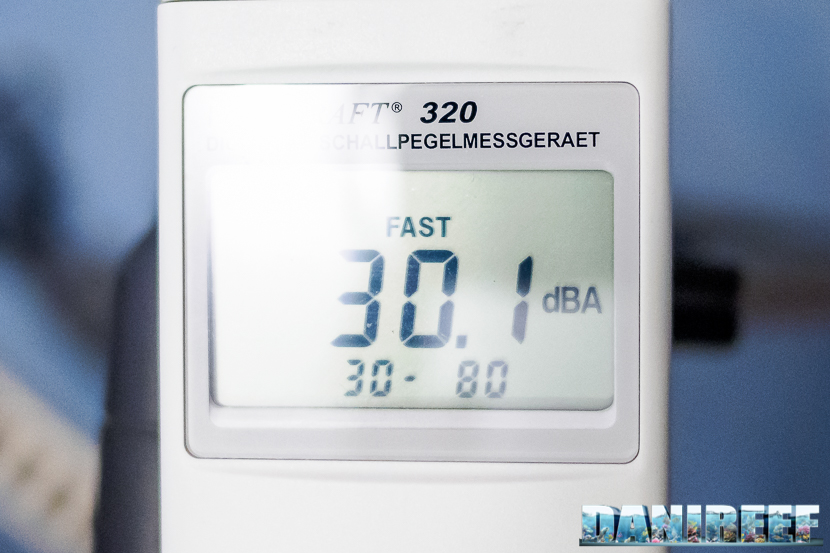 We switched the pump on and measured the noise at velocity point 10 and 20. 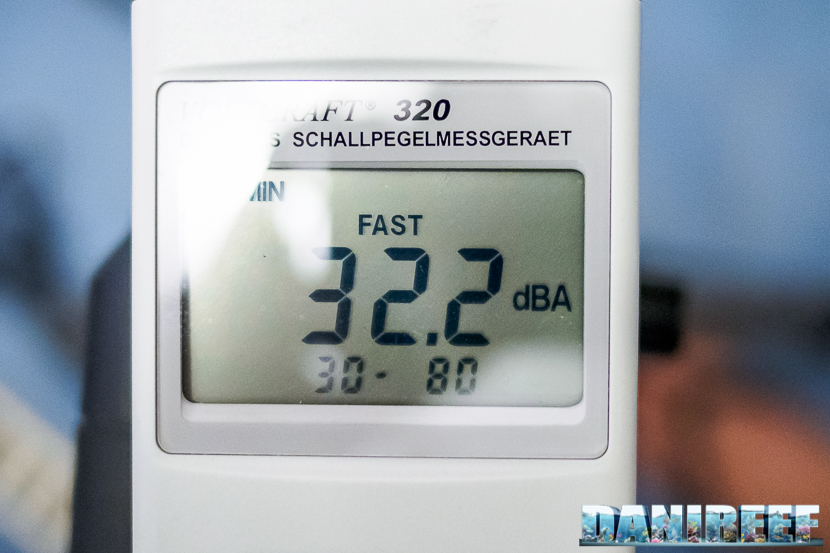 At velocity 10 the pump is barely audible, with only 32.2 dB noise. 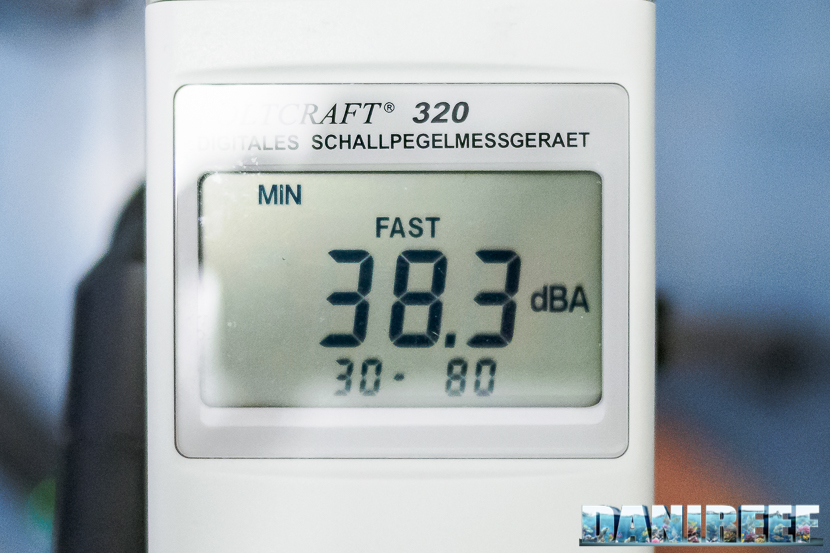 At velocity 20, the noise increases to 38.3, 8,2 dB above the environmental noise, an acceptable value considering the power of this pump. Moreover, the noise comes from the electrical engine rather than vibrations, which is easier to muffle insde the aquarium cabinet.

To measure the noise I used a professional phonometer: the VOLTCRAFT 320 digital phonometer IEC 651 Type II which is extremely accurate. Considering the type of noise we needed to measure, all the measures were recorded with dBA wave attenuation.

An electronic adjustable pump is one of the best things to have in our sumps; the simplicity with which we can adjust the power in order to adapt it to any conditions is priceless. For example, I can lower the pump flow rate when I do a water change, so I don’t have to switch it off completely while removing water from the tank. By doing this, I avoid lowering tank water level and leaving the pumps out of water. From a security point of view, this 24V pump has made a really big step forward compared to the 220V pumps, and we hope all aquarium pumps will soon have this feature.

The market price of 24V pumps is universally higher than others, but the Big World BQ-5000L is priced competitively. 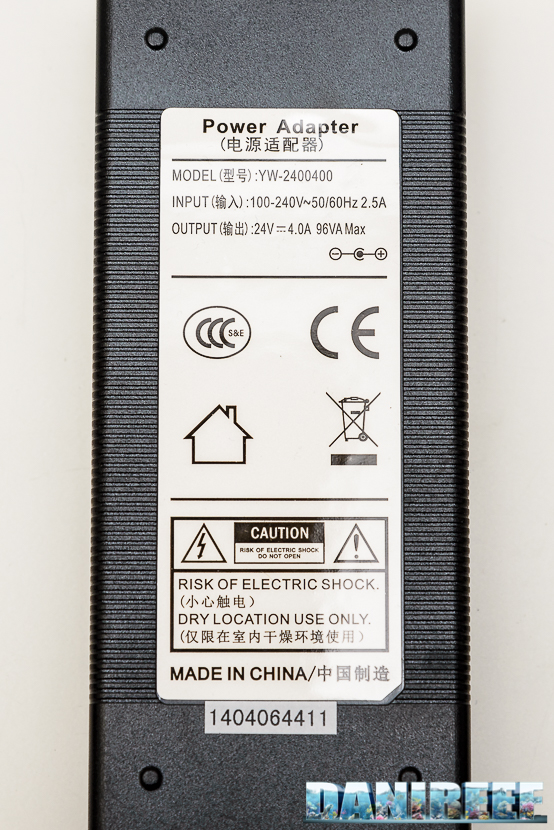 We’ll now compare this pump with other pumps’ measurements, which we have taken in the past.

Below is the recap table with the head, flow rate, power consumption, price and efficiency. The values in red are estimates, but they are sufficient for our purposes.

The following table is even more interesting, as we included values from other (previously tested) pumps: Eheim, Tunze and sicce. From the table above, we can see that, the Big World BQ-5000L is much cheaper to run. It also has the best flow per watt; only the tunze 1073.50 comes close, it has a lower flow rate but a better head with a similar efficiency.

The Big World BQ-5000L is definitely more efficient than the Eheim 1250.

There may be a difference in reliability over time, but we haven’t been able to test this; we can confirm that during our test we did not find any faults or irregularities in flow or head. 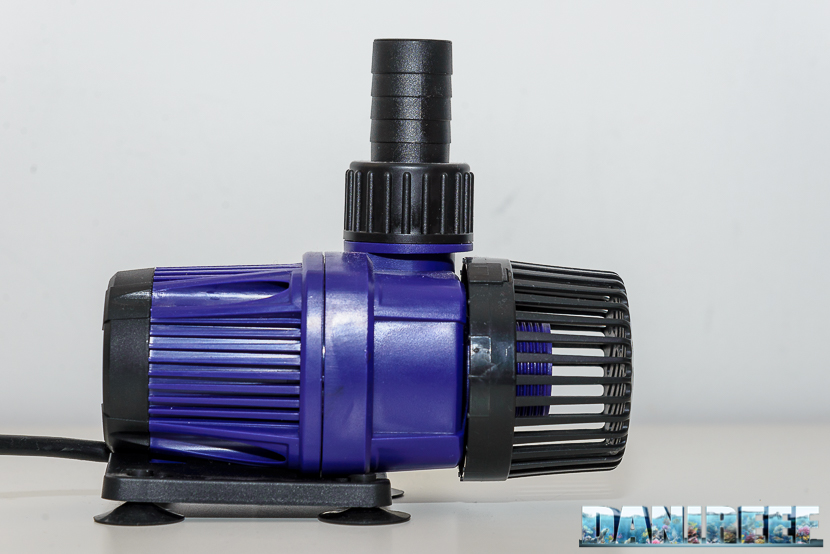 Let’s now compare those values with what was declared by the manufacturer.

The actual maximum head is 20% lower from the declared. The value is substantial, and one should take both this fact and the low price into consideration before buying it.


As we have seen in previous reviews, almost none of the pumps keeps their promises about flow rate, and Big World is no exception.


The power consumption is pretty much the same of the one reported.

There was no measurement to compare this value to, but 38.3 dB is very good.

Global conformity to the declared value


Finally, we can give this pump a general value of correspondence to the declared values in terms of head and flow rate.

We can not consider the power consumption because of how we measured it. 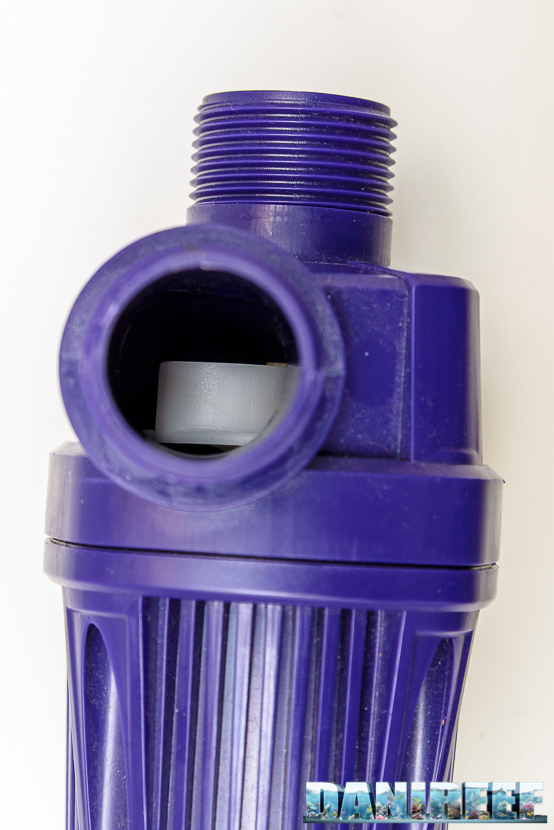 To figure out if this is the right pump for you, I suggest reading this article: Return pumps: calculating the flow, you can download our excel spreadsheet and calculate the exact aquarium-sump exchange that you need.

The reference value of the Big World BQ-5000L is of 1.415.616 l*cm/s, while the declared value should be 2.500.000. Remember that this value is obtained by head*flow rate simplified of their maximum values.

It’s a considerable loss, but the pump only costs € 120, a very low price for a 24V adjustable pump, and its performance is respectable compared to the more-expensive German or Italian pumps which cost more and also have lower performances. 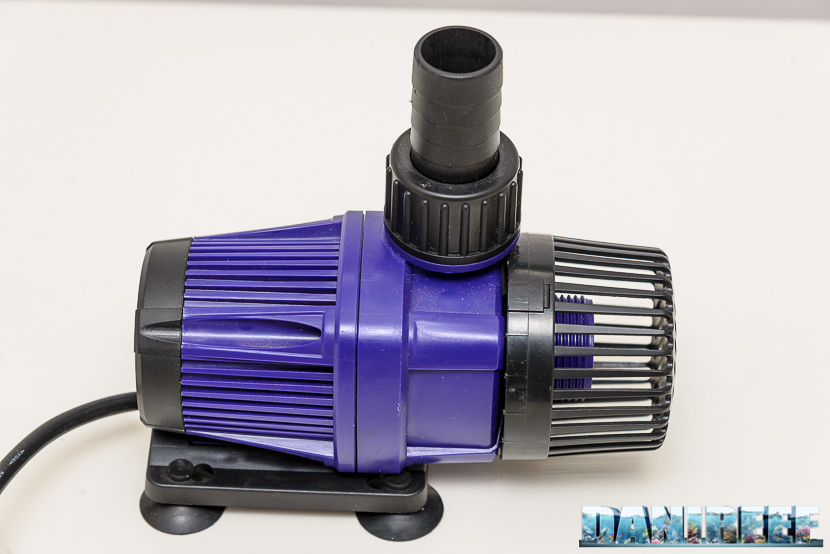 The only unknown is its reliability in time, but we haven’t experienced or heard of any faults. Feel free to leave a comment or report any troubles you may have had with this product.

The  plastic construction results in a very light pump for its performance level, and the low price is its biggest selling point, which both the manufacturer and the Italian distributor are relying on.