RNN Episode 100 (The Century Mark!!!) – Cleanup Crew How to: Choose a Select Few

Captive bred Seal’s? Problems in the Turks and Caicos and Clean-up Crew: Who and How To. This week Jeremy and Peter share the love with all as they hit the 100 episodes mark. Peter catches us up on the WaterBox Family Reunion and his crazy week in Florida. All this and more on Episode 100 of the Reef News Network! 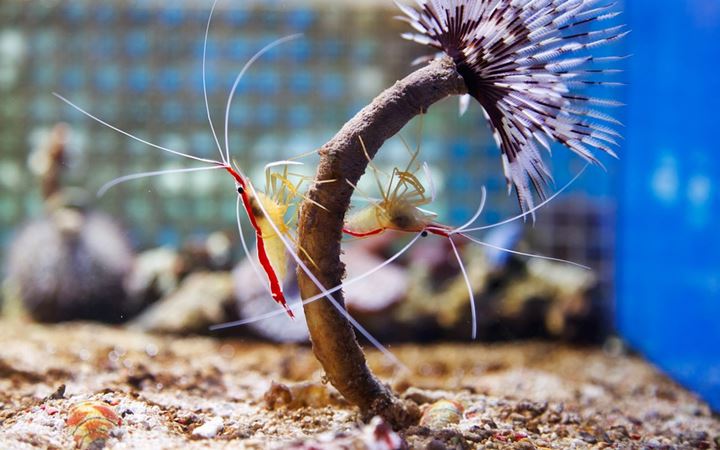 Jeremy- Seal’s Cardinalfish, Ostorhinchus sealei, is the newest captive-bred cardinalfish, brought to market by the team at Biota. Every new species of marine fish that’s bred for the first time ups the species tally by one: one more proof of concept, one more accomplishment in the world of marine ornamental aquaculture, one more step into uncharted territory, even if the path is somewhat familiar. Captive-bred Seal’s Cardinalfish being prepared for export from Palau. From Biota: The Seal’s Cardinalfish is a hardy and beautiful shoaling species of cardinalfish. These do extremely well in reef tanks and peaceful community tanks. When they reach adulthood, the Seal’s Cardinalfish have beautiful blue eyes and a yellowish hue with defined horizontal lines. Biota’s specimens are currently feeding on Reef Nutrition’s TDO C1, Piscene Energetics Mysis pellets, and Hikari mysis shrimp.

Peter- One of the largest reef systems on Earth, it teems with wildlife like friendly wild dolphins, and attracts more than a million tourists a year. But underneath the water’s stunning surface lurks a deadly disease, silently ravaging the corals which keep its denizens alive and protect the islands’ pristine coastline from storms and erosion. Stony coral tissue loss disease (SCTLD) has been dubbed the biggest threat facing the tiny British territory’s marine environment, and the most virulent coral sickness the world has ever seen.

Main Topic: Clean-up Crew How to: Choose a select few The clean-up crew are animals that keep busy in your tank removing non-living organic matter, sifting and aerating the sandbed, and keeping algae under control. Your clean-up crew will consist of a variety of animals each with their own function, working away in your tank.