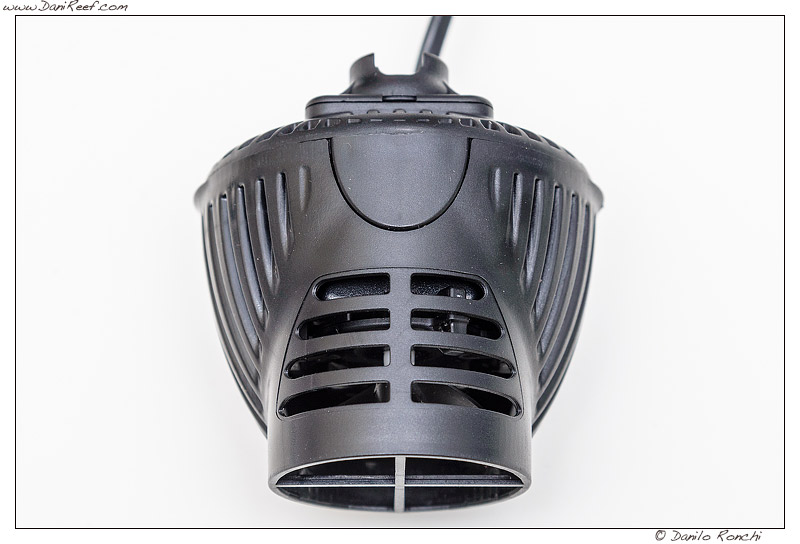 After getting to know the company Rossmont during PetsFestival fair 2013 at Piacenza, Italy, and be were impressed, we chose to test a pump Rossmont Italy Mover M 5800 in our marine aquarium.

The Rossmont Italy Mover M 5800 pumps are not electronic, but they work with a fixed flow rate equal to 5,800 liters per hour with a consumption of 10 watts. Respectable numbers as we shall see later. In addition, the pumps are designed and manufactured entirely in Italy, and this allows the Rossmont to give their pumps a warranty of 36 months, an extra year of warranty other than required by italian law. Above we can appreciate the luxury packaging of the Rossmont Mover M 5800, where you can see the magnet, pump, flow conveyor, the protective grille and brush cleaning.

We can then say they have an efficiency of 580 liters per watt consumed, compared to 643 liters per watt by the smallest non-electronic nanostream 6045 that with output of 4,500 liters per hour could be considered a direct antagonist.

The different footprint in water of Rossmont Mover M5800 and a Tunze Turbelle Nanostream 6095, the model that has the same dimensions of the nanostream 6045

Considering it from another point of view, and found that the cost of the pump price list is equal to 114.90 Euros (in Italy), we can speak of an economic efficiency of 50.5 liters of water for each euro spent, compared with 56.4 liters euro for the tunze Turbelle Nanostream 6045.

Obviously the street price is lower and therefore the cost efficiency will still be slightly higher. 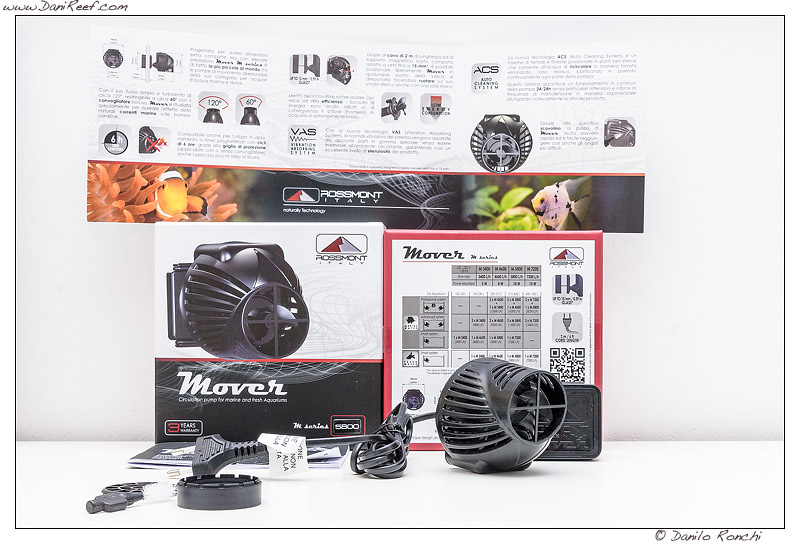 Above you can see the contents of the package, the pump, the magnet, the conveyor flow, the cleaning brush, the grille, the beautiful box with the fold with the main features and a use and maintenance booklet. An endowment virtually complete, that looks great. 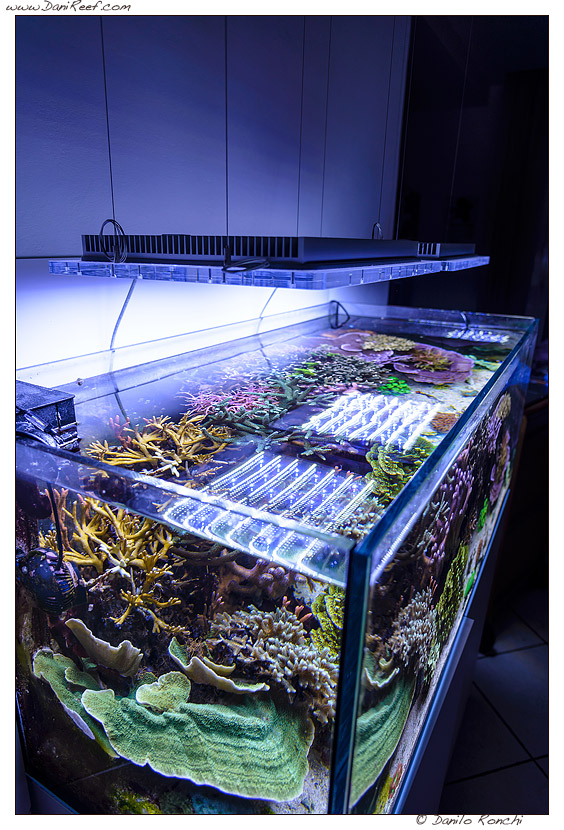 The Rossmont suggests its use in saltwater aquariums between 230 and 310 liters in the case of a single pump Mover M 5800 or for aquariums up to between 310 and 400 liters for use in tandem with another identical pump .

In my opinion a couple of Rossmont Mover M 5800 are sufficient for an aquarium of about 250-300 liters of SPS, using them alternating. Thereby obtaining a fixed flow rate of approximately 20 times the volume of the aquarium.

I have inserted in my marine aquarium together with other 3 pumps tunze Turbelle 6095 , held more or less at 60% of their output, thus obtaining from the four pumps approximately the same .

The Rossmont Italy Mover M 5800 pump has been used in my tank for about 4 months, used on an ongoing basis, that has never been turned off except for maintenance. A time then definitely enough to discover latent defects or malfunctions . 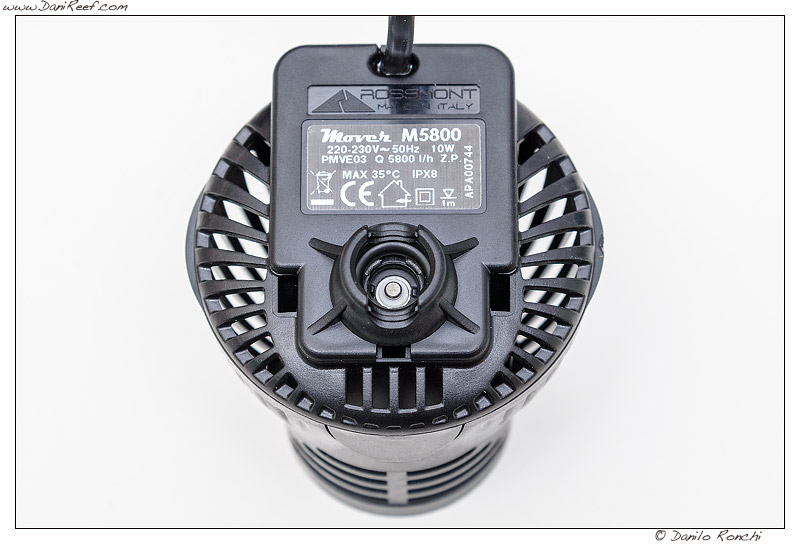 The outer body is like a semi-cylinder extruded from a sphere in such a way that it can be adapted to any situation possible thanks to the magnet supplied. The flow leaves the pump through a cross head not removable placed in front of the impeller, which has roughly the same size of the rotor itself, while the water intake is placed anywhere behind the grille, making it much harder the clogging of the pump. Since a few years the magnet is the standard method of attachment to the glass, and the Rossmont has made no exception. 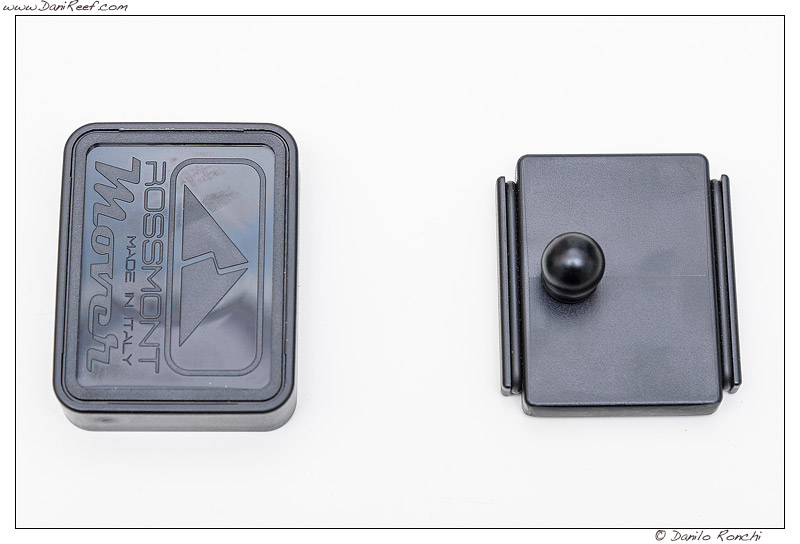 I can testify as supplied magnets are extremely powerful, easy to insert, and very easy to maneuver in the water. In addition, the magnets are equipped with a small rubber gasket which does not spoil the glass as can be better appreciated in the next picture: 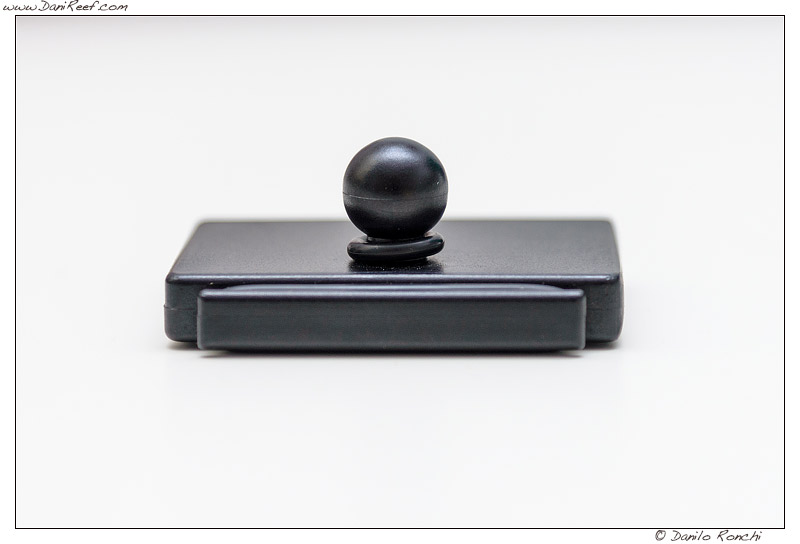 The method of coupling chosen probably has the disadvantage of more protruding pump than tunze’s method, for example, but it is definitely more stable thanks to the pin that fits inside the cap placed behind the pump body. The magnet kit is enough to put the pump Rossmont Italy Mover M 5800 in tanks which have glass thickness up to 15 mm, in truth, I guess that we might use them for a thickness of 16 mm, as the grip I felt on the glass is fairly clear and safe. From 15 mm down you will not have any problem.

The Rossmont has equipped its Mover pumps with the so called VAS, Vibration Absorbing System, a system of vibration absorption that should quiet the pump.

Normally we perform a measurement on the noise of the pump but in this case it was not completed because the pump is absolutely silent, we do not know whether or not due to the VAS, but nevertheless there are no noises resonance, and then the measurement was been totally useless.

The pump in our possession proved to be absolutely inaudible. The detection of the power consumption is more complicated and is shown only as a curiosity.

In order to measure the consumption I am equipped with a clamp meter that measured a current of 0.066 A. Unfortunately it was not possible to detect the power factor.

The calculation of power consumption and therefore the power is as follows, assuming the power factor ugual to one:

Since Rossmont declared a power consumption of 10 W, the estimated PF should be equal to 0.69, a value quite lawful for a pump.

Assuming a power consumption of 10 watts, and an energy cost of 0.26 euro per kwh (in Italy), we could use this pump continuously for an entire year with a consumption of 87.6 kWh, which would be the same even considering a pair of Mover M 5800, using each alternately for 6 hours, which gives rise to a cost of 22.8 € per year, or 1.9 € per month. 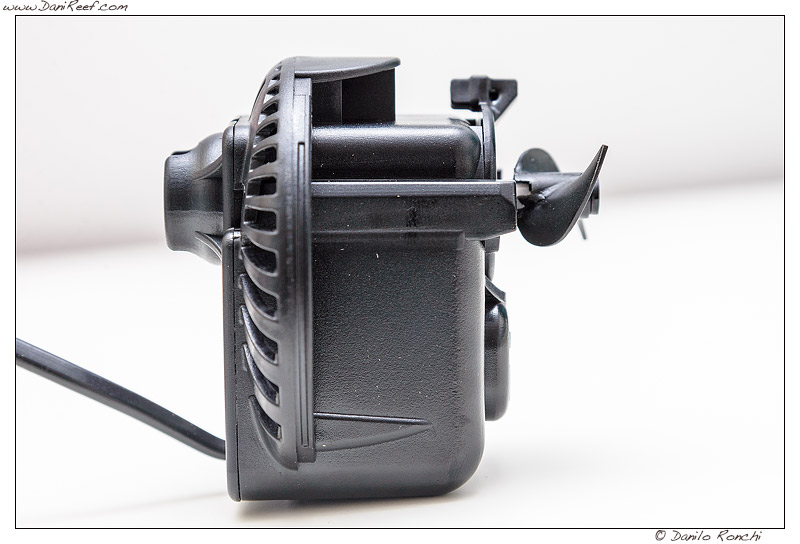 The impeller has a fantastic method of unlocking, just unlock a lever and you find the impeller in your hands. Simple and safe. 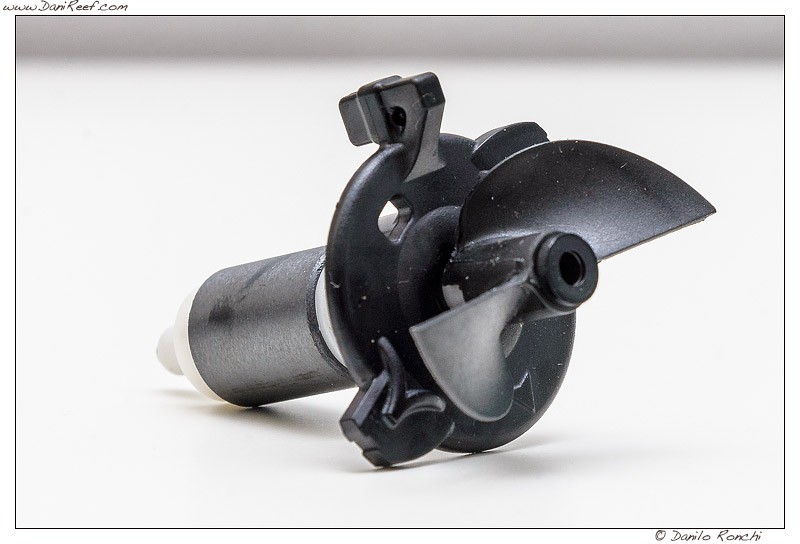 In fact, as you can see from the picture, the blocking of the impeller incorporates the release mechanism that is integral with the impeller itself.

The pump flow is large enough, in my opinion optimal for almost all marine aquariums. In any case the Rossmont series also provides a flow angle reducer, they call “concentrator nozzle“, which leads to a water flow more concentrated and therefore more long. 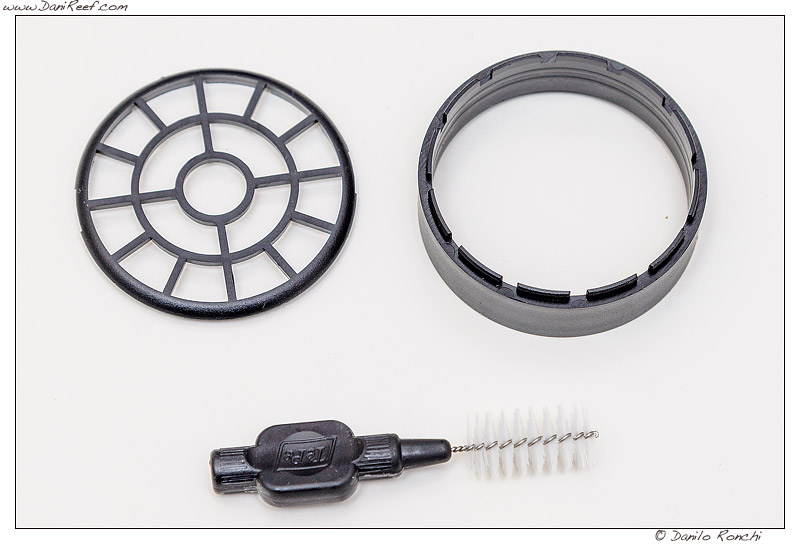 In the last picture we can appreciate the concentrator nozzle, on the right and the protection grid on the left, in addition to the cleaning brush.

Normally, the exit angle of water is equal to 120 degrees, mounting the concentrator nozzle you arrive at an angle of about 60 degrees, and then much more concentrated. As I said I prefer to keep it wider and sweet, and I advise everyone to do the same. But the fact of being able to change this status will greatly increase the versatility of the pump, especially on the basis of owned corals and aquarium morphology. 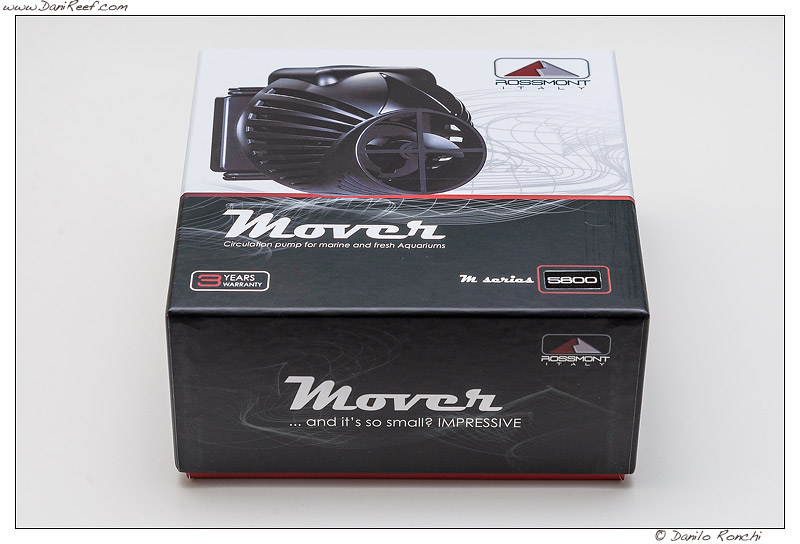 The protection grid instead applies to the pump to decrease the likelihood that a fish may slip inside the pump body and can come into contact with the impeller. Obviously, it becomes useless if the pump is kept constantly on, as it becomes useful, vice versa, if you use a timer and then there are moments of prolonged inactivity. In this case, in fact, small fish and crustaceans could slip into the pump body and come inexorably smoothie to the resumption of the impeller.

Since the grid slightly lowers the flow rate, however little it may affect, I prefer not to mount it, but I also keep the pump constantly on, then you evaluate according to whether you keep the pump always on or not. The grille can be fitted either with or without concentrator nozzle, thus leaving the ease and versatility of use.

The pump has no external power supply.

The pump Rossmont Italy Mover M 5800 has favorably impressed us. Both for the numbers given, an efficiency of 580 liters per watt and 55 liters per euro, both for his behavior in the aquarium that for the 3-year warranty. We were impressed at the show when we first seen it and we were right there. Truly a great pump.

From the beautiful packaging, nothing has been left to chance, and despite not being an electronic pump is very versatile thanks to the concentrator nozzle that allows its use in different contexts. 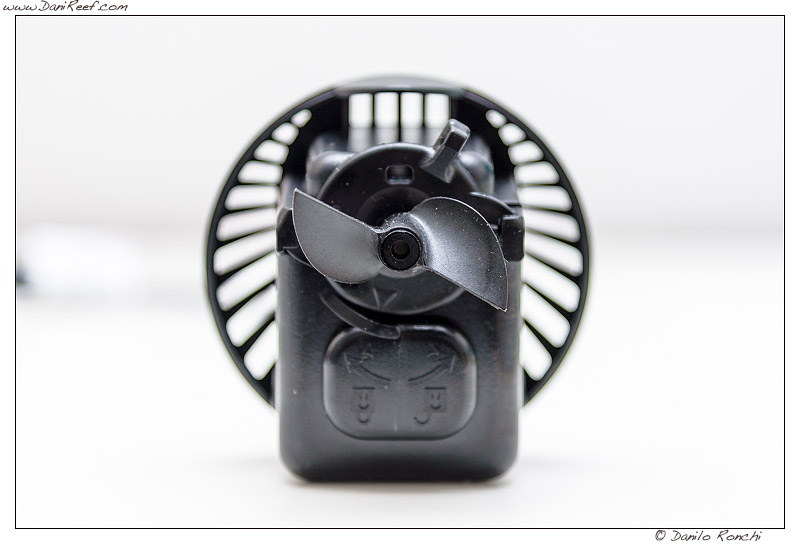 The only slight problem we found was caused by a noise that was clearly evident after about 2 months of continued use and no maintenance of any kind. After two months of use and no cleaning, the accumulated dirt did go to resonance of coverage shell of the pump which then vibrated. It needed only cleaning the pump to totally eliminate the problem. However, this also shows how good the ACS system – Auto Cleaning System, which has kept the pump in perfect working order without any maintenance. However, I would advise you to clean your pump at least once every 15 days, do not act like me, I had a different goal than lasting the pump indefinitely. 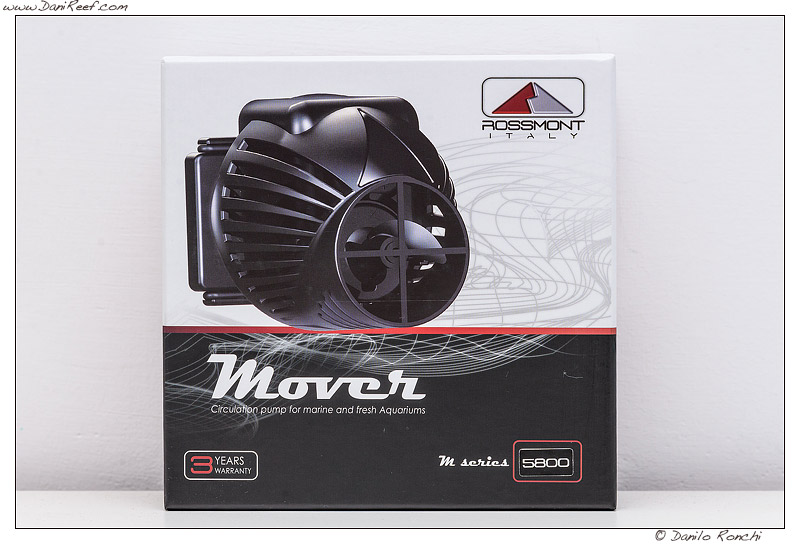 From the point of view of performance we have not really fault anything. Quiet, powerful, sweet, thanks to a wide and well distributed flow. If the capacity did for you, these are the pumps you can rely on and you have to insert in the shortlisted of contenders on which to base your choice.

Starting with a tiny footprint in aquarium and adding really low noise and optimal flow, the only problem is just to accept a cost that is not exactly cheap, amounting to EUR 114.90 VAT included in Italy or USD 139,90 in U.S.A., also if amply justified by the design features, performance, accessories supplied, construction carried out in Italy and the three-year warranty.

We thank the company Rossmont Italy for having made available the pump Rossmont Mover M 5800 for the purpose of this review.