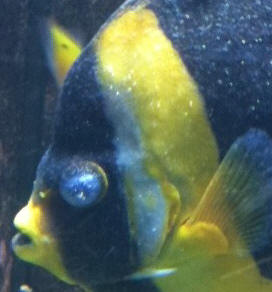 There are a variety of parasites that effect marine fish, but often aquarists are stricken with one of the two most common. Cryptocaryon irritans (marine ich) and Amyloodinium ocellatum (marine velvet) are both parasites that uncommonly kill wild marine fish, but can wreak havoc on captive systems. I would like to address the latter parasite, as it often causes quick mortality of fish and is tough to diagnose. When it appears on the skin of marine fish it can easily be misidentified, appearing similar to marine ich. Treatment for this parasite presents an unwelcome challenge for marine aquarists, first because it often strikes with no outward signs of infection and second because it’s seemingly impervious to hypo-salinity.

Various studies have been conducted on Amyloodinium, mainly for the culture of food fish, specifically red drum and striped bass. The life cycle of the parasite is very similar to that of marine ich, meaning that it requires a fish host to survive and procreate. Once the parasite has embedded onto fish tissue, protected by the fish’s natural slime coat, it begins feeding off bodily fluids, dropping off within 7-10 days, falling into the substrate and reproducing up to 256 copies of itself. Like marine ich, encysted parasites are immune to any medication, with the only treatable part of the parasite’s life cycle being the free swimming stage.

Amyloodinium is impervious to hypo-salinity and has been recorded in salinities down to 3 ppt, much lower than most marine fish can tolerate. Its fast life cycle leads to massive infestation of fish in the marine aquarium, once the life cycle has begun. It’s not uncommon for aquarists to start seeing loss of fish life within 12 hours of the parasite’s first symptoms. This parasite is perhaps both the deadliest and hardiest parasite that marine aquarists will encounter.

Instead of re-iterate information second hand, I want to provide an outline for diagnosing and treating this parasite, based off personal experience. I recently had an outbreak of Amyloodinium over two aquariums on one central system: a 220 gallon along with a 150 gallon cube. Luckily I had the equipment on-hand to make an accurate diagnosis via microscopic evaluation of a gill biopsy. Like most marine fish parasites, there is more misinformation surrounding Amyloodinium than accurate, research based information, so I will provide a two reliable links at the bottom of this article.

I first noticed signs of the parasite when a black tang quit feeding, remaining isolated at the bottom of the within some rockwork. I calculated the fish’s respiration rate at 120 breathes per minute, which is about 40 times higher than normal respiration. The fish showed no signs of outward parasitic infection. I removed the fish, offering it a freshwater bath (15 min) and secondary bath of Seachem Para Guard. After the bath, I placed the fish in a hospital tank and administered copper treatment. By the next morning the black tang was dead. I took a gill biopsy and put it under the microscope, noticing the tell-tale spots among the gill tissue indicating Amyloodinium infection.

This gets us to the first part of dealing with this parasite, diagnosis. You need to know your fish, their habits, activity rates, etc. I would recommend that any marine aquarist have a baseline average for each fish’s respiration rate. This is easy to do, set a stopwatch for one minute and count how many times the gill moves during that time. Make note of it. If any of your fish show an increase in respiration, for no apparent reason (i.e. being chased by a tank mate) this could signal an Amyloodinium infection. The parasite has the nasty habit of infecting gill tissue first, often killing fish before the aquarist even realized anything was wrong. If a fish is not eating, listless and respiring quickly, then it’s best to assume it’s infected with Amyloodinium. As the infection progresses often fish flesh will appear hazy, or velvety (hence the parasite’s common name). Under the microscope it’s easy to see why, as thousands of tiny parasites are attached to the flesh. It’s not nearly as apparent as ich, which leaves easily spotted sugar like spots. In Amyloodinium infections, the flesh appears like it was rolled in flour. Using a flashlight and shining light down from above, normally you can spot individual cysts lining the fish’s skin. For an unskilled aquarist, this disease is terribly difficult to diagnose.

To give you an idea of how fast this parasite moves, in the course of one day I lost one fish, diagnosed the parasite and already had another fish (an Achilles/goldrim hybrid) respiring quickly. The mistake I made, and one that I don’t suggest others make, was acting too slowly with the wrong medication. Since both infected aquariums are fish only tanks, I attempted treating the parasite with Seachem Para Guard since it’s not as adverse to fish as copper treatment. It was entirely ineffective in treating this parasite. My assumption is that the mechanism under which Para Guard acts (using a medicinal dye to kill parasitic life forms) is simply too slow to interrupt Amyloodinium’s life cycle. 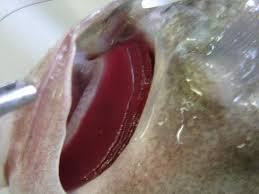 Treatment (whether in a hospital tank, display tank or otherwise) should be swift and far reaching. Since it’s likely the aquarist will be unsure exactly what parasite they are dealing with, assume it’s Amyloodinium. A good start is administering freshwater baths to all fish exposed to the parasite. This does very little to encrusted parasites on the skim, protected by slime coats, but can remove parasites from gill tissue. After a freshwater bath, often the aquarist will find tiny spores floating along the container bottom. These are perfect for microscopic analysis of the parasite.

There is conflicting information regarding temperature’s role in Amyloodinium’s life cycle. Some literature suggests it makes zero difference, others suggest it speeds the life cycle up and a few claim the warmer temperature allows the parasite to thrive. In my experience as an aquarist, warmer temperatures speed up the life cycle of ecto-parasites. This may be a result of speeding up physiological processes within fish, or a direct result on parasite physiology, but I do recommend a temperature increase when treating Amyloodinium. I increase temperature to 86 degrees, under which conditions major tissue infestation was gone in under three days.

Copper is the weapon of choice in Amyloodinium infections. The links I provide will detail other treatments, but most are either too hard to acquire, or simply unsuitable for most marine aquarists. Others would require enhanced testing, and should only be administered by a veterinarian, as they have the ability to cause more harm than good, permanently damaging the ecological balance of your tank. I suggest and use Seachem’s Cuprimine, which is a chelated copper. This means the copper is bound to another ion, making it more stable in seawater, but also meaning that more copper will be needed to reach the desired saturation. I treat at a dosage of .7 mg/l. This is higher than recommended doses of .5 mg/l and is unadvisable if you have fish species sensitive to copper. Reality is, if a species is copper sensitive, than using copper in any regard will likely have fatal consequences. Also remember that chelated copper will require a special absorption media to remove from the water column at treatment’s end. Carbon will partially remove it, but using something along the lines of Copper-sorb will be more effective.

There is conflicting evidence on the value of lowering light levels while treating an infection. Some literature suggests it may impede the parasites ability to find a host. Others suggest it does nothing. Reduced light levels does aid in helping keep fish calm and reducing stress. I suggest doing it, while treating the first stages of infection. During this time, use a flashlight to gauge the treatments progress at killing the parasite.

To make things easy, I’ve developed a quick checklist for diagnosis and treatment:

The reality when dealing with this parasite is that it’s highly likely you will lose some livestock. A quick plan of appropriate action can help lessen the blow and allow the remaining fish to heal appropriately. 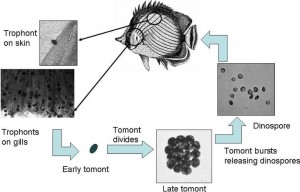 The outbreak of Amyloodinium I am still treating for, occurred during a period where no fish were added to the tank (last fish added over 6 months ago), and no significant change in water quality was reported. This means that the parasite was either dormant in the substrate or imbedded on fish tissue with no outward signs of infection. Either or could be the case, and it’s important to understand that research has shown that some fish develop an interesting immune response to Amyloodinium. The parasite will embed and begin feeding, but the fish’s body produces something that nullifies the parasite. This means that even if all fish are removed from the display for an extended period of time, there is still a chance of parasitic reoccurrence. Quarantine and prevention, as always, is the best medicine, but even under the best circumstances, it’s not uncommon to come face to face with this common parasite. In wide spread aqua culture, Amyloodinium has been a serious threat to fisheries, and even with modern day technology proves difficult to entirely prevent or eradicate. An infestation of Amyloodinium doesn’t signal poor husbandry practices and many forum users like to believe, just an unfortunate scenario that will test your skills as an aquarist.