Salvaging the Wreckage: A future for our industry 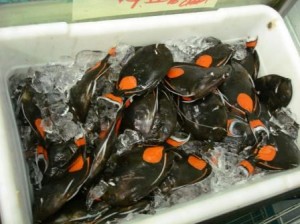 We all want healthy fish, and we don’t want to have to take out a second mortgage to get them. Often, I talk with aquarists who are wondering, what is the deal? Sometimes, it seems like pulling teeth, to get parasite free, healthy marine fish, at a fair cost. Most consumers don’t understand the complex details of the marine fish trade. Right now, we are hearing a lot about NOAA, legislation, and even banter that links the reef aquarium industry to reef degradation. What does it mean for our hobby? Will the price of marine livestock rise, making it unaffordable to many aquarists? Will it become illegal to buy or keep certain coral or fish species? Is the combined force of anti-aquarium conservation movements, pending NOAA restrictions, and the belief that reef aquariums are destroying the environment, the end of home reef aquariums?

Many of these topics have been debated since before the early 1990s, as marine aquarium technology became better, and more and more people were keeping reef tanks. Suddenly, what was once a tiny industry, was becoming something much larger. Companies that made lighting for horticulture were suddenly producing reef aquarium lights, and by 2000 the reef aquarium world was buzzing, and it’s continued to grow ever since. Answers to some of the questions above begin in understanding where many of our aquarium fish come from. 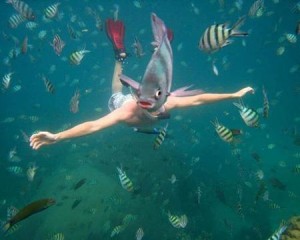 Island nations across the globe, with access to exotic reef fish, are often poor and opportunity is scarce. Often islanders resorted to capturing food fish for the seafood industry, or blasting the reef to bits for the limestone industry, to put food on their tables. The islanders cared little about the ecological gem that surrounded them, as they needed money to live. When the reef aquarium industry moved in, and a demand for healthy, live marine fish began, devastation had already been done, by islander’s previous attempts to earn a living. Using reefs as a source of raw building materials was especially devastating, as large tracts of reef were demolished, salvaging the blown up bits for things like road construction. The reef aquarium industry wanted exotic fish, alive, and lots of them. Islanders wanted to make money quickly. From this very imperfect union, things like cyanide collection were born. Lots of fish could be captured, by simply stunning them with cyanide. In time, we learned that those fish were doomed, and the internal damage cyanide caused eventually killed them, further down the line. To make matters worse, the cyanide killed the surrounding reefs.

Dead fish and dead reefs proved bad for business, especially as exotic corals started becoming popular. In the mid to late 90s, through early 2000s, the Marine Aquarium Council (MAC) rose up, demanding that marine fish collection was a vast ecological need, and offered training to islanders, which taught sustainable collection, and reef preservation. Suddenly, it appeared as islanders had the best of both worlds, a reason to foster healthy reefs, and a source of viable income. Somewhere in its history, the MAC mutated into a money hungry monster. It aimed to make MAC certified fish far more desirable than uncertified fish. Yet, many exporters, importers, collectors, etc – who were doing things right, weren’t granted MAC certified status. On the flipside, those who were doing things wrong, but paid to play, were granted MAC status. It was a mess, and suddenly all the money MAC was making appeared to be going more to creating a funnel of dollars to an organization, and not to implementing education of island nation collectors, or checking on up on the effect collection had on reef ecosystems. In time, the industry caught on, and MAC fizzled out. 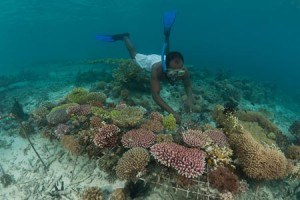 To recap so far, islanders once earned a living destroying reefs for raw materials and food fish. They got the option to capture marine fish for our aquariums, but used terrible means to do so, eventually they started realizing this didn’t work, and a council formed to train collectors and protect reefs, that council turned out to be a money making sham, and dissolved with no real long term effect.

Right now, a lot is going on. In some island nations, it’s become more profitable to work for the seafood industry and harvest building materials from the reef. In others, islanders (often with the help of reef vendors) have made a commitment to harvest healthy marine livestock. Other nations still offer marine livestock, but their collection methods are highly questionable. The list of captive raised species continues to grow, but still doesn’t have traction.

Captive breeding is the best possible future for aquarists, as it offers domestically raised livestock that hasn’t been exposed to many pathogens. It hasn’t gained grip, for many reasons. One, the list of captive bred livestock is low. Clownfish for example, have a semi-popular captive breeding/sales program. Oddly enough, designer clownfish have gained popularity. For clownfish purists, who years ago were looking for perfect natural morphs, many clownfish we cherish today would have been culled due to irregularity. Reality is, captive breeding any marine fish takes time, and incurs expense. It seems odd that you can ship a species across the globe, and it sells for a cheaper price than one raised domestically. Though, you have to remember, breeding fish is a major investment, and requires lots of trial and error. Furthermore, breeding many species is still very experimental, and fish with a long larval stage when first born, are nearly impossible for even hardcore scientists to propagate. To make matters more difficult, some wholesalers only sell wild caught fish, since they seek a diversity of species offered and must maintain a good flow of business with their collectors. 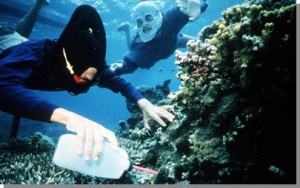 The question has arisen today, are captive bred fish good or bad for wild reef conservation. Islanders need to eat, and if suddenly they were no longer tasked to collect marine livestock for money, would they turn back to blasting their reefs for building materials, or killing fish for the seafood industry? The answer is yes they would, not because they are bad people, but because no other economic opportunities exist in their part of the world.

To make things very confusing, enter conservationists like Snorkel Bob and Sea Shepherd, who are telling the public that our hobby is destroying the ocean. It’s true, for every live fish in our aquariums, there are ones that didn’t make it. Like a RODI unit that wastes 4 gallons of water to create 1, the current state of the industry creates a lot of dead fish. Think about the process, collection from the ocean, housing at an overcrowded exporter, shipping across the world, and housing in an overcrowded wholesaler, shipping to a retailer and finally arriving in your aquarium. It’s a wonder any marine animals survive that. Conservationists feel nothing should be taken from the oceans, and the reef aquarium industry is too far gone, to ever be saved. So toss in a regulatory agency, like NOAA, which has identified the industry as a culprit in reef decline, and said 20 species of corals you keep and collect, are now threatened species illegal to own.

You have one big mess. The state of the reef aquarium industry today, is entirely incomplete. In many ways, the MAC needed to succeed. They needed to apply their stamp to those doing the right thing, not be as driven by pay to play, and put their dollars into education programs for collectors, retailers and hobbyists. Greed took over, and MAC saw the chance to become the governing body of the entire reef aquarium industry, and that was dictated by dollars. There is no cohesive movement, which entails cooperation between collectors, and those that import marine livestock to be sold in industrialized nations, like Europe and North America. It’s all sporadic with pockets of good ones here, bad ones there and everything in between. Many, are just seeking quick financial compensation, others see the long term impact. 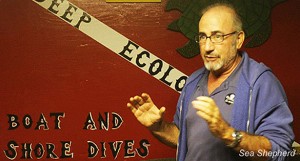 To begin repairing this mess, and trimming the fat, the industry must focus on its foundation, the collectors. First, we need a body from within the industry that educates collectors. Guidelines need set, that strike a balance between caring for and fostering healthy reef ecosystems, and providing education on how to collect and supply healthy animals. Collectors need financial commitment to help establish facilities where marine fish can be properly quarantined and cared for, before being shipped away from their home. This costs money, and the price of marine fish will inevitably rise. Collectors need to be paid a living wage, for their area of the world. If marine livestock collection isn’t paying the bills, then it’s likely collectors will turn to ecologically devastating means to make up the difference. If we expect collectors to be educated, trained and capable of offering precise care to marine animals, they have to be paid enough to make it a worthwhile pursuit. This again costs money, further raising the price of marine livestock.

Wholesalers need to take responsibility for what they are getting. All marine wholesalers should have an active role in training and cooperating with their collectors, and they should be willing to work with only one or two collectors, with whom they’ve dedicated time and resources. Yes, this may mean that certain wholesalers may only sell fish collected from perhaps the Indo Pacific or Indian Ocean, but other wholesalers can invest in other areas of the world, maintaining species diversity in the market.

Retailers need to be active in offering healthy livestock, even if that commitment means higher prices. If the line from collector to retailer was shorter, and retailers were offered the ability to work with the wholesaler in generating programs like I’ve suggested, this could get better. If instead of a row of boxes from three or four different wholesalers, full of DOA livestock, became a few boxes from one wholesaler with whom you closely work, full of live healthy fish, the tradeoff would be good enough to entice cooperation from retailers.

This would be only a beginning, and would spread out to make the individual aquarist a part of this cohesive whole, through education, input, and allowing them to participate and contribute however they would like. The end result would mean marine fish cost more, this is inevitable. The days of $ 15.00 damselfish and $ 60.00 tangs would be over. Though, a balance between cost and demand, for captive raised vs. wild caught specimens could be created. Collectors are paid well enough, with enough demand to continue collecting, while captive raised livestock is also embraced, and the price gap between the two becomes narrow.

As for the future of the hobby, it depends on change. We must first understand that marine livestock is a highly valuable natural resource that deserves our utmost respect, and second that islanders in remote regions of the world need a viable source of income, to entice them not to damage their ecological heritage. If we don’t do better, a legislative arm like NOAA will simply ban each species we seek to keep, and the whole thing will be lost.