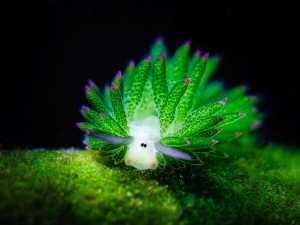 This is, without a doubt, one of the most adorable sea creatures I have ever seen – and it’s a slug! The tiny creature looks like a cartoon or maybe a Wallace and Gromit character, but it is most certainly real. Costasiella kuroshimae (or ‘Leaf Sheep’ for short) is found in saltwater environments near Indonesia, Japan, and the Philippines, and can grow up to 5mm in length. And, like the mammal it gets its name from, it likes its greens. The Leaf Sheep eats algae, and is one of the only animals in the world that is able to photosynthesize. And while it is not very efficient at it, some species can live for months on photosynthesis alone. As it eats, it partially digests the algae, but leaves the chloroplasts intact, incorporating them into its own body, and storing them in its multiple spiky appendages. The cute little slug then uses the chloroplasts to manufacture energy. The process is called kleptoplasty,a term derived from the Greek word Kleptes (κλέπτης), which means “thief”. and can only be found in certain sacoglossan sea slugs…like this little guy.

Enjoy this short clip of the Leaf Sheep in its native habitat, running free on what appears to be a great plain, but is actually a very small leaf: