The second steps to healthy fish … 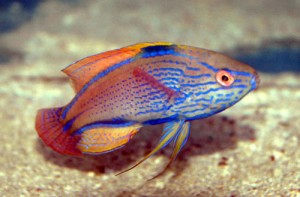 Last time, I went over what some may call a reverse acclimation. A process in which the QT tank is transformed to match a new arrival’s bag water, rather than bag water matching the QT tank. The thought behind this is simple, a fish bag is a disposable habitat, only meant to bring your new aquatic charge from point A to B. The QT tank will be the species home for some time to come, and allows you to slowly and appropriately make changes. So let’s pick up, right where we left off. You’ve gotten your QT tank water to match your species shipping bag, and the fish is now released into the QT tank. Likely your water temperature is 75 degrees or slightly below, and your salinity is in the 1.020-1.021 range. PH has been adjusted to match the shipping bag, and let’s assume it’s around 7.8.

The first course of action, is to slowly raise the temperature. Tropical temperatures are important in marine fish, and using a properly sized heater, adjust the thermostat and slowly let the water work its way up to 78. After 24 hours in either darkness or greatly subdued lighting, it’s time to make some of those important decisions life is full of. I prefer to QT new arrivals at hypo-salinity (down around 1.009). This serves two purposes, one it kills off a variety of potentially present parasites, and two, it reduces stress (wasted energy) by aiding in osmoregulation. Before starting the slow trek down to 1.009, I recommend offering some frozen food. After a good 24 hours in low light, with water temperatures at tropical levels, it’s likely your new species will accept food. If they don’t, it’s no reason to be discouraged, as each individual species varies in how quickly they adjust to a new environment.

Begin the drop down, slowly diluting marine water with fresh. Let PH naturally drop, and don’t plan on the use of any buffers until you reach your desired hypo-salinity, and see where PH has settled out. I usually spend two evenings adjusting to hypo, hour by hour adding more freshwater and closely monitoring salinity with a refractometer. Once there, it’s best to let the water stabilize over 24 hours, and then test PH and make any needed adjustments, bringing it up to 8.0-8.2. It’s vital to monitor the physiological response of your new fish. If they begin breathing heavy, showing dark stress colors, or acting listless, stop the drop and give it a good few hours. If they don’t recover within 8-10 hours, it’s possible the hypo conditions are overly stressing them, and not having the intended effect. Abandon a hypo-QT, and re-adjust salinity up, until your species appears content. 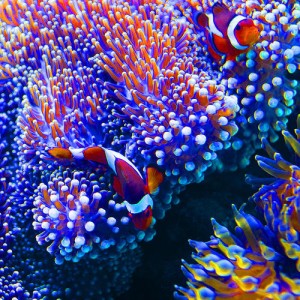 Some species feed during the drop down to hypo, some do not. It’s worth offering food, and if you are using a bare bottom tank, uneaten food is easily syphoned out as you replace marine water with fresh.

Once everything is stable, QT serves as a time, over the course of one month or more, to prepare your new animal for captive life. Believe it or not, parasites and bacterial infections are not the main cause of new arrival deaths, other fish are. Fish exist as a working model of survival of the fittest. In wild aquatic ecosystems, optimistic predators like sharks and others, serve as population control, weeding out the slower, weaker, less agile members of species hierarchies, and pushing mother nature to grow stronger, better and faster. The chain of command in a marine aquarium works in a very similar way, with more dominant species weeding out those which are weak and stressed, pushing them to death if they are overly diminished. You’re preparing this new fish to enter an ecosystem with an established hierarchy, get beat around a bit, and carve out their own place within it. It’s no small task.

To achieve this, nutrition is key, as is providing an environment in which the fish feels comfortable. Let the hypo-salinity do the work of ridding your fish of parasites, and you concentrate on enriched frozen foods, full of amino acids and vitamins. At the end of QT, a fish ready for the display tank is fat, happy and strong. Take into account that your fish could be healing from tissue damage incurred during capture, shipping, etc. Herbivorous species, such as surgeonfish, require supplementation with seaweed, and often won’t accept algae from a clip right out of the gate. Using a rubber band, you can affix algae sheets to rock or décor in the QT tank, which recreates a natural grazing environment, and can coax a new arrival to eat. 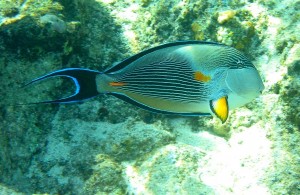 If during QT you find your fish struggling to overcome an ectoparasite, there are a few options. Hypo-salinity does not kill every parasite in the book, with ich being the most highly eradicated by osmotic pressure during hypo salinity. Marine velvet is notorious for surviving hypo salinity, so if spots appear that don’t diminish, I recommend pairing hypo saline conditions with Seachem’s Para Guard. This is safe, when done as directed, and I’ve found para guard to be far more effective when used in hypo saline water. If you opt for para guard treatment, it’s important to turn off UV sterilizers, carbon reactors and protein skimmers, as all degrade the medication. Para guard is a three part treatment, a dye actually kills free swimming parasites, while a polymer coats fish tissue like an underwater bandage, and an antiseptic heals wounds and kills bacteria. UV, carbon or skimming, remove one part of the medication, rendering it partially useless. When using para guard, DO NOT pair it with Seachem’s Stress Guard. Stress Guard is a watered down version of the same product, and it can cause an overdose when the two are used in conjunction. Ask me how I know that.

After 30 days of hypo salinity, superior nutrition and stress free environment, your new fish should be looking pretty damn good. If they’re not, regroup and try to find out what is going wrong. It’s time to raise the salinity to match your display, giving the specimen at least 7 days of observation, before adding it to the display. All too often, I watch aquarists run a 30 day QT in hypo salinity, net out their new fish, acclimate it to the display tank, release it, only to find it covered in parasites within days. The culprit is often a dormant parasite that has remained encrusted during hypo saline treatment, and has managed to make its way to the display. Typically if anything nasty remains in QT, within 7 days of normal salinity, it will rear its head, at which point you can use the treatment of your choice to kill it.

It’s not as simple as grabbing your net, and scooping up your fully quarantined fish. Your display tank is an ecosystem full of animals, all of whom have a slice of that tank as their territory. Depending on the tank size and fish population, it’s likely all the territories to be had, have been taken. In this scenario, the only option is to break up the established territories. The best way to do this, is either a change of aqua scape, which relocates large fortifications, rebuilding them elsewhere, or by adding more live rock or décor. Do this mindfully, paying close attention to what species you have. Species such as clownfish, or damselfish, usually stake out a small patch of reef and defend it. Species such as surgeonfish or large angels, stake out a whole area of tank, and in some cases an entire length of tank, and patrol it for intruders. Dwarf angels like to hop around from crevice to crevice, picking at the rocks. Ambush predators simply lie in weight, ignoring anything that they cannot eat, while wrasses often cruise during the day, but rest within the sand bed at night. If your tank is home to a lot of clownfish, create a lot of surface area with rock or décor, giving each clownfish pair an area for a “nest.” If you have a lot of cruising patrollers, break up the reef into separate segments, giving the small fish a place to settle en masse, persuading the patrollers from bothering them, while not taking up open water space.

When the QT tank’s water parameters match your display tanks, and your new tenant has properly adjusted to those, you can make the move. Drop lighting for 24 hours, and allow your new fish entry into the display. For now, just watch and wait, making notes of any signs of aggression. Be prepared to act if you find that one species is simply harassing the new animal so much, that it’s unlikely they will survive. No matter how confident you are that all will remain peaceful, it’s not uncommon for the most unlikely candidate simply not accept a new species into the established display tank. If you’re adding a new wrasse, be extra mindful, as many species seem to use wrasses as punching bags.