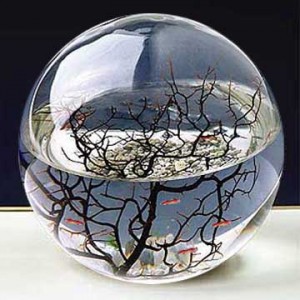 I have a bio-sphere, a small glass orb that I purchased from Amazon. Within it, there is a bio-pellet substrate bottom, marine water, a tiny clump of macro-algae and seven tiny marine shrimp. The entire ball is totally sealed, and the minute ecosystem within is said to last a minimum of two-years. The instructions for caring for the bio-sphere are minimal. Keep it out of constant direct light, but provide enough light for algae to grow, and keep it at room temperature. It’s fascinating to me, that within the nearly 12 months I’ve owned the bio-sphere, nothing within has changed. The tiny shrimp are thriving, the patch of algae remains the same size, and day after day it’s business as usual in the tiny sphere, which rests on a shelf in my living room. I could go throw the host of complex interactions taking place within the little sphere, that allow it to remain sealed from the outside world and still flourish. Then I could write and write how these same systems apply to the health of our aquariums. In reality it boils down to one thing, the food chain.

We all know the basics of a food chain. Often though, we don’t apply knowledge of marine food chains to our aquariums. These systems complete an entire cycle of waste assimilation and animal nutrition. They are vital to every ecosystem on Earth, including the one within your aquarium.

The role of microbes: 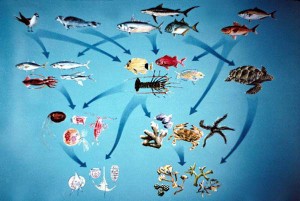 Within each drop of your aquarium’s water, bacteria and plankton exists that form the base of your tank’s food chain. The oxygen and biomass they are creating are the heartbeat of your tank’s ability to sustain marine life. Algae and phytoplankton take in sunlight, carbon and other nutrients, creating oxygen and food for other organisms. Microbes at the other end of this spectrum are breaking down fish and animal waste, even decomposing dead animals, turning them into nutrients that can then be re-used by phytoplankton. It’s the very basic foundation on which your water’s quality is built.

Marine microbes mark the beginning and end of the food chain. They generate nutrients for all life at the beginning, and break down decomposing and decaying matter to be re-used at the end. It is estimated that the mass of all the microbes in the world’s oceans is about the weight of 240 billion African Elephants. It’s safe to say, depending on your aquarium’s size, that the biomass within your tank is quite considerable. 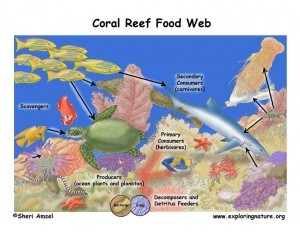 We decide an animal’s trophic level, based on how many steps away it is from a primary producer. To help understand just what trophic level each of the animals within our aquariums represents, look over the following.

Human beings like to picture ourselves at the food chain’s top, which depending on how you look at it is incorrect. Since eventually we all will be fertilizing daisies someday, bacteria, fungus and other minute organisms may have us beat.

Role in our aquariums: 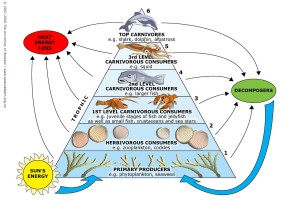 Now this description is based loosely and broadly on oceanic food chains. To create an accurate picture of a reef aquarium’s food chain, you must look at its inhabitants. By doing this, we can create a picture of our aquatic ecosystem and make informed decisions on how to enhance it. It also helps us to realize that to enhance it we may need to remove organisms, or change the type of organisms we are keeping. A food chain (and thus ecosystem) functions best when it’s in balance. Too much of one type of organism and too little of another, throws things off kilter and can potentially give an unwanted organism an advantage to thrive.

I will use my own 120 gallon reef tank as an example. 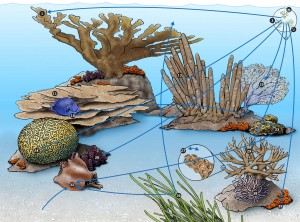 By creating a food chain breakdown of your reef tank, you can guide yourself in making stocking decisions, or deciding if you have too much of one animal. Perhaps an aquarium is overstocked with secondary consumers, or lacks a good population of primary consumers. There should be balance along the entire area, paying careful attention to how you are cultivating and maintaining microbes in your tank. Any aquarium that relies solely on live rock, as a way to cultivate a population of microbes, may want to consider methods that focus solely on microbe populations: zeolite, bio-pellets, refugiums, etc.