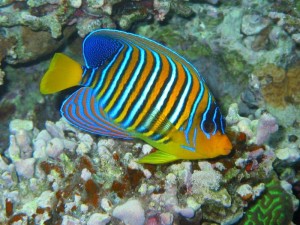 Getting healthy marine livestock, is one of the greatest challenges we face as aquarists. To a point, it’s not really the fault of anything but distance, which makes acclimating new acquisitions so difficult. Often, our aquariums are located thousands of miles from a specie’s natural home. Sometimes, when I consider the journey my aquarium residents have taken, it’s shocking that they even made it here alive. Even the closest coral reef, for those of us on the north east coast, is far south, stretching from West Palm Beach Florida, down to the Florida Keys. For people who live smack dab in the center of the United States, it’s much farther. When you consider that most of the species we seek out, come from tiny islands in the remote South Pacific, or Indian Ocean, you can understand why aquarium fish arrive to us, in such a stressed out state.

Traveling is stressful, even on human beings. For fish, who are suddenly plucked from a rich, diverse habitat, and tossed into a tiny container, trekking thousands of miles across the planet, it’s a total change of lifestyle, within a matter of seconds. Instead of try to offer pointers on how to spot a good livestock vendors, (which requires a post of its own) I’d rather point out some often overlooked realities about marine fish, that can help us ease some of that stress, making the transition to a captive life a bit smoother.

New arrivals need to be quarantined, it’s a basic premise of being a successful aquarist. During transit, specimens have been exposed to pathogens, and often arrive under-fed with a weakened immune system. Quarantine is as much about getting the animal’s health back up to par, as it is making sure they aren’t carrying disease.

Fish require osmoregulation, which is a balancing act, keeping internal pressure on par with the surrounding water, and breaking down excess salt from the water, as it enters the body. Under full salinity conditions (SG 1.026) there is more salt in the surrounding water, then in the fish’s body. This means their kidneys, (and other organs) must constantly break down the excess salt. Of course, this process requires energy. Switch to hypo-salinity, (SG 1.013-1.010) and the surrounding water has nearly the same salt content, as the fish’s body. It saves a lot of energy and organ stress, not having to constantly dilute salt. Basically, it makes life a bit less stressful for fish. A fringe benefit is that marine parasites cannot osmoregulate, and therefore cannot survive in hypo-saline water.

Many aquarists implement a bare bones quarantine system. There is nothing wrong with this, quarantine systems are best kept simple. Yet fish are animals that inhabit reef ecosystems, where cover and environment plays an important role in survival. When tossed into a quarantine system with little cover, fish undergo a massive amount of stress. In order for fish to adapt to an environment, most species stake out a territory. When quarantining one species, it’s best to use items to create an appropriate zone. Clay pots are often used, and work, but a better alternative are artificial corals, mangrove roots and rock. These resemble objects that fish encountered at home, on the reef, and work to create realistic hiding spots. When quarantining multiple fish of different species, it helps to arrange the quarantine tank into separate territories for each species. This means constructing several “bunkers” out of decorations, giving the animals a connected, yet separate space to claim as their own. This also can curb aggression among quarantined fish, which can sometimes carry over to placid relations in a display tank. I’ve seen wrasse dens, and triggerfish dens offered for sale, and these make ideal territories for several species. 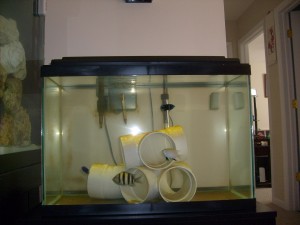 Most fish species are far more perceptive and social, than humans often believe. A lateral line, is literally a sixth sense, allowing the fish to detect movement and minor electrical signals. For example, shark species can detect a scuba divers heartbeat, before the diver even knows there is a shark nearby. Loud internal filtration simply confuses a fish with noise, and un-needed vibration within the water. It creates an environment where they struggle to adapt, and quickly become confused. It’s vital that even quarantine tanks have a sump, where all filtration equipment is housed. This creates a quiet space for the fish to explore, utilizing their natural senses. Also, it helps to restrict flow while a fish is in quarantine. Often their fins and scales have gotten damaged in transit, and they need time to heal. Placing a fish in a high flow, noisy quarantine tank, is similar to placing a stressed out person in a wind tunnel. 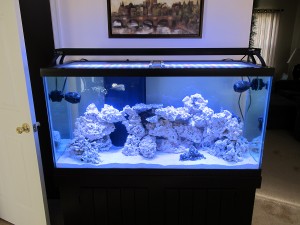 Fish create a natural body mucous, which protects their flesh. During shipping, this slime coat is often disturbed. Once disturbed, unprotected flesh can be penetrated by bacteria and parasites. Fungus can even grow on the space between the fish’s skin and slime coat. For this reason, using an aloe Vera product that helps quickly regenerate that slime coat, is very helpful. Also, many of these products fill in damaged areas of the coat, protecting them from bacteria.

Since fish are social creatures, it’s often good to quarantine species together, given that they get along. In the aquarium, I’ve watched fish learn behaviors from their tank mates. Feeding is no exception, and sometimes a fish reluctant to eat frozen or prepared food, catches on after watching how viciously his tank mates consume it. You must remember, in the wild, fish communicate with small groups, or schools, in order to feed, evade predators and their relationship among sexual hierarchies, determines where they will likely settle on the reef. So often, a little company while in quarantine, isn’t a bad thing, and since the hypo-saline environment kills parasites, there is little risk of two species making each other sick.

Filtration in quarantine is sometimes accomplished with just a sponge filter, which works if you plan on dosing medications. Although, a hypo-saline environment, is usually the only parasite preventative, or treatment, that you will need. Since the bio-filter remains in-tact, even in hypo-saline water, you can recreate the highly pristine water that reef fish are used to. This is perhaps one highly overlooked area of marine fish quarantine, as many aquarists simply don’t invest the same level of husbandry in their quarantine systems, as they do a display. In reality, the quarantine system is just as vital, if not more so. Don’t be afraid to add good quality protein skimmers to your system, and I even op for mechanical and chemical filtration as well. Also, create a space to cure hypo-saline water, and administrate regular partial water changes.

Often, thinking of your aquarium as a system, one unit with a variety of working parts, can help aquarists achieve success. While my aquarium system consists of two display tanks, it’s made up of a quarantine tank, frag tank, two sumps, a water change system and the display tanks. It’s a cohesive vision, and all functioning parts need to be healthy, and functioning in their intended role. The quarantine process is a vital one, especially when adding new fish species. If time is taken to ensure the quarantine tank has pristine water, and set-up with a focus on fish’s natural behavior, and making them comfortable, then success will follow.

This is the first part in a series, which will help guide you to achieving success, even with delicate fish species. Many, many aquarium fish die of stress, which could easily be prevented. My goal is to help you ensure that stress kill another fish in your tank. 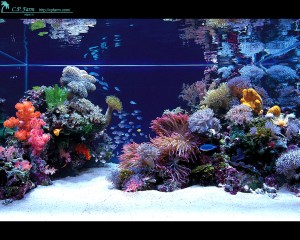