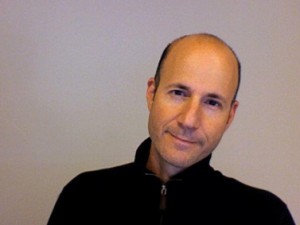 Julian Sprung is one of reef keeping’s great innovators. If you’ve ever met Julian, he’s a soft-spoken guy and I imagine the wheels inside his head are always grinding away. It was Julian Sprung, along with Mike Paletta and a handful of others 20+ years ago that helped pave the way for the captive reef aquarium. They developed coral fragging, and broke barriers in understanding what coral life needed to thrive in captivity. Julian started his own company, Two Little Fishies (TLF) and I imagine most of us have used a Two Little Fishies’ product at some point or another. What makes TLF unique is that they don’t produce and market expensive, or necessarily high tech aquarium equipment. There isn’t a TLF lighting fixture on the market, or even a TLF protein skimmer. In fact, their simple Phosban reactor is probably as close to either of those things as the company has gotten. What they do is consistently create innovative, effective and helpful products, with a strong curve toward common sense and long term aquatic success. 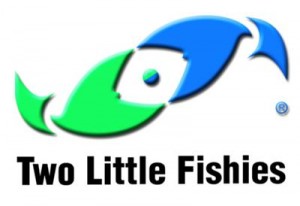 TLF started on the heels of revelations Julian Sprung made as a reef aquarium pioneer. You can trace his work all the way back to the now defunct Freshwater and Marine Aquarium Magazine (whom your’s truly once penned features and columns for). TLF opened its doors back in 1991, long before the explosion of reef keeping that led to today’s industry. The company had humble beginnings, offering a few books on reef keeping (including Sprung’s infamous Reef Aquarium series) and an introductory video on how to set-up and maintain a reef aquarium. From there the company branched out, offering a line of additives, feeding apparatus, coral and fish foods, combined with a host of other helpful products. Consistently TLF’s products offer something unique; some simple touch that can ease the stress of keeping a reef aquarium stable.

Phosban (TLF’s take on granular ferric oxide) was the first phosphate absorption media I used (in a time when phosphate absorption media was a fairly new thing), and it’s still highly effective, and highly regarded today. TLF’s easy to use magnetic algae clip made it possible to feed your herbivores seaweed without getting your hands wet, and TLF’s new net magnetic feeder offers the ability to let your fish naturally graze on foods, without reaching into the tank. This year at Reefapooloza (I guess I spelled that right) Sprung introduced a few new products, and a couple of them caught my eye. It appears like TLF is moving forward with their usual blend of helpfulness and innovation. 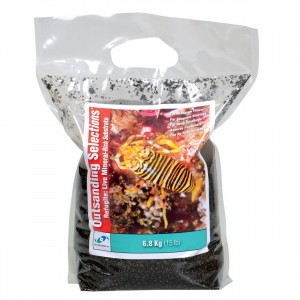 TLF’s refugite is a mineral packed sand, primarily for use in the refugium. The sand is rich in iron and magnesium – both beneficial to the growth of sea grasses and macro-algae. In addition, refugite absorbs phosphate and can even be regenerated making it almost like a standalone phosphate media. While refugium sands are nothing new, refugite is packaged live with TLF’s own biopronta nitrifying bacteria, offering new aquariums almost instant biological filtration. Like TLF’s aragonite sand (which is one of my favorites) refugite is conveniently packaged in 15 pound bags. If your refugium’s substrate is either a bare bottom, live rock or traditional live sand, it may be worth giving refugite a shot. The minerals within are also known to accelerate the growth of some LPS coral species, and can also aid in polyp extension. Certain LPS coral species come from reefs surrounded by rich volcanic sand, and refugite is a good substitute to that environment. 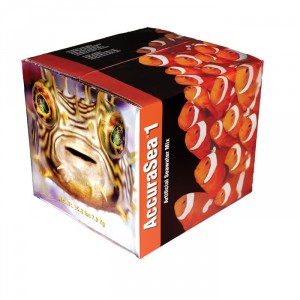 It’s hard to imagine a synthetic sea salt revolution. Most salts are easy to use, ionically balanced and easy to mix with reverse osmosis water, creating artificial sea water. TLF has re-imagined the way salt is packaged, and instead of selling their salt in one big bucket or bag, they have created a box of five individually sealed bags, each creating 5 gallons of seawater. In addition to that, they offer precise measurement instructions. For example, mixing one bag with 4.5 gallons of water yields water with a specific gravity of 1.026, along with a calcium concentration of 420 ppm and alkalinity of 8 dKH. Sprung is so confident about the accuracy of TLF’s new salt, he states that if an aquarist follows the precise mixing instructions there is no need to test the artificial seawater with a refractometer.

When salt is packaged in either a bag or bucket, once that is opened the salt within reacts with humidity in the air. The result is that the salt hardens, and as the aquarist scoopes it out, the grain of salt can diminish meaning one mix of salt may be slightly different than the next. TLF hopes by packaging their salt in individually sealed bags, they can remove any degradation of quality from one mix to the next. 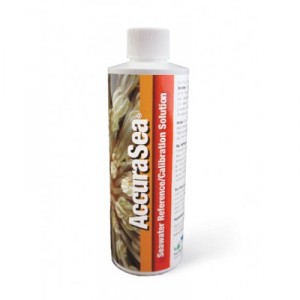 Often when running a calcium or alkalinity test on our tanks, we have nothing to compare the results too. Sometimes when an element seems to test outside of predicted parameters, we are left wondering if our water chemistry has changed, or the test kit is failing. The same can be said when using refractometers, which sometimes present values that aren’t consistent with salinity probes or predicted specific gravity. TLF hopes to solve this dilemma with a new calibration liquid, which is literally naturally harvested sea water taken from TLF’s location in Florida. The water is then diluted with RODI water to the exact specifications of 35 ppt salinity, and a stable reef balance of calcium, alkalinity and magnesium. Before going off for sale, the University of Miami tests Accurasea to ensure that it’s a viable calibration solution for a variety of purposes.

Having a bottle on hand seems like a good idea, in the event you get a reading that doesn’t make sense. It could certainly diagnose a faulty test in lieu of changing water chemistry, and prevent a disaster caused by dosing an aquarium with elements it doesn’t need, due to a bad test.

Not re-inventing the wheel, but offering some smart solutions:

As I said earlier, TLF isn’t out to create the world’s most connected, high output lighting fixture or create a skimmer so powerful it removes organic waste in seconds. They move forward with a host of innovative products that get down to the root of reef keeping, water chemistry, feeding and maintenance. These new additions from TLF seem to be helpful additions to any reef keeper’s arsenal of juices.