Before I start this article, let me show you this video.

Holy moly. In my personal, humble opinion, this was one the nicest naturally grafted Montipora sp. that I have ever seen. Don’t worry my precious WWC  Sunfire Montipora, I still love you and you will always be my first love in the world of grafted corals. All the jokes aside, this video was actually taken on May 11, 2017 by Themarium, an aquarium boutique located in South Korea. They told me that they knew they had something special when the diver from their supplier told them that they found three Montipora colonies that were naturally grafted in the wild.

For those of you that are curious about natural grafting, or grafted, fused corals in general, please take a minute to watch the video that I made with Lou and Vic of World Wide Corals talking about this very subject. They shared the data that they have been collecting over the years along with confirmations from industry pioneer Steve Tyree’s observations, experiments, and experiences.

We know what grafted corals are now? Good, let’s continue! 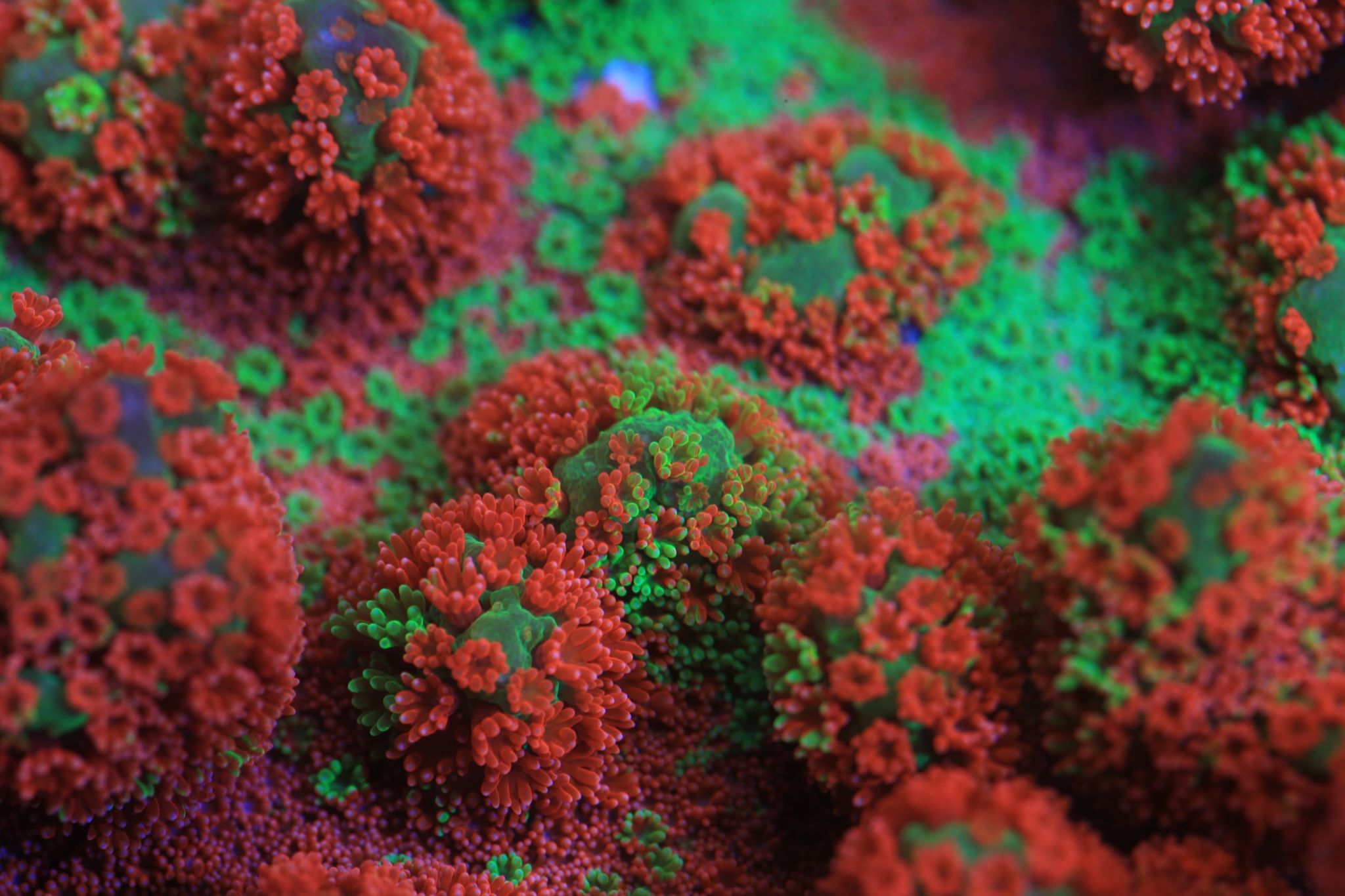 Before the ban on Indonesian coral exporting happened, this company has been flying to their Indonesian suppliers in Jakarta and Bali a few times a month to personally hand pick and to collect some nice pieces for their store; this particular piece was found by a supplier from Jakarta. The piece was imported with the cites as Montipora sp and was told that it is capricornis but as we can see from the video and from our experiences of growing them, it’s really hard to pin point and say that this is. It’s fascinating and breath taking to say the least. 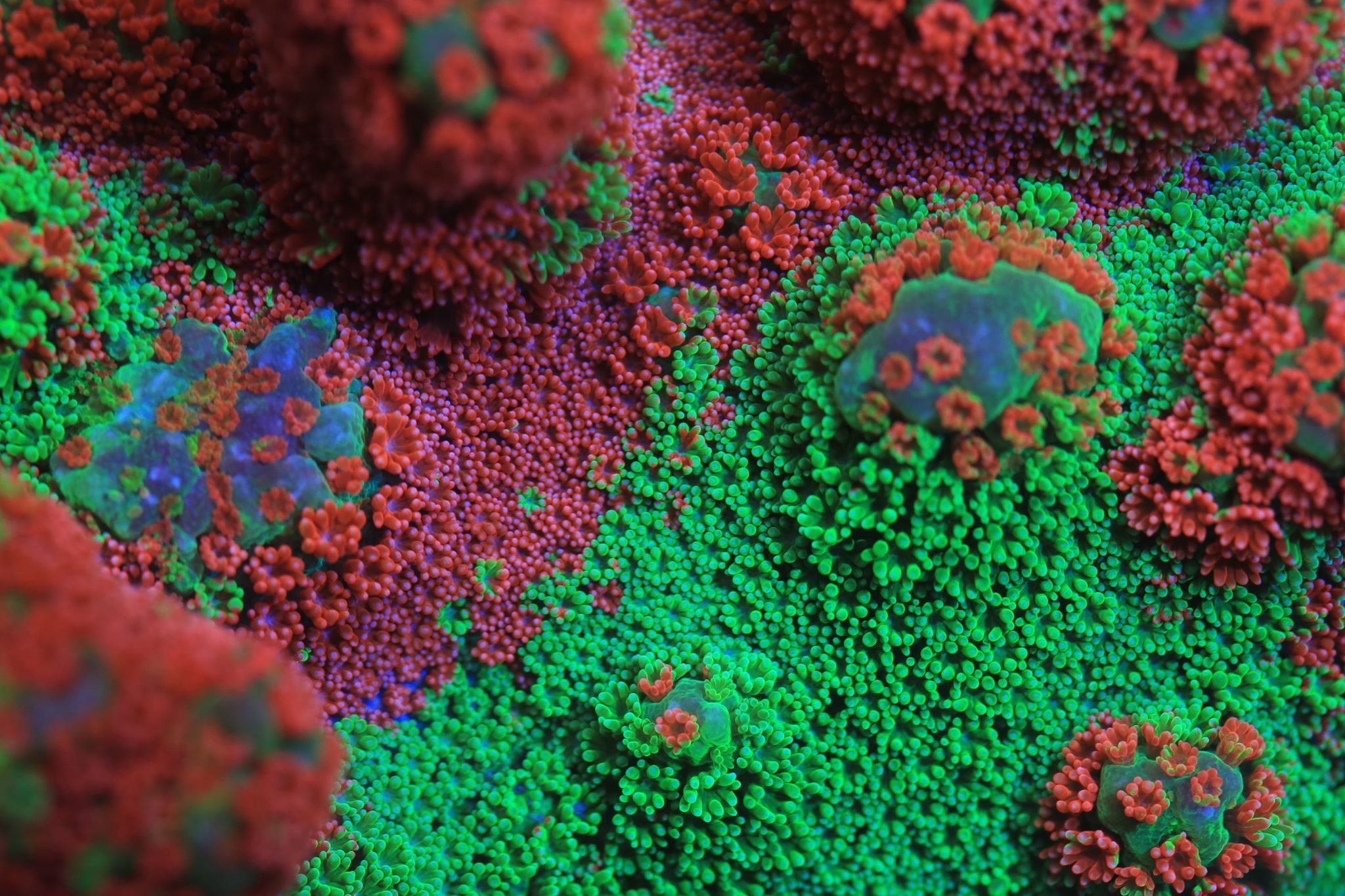 However the most interesting things happened during its captive life in aquarium over the last 2 years and 7 months.

The first thing that I noticed was the intensification of colors and slight morphing in its aquarium setting. 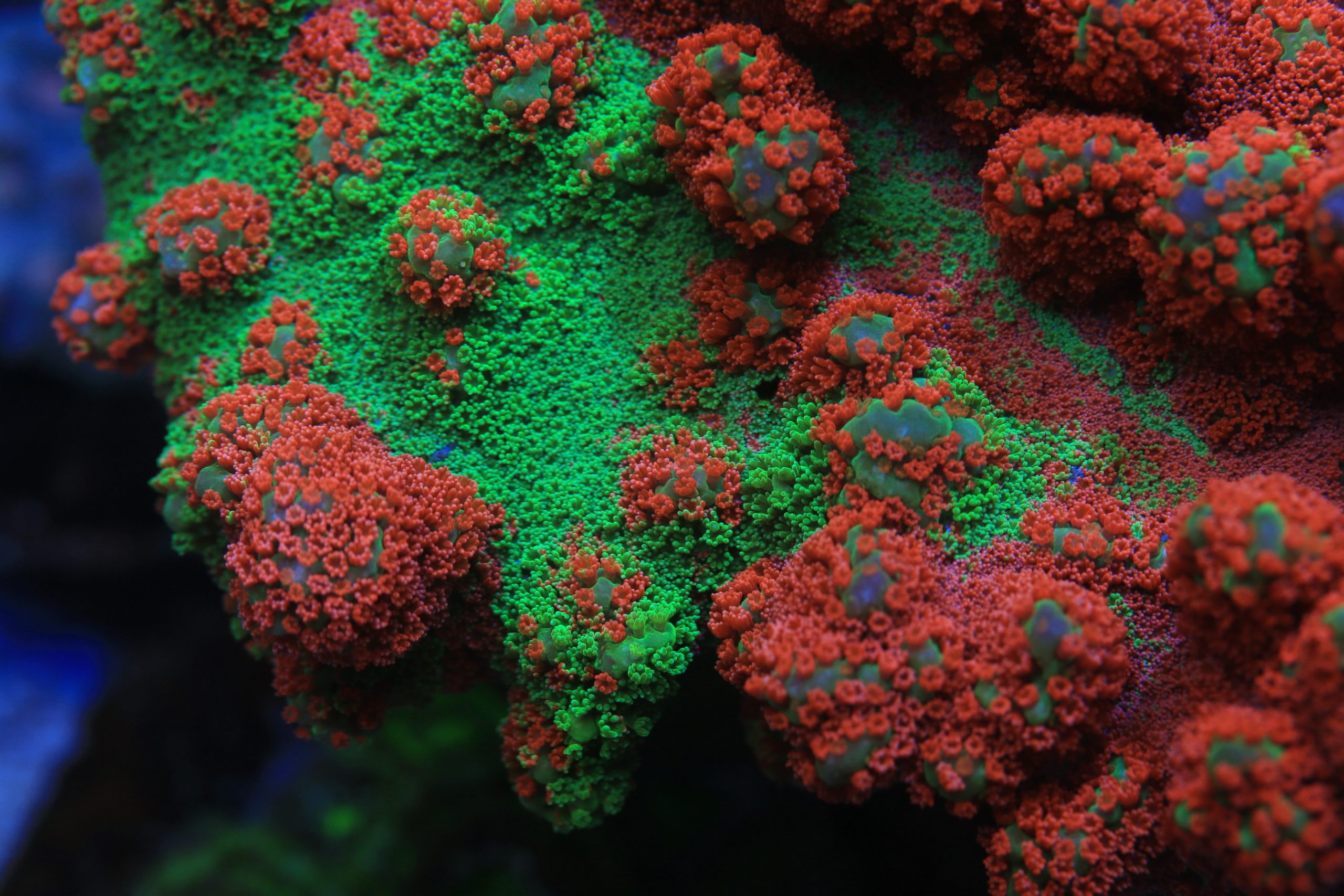 Colors got ridiculously darker and more vivid which is absolutely stunning and a joy to see. The blue skin looked darker and more defined, and the existing green, orange, and red pigments on the skin and the polyps became richer and showed good contrast. However one observation that I made and didn’t like was that the vibrant orange polyps on green flesh around the rim aren’t visible any more.  It’s definitely possible that they were fragged off, but, if it’s like any other Montopora capricornis sp, growth rate would have been fast and the skin base polyps would have been visible. The company told me that they noticed alot of the colors showing up and being visible on growth of fragments so I am hoping that it will be visible in future frags.

2nd thing that I noticed was the irregular growth pattern/shape.

Montipora capricornis sp is well known and loved for its shape in both wild and in captive settings. Resembling shelving mushrooms in dry land, many hobbyists grow various types of caps for this specific reason. When they first received the animal, there was no reason to believe that it wasn’t a capricornis, however, after years in captivity, they have noticed the weird growth that resembles Montipora nodosa; encrusting Montipora sp. Looking at the photos and videos, they are also displaying branching growth. Wild, isn’t it? 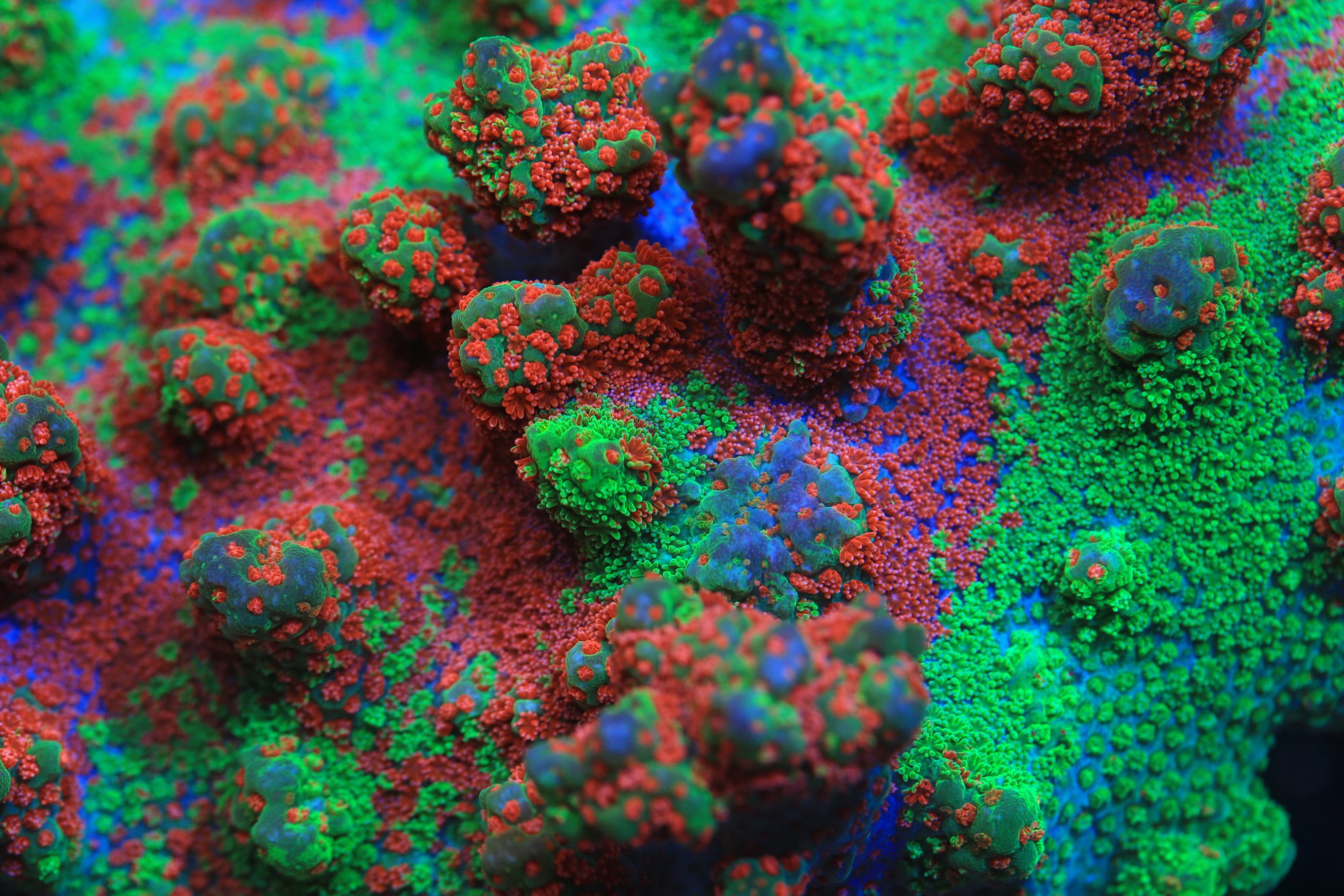 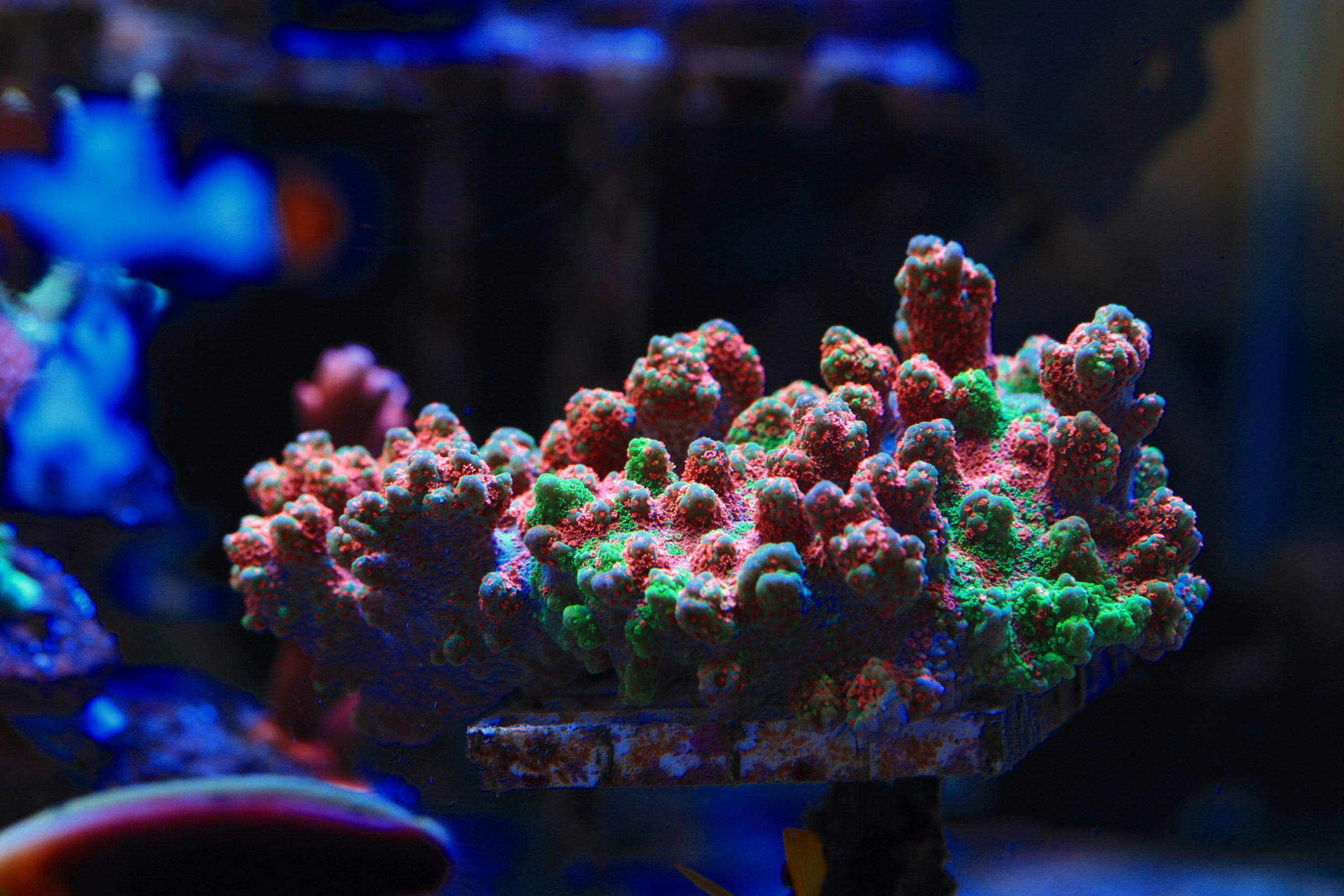 Look at the mother colony that was photographed in January of 2020. Shape has definitely changed as well as coloration.

Now the burning question is…. WHERE CAN I GET ONE? Right?

Unfortunately unless you are in the vicinity of South Korea, chances are very slim to none. According to the supplier in Jakarta, there were only 3 colonies like this in the region where it was found and only 2 displaying the signs of natural grafting after fragmentations in captivity. Making this coral very rare and truly a collector’s piece. We eagerly wait for Indonesia to open up again and for the divers to run into this type of montipora again so the rest of the world can enjoy its beauty in our home aquariums.

Hope you guys enjoyed the little introduction to this amazing coral. I will do many more articles and videos like this in 2020 so do check in from time to time. 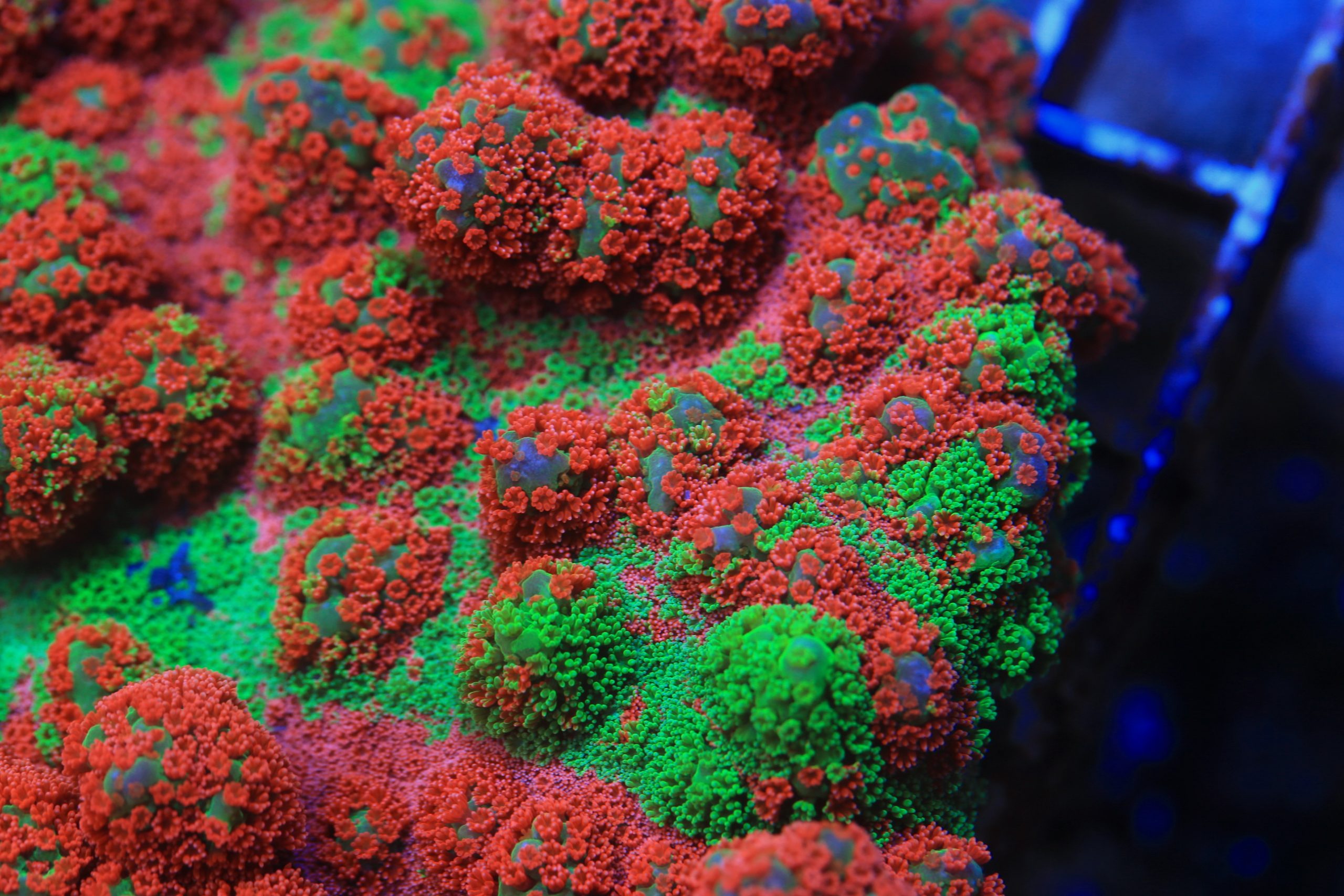 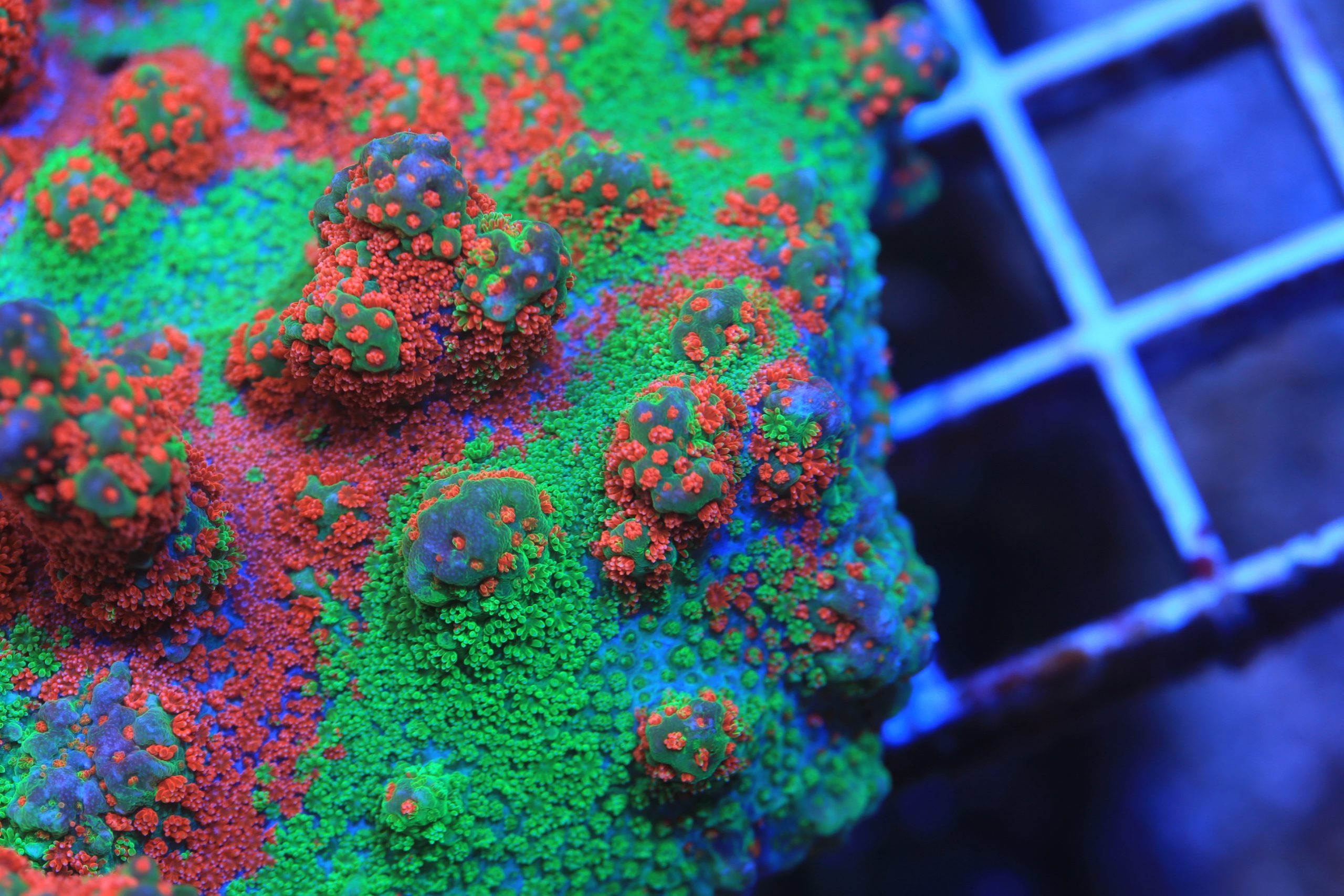