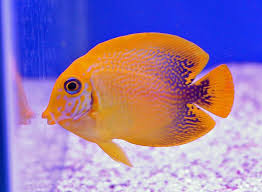 Many of us are familiar with the tang police. They exist on almost any internet forum and occasionally strike from within the walls of a fish shop. Their primary goal seems to be making sure no tang is kept in too small a tank, but often they end up belittling or badgering some well-meaning aquarist. In theory, the tang police are a good thing as surgeonfish are a species often sold as small juveniles, only to grow into large adults that need a lot of swimming space. I’ve found that often the tang police lack entirely accurate evidence and base their highly objective feelings on conjecture. In fact, when reading some responses from self-appointed tang police, I wonder how many of them actually keep surgeonfish. 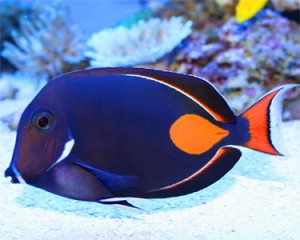 I can’t think of a fish species that has more rumors circulating around them than our beloved surgeonfish. To get at the heart of the issue, let’s look at facts about surgeonfish. Acanthuridae is the family of fish otherwise known as unicornfish, surgeonfish or tangs. They exist in tropical seas, normally living in and around coral reefs. Their bright colors and active behavior have made them extremely popular in home aquariums. In fact, I would fathom to guess that Acanthuridae is one of the hobbies’ most popular fish families. 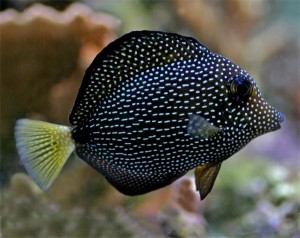 The rumor mill starts when aquarists begin talking about surgeonfishes’ susceptibility to ich. A quick google search will turn up lots of conjecture from private aquarists. Some claim that tangs have thin skin, others that their scale pattern allows the parasite to penetrate. Others suggest that tangs have weak immune system or that they lack the “ich-shield” other fish have. While it’s true that the slime coat of some fish species (i.e. dragonets) helps prevent external parasites, there is no such thing as an ich shield on any marine fish.

In all reality tangs are no more susceptible to ich than any other fish species. Much of the rumors come from the fact that tangs don’t fare well when captured and shipped. Many species stress when confined to an aquarium and all tangs have unique diet requirements. When fish are captured and shipped, often they go through extended periods of purging (when no food is offered). Anyone with experience keeping tangs knows that they love to eat, with most accepting both seaweed and meaty foods. While this too is conjecture, it’s my guess that stress from capture and shipping combined with lack of nutrition makes surgeonfish quite stressed when they arrive in our aquariums. 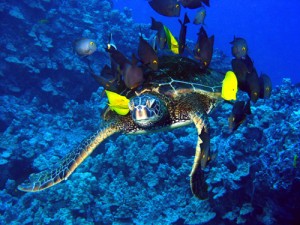 If a surgeonfish shows signs of ich, then the parasite is present in the aquarium system’s water and is surely affecting other fish. To assume that tangs are any more susceptible to ich is a major stretch. Ich is either present in a system’s water or its not and if it is, then sooner or later it will become a problem for all species of fish. I am not aware of any scientific literature studying tangs that speaks to them having thin skin or a weak immune system. If tangs are properly quarantined, fed and kept under appropriate water conditions, they are no more susceptible to parasitic infection than other species.

The argument is often made that tangs grow slowly, giving aquarists the impression that a small juveniles can be kept long-term in a small tank. This is complete bollox! Surgeonfish actually grow quickly, when compared to marine fish in general. A properly fed surgeonfish will noticeably gain size and often quickly transition between juvenile and mature coloration. Even if tangs remained small, they would still require a larger than average aquarium. Tangs inhabit large reefs in the wild, with lots of territories and zones to search for algae. Unlike blennies, clownfish and species that claim one small territory, tangs roam the reef and don’t stay in any one place for long. This statement will probably be argued, it’s my opinion that anything under 100 gallons isn’t suitable for even one surgeonfish, regardless of size. 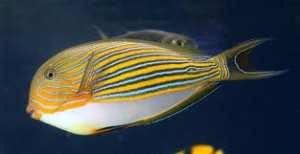 Looking over aquarium forums, there are numerous beliefs about tangs and corals. Some aquarists claim they are ironclad safe in reef aquariums while others argue that here and there they nip corals. Surgeonfish are as invertebrate and coral safe as any fish can get. In the aquarium, fish are going to irritate corals. They can bump into them, agitate them while picking at rockwork and pollute the water with nitrogenous waste. There isn’t a perfect fish for reef aquariums, as they all pose some risk to corals. Overall, tangs are as coral friendly as you’ll get and they even clean live rock and exposed coral skeleton of unsightly algae. 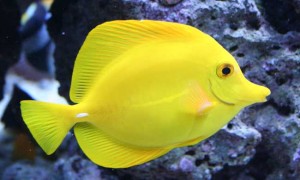 There are a myriad of tricks proposed by aquarists to manage aggression between surgeonfish. The reality is simple, the first surgeonfish added to a tank will establish the entire tank as territory. In the wild, surgeonfish roam areas of reef far larger than our aquariums. Often a school of tangs claims this roaming ground as territory, violently defending it against intruders, including other tangs. This natural behavior translates into a single tang claiming an entire tank (regardless of size) as territory. Since we often add one tang to the aquarium, it’s left to act alone in defense of home and food source. While it’s possible in very large aquariums to have multiple tangs, in most scenarios the practice leads to aggression, especially among members of the same species. Established fish see the same species as competition for a finite set of resources and simply will not accept it.

Some aquarists recommend changing rockwork and re-arranging the tank. I’ve not had any great success with this approach. If the aquarium contains an established surgeonfish, the only way I’ve found to introduce another without serious aggression, is to remove the established fish and place it in the sump for several weeks, while the new addition gets acclimated to the tank. It’s not uncommon, even with this approach, for the original tang to return to the tank, scalpel armed and ready for a fight once it sees a new surgeonfish inhabiting its domain. The best practice is to choose a species of surgeonfish carefully and keep only one.

The problem with surgeonfish: 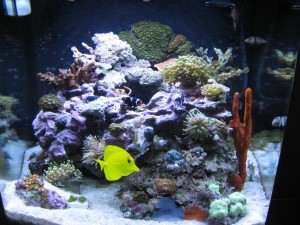 The forum thread title is often used, “keeping a tang is a 30 gallon tank.” Behind this statement is the fact that many, many surgeonfish end up in aquariums far too small to properly house them. This multiplies any challenge associated with keeping tangs. First, the small space increases stress and the increase in stress can cause serious aggression or lack of a feeding response. Tang’s can generate a lot of waste, which degrades water quality and promotes illness. The dominos become stacked against the entire aquarium and slowly tumble one by one, until major failure ensues. The main problem with tangs isn’t susceptibility to external parasites or aggression, it’s more our perception of the fish family altogether. Somewhere along the line, an impression has been created that surgeonfish are capable of being kept in aquariums far too small, or that they are somehow an easy species of fish to keep. Neither of these are true. In fact, surgeonfish require large aquariums and are extremely sensitive to sub-par water conditions. Somewhere along the lines we’ve gotten surgeonfish (hence the yellow tang) confused with fish that can exist in small, nano-style conditions. I’ve seen multiple advertisements for nano-aquariums with yellow tangs or others pictured as inhabitants. I’ve also seen livestock vendors advertise “nano-sized” juvenile tangs for sale. Instead of tang police, I offer tang reality: in that keeping any species of surgeonfish is an undertaking, with various species being quite difficult to maintain in captivity. It’s not something that should be attempted by an unskilled aquarist or one limited by the size of their tank.