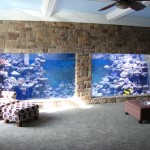 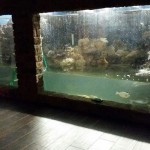 If you’ve been in this hobby for any amount of time, you’ve most likely experienced a crisis of some sort – anything from a little hiccup to a full blown catastrophic failure. The average hobbyist, however, is dealing with something like a 75 gallon system, with some larger systems topping off around the 400 gallon mark, and impressive builds flirting with quadruple digits. Then there’s Bill Wann and his awe-inspiring 20,000 gallon home reef system. Bill is an apex hobbyist. When you design and construct your own 20,000 gallon tank and proceed to constantly improve it, there aren’t many to look up to. But disaster sometimes strikes even the best of us, and Tuesday, in the wee hours of the morning, 20,000 gallons hit the floor.

Bill Wann and his girlfriend had a typical night, watching TV, enjoying the mild Wisconsin evening before turning in, the legendary 20,000 gallon build downstairs turning in as well, the fish flittering down for a siesta. Around 4 AM, Bill was awoken by their dog, eager to go out and he relented. Coming down the stairs, that’s when the smell hit him. The smell of an empty reef tank. The thick, viscous smell of stale coral mucus mixed with the mild decay of algae. His 20,000 gallon tank was now standing firm in about 18 inches of water.

Now, had this been me, I probably would have snapped around, stomped upstairs, crawled back under the covers and sobbed into slumber, praying for it all to be a horrifically vivid dream. But that’s not exactly productive, is it? So I reached out to Bill last night to discuss the events – the culprit, his reaction, his future plans and lessons learned from the incident. For someone who had just endured such a fiasco, his optimism was humbling. Not only was he willing to talk to us, but he was eager to share his story in hopes it would help other hobbyists avoid similar mistakes and handle a crisis should one occur.

Our first question, instinctively, was what does one do when they realize there’s nearly 20,000 gallons of water NOT in their tank? And where did all that water go? Well, thankfully, all of the water went down a floor drain in the filter room, there was no damage to his home. His immediate reaction? Crisis control. He sprung into action, rerouting piping, getting the filter and temperature under control – essentially putting his tank in a crucial state of life support, preserving all livestock possible. He fired up his 10,000 GPD  RO system, and just started pumping out water. Matt Jensen of Sho Tank Aquariums swooped in, delivering sixty buckets of salt to assist with water production. Currently he has roughly three feet of water in the tank, and 4,500 gallons of saltwater mixed waiting to be introduced to the reef. Ever the optimist, Bill has decided to utilize this “low tide” as a way to get his rock work reorganized, building an even better system than before. 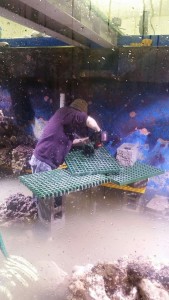 So the culprit here? One 6 inch pipe that lead from a 300 gallon surge tank. One he’s been meaning to do some work on for some time – the backside of the pipe burst against the wall, draining the tank nearly in full, they didn’t hear a thing. When he discovered the nearly barren tank, all of the fish were enjoying the shallows of the reef – he didn’t lose a single fish. Unfortunately, the corals were a total loss. A word of advice from him? Stop using hardware store glue! Just stop. It’s stupid. Use all the hardware store piping and pvc your heart desires but use quality glue.

Now it’s been mentioned that the average hobbyist is actively reef keeping for around 18 months before throwing in the towel. Usually this is due to unsuccessful attempts at maintaining a system – a crash, a parasite outbreak, a leak, what have you – and said hobbyist dramatically throws one’s arms up in the air and just gives up. What’s Bill doing? Going bigger. He plans to not only rebuild his current system, but upgrade to a larger system – anywhere between 65,000 to 85,000 gallons. The concept is completely built in Legos at the moment, he’s toying with the idea of a U-shaped reef or an octagon, at least twenty feet deep to allow for an exhilarating dive experience. And Bill surprised me once again, seeing the beauty in his unfortunate drainage – they’ve been enjoying the low tide reef so much that he’d love to incorporate a surge in his next system.

So again, this is just a gentle reminder to us all that yes, accidents and mishaps happen. Always be prepared, have a plan in place, and don’t let it steer you away from a hobby you are passionate about. A lesson that can be applied to many areas in life, not just our tanks. Thank you, Bill, for taking the time to talk to me even throughout all of the chaos. We all hope to see your tank up and thriving once again, and look forward to your next build. 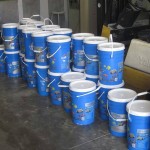 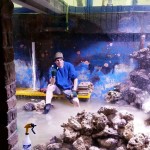