The passing of Bill Addison, owner and founder of C-quest marine ornamental fish hatchery, is a very sad loss for our industry.  Although fish farming represents just one chapter in his life, his contributions were significant and it makes me happy to see how much he is appreciated by the aquarium community. 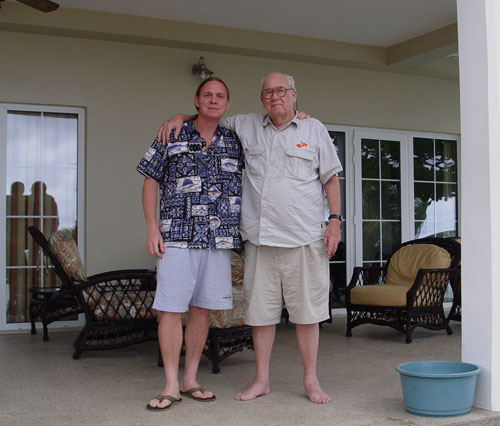 Bill and Me in one of his favorite places, Roatan

From the first moment I met Bill Addison, I knew I had found a kindred spirit.  I had never heard of him or C-quest until I found the address in the 1994 Aquaculture Magazine buyer’s guide.  It was one of a very few entries under the heading, “marine ornamental fish farms”.  I wrote to all of the addresses listed, asking for a job, but I only got one response – from Bill, inviting me to come down to see if Puerto Rico was a place I might like to live.  A few weeks later, after a brief visit, I was packing my belongings and heading into what would become the most important career move of my life.  It was also the beginning of one of my most cherished friendships. Bill was the first person I ever met who never tired of talking about fish. I guess that’s why we got along so well.  We’d stay up until all hours of the night talking about larvae, and food densities, and snorkeling, and fishing.  Then the next day we’d pick up where we left off as I siphoned tank bottoms under the shade cloth that protected our larval tanks from the Caribbean sun.

I remember watching a couple of scientists from Harbor Branch Oceanographic Institute having a long discussion with Bill.  I knew they were there to discuss the possibility of Harbor Branch acquiring C-quest, so I came up with excuses to walk past them every few minutes to see how it was going.  As expected, the conversation revolved around some of Bill’s favorite subjects: spawning, rearing, food densities, food conversion ratios, HUFAs, etc.  After a few passes, I noticed these two guys with PhDs in aquaculture, dozing off while Bill continued.  On my next pass they were both sitting there, on the couch in the office, upright, but sound asleep. I was appalled and a little amused and I couldn’t help but think, I guess these guys just don’t love fish enough.  Education never impressed Bill, but passion and hard work did.  I guess that’s why that particular deal fell through.

During the three years I spent at C-quest, Bill and Arline were like parents to me. They became my best friends, making sure I got enough to eat, making sure I got out of the hatchery often enough so that I wouldn’t get burned out, listening to me go on about my hardships: my failed romances, the lousy visibility I encountered on my day off, and of course, the frustrations of fish culture.  Arline had a nurturing way about her that always made me feel like I wasn’t thousands of miles from home and Bill always offered advice that really put things in perspective.  One day while I was agonizing over a tankful of neon dottybacks (more than 1000) that died due to my miscalculation of a medicine dosage, Bill, who should have been furious, said to me: “Well, I guess you’re a little closer to being an expert. You know, I don’t consider anyone an expert until they’ve killed at least a million fish.”  We were selling neon dottybacks for twenty dollars each in those days, so I had just cost the company $20,000, and that was all he said to me.

I had a standing offer for Sunday dinner with Bill and Arline and I rarely missed it.  Sometimes, if I got there early, we’d have a rum and coke or a red beer (beer with tomato juice) and Bill would dial up Martin Moe, or Forrest Young, or Frank Hoff and put them on speaker so we could talk about the latest in aquaculture technology or gossip, or just try to glean some insights from the words of these true pioneers. Then Arline would order us to the table where I would devour my one great meal of the week. After dinner Bill would thrill us with stories of his days prospecting for minerals in the mountains of Wyoming or of his time fighting in the South Pacific in World War II.

My favorite story was about his ride home at the end of the war.  He was on a battleship, stationed in the crow’s nest as they headed into a typhoon. His commanding officer ordered everyone below deck, but apparently, had forgotten about Bill. Although it was clearly an oversight Bill, as a marine, was well trained to act only on orders, so he alone rode out the storm through the night, being alternately plunged into the ocean on either side as the ship rocked nearly ninety degrees from center.  In the morning when the sun came up and the storm was behind them, Bill climbed down and was confronted by his commanding officer who asked in suppressed amazement: “You were up there all night?” “Yes sir” replied Bill.  “Hmm……carry on” replied the CO.  I think there was a lesson behind every one of the stories Bill told.  I guess that one was about the importance of the chain of command.

Bill made his fortune in mining and he also liked to tell stories about those days.  Although some stories were more for shock value (like the time he lowered his young son in a bucket, into the shaft of a uranium mine to scrape the walls and check for uranium), most of them helped to remind us that although the fish hatchery wasn’t exactly thriving as a business, Bill spent most of his life as a very successful business man. This was particularly important to remember when I thought about giving him advice about how to make C-quest profitable.  During my three years there, I watched a steady stream of businessmen come through with offers to buy the company, run the company, or become partners. Some of them returned multiple times. After their visits I would ask Bill, “So, does it sound like a good deal?”  He’d say, “Yeah, it sounds like a great deal…for them.”

I also watched a steady stream of managers come through – seven in just three years. Each one had ideas about how Bill could make money.  He just needed to move the hatchery, or spend more on research, or enclose the hatchery, or hire more people, or overhaul the filtration, or some other project that would cost tens or hundreds of thousands of dollars.  That’s when he would tell his favorite mining story.  He had a profitable uranium mine that he sold to Union Carbide, but after they bought it, they couldn’t turn a profit.  They asked him to come back as a consultant, but after seeing how they spent money on all the latest technology and most expensive supplies, he had to tell them that they could never make it work.

Once I suggested that we remove the paint from the corrugated fiberglass roof over the hatchery.  I didn’t know why it had been painted in the first place, but I thought some natural sunlight might be good for the broodstock.  Bill said, “Todd, I’ve painted and scraped the paint off that god damn roof four times, because each new manager thinks they know how it should be. However it is now is how it stays.” I came to accept that there were a lot of things that would never get fixed at C-quest, but that a big part of the reason for Bill’s success in business was that he wasn’t inclined to throw money at problems. He succeeded where Union Carbide failed because he could make do with what he had on hand.  This is a lesson that has served me well in aquaculture ever since.

Bill taught me a tremendous amount about aquaculture, about business, and about life, but I think the most valuable lessons came from watching the way he and Arline interacted.  I watched them very closely because I was intrigued by any two people who could stand to be together for so many years. Even when they disagreed, they remained respectful toward each other. Arline always praised Bill, not only for his tangible successes (of which there was no shortage), but also for the character traits that allowed him to get so much enjoyment out of life: his passion, his persistence (which she usually referred to as his stubbornness), his love of nature; and Bill always made sure to recognize Arline’s contributions. He always pointed out that none of his accomplishments would have been possible without her support.  When Arline would go to Wyoming to spend some time back home, Bill would tell me every day how much he missed her.

In the years since I left C-quest, I’ve gotten into the habit of talking to Bill and Arline on the phone every so often to catch up on hatchery news, industry developments, or just life in general.  Whenever I would get a new species through metamorphosis, Bill would be the first person I’d call.  I may not be able to call him on the phone anymore, but when I have important fish-breeding news he’ll still be the first person I tell.