The Pros and Cons of Frugality 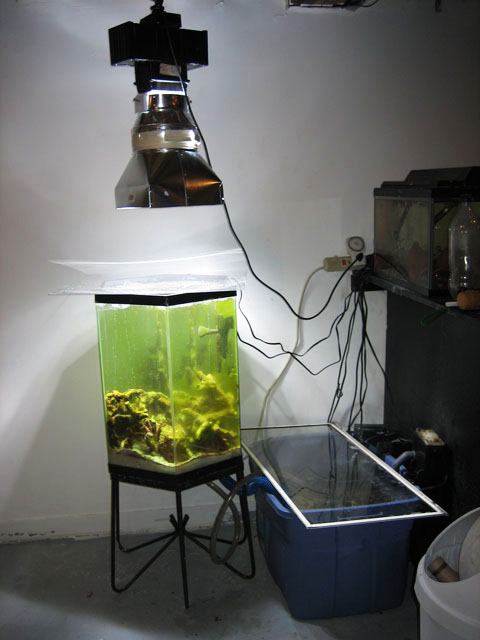 Some people get off on spending money, and reefkeeping is a great hobby for those people. There are tons of “high-end”, trendy corals, the latest and greatest gadgets, and bigger and better tanks for those with some extra cash and a hankering for retail therapy.

Then, there is my brother.

Doug gets a thrill out of seeing how cheaply he can set up a tank, with varying degrees of success. Need a reef tank? How about the old hex the neighbor put out in the trash? Cover? Old window screen (frame intact). Sump? Good ole Rubbermaid. Evaporation control? The storm window that came with the screen. The tank was drilled at home and plumbed with PVC and leftover Tygon tubing from who-knows-where. The light was a state-of-the-art halide, purchased for the price of “on the house” from a warehouse upgrading its lighting. And my favorite, the calcium reactor (at right): a Coke bottle, rinsed (some) and filled with calcium hydroxide and tap water. Ta-da, reef tank. This photo was taken early in its life, hence the green water as the system settled in.

Now, you might assume I am being critical of my brother’s system and methods, and mostly you’d be wrong. Sure, there are things that could be done better–for example, Mountain Dew Bottles work much better as calcium reactors. And, perhaps, a bit of electrical safety would be nice (one of Doug’s funnier quotes was “wow, that didn’t shock me as much that time!”). If you think about it, though, what he did was to create a living system out of nothing but roadside scraps and fixin’s from around the house. The point wasn’t to be beautiful, the point was to be functional, and it allowed him to try out the hobby with almost zero financial input. This system doesn’t exist anymore (shocking, I know). It’s been replaced by an in-wall ~200g built with the same mentality–it’s a plywood tank, sealed watertight and strengthened with layers of epoxy and automotive fiberglass. I’ll save that tank build for another post though.

So why is this blog worthy? Centainly it is not “Tank of the Month”. It demonstrates, however, that anyone can keep saltwater fish if they are willing to invest the time to build, and more importantly, the time to educate themselves. Plug-and-play, this system is not. But moving away from the rigid thinking that “reefkeeping is extraordinarily expensive!” opens the hobby up to the less financially capable–especially kids.  Just make sure drip-loops and GFI’s are part of that education 🙂