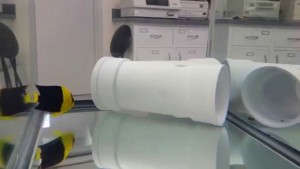 I like to experiment in my personal reef tanks. As long as the experiment doesn’t harm any tank inhabitants, and doesn’t risk my personal sanity, I am willing to give it a shot. Some experiments turn into permanent methodologies. Zeovit usage was an experiment I conducted several years ago. I liked the results, and it has been implemented ever since. Ozone was an experiment as well, and once I had a taste of gin-clear water, I couldn’t give it up. I also experiment with various medications for parasites, and after trying a host of them over the years, I still believe that hypo salinity, copper and formalin are the most effective ways to treat a parasitic outbreak. Experimentation over the past year has led to a few new personal methodologies for me. One, I greatly reduced the number of fish in my reef. What was well over a dozen has now dropped down to three.

Earlier this year, as I reduced my reef’s fish load, I wondered if it was possible to truly keep them parasite free. We all hear the horror stories of parasitic outbreaks, even when no new species have been added to the aquarium. There are several reasons why this can happen. One, your fish might have a temporary immunity to parasites. A recent scientific paper detailed just how fish can become immune to external parasites. The parasite is still alive and well, but the fish’s body produces a protective mucous which prevents a full blown outbreak. If that immunity weans, as many immunities tend to do, you’re back to square one with a full blown infestation.

Amyloodinium (marine velvet) is actually a dinoflagellate, meaning it gets some of its nutrition via photosynthesis. Amyloodinium can survive a long time without a host, and is impervious to hypo-salinity. Infestations of this parasite can go on for what seems like forever, and the traditional 45 day fallow period used for marine ich sometimes doesn’t kill off amyloodinium. To make matters worse, this common parasite kills fish quickly and can wipe out all piscine livestock. 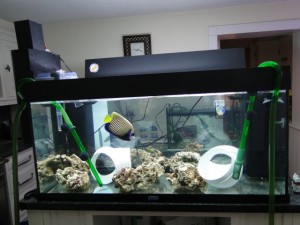 Quarantine is a preventative. It is mainly effective against preventing marine ich from infiltrating the display tank. Ich responds well to hypo-salinity, copper and formalin and usually doesn’t kill fish before treatment starts having an effect. Quarantine is also a great time to treat against common internal parasites, worms and other parasitic maladies that effect newly collected fish. Quarantine also gives individual fish a chance to adjust to captive life and acclimate onto a prepared diet. It’s a vital stage of keeping marine fish long-term, and most successful aquarists implement it. However, it is not 110% effective against preventing parasitic outbreaks. Parasites do infest systems where the aquarist has quarantined all fish livestock.

The problem that exists is that once a parasite enters a reef aquarium, it can be literal hell to get them out. Corals and invertebrates can be killed using any of the effective medications, and the products advertised as reef safe often aren’t effective at all. Treating parasites causes major water chemistry instability; as temperature, lighting and other parameters may need tweaked to kill off parasites. For an aquarist, once a parasite infects a reef tank it can feel like all has been lost. Trust me, it takes a lot of sweat and tears to remove a parasite from a reef aquarium, and at times I’ve considered giving up keeping fish altogether.

Some hope in vaccines: 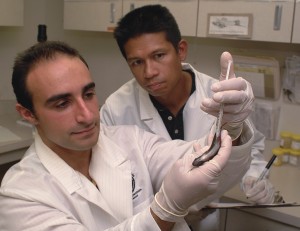 Not long ago I reported on a scientific paper that detailed efforts to vaccinate fish in commercial aquaculture farms. Researchers determined that fish could build up an immunity to marine ich, and using ich killed during formalin treatment, were able to create a viable vaccine. This may seem like a major breakthrough, accept it’s effective against only one parasite and would take years, if not longer, before we start seeing ich vaccinated fish offered for sale. Honestly, chances are hobbyists won’t see ich vaccinated ornamental fish, and even if we did, eventually the fish would need vaccinated again and the process is outside the realm of even advanced aquarists. 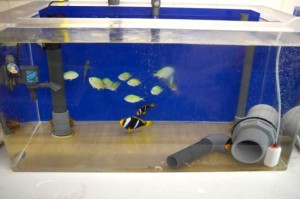 In trying to solve the dilemma, I came up with a method that helps pick up where quarantine leaves off. Quarantine usually lasts for 45 days, sometimes longer, sometimes shorter. Then marine fish enter the display, and the advantages of quarantine are lost. What if marine fish were quarantined and treated yearly, for about 60 days. This 60 day fallow display tank period would be long enough to kill off 99.9% of marine parasites, and also allow the aquarist to clear-up any residual parasites on the fish before an outbreak. It’s not a vaccination, but a yearly “parasite flush” of the display tank and all its inhabitants.

The challenges associated with this approach: 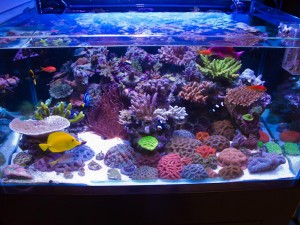 First, it may be difficult for an aquarist to remove seemingly healthy fish and place them in quarantine. It may seem at first to be counter-productive. Naturally, removing established fish from their tank will cause stress. Typically in any medical procedure, the benefits of the procedure are weighed against the risks. The benefits here are obvious, if the fish are harboring any parasite (internal or external) and not showing symptoms, you will be taking care of it before symptoms show up (which is often too late). Also the display tank will have a long enough fallow period to be “flushed” of any live parasites.

The risks are minimal. Yes, it may cause some un-due stress to both the aquarium fish and the aquarist, but if existing tank water is used in the set-up of the quarantine system, chemically the water should be the exact same. The biggest concern is removing all of your aquarium livestock. All of us know that fish settle well into a reef tank, and in time are impossible to remove. Yanking out live rock and coral is so stressful to the reef’s other inhabitants and the process alone can cause serious problems.

In my situation, I set up my reef so that I could complete a yearly flush period. I have a shallow sand bed, and all my corals are affixed to large pieces of live rock for easy removal, which removes all the rock and coral in just a few steps. Then, the fish tend to be pretty easy to remove, hence the small fish load. This is a process that really requires your entire reef to be prepared for it. A bare bottom tank works well, as there is no sand to stir up, clouding water and risking coral health with debris build-up. Something like a 20, or 30 gallon long aquarium (even some plastic storage bins) works well to house corals while removing fish. A tank flush can even work well as a chance to re-aqua scape your tank. 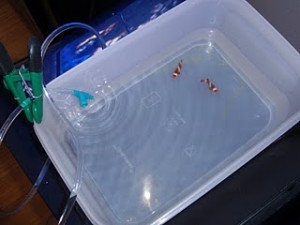 I also think a tank flush would work well when adding a new specimen. The new arrival could be quarantined in a smaller, separate quarantine system while all existing fish livestock is removed to temporary quarters. The main display aquarium could be re-designed (aqua scape why) which would remove various barriers that could lead to aggression. When the flush period is over, the new arrival could be added first, further decreasing the risk of aggression from tank-mates.

Some things to have on hand: 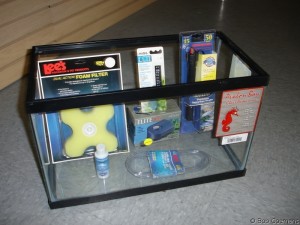 First, you’re going to need a separate, but sizable second aquarium. I recommend one of the large sized all in one tanks on the market, as there are a variety in 30, 60 even up to 120 gallon varieties. Otherwise, most of us have spare protein skimmers, heaters, filters, lighting, etc. lying around – this is a chance to put them to good use. It’s also helpful to have a smaller quarantine tank if you intend on using the flush method to aid in acclimating new arrivals. Since copper is hard on various fish species, a good approach is to slowly create a hypo-saline environment once your fish are acclimated to the temporary quarters. Hypo-salinity alone will take care of parasites like ich, but combining it with formalin (a safe and very effective method) will take care of anything else. Doing this for 30 days will certainly rid your fish of any un-seen parasites.

The second 30 day period can be devoted to returning the water to normal salinity and treating with Prazi-Pro in the event there is something internal going on. It’s not uncommon for fish to harbor internal parasites, so a flush period is the perfect time to address that. After that a short week, or two week long period under display tank conditions with no treatment should have your fish ready to head back home. When stacked against 365 days in one year, during any of which you could have a parasitic outbreak, 60 days doesn’t seem like too much time to devote.

Doing a yearly parasite flush truly requires an aquarium system devoted to this procedure. Also, precautionary treatment of fish isn’t something to take lightly, and requires a good understanding of how to use medications and environmental treatments. The goal behind the procedure is picking up where quarantine leaves off, and using a consistent process to keep your fish parasite free. It may seem redundant, but it’s often redundancy that is most effective in preventing serious problems in the long run.