In the boreal (Northern Hemisphere) Spring of 2014, warm waters began to appear at the surface of the equatorial East Pacific. This appearance caused much stir and speculation about the potential development of something we have not seen in nearly two decades now: a strong El Niño event.

A brief refresher: The El Niño – Southern Oscillation is the largest form of year-to-year climate variability on the planet, affecting sea surface (and coral reef) temperatures, as well as weather patterns, on a global scale. They can wreak havoc on socioeconomic establishments ranging from architecture to agriculture in addition to pummeling natural systems, causing widespread bleaching and potential mortality for coral reefs.

However, as summer came and summer went, conditions in the Pacific remained neutral and benign. In September of last year, I published This blog post detailing what an event was, why it matters, and why it may have fizzled out. The global climate system and coral reefs worldwide will not likely dodge a bullet this year…

Current sea surface temperature (SST) anomalies, or departures relative to the average for this time of year, as of today, June 11th. Notice the extreme warming in the Eastern Equatorial Pacific.

As 2015 crept into the spring, that same warming in the Eastern Pacific has reappeared. And unlike 2014, there is no hint of it backing down. On the contrary, it seems to be following the trajectory of the most extreme event in the record, 1997/1998.

Same as above, but using available data from the same week in June, 1997.

In fact, the regions where we monitor El Niño in the tropical Pacific show warming that is already arguably stronger and more pronounced than what was observed in the early summer of 1997. These departures can be tracked weekly using the NOAA Climate Prediction Center El Niño – Southern Oscillation update website. 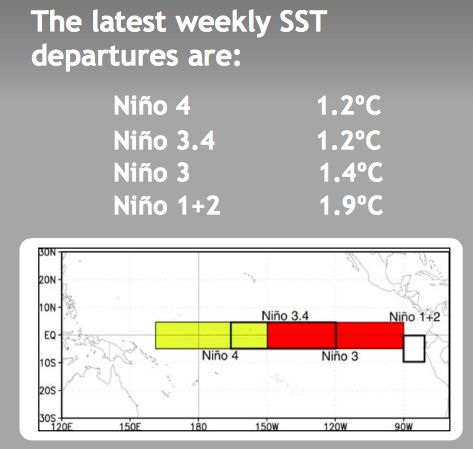 NOAA Climate Prediction Center current weekly anomalies in different El Niño monitoring regions. Surface temperatures in the Niño 3.4 region only need to be 0.5°C above normal to be in “El Niño Conditions”, they are currently at 1.2°C above normal.

I have started a thread in the Science Forum for updates and discussion, but the take home message here is that we may be facing an extremely large event, with unforetold impacts on our beloved marine ecosystems over the coming year. 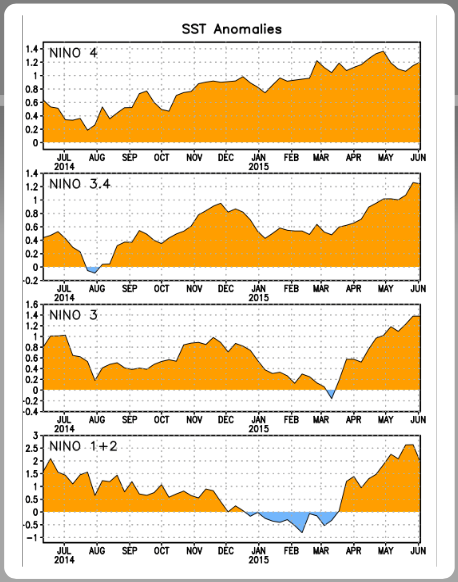 Time evolution of surface warming in areas of the Pacific where El Niño conditions are monitored.