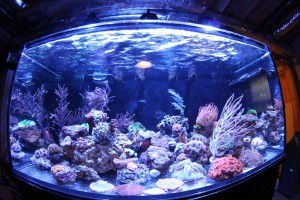 I recently read a reefing blog that suggested some Internet and magazine “experts” didn’t own an aquarium, and were simply copying the success of other reef keepers to develop an online or print persona as an aquarium expert. I have commented in the past that I greatly question the quality of advice thrown around on open forums, even some offered by site administrators and moderators. I can say, I’ve known many experts on marine life that didn’t keep an aquarium, but greatly aided me in my success as an aquarist. This includes research scientists on up to people like Ken Nedimeyer of the Reef Preservation program on Key Largo, FL. 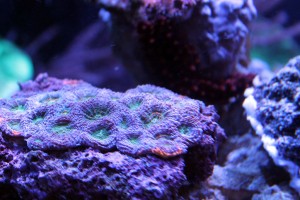 As I was reading the post, I realized that I very seldom post any photos of my personal aquariums. In reality, if you aren’t my friend on Facebook, it’s unlikely you would even realize I have tanks, even though I mention them from time to time in my writing. In an effort to prevent falling into the “expert” without a tank designation, I’ve decided to talk about my own personal systems, with all the pictures in this post being of my personal tanks. I will say; a lack of pictures of my tanks is more because of my poor photography skills, not my skills keeping marine life healthy. My entire fish-room is built around a goal of sustainability, from how water is discarded on up to individual animal health. Instead of discussing that here, the sustainability procedures I’ve put in place are better explained in a post of their own. 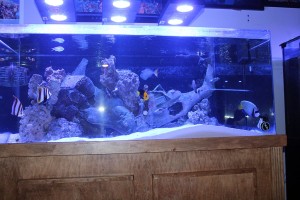 My personal tanks total 500 gallons, including the 60-gallon sump that feeds and filters my fish only tank. I opted for three separate tanks, based on various events in my reef-keeping career, which led me toward that decision. I built my house in 2012, and designed the entire basement level as a fish room. In addition to the display tanks, I have dual 55-gallon tanks that serve as a quarantine system, and a 55-gallon that acts as the fish room hospital. 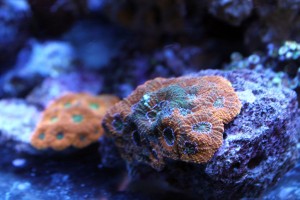 This tank is an Innovative Marine Nuvo SR 120. I opted for this particular tank for several reasons, one being that I wanted something simple to set-up that could easily be changed as I am often attempting new methodologies. The nuvo serves that purpose well, as the basic core (main pumps, overflow) is suited to the tank size and requires almost zero maintenance. The tank is run bare bottom, largely because sedimentation is a major threat to coral health and deep sand beds are no longer needed for nutrient break down when implementing modern filtration options. 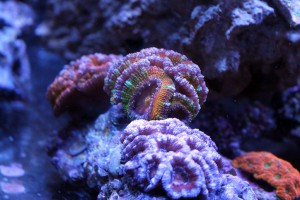 I’m a zeovit advocate and user, so the tank is primarily filtered with zeovit in a AVAST vibe automated reactor. The vibe is great, and using the apex controller it can be set to shake the zeovit media twice daily. Since I use zeovit I don’t implement a UV sterilizer, as they are known to greatly diminish zeovit’s nutrient breakdown abilities, killing off much of the beneficial bacteria. I do run an external reef octopus skimmer on the tank, but it turns off for several hours during each zeovit shaking and dosing, only running a total of 18 hours per day. 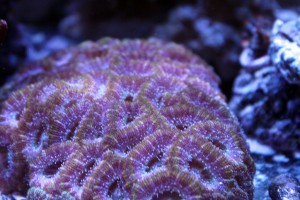 I dose by hand, using the Triton reef fundamental mixture for calcium, alkalinity and magnesium. As far as zeovit dosing, I rotate amino acids and coral growth and coloration boosters based on nitrate readings. Even though zeovit can accomplish a tank with 0 nitrate and phosphate, heavy dosing can quickly raise nitrates. 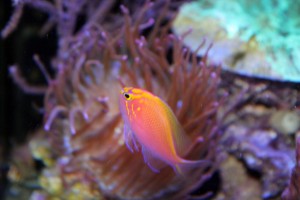 Lighting is accomplished with three Kessil A360Ws on the Kessil controller. The lights kick on at 11 a.m. and ramp up to peak by 4 p.m. and begin ramping down around 8 p.m. kicking off at 11 p.m. Circulation is accomplished by the new Maxspect gyre, which is set to alternate both flow patterns, changing every 20 minutes. 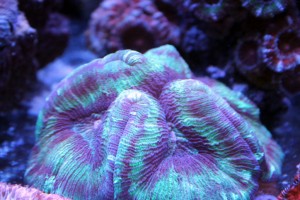 I do implement a carbon reactor (I prefer Bulk Reef Supplies’ Rox 8 carbon) and a GFO reactor as well. It seems counter productive to run GFO with zeovit, but I’ve had phosphate spikes in the past, even with well-cycled stones. The system is controlled with a Neptune apex, Kessil controller and monitored with a Seneye reef. 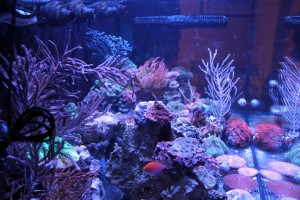 As you can see from the pictures, it’s primarily home to LPS corals, but I do keep some SPS corals as well. I refer to my reef as a frag reef, since I am constantly fragging colonies and giving frags out to various reef keepers. I like a change in scenery in my reef, and I also believe in spreading the love without a price tag, so my reef is designed with that in mind. There are more corals than I could list off the top of my head, with most coming from Pacific East Aquaculture and Unique Corals, two of my favorite coral vendors. 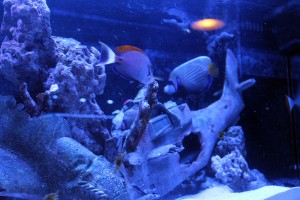 This tank is a 220 gallon TruVu acrylic tank. I made the decision to split reefs and fish up, mainly because I love fish more than any other aquatic creature (or land based creature for that matter). Trying to keep a reef, limiting my fish species to the narrow “reef-safe” margin just couldn’t feed my fish addiction. Finally, I decided that there needed to be a separation of church and state. Both my fish only tanks are on a central system. My large tank is kept for species I plan on keeping until they reach adulthood. To give you an idea of how long I keep fish, I just lost a purple tang, which was nearly 14 years old. When I get a species, I’m in it for the long haul.

Circulation in the tank is accomplished with the Ecotech Marine mp60w. It’s a great pump and the nutrient export mode helps move un-eaten food and waste up and out the overflow. Since I keep the fish only salinity at 1.019 SG, I opt not to keep any invertebrates. If a parasite arises, I like to be able to quickly move to treatment with hypo-salinity or copper if needed. I also use several antiseptics in the event one of the fish gets injured, which would harm invertebrate life. Since the tank does not have a cleanup crew, it gets weekly water changes and the sand bed is vacuumed, removing debris a cleanup crew would consume. 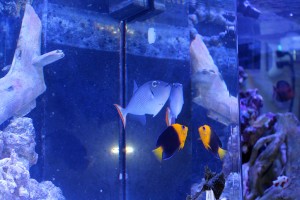 This tank is filtered by a 60 gallon sump, which houses a GFO reactor, carbon reactor, bio-pellet reactor, cupri-sorb reactor and Skimz skimmer. Since the tank’s been treated with copper in the past, I always run cupri-sorb which removes copper leaching from the sand and rock. I also supplement this tank with Continuum Aquatics Micro Bacter M and micro clean. Like I said, without a clean up crew extra precautions need taken to keep the tank clean. Lighting is accomplished with three Ecotech marine radions, two generation 2’s and one generation 3.

I use a mix of live rock and artificial décor in this tank. The reefs around Palau are full of wrecks from World War II, including many Japanese fighter planes. I sought to recreate that, and found Deep Blue Professionals’ line of replica aquarium ornaments to be quite realistic in appearance, especially after a few months in the tank. The helicopter in the tank is more of homage to my other hobby, RC helicopters and drones. 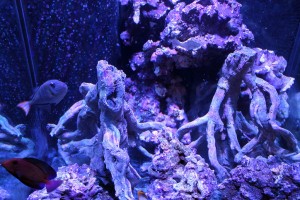 My second fish only tank is a 100 gallon cube. I literally bought this tank because I love the cube shape. I use it as a place to both prepare new fish for captive life post quarantine, and keep fish that get bullied in the main tank. It runs off the same central system as the other fish only, which assures that water quality is the exact same, in the event I need to move fish either way. Lighting over this tank is accomplished with one Ecotech XR15w. Since fish entering this tank are often moving there from QT, lights are traditionally kept dim; so only one light is needed. Circulation is provided by the Ecotech vortech mp40w, a great pump that does a wonderful job in any tank 150 gallons or less.

As I mentioned before, Neptune apex controllers control both tanks, and both systems are monitored with Seneye reef on a web server. So that I can control and keep an eye on my tanks at all times, each tank is outfitted with a Dropcam Pro HD, a great tool I recommend for any serious aquarist.

PH in the reef is kept slightly above or below 8.2 (depending on time of day) and in the fish only system is hovers right around 8.15 give or take. Temperature is kept at 77.5 in the reef, and 78.9 in the fish only systems. My reef tank is kept at natural seawater conditions, with a salinity of 1.026 SG, calcium of 440 ppm, alkalinity of 7.5 dKH and a magnesium level of 1280 ppm. Nitrate and phosphate in both my fish only tanks and reef are usually undetectable.

I am in the process of designing a 500-gallon tank that will replace my 220, and the 220 will then replace my 100-gallon cube. The 100-gallon cube will then serve as an additional QT tank. 220 gallons seemed like a lot of water when I bought the tank, but as several of my fish reach into adulthood, it’s clear they will need more swimming room. The design I am focusing on is a drop off tank, allowing for the re-creation of a sandy reef crest, falling off to a rocky deep-water drop off.

Fish health and coral health are often at odds with one another. Corals simply cannot withstand conditions that cure many common fish borne parasites. Advertised “reef safe” remedies rarely work. Even with vigorous QT procedures, I’ve had parasitic breakouts that needed treatment. Having a system that is easy to work in, when keeping marine fish, is vital. Often, to properly treat a parasitic outbreak, fish have to receive daily freshwater dips. Being able to quickly remove décor so that fish can be netted moved to hospital or dipped, is a lifesaver.

Many aquarists don’t favor acrylic. I actually do. It has drawbacks, with the major one being scratches. Being very gentle when working on the tank easily prevents this, and most scratches can be removed via a repair kit. If you opt for an acrylic tank, make sure décor can easily be removed, along with aquatic life. Most reliable scratch removal kits require that the area to be buffed is dry. Having additional systems were fish could be moved during this process is helpful. The material makes up for this by being far lighter than glass and much clearer.