There was a time, not long ago, when Pseudojuloides cerasinus was considered a widespread species occurring all across the Indo-Pacific, from Africa in the west to Hawaii in the east. To be fair, this complex is remarkably homogenous in its morphology across this vast expanse of ocean, but as more data has been collected (both genetic and phenotypic, from diver and aquarium photography) it became obvious that a multitude of geographically restricted species were present.

And so in 1981, John Randall recognized the Mauritian species P. xanthomos and the uniquely colored Marquesan variant P. pyrius. 1995 saw the introduction of P. kaleidos, found in the Maldives and Eastern Indian Ocean, which was followed in 2015 by the description of Africa’s P. polackorum. But this left an unwieldy and artificial classification in which the Indian Ocean populations were highly split, while those in the Pacific remained lumped into one heterogeneous taxon.

Now, at long last, the situation has been resolved with the description of two distinctive new species based on a combination of genetics (CO1) and terminal male coloration. When I reviewed this genus a couple years back, I highlighted these same differences for the populations from Hawaii, French Polynesia, and the remainder of the Pacific. The true P. cerasinus is now considered to be a Hawaiian endemic (and, with collection of aquarium fishes now halted in the region, this one is no longer available to aquarists).

The newly minted Polynesian Pencil Wrasse (P. polynesica) is easily recognized for having a single blue stripe present behind the eye, none on the snout, and a pair of black spots in the dorsal fin. This species has on rare occasion been exported for the aquarium trade, specimens of which appear to lose some of their usual coloration, taking on a pale beige and yellow coloration. However, a blurry photo included in its description illustrates the male coloration is normally far greener, much like what we see elsewhere in the Pacific. To date, it is definitively recorded from French Polynesia and the nearby Cook Islands. Similar specimens are also reported from Kiritimati in the Line Islands, but comparative genetic data is lacking. This might be the same fish, or, as with Chaetodon declivis and Dascyllus auripinnis, it could be another microendemic Polynesian species waiting to be described.

And that leaves the remainder of the Pacific, from Japan to Australia, plus Melanesia and Micronesia, as home to the new Splendid Pencil Wrasse (Pseudojuloides splendens). This, as it turns out, is the fish most abundantly available through the aquarium trade… NOT P. cerasinus, the Hawaiian endemic. In fact, the type specimens were sourced from Vanuatu by none other than Grant Norton of Sustainable Reef Suppliers. The species can be easily diagnosed thanks to the double stripe present behind the eye. And, with that, it seems that the saga of the cerasinus complex has come to a close (probably). Ex uno plures Pseudojuloides. 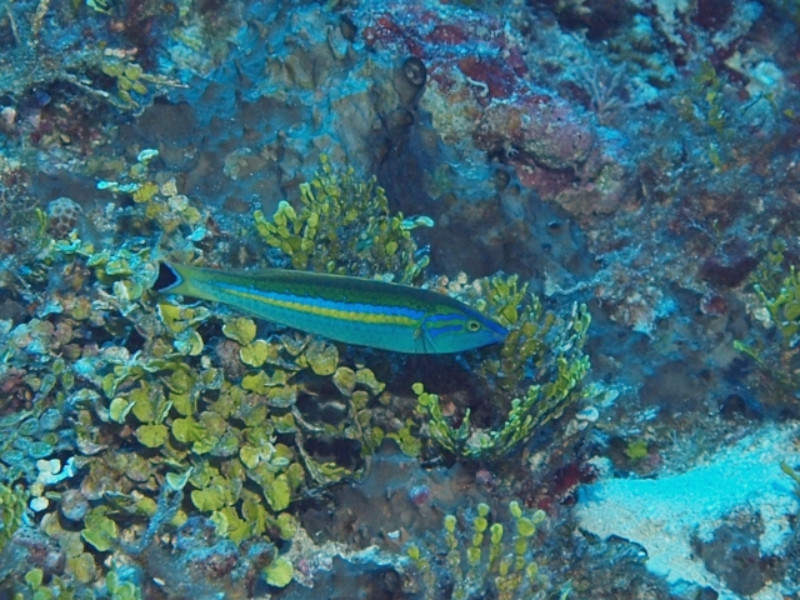 Splendid Pencil Wrasse from Saipan in the Mariana Islands. But is this truly P. splendens? Consider the endemic nature of Chaetodon flavocoronatus and the undescribed Dascyllus endemic to this region… both of these belong to complexes identical in biogeography to these pencil wrasses. Hmm… Credit: acetomato